Accessibility links
Profiling History's Troublemaking Women, French Cartoonist Gets 'Brazen' Pénélope Bagieu's curly, pretty style is sometimes in conflict with her material; it works well when her "rebel ladies" meet happy ends, but she struggles to depict the hardships many suffered. 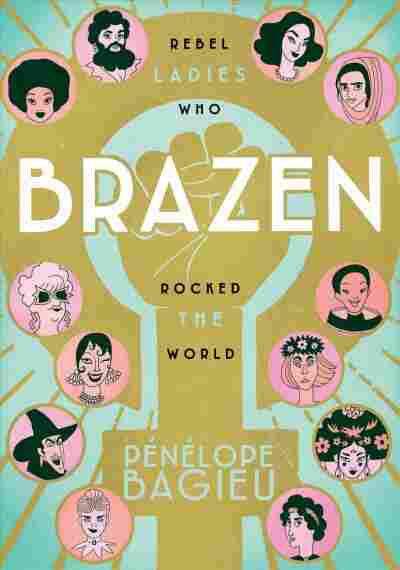 Rebel Ladies Who Rocked the World

by Pénélope Bagieu and Montana Kane

Reading Brazen, French artist Pénélope Bagieu's cartoon celebration of rule-breaking women, I kept thinking about the feminist uses of cuteness. Not kittens-and-puppies cuteness, but the kind of cuteness associated with femininity — and not, usually, with feminism. Bagieu's brand of feminism comes with frills and curlicues galore. Her voice is pert and saucy, and her cartoons are darling.

Alas, though, the radical acts of "rebel ladies" she chronicles haven't always had cute consequences. This painful but indubitable truth grates perpetually against Bagieu's natural register. Brazen is at its best when Bagieu's ladies are shielded from physical violence and meet happy ends: Artist Tove Jansson, astronaut Mae Jemison, swimmer Annette Kellerman and ancient gynecologist Agnodice are all ideal subjects. Her curly, pretty line is unexpectedly perfect for the life of underappreciated 1970s singer/songwriter Betty Davis. Under Bagieu's pen, the intimidatingly raunchy Davis is strong but girly.

On the other hand, when Bagieu is forced to depict real hardship — the abuse and violence that marked the life of Liberian activist Leymah Gbowee, or the torture endured by the Dominican Republic's Mirabal sisters — she's daunted. She inevitably restricts such darkness to a couple of cramped panels, and when she must draw suffering faces, they're unconvincing. She doesn't illustrate Apache warrior Lozen's death from tuberculosis in a prison camp, but merely describes it. She gives no sense of the real danger Syrian activist Naziq al-Abid faced in fighting for women's rights. She even draws one of the Mirabals blowing bubblegum while standing in a police lineup.

'Brazen' is at its best when Bagieu's ladies are shielded from physical violence and meet happy ends.

Actually, that bubblegum is a pretty good symbol for Bagieu's whole mindset. It represents a strategy that women use to navigate the shoals of patriarchy every day, and of which this book is a prime example: Stand up to oppression, but do it in a soft way. Disarm tyrants with sneaky charm. Be like Josephine Baker, who played the socialite to spy for the French Resistance, or Christine Jorgensen, whose beauty and style got everyone talking about transgender identity in the 1950s.

This strategy isn't wimpy or illegitimate — it's still the only one possible for many women around the globe — but unfortunately, it's also not reliable. All the beauty and savvy in the world didn't keep many of this book's heroines from being abused, thwarted, murdered or simply ignored. Only consider Hedy Lamarr, whose status as a movie queen actually worked against her attempts to get her numerous inventions recognized by the military (they suggested she promote war bonds). Her work on radio frequencies pointed the way to Wi-Fi, but it wasn't until 1996 that anyone honored her contribution to scientific history. She sent her son to accept the Electronic Frontier Foundation's award because she was afraid of showing how she'd aged.

Bagieu does understand the tension between her own approach and the more direct ones of some of the women she draws. She goes big at regular points throughout the book, in sprawling two-page illustrations for each of her subjects. The colorblocked panoramas dramatize real or imagined moments in the women's lives. In one, a heroic Nzinga (queen of Ndongo and Matamba in the 1600s) gazes wrathfully down a mountainside at a Portuguese ship. In another, Wu Zetian (empress of China from 690 to 705) tosses the heads of her enemies off an elegant arching bridge. Volcanologist Katia Krafft is a tiny, brave silhouette amid towering fires.

These emphatic compositions couldn't be more different from the comics that make up most of the book. And yet taken together, the two styles stand in a funny kind of balance. Bagieu may be naturally cute, but she knows cuteness isn't the only approach for women navigating patriarchy. There are as many strategies as there are women in this book — or in the world.