Accessibility links
Iannucci's 'The Death Of Stalin': Amid Chaos, Great Energy Armando Iannucci directs this lacerating, frenetic dissection of the power vacuum left by Stalin's death. The director "never overtly winks at current parallels East or West. He doesn't have to."

Iannucci's 'The Death Of Stalin': Amid Chaos, Great Energy

Iannucci's 'The Death Of Stalin': Amid Chaos, Great Energy 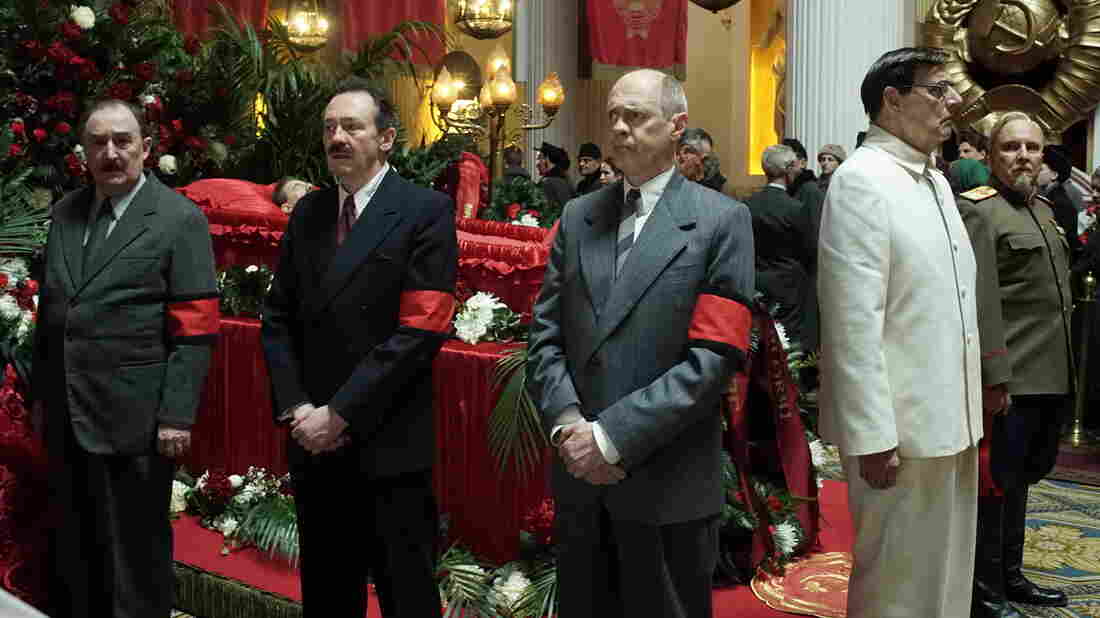 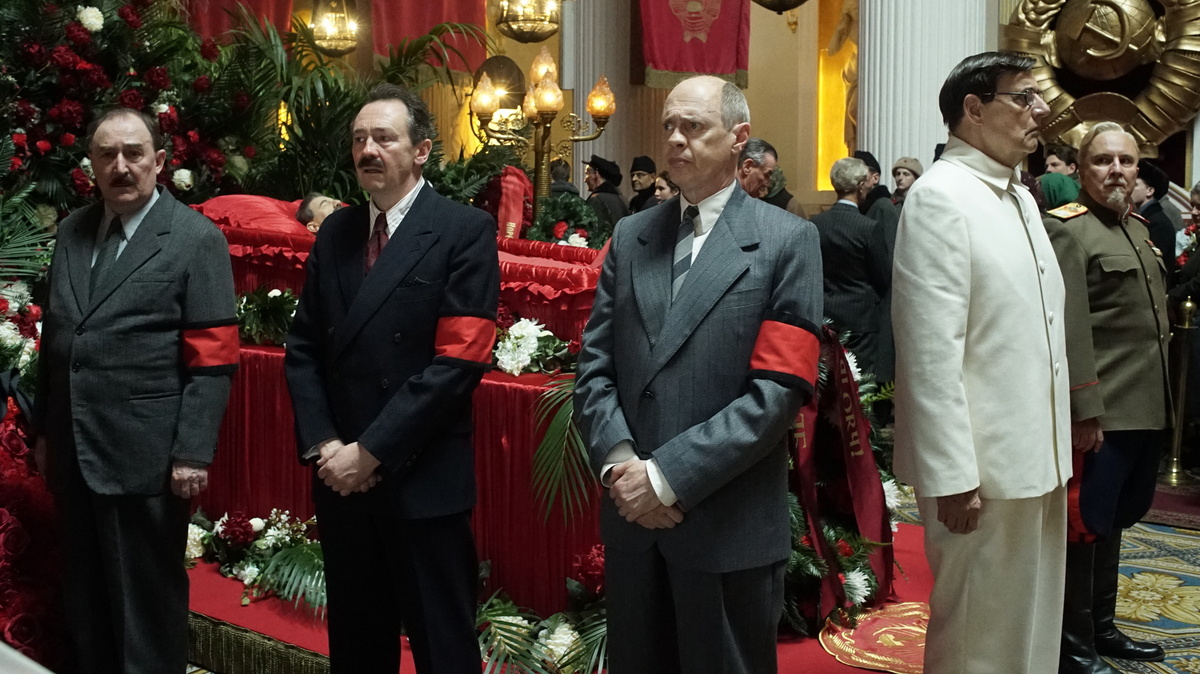 Stalin's Dead and Red in The Death of Stalin. L to R: Dermot Crowley as Kaganovich; Paul Whitehouse as Mikoyan; Steve Buscemi as Krushchev; Jeffrey Tambor as Malenkov; Paul Chahidi as Bulganin.

Nobody shuts up for a nanosecond in The Death of Stalin, a wickedly gabby black comedy about the noxious power vacuum that followed the Soviet dictator's sudden collapse from a stroke in 1953. We've come to expect untamed banter from director Armando Iannucci, creator of In the Loop and Veep, who, with his frequent collaborators David Schneider, Ian Martin and Peter Fellows, adapted The Death of Stalin from two French graphic novels by Fabian Nury and Thierry Robin. There's no plot as such, only a posse of the dead ruler's lieutenants trading jibes, insults, and wasn't-he-great bromides in dialogue studded with the kind of tart, loopy one-liners that littered Veep and In the Loop.

Here, too, the subject is the hunger for power and the crazed mechanics of political process in crisis, but the terrain shifts from our own creaky, leaky Western democracies to the last gasp — maybe — of one of the two most brutally efficient autocracies of the 20th century. The year is 1953 and Joseph Stalin — a coarse fellow who loves dirty jokes as much as he loves Mozart and is played in broad Cockney by Adrian McLoughlin — has arbitrarily dispatched millions of his own people over a period of twenty years. Twenty minutes in he's felled by a stroke after a possibly dissident concert pianist (Olga Kurylenko) slips him a scalding note in the sleeve of a recording of her recital.

So effective has Stalin been at playing divide-and- rule with his own Politburo that the two days following quickly devolve into chaotic farce, with his minions panicking wildly as they vacillate over whether to keep his reign of terror oiled or seize the day to loosen things up a mite. A funeral is planned and executed. Mostly, though, they jockey for power and try to stay off the swelling roster of the condemned.

'In The Loop' With Armando Iannucci

Iannucci has put together a crackerjack ensemble from both sides of the Atlantic, all mercifully freed from assuming the fake foreign accents that make so many action movies set in Russia sound like Monty Python knockoffs, and all playing characters at once monsters and ordinary people. Jeffrey Tambor is wonderfully hapless as Malenkov, an image-conscious bumbler and Stalin's successor were it not for the sneaky wiles of one Nikita Krushchev (Steve Buscemi), a seemingly clumsy clown who shows up for a crisis in his jammies. Jason Isaacs has a ball as the crude general Zhukov, flush with medals and hell-bent on replacing Stalin's notorious NKVD enforcers with the equally brutish army. And Andrea Riseborough brings simmering hysteria to a minor role as Stalin's daughter Svetlana, a Nervous Nellie whose ingenuous belief in her father and in the system leaves her and her drunken lout of a brother, Vasily (Rupert Friend), open to manipulation by all comers.

But the movie's star is the Shakespearian actor Simon Russell Beale as Beria, the sociopathic architect of Stalin's death machine. Expertly wheeling between total stitch and holy terror as he searches for new victims to add to his infamous list of candidates for imminent knockoff, Beria and his roster propel the movie's bitter running joke — the creation of a climate of insanity in which no one knows from one minute to the next what's real and what's fake news or, more frightening yet, no news.

At a little under two hours, the movie's endless stream of clever one-liners can get exhausting. Half an hour into The Death of Stalin, I began to fantasize about locking Iannucci in a room with his American counterpart Aaron Sorkin and letting the two of them clout each other over the head with subordinate clauses until the best man wins or they both fall face-first onto their keyboards.

Yet though The Death of Stalin is a one-joke movie about how plotting and pandemonium invariably pour into a leadership vacuum, it's a deadly serious joke that we'd do well to attend to. Iannucci has said that some of the movie's most farcical scenes were taken from real life, but he never overtly winks at current parallels East or West. He doesn't have to. We know the real-life outcome of this mad interregnum, in which Krushchev crept up quietly, snatched the reins from the bumbling Malenkov and tinkered with reforms while retaining central power. At the close, though, when Krushchev fails to notice a dour apparatchik, name of Brezhnev, quietly biding his time, The Death of Stalin reminds us that if Nature abhors a vacuum, so, too, does another despot-in-waiting.