Accessibility links
Review: Hot Snakes, 'Jericho Sirens' On its first new album in 14 years, Hot Snakes delivers a collection of 10 bent and bruised punk songs alive with the sound of an itch impossible to scratch. 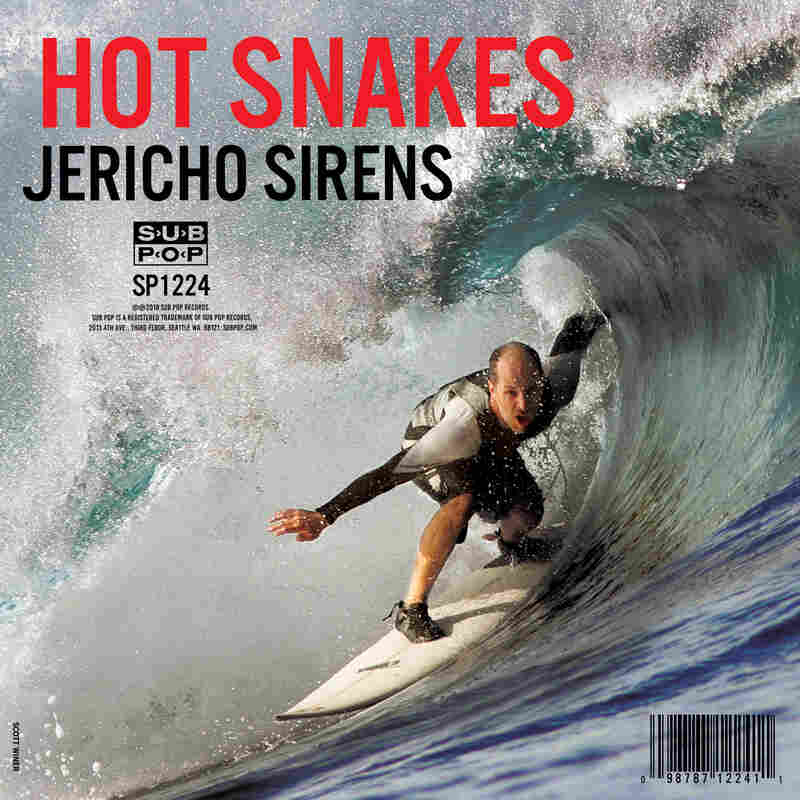 Is it fair to say that punk, however you define the term, has gone through a crisis of cultural placement since the turn of the century? With the integration of poptimism, music for the strange-of-heart has, arguably, drifted away from raw guitars and caterwauls, folding their sensibilities into forms previously reconciled to mainstream radio. (See: SOPHIE, or the dour postures of SoundCloud rappers.) But the clutching of punk as a talisman of self-protection to ward off the lamestream was, in many ways, always a posture, right? So what you're left with, really, is what was always there anyways: the sound of kicking against.

On its first full-length in nearly 14 years, Hot Snakes — singer and guitarist Rick Froberg, guitarist John Reis, drummers Jason Kourkounis and Mario Rubalcaba, bassist Gar Wood — have piled 10 songs into their arms and sidled up to throw them at our feet, bent and bruised.

On its three previous records, the group was willing to toy with sustain and release, tension and construction — look at songs like "Suicide Invoice" or "Lovebirds." Those days are gone. Jericho Sirens is a punched-in wall. Between the doom of the opening bars to "I Need a Doctor" and the homage the record closes on ("Death of a Sportsman" crash-ends with a direct lift from Suicide's epochal, nihilistic "Ghost Rider" and that song's four-note spine) lives the sound of not being able to itch your pox. Ever. Don't take my word for it — as John Reis put it: "I have this continuous need to have my head filled with noise — specifically, the noise I make."

Reis and Froberg's roots in post-rock and post-hardcore — yes, these genres' distinctions get insufferable fast — can be traced to their earlier band, Drive Like Jehu. But also Rocket From The Crypt, the Froberg-less band that John Reis has fronted since 1990. Hot Snakes shares those genetics, along with the output of Recess Records — Swing Ding Amigos in particular — and the Denton, Texas scene typified by Marked Men and Radioactivity. But maybe they'd resent the comparison. Hot Snakes go deeper, literally; their rhythm section and low-end are some of the best that punk has produced since they debuted in 2000 with Automatic Midnight.

Part of the appeal here, particularly for a punk band, is the fact that Froberg's lyrics aren't comprehensible most of the time; they operate as a kind of expressionist splatter of spittle, a fragmentary philosophical rage, across the band's relentless, bubbling-hot canvas. They've been up to it for a minute: The body-perfection lament "Think About Carbs" and the depression reckoning "Suicide Invoice" are examples from Hot Snakes' mid-aughts output (and two of the more easily understood of their whole catalog). Froberg's voice, delivering his new images — "I need a new / Death doula" and "You know I was breastfed on the scaffold, baby" — is high and serrated; it sounds mad, sure. Engaged, maybe. But aloof, mostly. One line in particular, the close of "Candid Camera," captures the detachment: "I'd like to be wrong / But / We'll / See."