Accessibility links
Statehouses Have A Ways To Go To Accommodate New Moms In Virginia, a new class of state lawmakers includes mothers of young children. The delegates are finding a workplace not as accommodating as they would like. 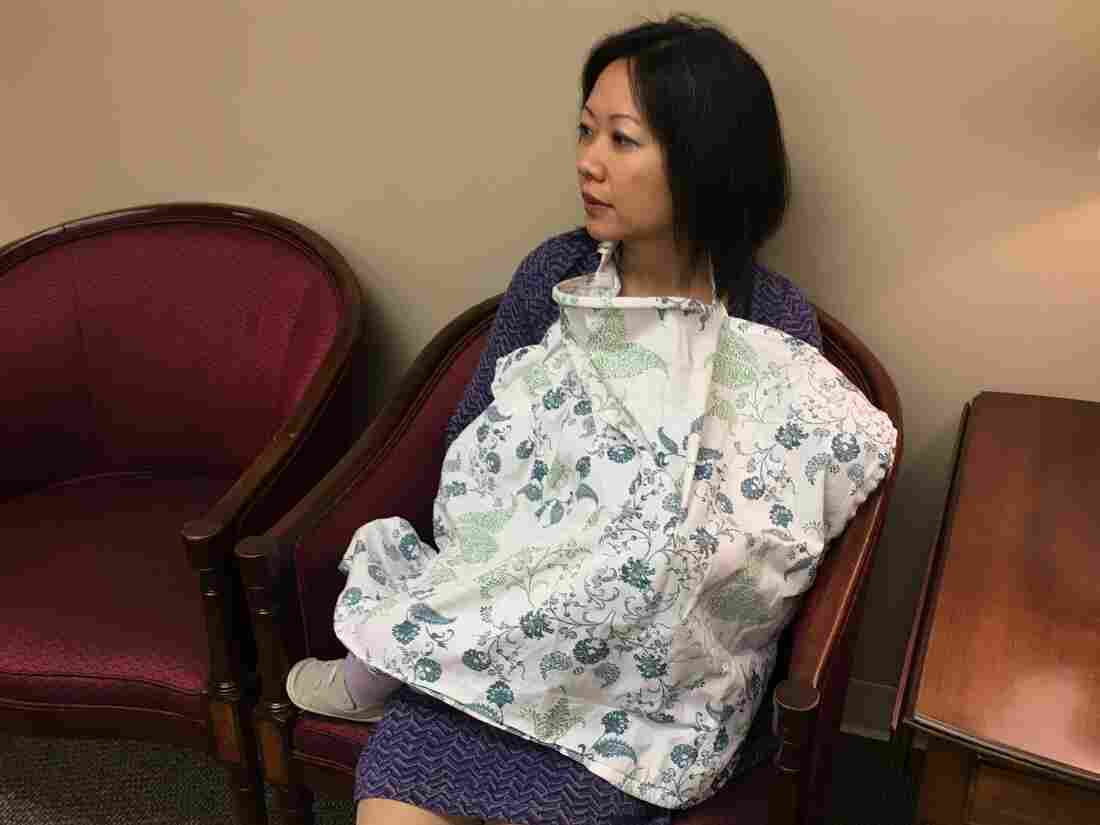 Virginia Del. Kathy Tran often brings her baby to work and has breastfed on the House floor in Richmond. Sarah McCammon/NPR hide caption 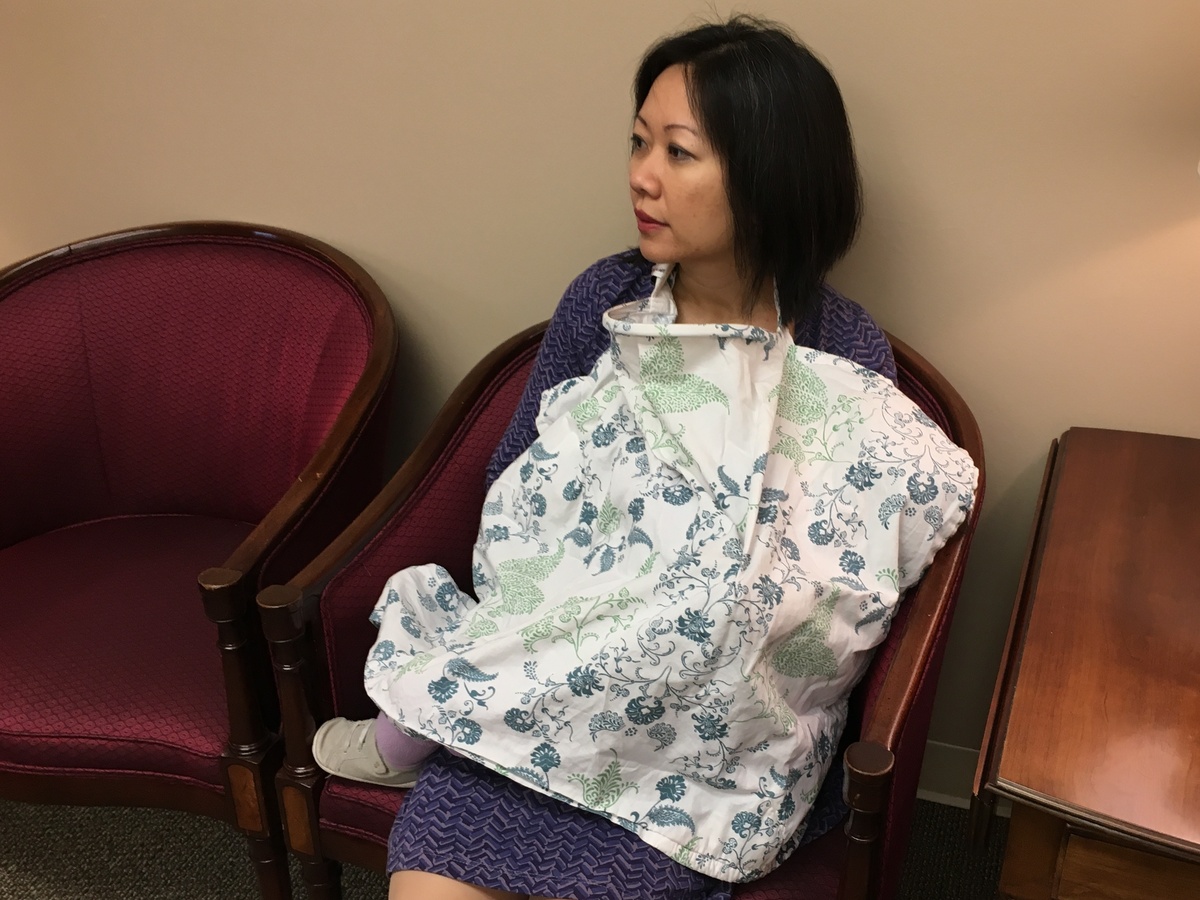 Virginia Del. Kathy Tran often brings her baby to work and has breastfed on the House floor in Richmond.

For Kathy Tran, the decision to breastfeed her daughter on the floor of the Virginia House of Delegates was simple.

"I had a baby that was hungry and I needed to feed her," Tran says. 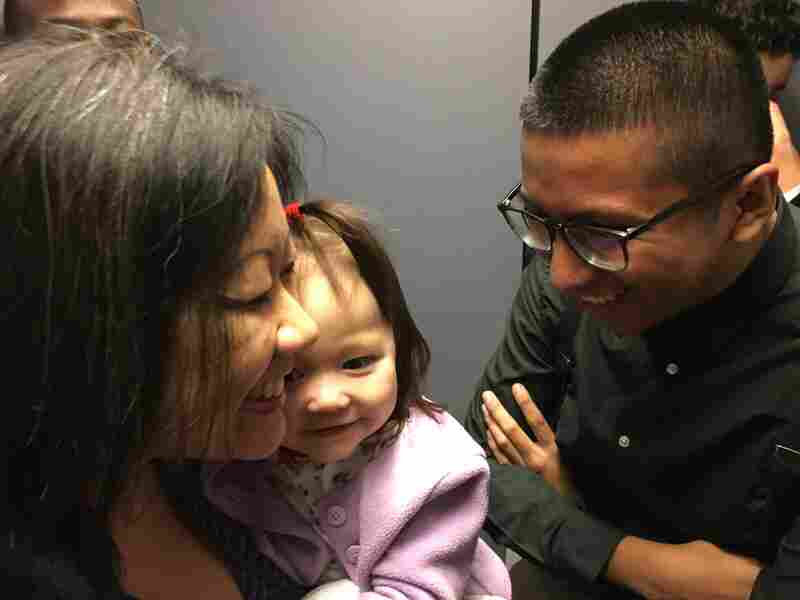 Del. Tran gets help from her staff, including Rodrigo Velazquez, who says he enjoys playing with Tran's baby when the delegate is busy. Sarah McCammon/NPR hide caption 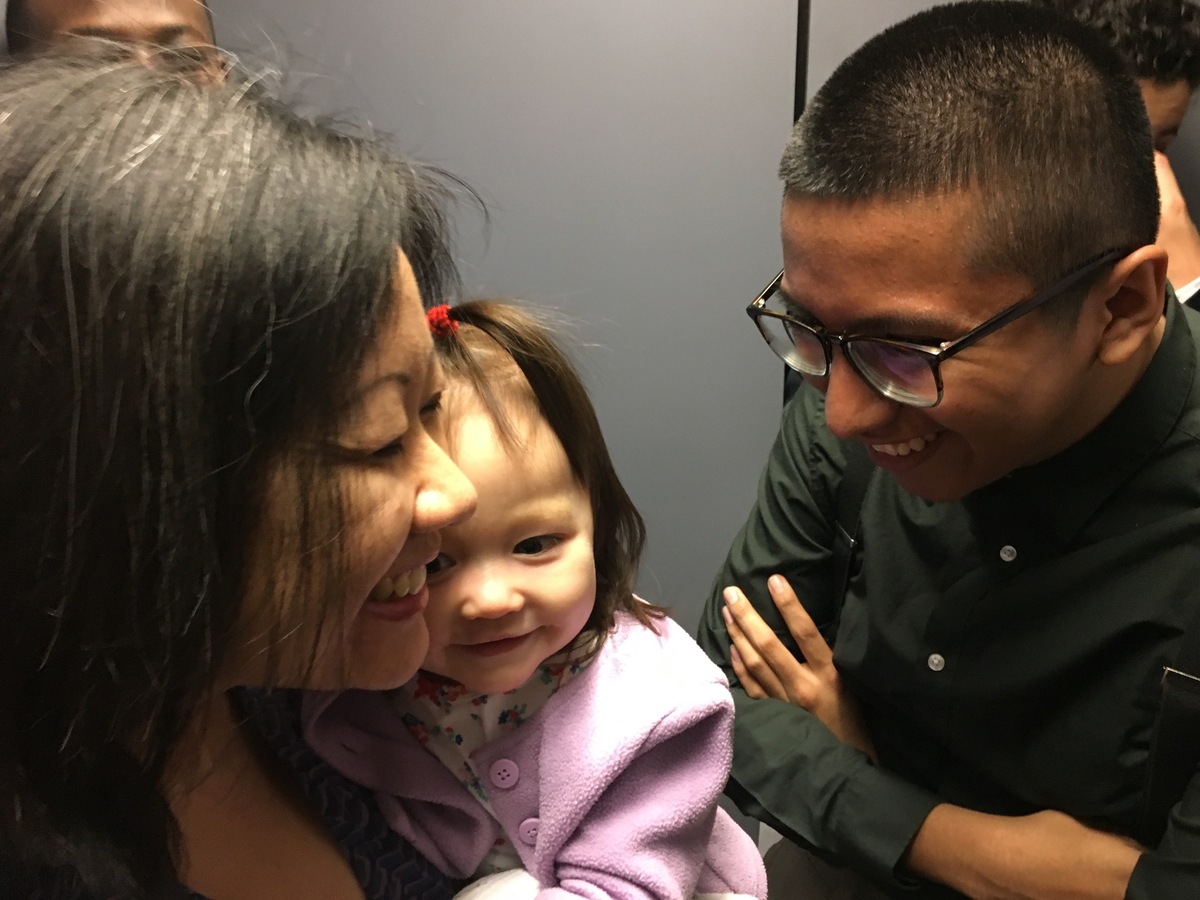 Del. Tran gets help from her staff, including Rodrigo Velazquez, who says he enjoys playing with Tran's baby when the delegate is busy.

Tran is by all accounts the first Virginia state delegate to breastfeed on the floor of the Virginia House of Delegates. Since taking office in January, she's been juggling daycare and feeding schedules around meetings and late-night votes. She often ducks her 13-month-old under a nursing cover and continues on with her business.

Tran has been a working mom before; her older three children stay in northern Virginia with her husband while she's in Richmond. She was elected in November 2017, in the first wave of women to run for office after President Trump's election.

Tran says she made the decision to run when her youngest was a month old.

"So she was with me throughout the entire campaign. We did a lot of door knocking together," Tran says.

Her colleague, Del. Jennifer Carroll Foy, learned she was pregnant two weeks after announcing her own candidacy in early 2017. She says she was motivated to oppose President Trump's agenda, and finding out she was expecting a baby – twins, as it turned out – did not deter her.

"I knew that, you know, no matter what I thought, no matter what I had going on, this was so important. Because there needed to be a response and counterbalance to what he was bringing to the table," Carroll Foy says.

Family and friends helped her campaign through a difficult pregnancy that included bed rest and preterm labor. Carroll Foy and her husband are now parenting two healthy baby boys while she travels about an hour between her district and Richmond. 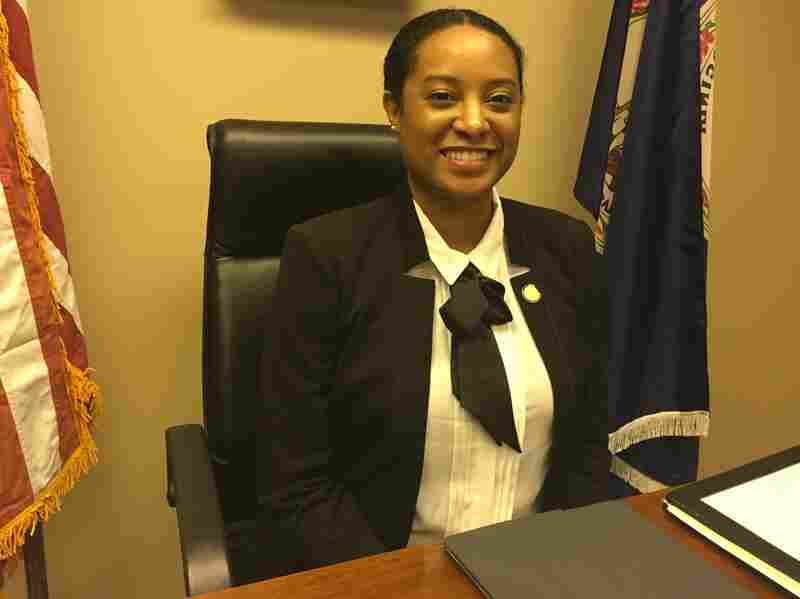 Del. Jennifer Carroll Foy campaigned through a difficult pregnancy with twins and was disappointed to find accommodations like lactation rooms and changing tables lacking when she got to Richmond. Sarah McCammon/NPR hide caption 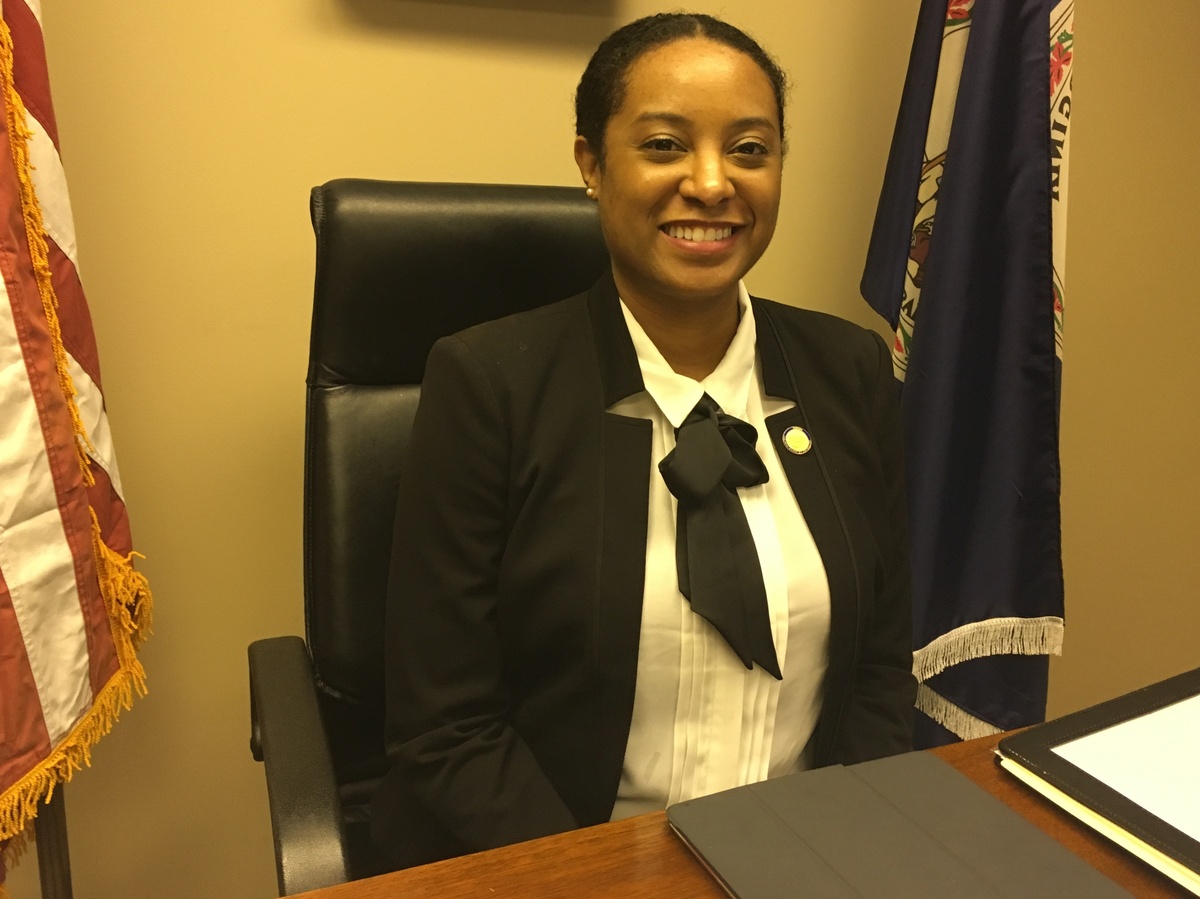 Del. Jennifer Carroll Foy campaigned through a difficult pregnancy with twins and was disappointed to find accommodations like lactation rooms and changing tables lacking when she got to Richmond.

"I was very disappointed to come down to the General Assembly and find that there aren't nursing rooms readily available," she says. "There aren't baby changing stations in the women's bathroom. We can't say that we want to be family-friendly, and that we want women to run for office and be successful and be great legislators when we're not doing things to help accommodate them as much as we possibly can."

Paul Nardo, Clerk of the Virginia House of Delegates, says he and others in charge of managing the grounds are looking at ways to accommodate young parents, especially nursing mothers. It's a slow process, he says; the House chamber didn't even have a women's restroom until a renovation completed in 2007.

The historic nature of the Virginia Capitol doesn't help.

"We're cramped for space in this office, to be honest, so having a dedicated room – everything's sort of spoken for, so we have to kind of retrofit and work around that," Nardo says.

For now, Nardo says two lactation rooms have been set aside in a nearby legislative office building.

"Having gone through the first session with this many women of child-bearing and –rearing ages, we're working through it," Nardo says.

While Democrats Tran and Carroll Foy are newcomers, other female lawmakers before them have had to navigate similar challenges, one at a time.

In 2008, Republican state Sen. Jill Vogel was the first Virginia state lawmaker to have a baby while in office. She remembers slipping away to pump breast milk, then sending it to her office with a Senate page.

"They had no idea what they were delivering," Vogel says with a laugh.

Vogel says the work culture around politics has lagged behind the private sector in accommodating working moms. She says she often gets asked how she can be both a mother of six and a legislator – a question her male colleagues are less likely to face.

"In a private sector job, you wouldn't think twice; you'd say 'Of course I can do both and be competent at both,'" she says. "So I didn't apologize."

State Sen. Jennifer McClellan, a Democrat, was a state delegate in 2010 when she had her first child. She asked to borrow an empty office when she needed to pump, and she now offers her own office to staffers, lobbyists, and any other new moms at the Capitol who might need a space to pump.

"I even made a sign that had a picture of a cow that said, 'Do not enter,'" McClellan says with a laugh. "And it was like, you know, don't ask questions when you see that, just don't come in."

McClellan says it's important to accommodate young mothers in politics, in part because of the perspectives they bring to issues like education and childcare.

"You get a different perspective once you are living that life." McClellan says.

It's a relatively new challenge; women have long been under-represented in elected office. It was just this year that the nation saw 25 percent of state legislative seats held by women.

Katie Ziegler, program manager for the Women's Legislative Network at the National Conference of State Legislatures, says women with children have historically waited to run until later in life.

"It has been much less common for women to run and serve with infants and toddlers," Ziegler says, "and we've seen that in how few state legislatures and capitol buildings have fully figured out how they will accommodate nursing mothers."

Ziegle says some capitol buildings are beginning to make accommodations, and more will need to do so as women are elected in greater numbers.

Multiple groups around the country are working to elect more women in the 2018 midterm elections.

Erin Loos Cutraro founded the nonpartisan group She Should Run, which is now part of a coalition dedicated to electing women of all stripes. She says bringing more women into public life will change both public policy and the workplace culture around politics.

"It's not terribly surprising that many of these conversations around how to make the governing workspace more welcoming to new moms are, 'That's a new conversation!'" she says. "But everything changes when we add women to the equation. We get a stronger democracy. We get stronger policies. And so I think we are absolutely going to have to change the way we do business."

That change includes the U.S. Capitol, where this spring Sen. Tammy Duckworth, D-Ill., will be the first sitting senator to give birth in office. She says there's no precedent for maternity leave in the Senate, and that her situation illustrates the importance of having a full range of women's experiences reflected in the lives of those who represent them.

"I'm one person facing this here in the Senate," Duckworth told NPR. "But...there are women all across this country who are facing starting their families and there's no policy for them either – and they're not United States Senators and get the attention that I'm getting."