Accessibility links
Trump Formally Orders Tariffs On Steel, Aluminum Imports President Trump's order includes exceptions for Canada and Mexico for the time being. The plan has prompted fears of a trade war, and GOP leaders have spoken out against it. 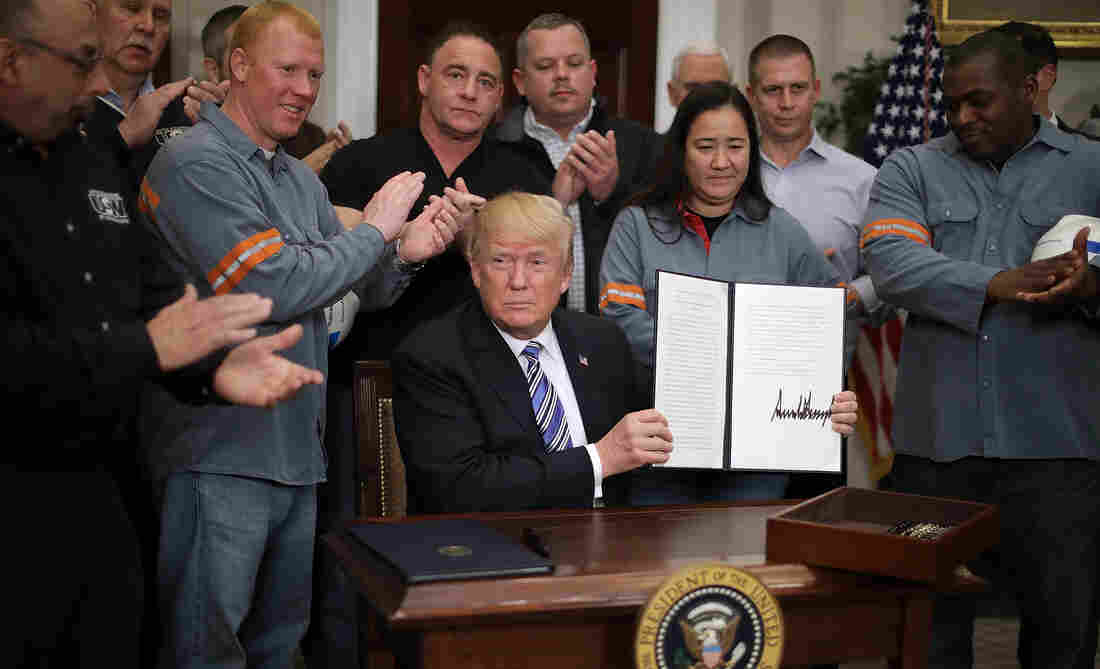 Surrounded by steel and aluminum workers, President Trump holds up the order on steel imports that he signed in Roosevelt Room at the White House on Thursday. Chip Somodevilla/Getty Images hide caption 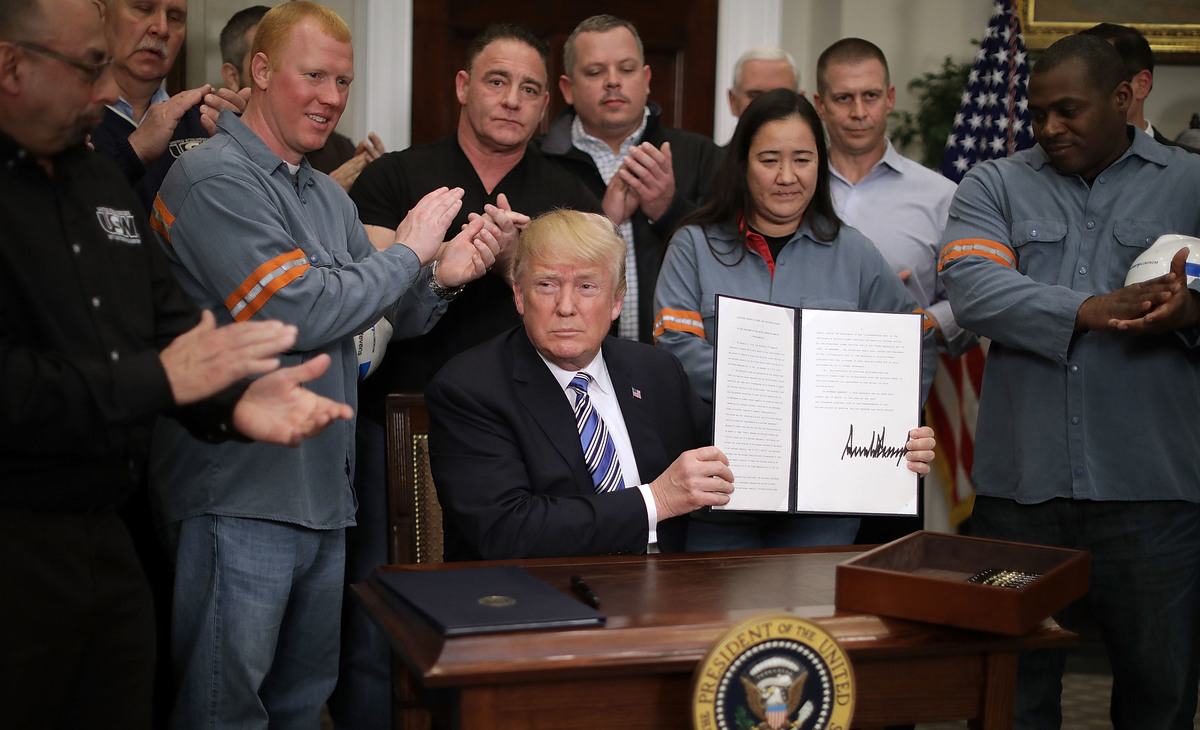 Surrounded by steel and aluminum workers, President Trump holds up the order on steel imports that he signed in Roosevelt Room at the White House on Thursday.

President Trump ordered steep tariffs on imported steel and aluminum from every country except Canada and Mexico. It's the boldest move to date for the president who campaigned on a protectionist platform that is sharply at odds with Republicans' free trade orthodoxy.

"A strong steel and aluminum industry are vital to our national security, absolutely vital," Trump said. "Steel is steel. You don't have steel, you don't have a country."

House Speaker Paul Ryan, R-Wis., issued a statement disagreeing with the administration's approach, arguing instead for "targeted enforcement" against bad trade practices by countries like China.

"I disagree with this action and fear its unintended consequences. I am pleased that the president has listened to those who share my concerns and included an exemption for some American allies, but it should go further," Ryan said. "We will continue to urge the administration to narrow this policy so that it is focused only on those countries and practices that violate trade law."

The president ordered a 25 percent tariff on imported steel and a 10 percent levy on imported aluminum to take effect in 15 days. Although Trump initially wanted to apply the tariffs worldwide, carve-outs were added for Canada and Mexico for the time being. Aides say exceptions could be made for other U.S. allies.

Trump said the order would show "great flexibility and cooperation toward those that are real friends."

"Everybody's just happy," said Mark Goodfellow, head of the Steelworkers Local 420A in Massena, N.Y., where Alcoa employs about 500 people. "It feels like the American worker is getting a break and finally getting a shot to compete on a level playing field."

U.S. Steel announced plans to restart one of two idle blast furnaces in Granite City, Ill., and call back some 500 workers. Century Aluminum plans to invest $100 million in its smelter in Hawesville, Ky., and hire 300 additional workers.

"My father worked in the industry and worked at that plant for 40 years," Dusty Stevens, a superintendent at the Century plant, said at the White House event Thursday. "This hits home for all of us in Hawesville."

Both the steel and aluminum industries have been under heavy pressure from imports. In recommending tariffs or quotas, the Commerce Department noted that employment in the domestic steel industry has shrunk by 35 percent in the past two decades, while the aluminum industry shed nearly 60 percent of its jobs between 2013 and 2016.

"Those are bedrock, backbone industries of this country," said White House trade adviser Peter Navarro. "And the president is going to defend them against what is basically a flood of imports that have pushed out American workers, aluminum smelters. And we can't afford to lose them."

Authority for the tariffs comes from a seldom-used law from the 1960s that was designed to protect domestic industries deemed vital to national defense.

But Defense Secretary Jim Mattis questioned that premise, noting that military demand for steel and aluminum can be met with just 3 percent of domestic production. What's more, unless the U.S. declares war on its neighbor to the north, metal supplies from Canada are not likely to be compromised.

Experts say the real challenge for industry is China, which produces almost as much steel in a month as the U.S. does all year. But the U.S. has already imposed anti-dumping measures against Chinese producers, and relatively little Chinese metal flows directly into the U.S. market.

Hill GOP Unlikely To Act To Counter Trump on Tariffs

"Even though China's overcapacity is weighing down global prices, it's not the direct cause of a loss of our aluminum and steel industries," Navarro said. "The direct cause is simply the foreign steel that crosses our borders. And that is what we must stop."

Critics worry that tariffs will increase costs for businesses and consumers and could spark retaliation from America's trading partners. Republican lawmakers have been urging the White House to adopt a more surgical approach.

"We're on the verge of a painful and stupid trade war, and that's bad," Sen. Ben Sasse, R-Neb., said in a statement. "This isn't just bad for farmers and ranchers in Nebraska who need to buy a new tractor, it's also bad for the moms and dads who will lose their manufacturing jobs because fewer people can buy a more expensive product. Temporary exceptions for Canada and Mexico are encouraging, but bad policy is still bad policy."

Ultimately, it is unlikely that lawmakers will take action to counter the president, despite technically having the ability to do so.

"President Trump is a unique negotiator," Agriculture Secretary Sonny Perdue said this week, as Radio Iowa reported. "Sometimes he keeps people off balance, even his own staff."

Many farmers are heavily dependent on export markets and could be hit hard in a trade war. Asked for his advice, Perdue chuckled softly and said, "Pray."

A previous version of this story described Century Aluminum's Hawesville, Ky., smelter as idle. In fact, the facility has been operating at 40 percent.