Accessibility links
Trump Pits Video Game Makers Against Harshest Critics In Closed-Door Meeting After the Parkland high school shooting, the president said video games are "really shaping young people's thoughts." Then he invited makers of those games to the White House to meet with critics. 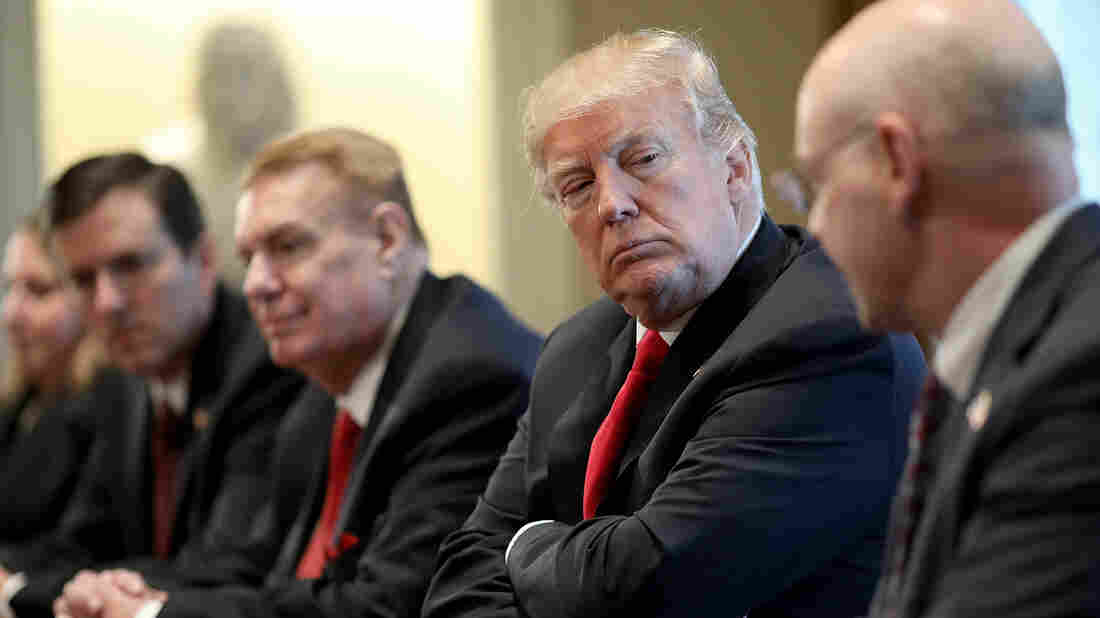 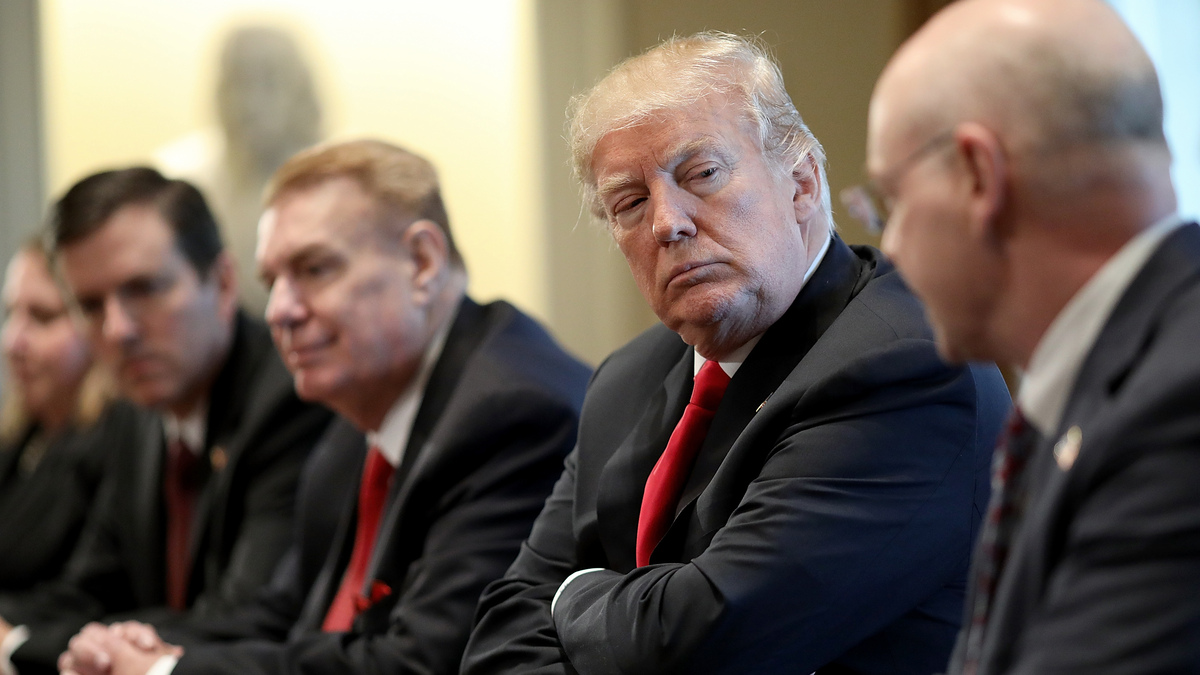 President Trump meets with leaders of the steel and aluminum industries at the White House last week.

Since the Columbine school shooting nearly 20 years ago, the conversation after mass shootings has inevitably included media that depict violence — and the effect on children.

While Democrats focus on gun restrictions, conservatives often home in on music and video games — from Marilyn Manson to Grand Theft Auto — that are sometimes enigmas to parents.

"Unproven and emotionally driven gun control legislation is a common and simplistic response to gun-related tragedies, but such lawmaking usually fails to address the underlying problem," Rep. Vicky Hartzler, a Missouri Republican, wrote in 2013, for example, following the school shooting at Sandy Hook Elementary School in Newtown, Conn. "We must have a meaningful conversation about mental health issues and other possible cultural and societal contributors to violent behavior, such as violence in video games."

On Thursday, that debate is taking center stage once again in the Trump White House.

The president invited executives from the video game industry, including the makers of games like Grand Theft Auto and Fallout, which have some violent themes. Fallout, for example, is a realistic game that has gone through several series and even has a trailer that depicts a post-apocalyptic world following a nuclear blast.

Interestingly, Trump's younger brother, Robert S. Trump, sits on the board of directors for the company ZeniMax Media, which owns Bethesda Softworks, a company that publishes Fallout and other violent games like The Elder Scrolls and Doom.

But in addition to the video game industry, the president also invited some of that industry's harshest critics from Congress, like Hartzler, and outside.

In The White House Cabinet Room, Parallels To 'The Apprentice' Boardroom

"I like conflict," Trump said Tuesday, addressing staff turnover at the White House. "I like people with two different points of view. I like watching it; I like seeing it. And I think it's the best way to go."

It's not the first time Trump has tried a boardroom-style, made-for-TV meeting. Remember, he did it on immigration and guns, and — without a producer or editor — viewers, aka lawmakers and regular Americans, were left confused.

Trump was left backtracking comments he made in the roundtable on guns that indicated he was in favor of overriding due process requirements to take away people's guns.

Thursday's meeting is going without a TV audience.

You need more experience points to unlock that level.

It was marketed similarly to the prior two meetings, but it was switched just hours beforehand to a closed-door session, without the press present.

For all the talk of optics, these issues matter to real people and have the potential to affect their lives. On violent media, for example, the debate is wrapped up in guns and is highly controversial.

He also more pointedly said on Twitter in 2012 that video games are "creating monsters."

Video game violence & glorification must be stopped—it is creating monsters!

So the president is setting up a fight, and it's clear which side he is on. But the scientific community has not come down definitively on whether violent video games cause criminal violence.

On one hand, the American Psychological Association found a link between the games and real-life aggression.

"The research demonstrates a consistent relation between violent video game use and increases in aggressive behavior, aggressive cognitions and aggressive affect, and decreases in prosocial behavior, empathy and sensitivity to aggression," a report by the APA Task Force on Violent Media concluded in 2013.

But that's hardly the end of the story.

"Scientists have investigated the use of violent video games for more than two decades," wrote Mark Appelbaum, the task force's chairman, "but to date, there is very limited research addressing whether violent video games cause people to commit acts of criminal violence."

The industry argues that millions of children play these games, and obviously not all of them commit criminal acts of violence.

In fact, the APA report notes:

"No single risk factor consistently leads a person to act aggressively or violently. Rather, it is the accumulation of risk factors that tends to lead to aggressive or violent behavior. The research reviewed here demonstrates that violent video game use is one such risk factor."

Since then, a study released in January of this year from researchers at the University of York "found no evidence to support the theory that video games make players more violent."

"In a series of experiments, with more than 3,000 participants, the team demonstrated that video game concepts do not 'prime' players to behave in certain ways and that increasing the realism of violent video games does not necessarily increase aggression in game players."

But scientists agreed that more study was needed.

The Supreme Court in 2011 struck down on First Amendment grounds a California law that banned the sale of violent video games to children. Justice Antonin Scalia wrote then that the studies the state used as evidence did "not prove that violent video games cause minors to act aggressively" but that instead the research was based on correlation.

After the Newtown shooting, President Barack Obama also proposed increasing funding for research into violent video games and their potential influence. But the difference is that Obama was also pushing for stricter gun measures, like a ban on high-capacity magazines.

After seeming open to lots of ideas on guns in his last televised meeting — and still appearing to be in favor of certain limitations, like banning bump stocks and raising the age to purchase all guns to 21 — Trump has not pushed for anything of substance yet.

Republican congressional leaders, smarting from what they saw as the president siding more with Democrats, have pushed off gun legislation indefinitely — until they get more clarity.