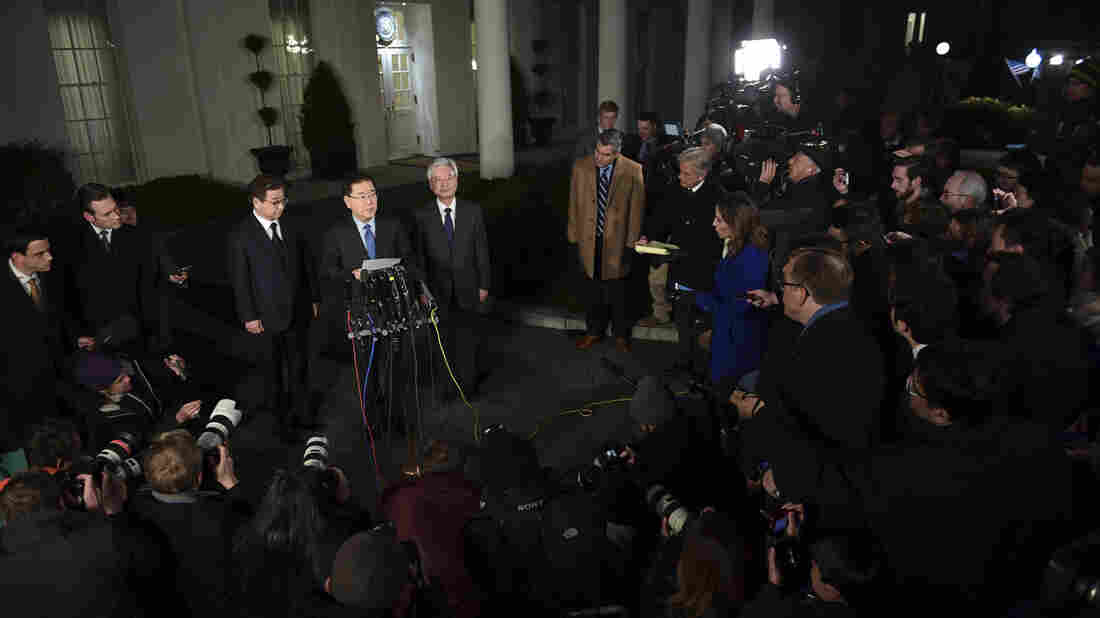 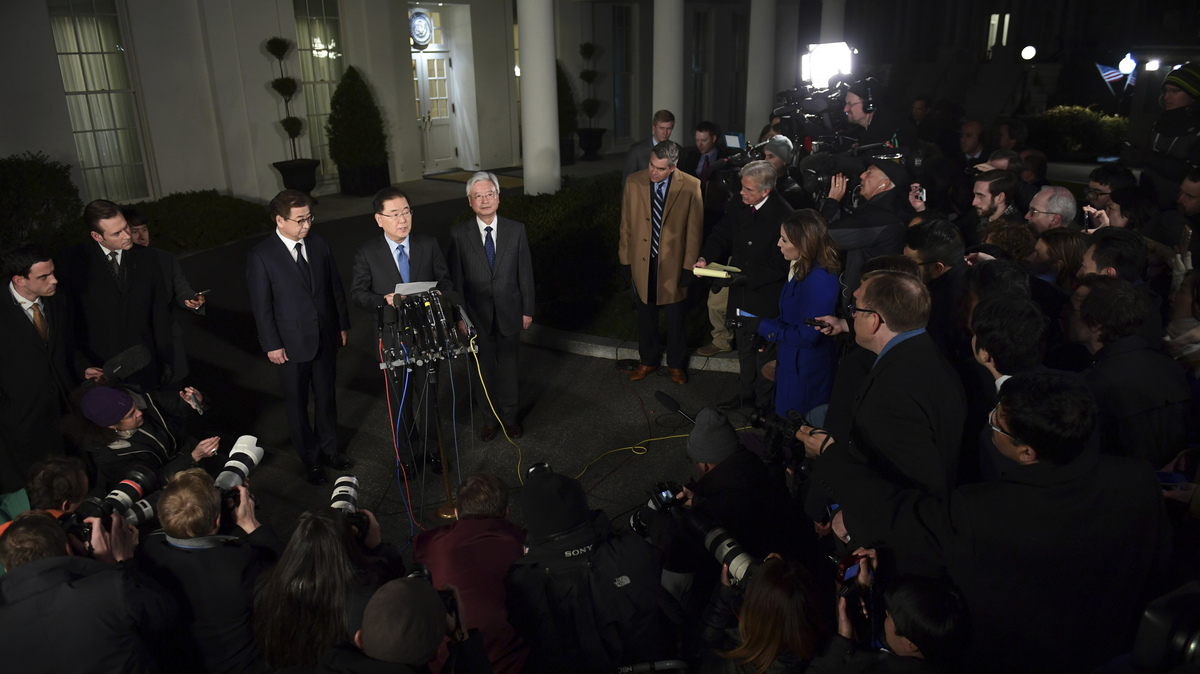 President Trump has agreed to a face-to-face meeting with North Korean leader Kim Jong Un "at a place and time to be determined," White House press secretary Sarah Huckabee Sanders said in a statement Thursday.

The announcement came in response to a stunning invitation from Kim, relayed by South Korea's national security adviser, Chung Eui-yong, who briefed Trump and other U.S. officials on Chung's recent meeting with Kim in Pyongyang.

Any meeting between these two leaders would be historic. The U.S. has no diplomatic ties with North Korea, the countries are adversaries dating to the Korean War and repeatedly traded heated insults last year, including Trump's remarks at the United Nations, in which he vowed to "totally destroy" North Korea if the U.S. was threatened.

"I explained to President Trump that his leadership and his maximum pressure policy, together with international solidarity, brought us to this juncture," Chung said. "I expressed [South Korean] President Moon Jae-in's personal gratitude for President Trump's leadership."

Chung said that during his meeting with Kim, the North Korean leader expressed his commitment to denuclearization as well as his "eagerness to meet with Trump as soon as possible." Kim also agreed to refrain from conducting further nuclear or missile tests during this period, Chung said.

Trump was guarded earlier this week about whether he would be willing to meet with Kim, but Chung reported no such reservations from the president.

"President Trump appreciated the briefing and said he would meet Kim Jong Un by May to achieve permanent denuclearization," Chung said.

A senior administration official confirmed that the meeting is expected within "a couple of months." The location for such a meeting is yet to be determined. Kim Jong Un is not known to have even stepped foot out of North Korea since taking power in 2011, so the location is a huge question.

Trump himself tweeted, "Great progress is being made but sanctions will remain until an agreement is reached."

Kim Jong Un talked about denuclearization with the South Korean Representatives, not just a freeze. Also, no missile testing by North Korea during this period of time. Great progress being made but sanctions will remain until an agreement is reached. Meeting being planned!

South Korea and other countries are approaching this diplomatic overture with caution. "The Republic of Korea, the United States, and our partners stand together in insisting that we not repeat the mistakes of the past," Chung said. "The pressure will continue until North Korea matches its words with concrete action."

Previous U.S. presidents Jimmy Carter and Bill Clinton have met with North Korean leader Kim's father. Other U.S. presidents have been reluctant to agree to any meeting — or even a phone call — with Kim without firm preconditions in order to deny the Kim regime the validation from a global superpower.

While Chung said South Korea is "optimistic" about continued talks, it will proceed with joint military exercises with the United States. Those exercises had been postponed while South Korea hosted the Winter Olympics.

Chung said Kim "understands that the routine joint military exercises between [South Korea and the U.S.] must continue."

Now the planning of a potential summit must begin, and without key diplomats in place. Typically before a head-of-state summit, the details of what will be negotiated are hammered out in advance in a series of working level meetings. The Trump administration just lost a key point man on Korean issues at the State Department and has yet to appoint an ambassador to South Korea. North Korea, meanwhile, has a track record of being extremely deft negotiators.

"They're gonna know the Americans very well, as well as they can," says John Delury, a North Korea watcher and professor at Yonsei University in Seoul. "So President Trump cannot just waltz into this kind of summit. He's gonna need all the resources of the U.S. government expertise, from the military, national security advisors, State Department diplomats who have met with North Koreans. So this is really gonna take a dream team to advise the president so that he doesn't make any mistakes."

Before any high level U.S.-North Korea meeting will happen, South Korea will be busy planning another major summit — Kim Jong Un has agreed to meet with the South Korean President at the inter-Korean border next month.