Accessibility links
The Zombie Amendments To The Constitution You've Probably Never Heard Of They won't eat your brains, but technically, they still could come back to life. Not all the amendments that passed Congress have stood the test of ratification by the states. 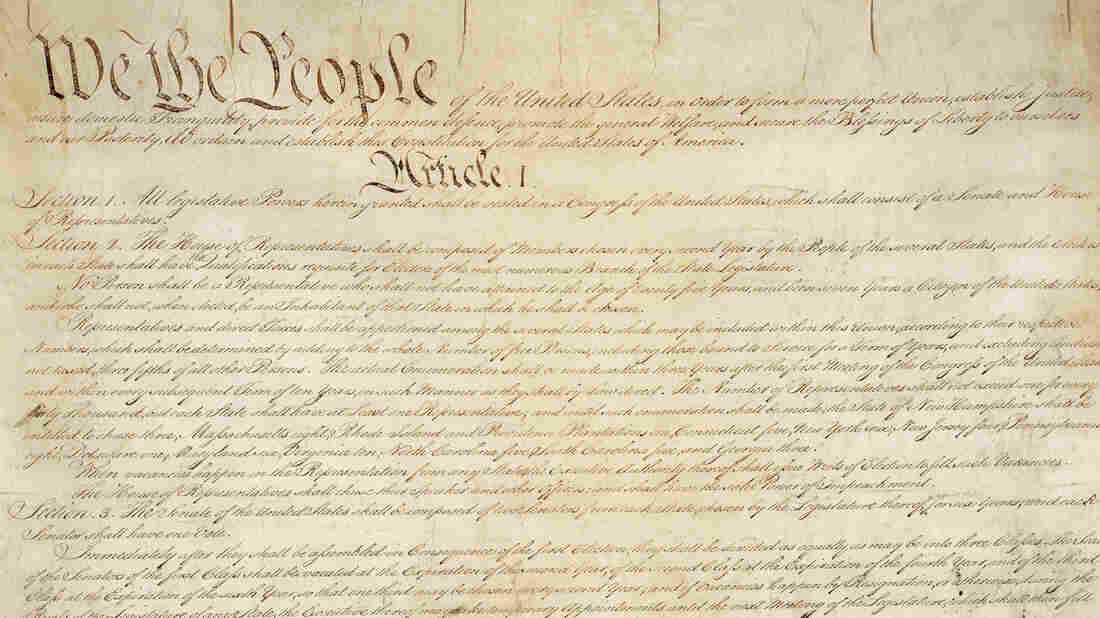 Altogether, the Constitution has only been amended 17 times since the Bill of Rights, and one of those amendments (the 21st) was done just to repeal another (the 18th, known as Prohibition). National Archives via AP hide caption 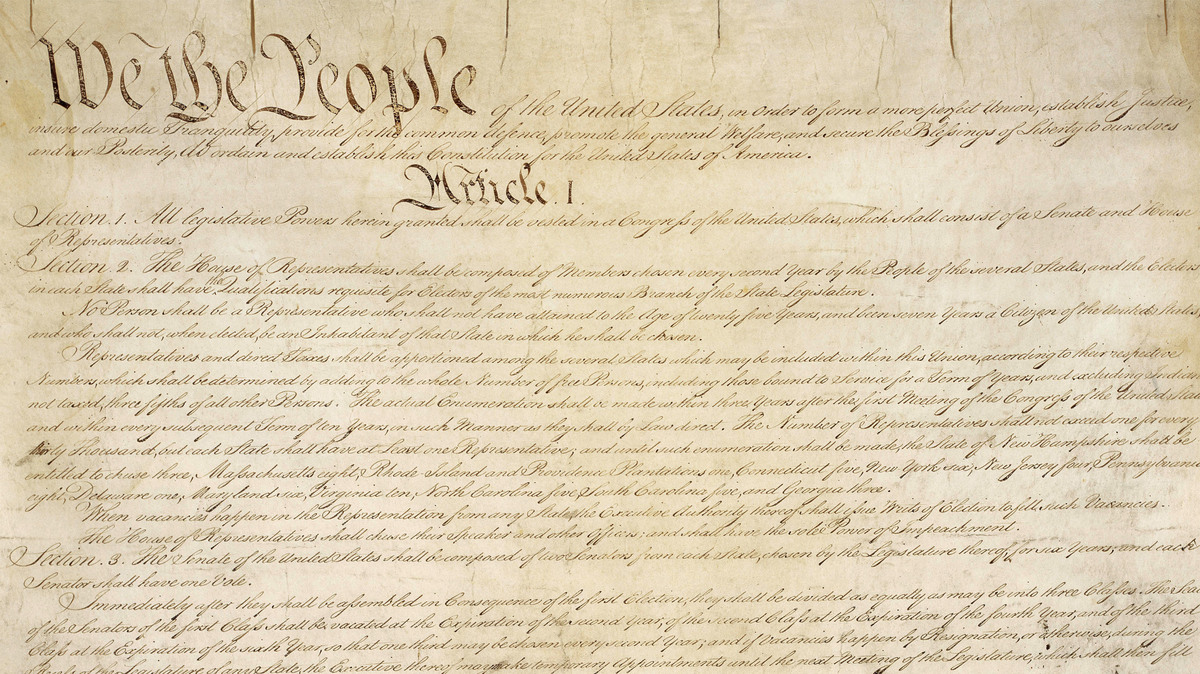 Altogether, the Constitution has only been amended 17 times since the Bill of Rights, and one of those amendments (the 21st) was done just to repeal another (the 18th, known as Prohibition).

The first 10 changes to the Constitution were easy. Since then, it has been an uphill battle every time, and some of those battles are, at least technically, still undecided.

We are speaking of the amendments to the U.S. Constitution, and those first 10 are, of course, better known as the Bill of Rights.

They provide some of the most important guarantees of freedom associated with the U.S. Constitution — even though they were added years after the Constitution was first written in the summer of 1787.

It wasn't that the framers of the Constitution didn't believe in freedom of the press or freedom of religion — or the right to own guns or have a fair trial.

But many, including influential framer James Madison, believed these rights were implicit in the Constitution itself (and in the constitutions of the individual states). Madison and others considered a separate catalog of rights unnecessary and potentially troublesome because of what it might omit.

In the process of ratifying that new Constitution 230 years ago, the founders got some pushback from the states. There was popular demand for spelling out citizens' freedoms and rights explicitly — so as to make them as clear and inviolable as the Constitution itself.

So, when the first Congress met in 1789, Madison himself (a member of the House from Virginia) brought forth a package of 12 amendments — formally introduced just six weeks after George Washington had taken the oath as the first president.

These "further declaratory and restrictive clauses" were soon passed with two-thirds votes of the House and the Senate. Ten of these were ratified in short order by the states, making them part of the Constitution as of Dec. 15, 1791. But two of Madison's original dozen were left behind, failing to get the three-fourths of the states of the time.

One provided a formula for determining the number of seats in the House of Representatives, and the other said that congressional pay raises could not take effect until after the next election for the House.

These became what might be called orphan amendments, abandoned partway through the process. But Congress had included no expiration date on them, so they could also be called zombie amendments — kept in a suspended condition indefinitely, neither finally dead nor fully alive.

In fact, one of those two early amendments, the one about the pay raise, actually came back to life. It was dusted off in the late 1980s — in the midst of a fracas over congressional pay — and states once again began voting on its ratification. Lo and behold, the necessary 38 states signed on, and, in 1992, the amendment that Congress had blessed way back in 1789, was finally ratified.

It is now the 27th Amendment to the Constitution, the last (or at least most recent) of the amendments and one of only two added in the past 50 years.

Altogether, the Constitution has only been amended 17 times since the Bill of Rights, and one of those amendments (the 21st) was done just to repeal another (the 18th, known as Prohibition).

Five amendments have dealt with presidential succession, elections or terms in office. A flurry of amendments after the Civil War abolished slavery, guaranteed equal protection under the law and banned racial discrimination. A successor amendment in the 1960s banned the poll tax, often used to keep African-Americans from voting in states that once had slavery.

Other momentous amendments have granted women the right to vote (19th), lowered the voting age to 18 from 21 (26th), imposed the income tax (16th) and provided for the direct election of senators by the voters rather than by state legislatures (17th).

The Equal Rights Amendment that still hasn't been

But not all the amendments passed by Congress have stood the test of ratification by the states. Counting that very first item in Madison's package, there are six in all. Call them orphans, oddities or zombies, but considering how much time has passed, it is perhaps most amazing that there have been so few.

The best known of these in our time is the Equal Rights Amendment, which provided that "Equality of rights under the law shall not be denied or abridged by the United States or by any state on account of sex."

It was the culmination of the women's rights movement of the 1960s and 1970s. Its bipartisan support carried it to two-thirds majorities in the House and Senate in the 1970s. It went out to the states in 1972 of states with a full head of steam. But the number of ratifying states stalled out at 35 — three short of the 38 required.

Eventually, the seven-year time frame Congress had set for ratification was extended by three years. But, by this point, a strong opposition movement had arisen, blocking ratification in the remaining states and persuading some state legislatures to reconsider and rescind their ratification.

One key element in this opposition was the Eagle Forum, led by Phyllis Schlafly, a prominent social conservative from Alton, Ill. She argued that the ERA could force unwanted changes on women who preferred their traditional roles. For example, Schlafly and others argued the ERA could subject women to a military draft.

Despite having a full decade to win ratification, the ERA fell short and expired in 1982.

A similar fate befell the Voting Rights Amendment for the District of Columbia. Passed by Congress in 1978, it would have given citizens of the nation's capital city the same full representation in Congress as any state (one voting representative in the House and two senators).

This amendment, too, survived a battle in Congress, where some conservatives argued the Constitution had been wise to restrict D.C., so that it did not become an overly powerful center of national politics on the model of London or Paris. The states proved less than enthusiastic, and the seven-year expiration date Congress had added as part of the deal (as with the ERA) meant the amendment died in 1985.

(It should be noted that another amendment, the 23rd, at least gave D.C. a chance to participate in the Electoral College with three electoral votes — just as it would have if it were a state. That amendment was ratified in 1961.)

For either of these amendments to go back to the states for another round of ratification votes, it would have to first be passed by two-thirds votes in the Congress. It is far from certain that either could surmount that hurdle in the current House and Senate.

Three other zombies that linger

There are three other amendments that remain in zombie space, as it were, as they have never been ratified by three-fourths of the states, but have never expired:

1. The oldest is the Titles of Nobility Amendment, first sent to the states in 1810 on the verge of the second war with Great Britain (to be known as the War of 1812). It provided that any American citizen who accepted or received any title of nobility from a foreign power (or accepted any gift from such a power without the consent of Congress) would forfeit his or her American citizenship.

This amendment came close to ratification, with a dozen states giving thumbs-up within two years. But there were 17 states as of 1803, so the Anti-Title Amendment fell short. No states have since joined in, but in the absence of an expiration clause, this amendment remains technically available.

The next of the zombies had a far shorter interval of viability but conjures a moment of maximum tension in U.S. history.

2. It was known as the Corwin Amendment after the Ohio congressman who proposed it, but it has been remembered as the Slavery Amendment.

Passed by Congress in 1861, on the eve of the Civil War, the Slavery Amendment sought to halt the secession movement by guaranteeing the federal government would not abolish slavery or otherwise interfere with the "domestic institutions of any state, including that of persons held to labor or service by the laws of said State."

It came too late to appease the seceding states, which would eventually number 11. But it was ratified by two of the slave-holding states that did not leave the Union. Needless to say, interest in this measure was superseded by the 1865 passage and ratification of the 13th Amendment, abolishing slavery and involuntary servitude. But technically, the Slavery Amendment has never expired and remains outstanding.

3. The latest of this group of still-pending amendments is the Child Labor Amendment, granting the Congress power to regulate the labor of children under the age of 18. It was ratified by 28 states, far short of the 36 required at the time. The last state to ratify did so in 1937, nearly a decade after Congress had passed this amendment, but none has signed on since, largely because other laws enacted since (principally the Fair Labor Standards Act) have accomplished much of the amendment's intent.