Accessibility links
GOP Candidate Struggling In Trump Country, So He'll Get A Presidential Boost President Trump is holding a rally to support Rick Saccone, a Republican in danger of losing a special election on Tuesday in a western Pennsylvania district that Trump won by nearly 20 points. 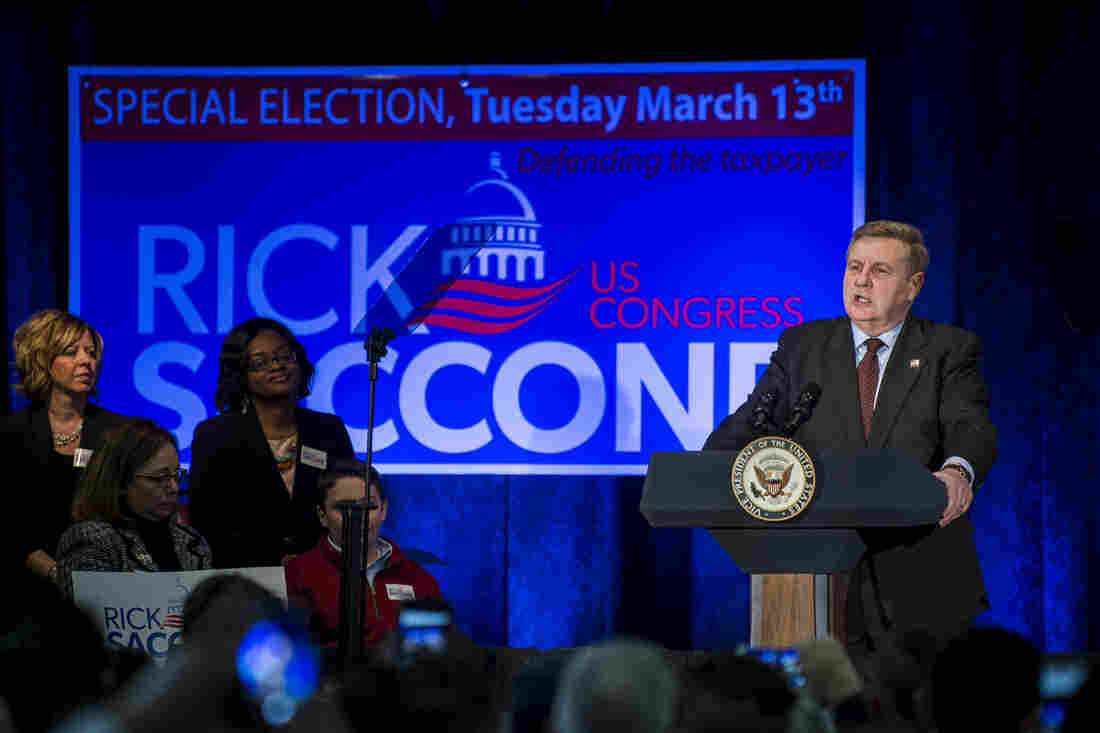 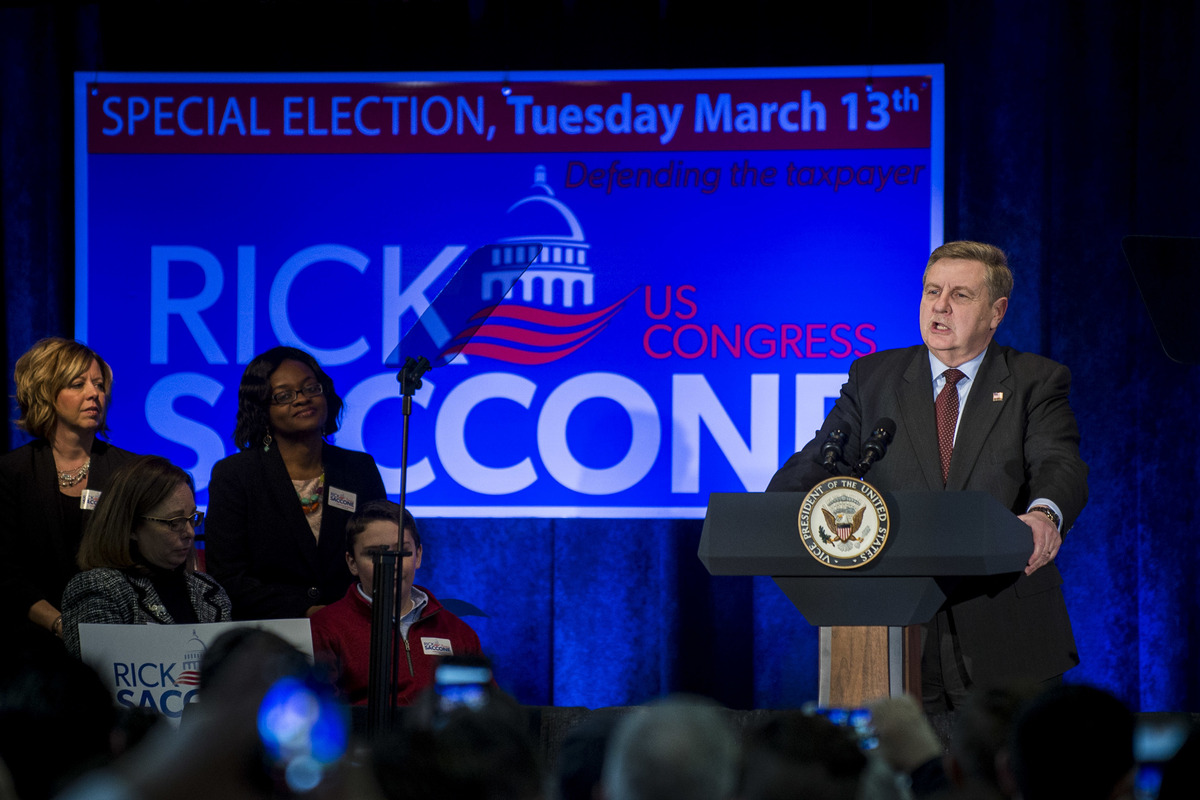 President Trump is holding a campaign rally outside of Pittsburgh on Saturday night to boost Republican congressional candidate Rick Saccone, who has been struggling to lock up a special election in a district Trump won by nearly 20 points in the 2016 election.

Republicans have poured millions of dollars into Pennsylvania's 18th Congressional District, a House district on the western edge of the state that borders West Virginia, in an attempt to ensure this bit of Trump country doesn't slip away in a special election Tuesday. Their investment comes despite the fact that the district as currently drawn will cease to exist by this November because of a gerrymandering case that requires the state's districts be redrawn.

In addition to Trump, who previously visited the region in January and gave Saccone a shoutout, the White House has also sent Vice President Mike Pence, first daughter Ivanka Trump and top Trump aide Kellyanne Conway to help him. It's all a sign of how concerned Republicans are about a potential loss that could give Republicans a demoralizing loss in a midterm election season already full of Democratic enthusiasm.

Saccone, a Pennsylvania state representative, will face former federal prosecutor Conor Lamb, the Democratic nominee, in a special election March 13 to replace former Rep. Tim Murphy, a Republican, who resigned in October because of a sex scandal.

Hours before Saturday's rally, the president said on Twitter that Saccone is "a really good person." Trump added: "Rick will help me a lot. Also, tough on crime & border. Loves 2nd A & VETS."

Heading to Moon Township, Pennsylvania, to be with a really good person, State Representative Rick Saccone, who is running for Congress. Big & happy crowd (why not, some of the best economic numbers ever). Rick will help me a lot. Also, tough on crime & border. Loves 2nd A & VETS

Although Trump won the district by huge margins, and Murphy convincingly won re-election multiple times, most recent polls suggest the Lamb-Saccone race is nearly tied. The Cook Political Report rates the contest as a "toss up." And analysts say even a closer-than-expected loss for Lamb in a district so heavily tilted toward Trump could symbolically translate into a win for Democrats — evidence that with the right candidate and the right message they can make inroads into Trump country.

"A win or a narrow loss here, either way, should really strike fear in the hearts of pretty much every Republican," said a Democratic party operative familiar with the race, "because there are a hundred districts that are structurally more advantageous than this one."

But Republicans reject the idea that this race is somehow indicative of broader political trends. Instead, they insist this race is unique because of the specific candidates running.

"Democrats fielded a candidate who's willing to run as a watered-down version of a typical Republican," said one GOP operative familiar with the race, pointing to Lamb's support for gun rights.

But, it's also about Lamb's style and charisma, Republicans say.

Lamb, a 33-year-old telegenic veteran of the Marine Corps is a stark contrast to the 60-year-old Saccone with a graying mustache.

"Lamb is a candidate who has a background, really, out of central casting — military service, prosecutor, young, energetic," said Mike DeVanney, a GOP consultant based in Pittsburgh.

Republicans say Democrats are benefiting from an "A+ candidate," whereas they have a lackluster option, who's struggled to raise money.

"Candidate quality and quality campaigns matter," said Courtney Alexander, a spokeswoman with the Congressional Leadership Fund, a GOP superPAC close to House Speaker Paul Ryan, R-Wis., that has invested $3.5 million into the race. The PAC has two field offices in western Pennsylvania and 50 people on the ground, knocking on doors on behalf of Saccone, an enormous investment for a single House race.

Short on campaign cash, Saccone has relied almost entirely on outside groups like CLF and the national party desperate to keep the House seat red.

In contrast, Lamb has raised over $3 million directly and has largely operated without the support of the Democratic Congressional Campaign Committee, which some operatives admit could have been a liability for him. 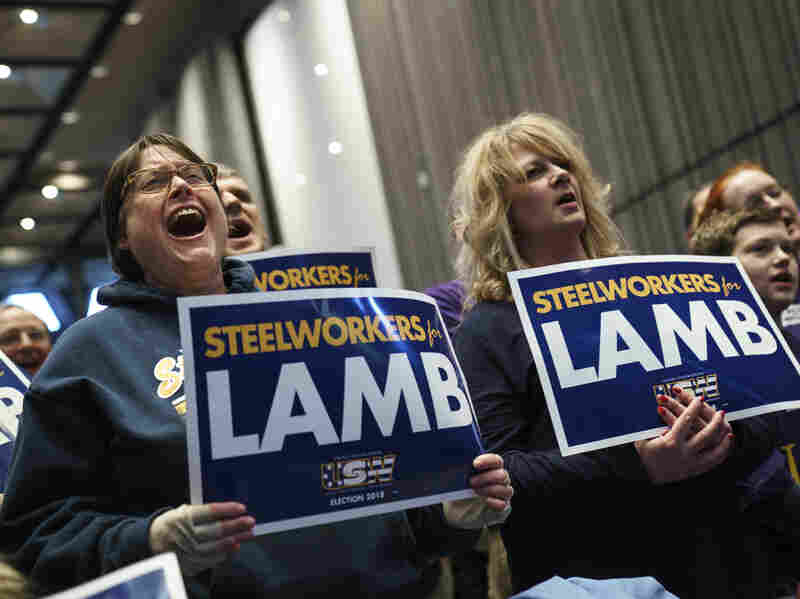 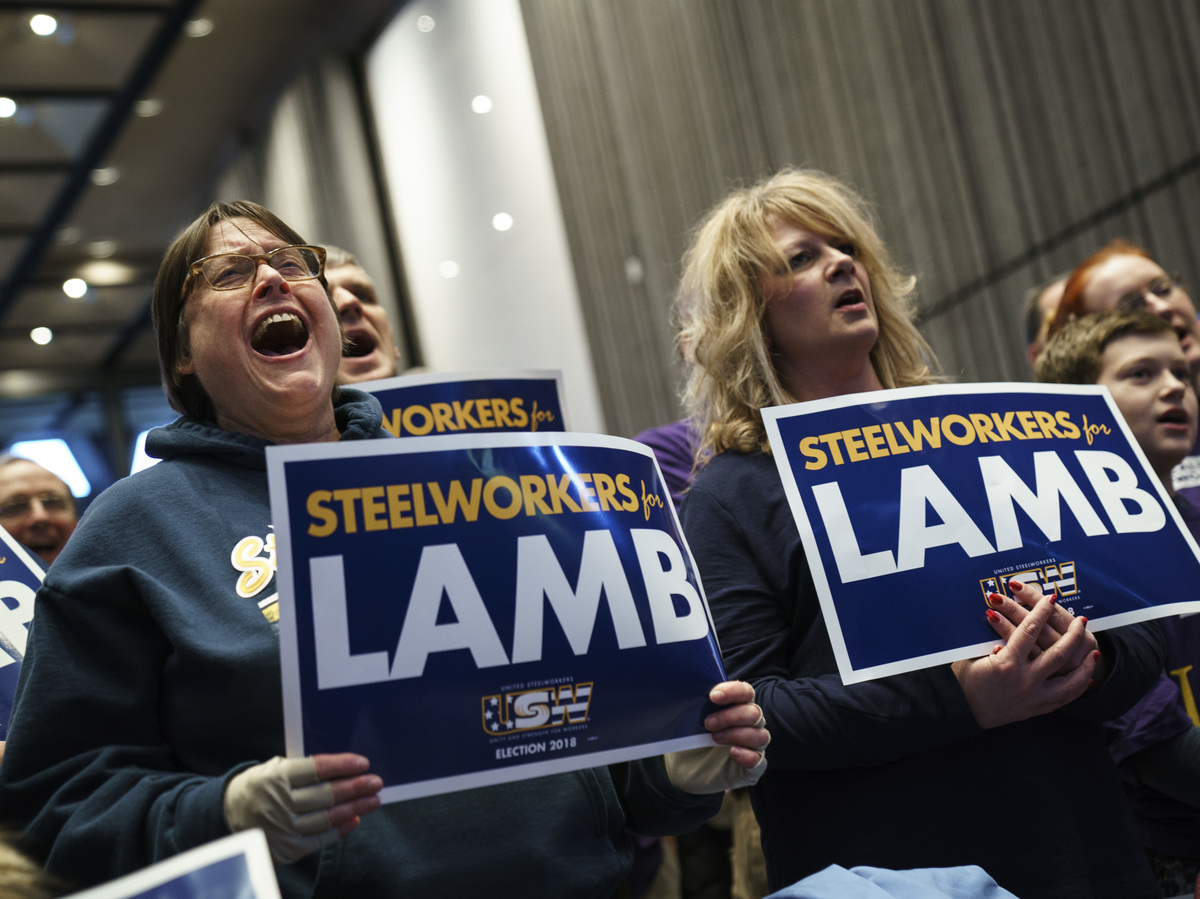 Supporters cheer for Conor Lamb, Democratic congressional candidate for Pennsylvania's 18th District, at a rally at the United Steelworkers Building, March 9, 2018, in Pittsburgh.

"One thing Conor Lamb has done is appeal to moderate voters while maintaining enthusiasm among the Democratic base," said Mike Mukis, a Democratic consultant from the 18th District.

Lamb is running as a Democrat who is keen to separate himself from Democrats in Washington.

In fact, in a recent TV ad, he explicitly sent that message about his differences with the top Democrat in the House.

"I've already said on the front page of the newspaper that I don't support Nancy Pelosi," Lamb says in the ad. "The real issues are the ones that affect your lives."

The other major factor in this race is the role of labor unions. There are over 80,000 union members in the district, according to the Pennsylvania AFL-CIO.

Former Rep. Murphy had courted and supported union voters during his time in office. In the last election, the local AFL-CIO endorsed him for re-election.

This time around, the organization is supporting Lamb, and not just because it sees him as a union supporter, but because Saccone is seen as an anti-union politician.

The local AFL-CIO is calling members and going door-to-door to ensure they vote for Lamb on Tuesday.

"I think the one thing that has put this race in play is that it is a heavily unionized district," said Mukis. "And if Lamb is able to win this race, it's partly gonna be because labor unions organized and turned their members out who voted overwhelmingly for him."

"He reminds me of my son Beau" 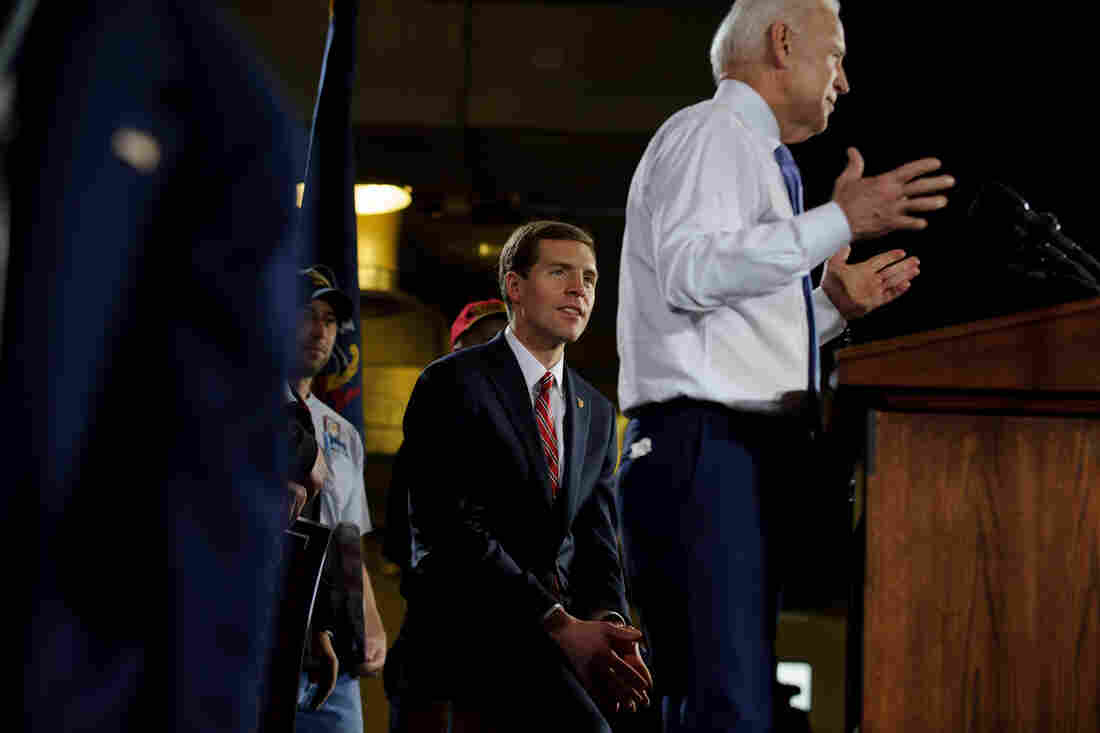 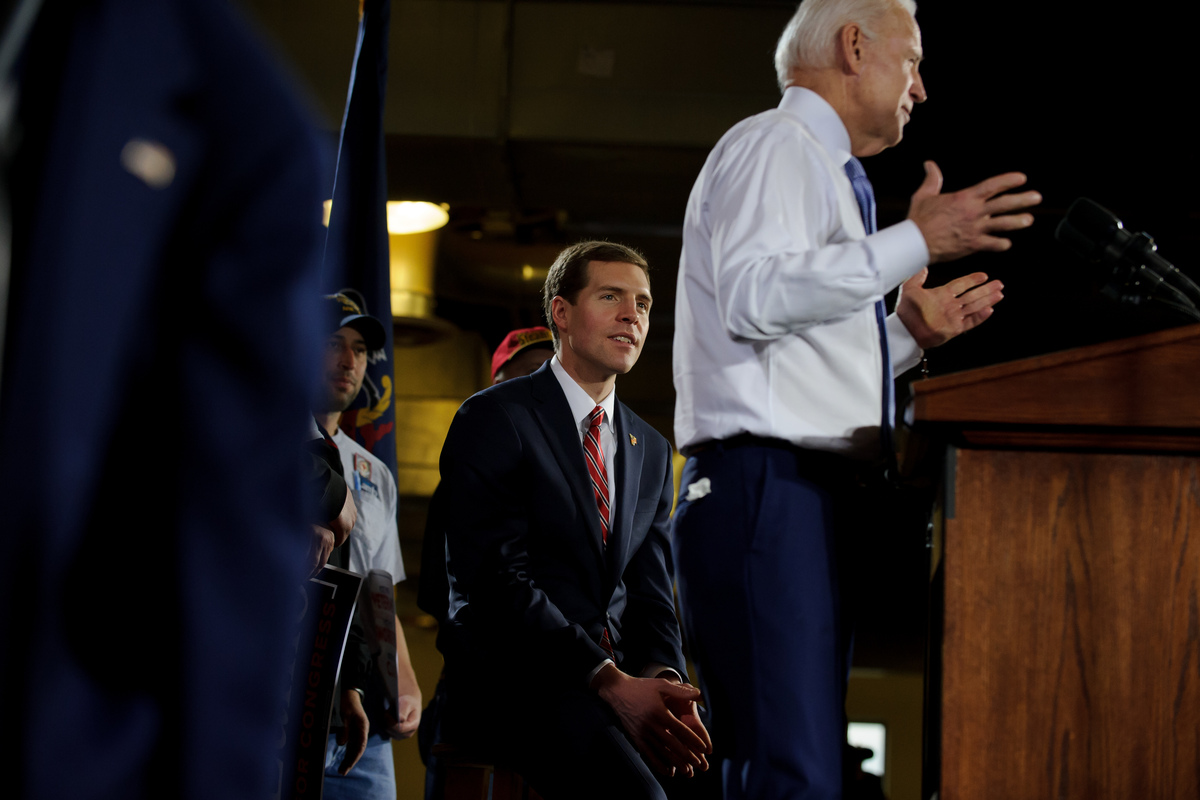 Although Lamb has tried to localize his campaign message and set himself apart from national Democrats, there's one high-profile politician whose support he's specifically enlisted — native Pennsylvanian Joe Biden, who came to the district this week to stump for him.

And while campaigning for him, the former vice president paid Lamb the ultimate compliment: "He reminds me of my son Beau," Biden said, referring to his eldest son who died of brain cancer in 2015.

Lamb is walking a tightrope in a district where the president remains popular. He's trying to appeal to moderates, and he's publicly backed the idea of steel and aluminum tariffs, which the president formally ordered on Thursday. In some ways, Lamb is trying to run independent of the president, rather than as a referendum on him, and it seems to be resonating.

"When you look at just money raised, volunteer efforts that have been put forth, the Democrats are running the most energized campaign that I've ever seen in this seat in near history," said DeVanney, who worked as a consultant for former Rep. Murphy.

As for Saccone, GOP operatives say his strategy is to appeal directly to Trump's base.

"The president and his policies are popular in PA-18," said Alexander. "And I would think it's certainly helpful that he's coming up this weekend."

And if this race is as close as people are predicting, a little boost from the president could make the difference, and, Republicans hope, prevent a political embarrassment heading into the midterms.