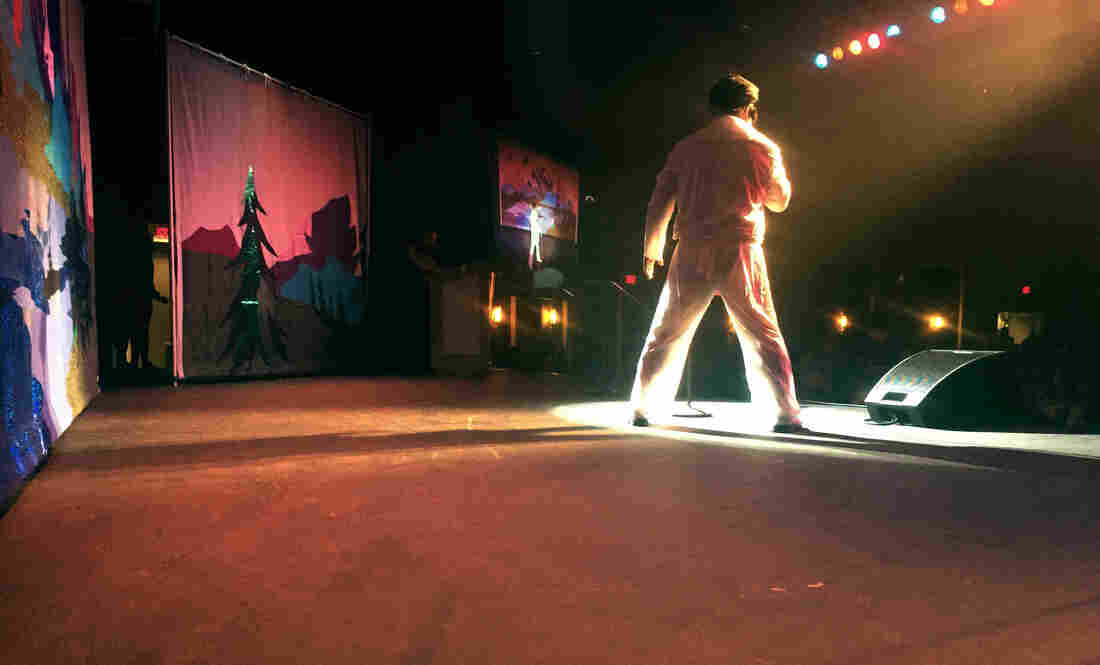 JR Bluff donned a wig and a white leisure suit and performed "Hound Dog" by Elvis Presley. He translated the song into his native Salish language for the contest. Emily Schwing/Northwest News Network hide caption 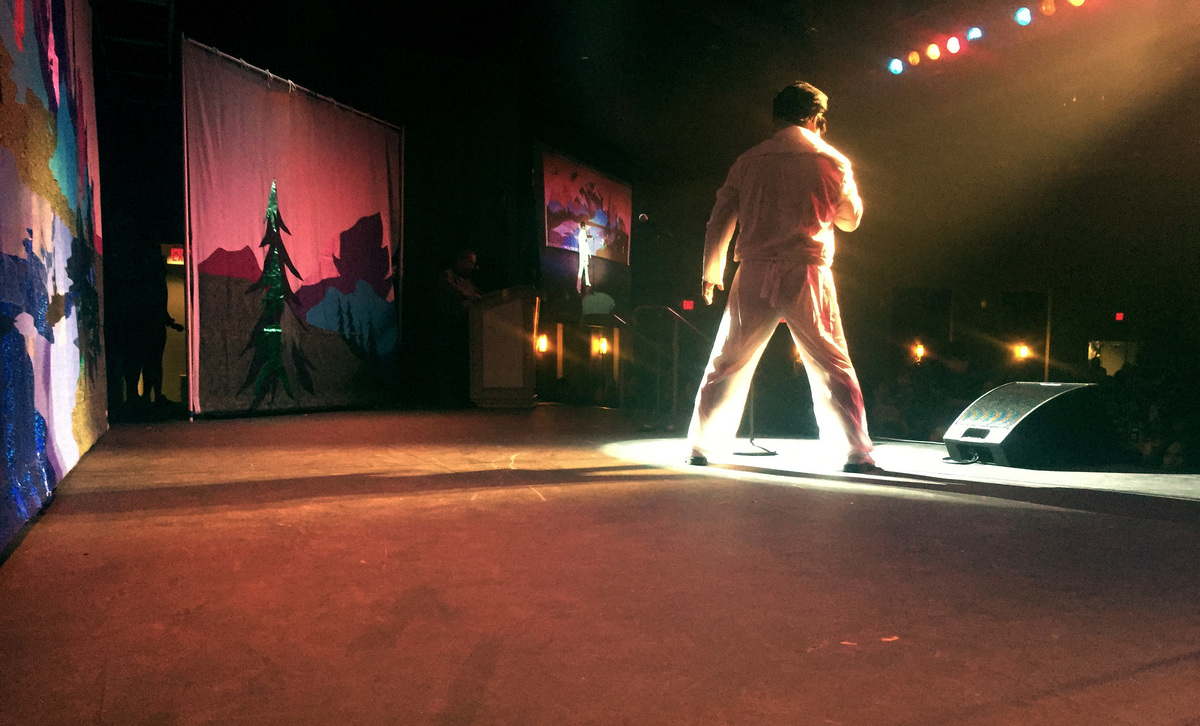 JR Bluff donned a wig and a white leisure suit and performed "Hound Dog" by Elvis Presley. He translated the song into his native Salish language for the contest.

If you were a teenage girl in 1997 you'd probably recognize the song "Everybody" by the Backstreet Boys. But if you heard it in the Salish language, would you still be able to sing along?

Keegan Heron can. He translated the song into Salish and performed it this week for the annual Salish Karaoke contest in Spokane, Wash. He's only been studying the indigenous language for about nine months.

"There's a lot of words that I didn't know two weeks ago," he says.

Heron teaches preschool on the Flathead Indian Reservation in Montana.

"I work with 4 and 5-year-olds," he says. "I'm trying to teach them Salish, and so I need to learn first before I can teach them."

By the end of his karaoke routine Heron was confidently dancing his way across the front of the stage, waving his arms and shouting, "everybody dance!" in Salish to an audience of at least 500 people. (He won second place.)

Two-hundred and fifty years ago, thousands of indigenous people spoke a dialect of Salish. Today, in the part of the Northwest from about Spokane to Missoula, around 300 to 400 people speak it fluently.

Natalia Garza wants to become one of them. She took third place for her Salish performance of "Dreams," by Fleetwood Mac. Garza moved to Washington state from Mexico and decided to learn Salish three years ago.

"It's not something that you learn in books," Garza says. "It does not stay in a classroom."

In the 1870s, Native American children were forced into boarding schools, where they could only speak English. Elders fluent in Salish passed away and there were fewer and fewer people speaking it.

To a newbie, Salish seems complicated. It has many new letters; one looks like an upside down "w," and there are lots of apostrophes. Speakers have to close parts of their throats and move their mouth and lips to make certain sounds. To win the karaoke contest — like the ensemble who performed "My Girl" — you have to show off those skills.

Grahm Wiley-Camacho has been speaking a dialect of Salish since childhood — he learned at home from his mother — and now he teaches Salish full time in Spokane. He's judged the karaoke contest in the past and says it has a specific scoring rubric.

"There's audience response and the showmanship piece of it, and then there's your singing ability," he says. "Then the fourth category is how much language did you use; how complex was your language?"

As a full-time teacher, Wiley-Camacho uses singing in his classroom to give students more confidence and a wider vocabulary. Eventually some of those students might find their way to the stage on karaoke night.

For almost a decade, contest organizer JR Bluff has been up there. This year he dressed as Elvis, and he swung his hips just like the music legend, to the sound of "Hound Dog."

Bluff is a member of the Kalispel tribe and runs its language program. For him, celebrating good times — and the Salish language — are at the heart of the karaoke contest.

"It's fun to be crazy, but to me it's celebrating," he smiled. "We're celebrating, we're speaking it. It's fun."

In a previous version of this story, Keegan Heron's last name was misspelled as Aaron.