Accessibility links
Trump In Pennsylvania: I Need Rick Saccone To Help 'Keep America Great!' Trump came to campaign for Republican Rick Saccone in a Pennsylvania congressional race. But his message was as much about himself and seeking re-election in 2020 as it was about the 2018 midterms. 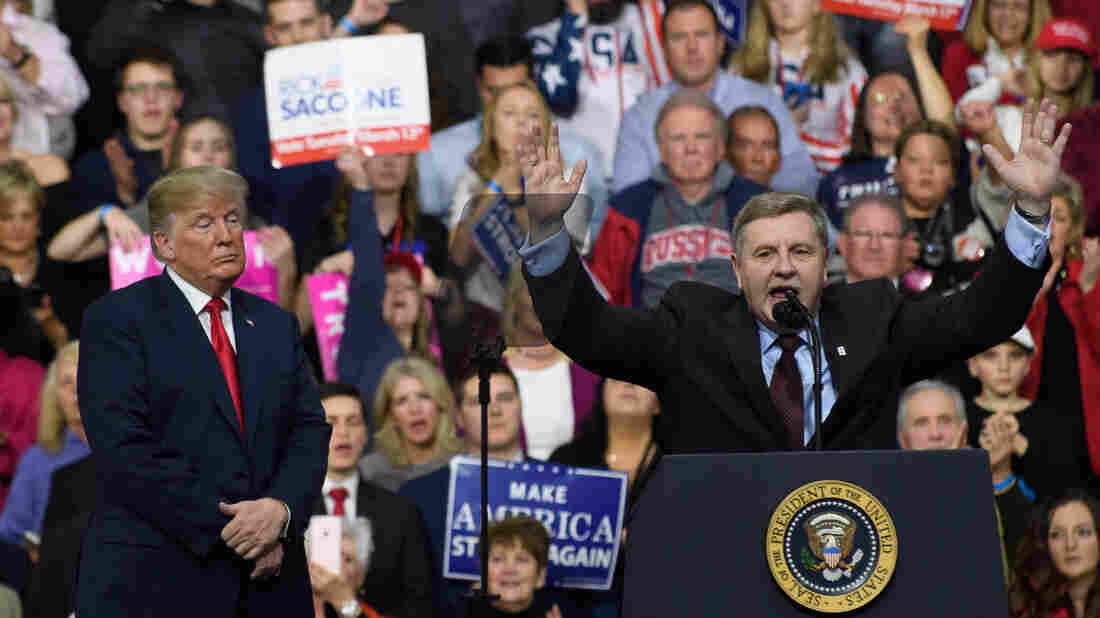 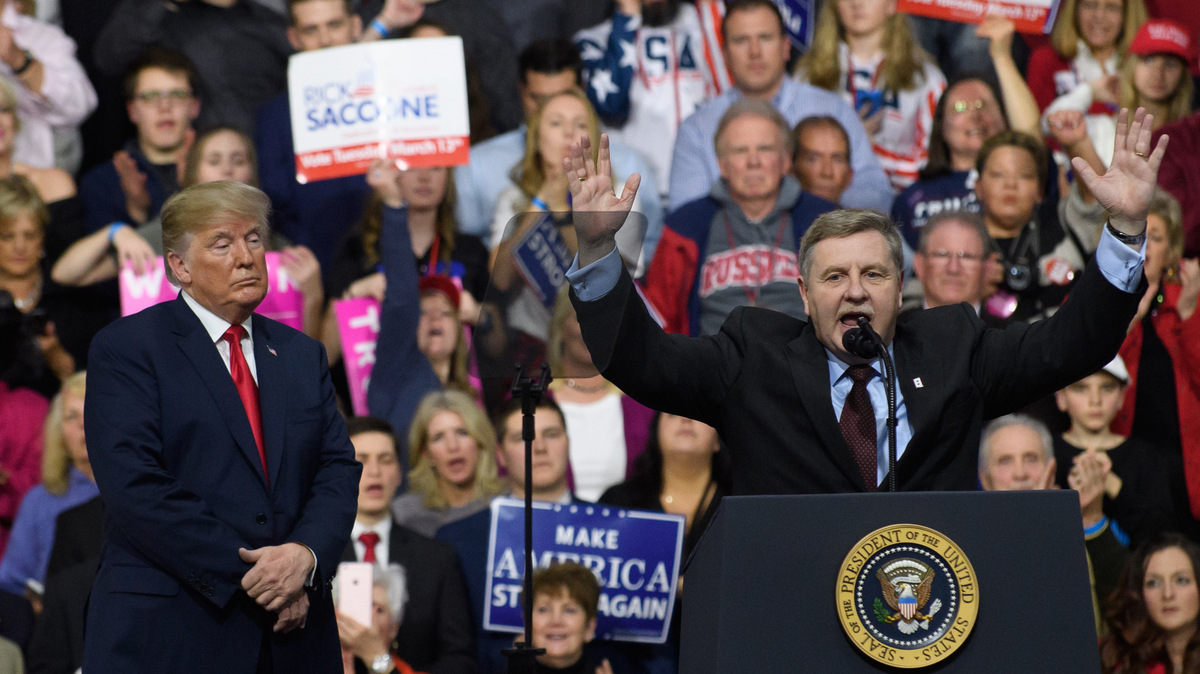 President Trump gave an early look Saturday at how he intends to help Republicans maintain control of Congress in 2018. Trump delivered his midterms message during a campaign rally near Pittsburgh, Penn. — a rally that he held to help a Republican struggling to hold onto a House district Trump won by double digits in 2016.

Republican Rick Saccone, a state lawmaker, is in a tight race against Democrat Conor Lamb in a closely-watched special election in western Pennsylvania. Should Lamb win, it would be another indication of a difficult road ahead for the GOP in this year's midterms.

The president made the argument that his supporters — in what both he and political observers are calling "Trump Country" — should vote for Republicans this year in order to prevent the top Democrat in the House, Minority Leader Nancy Pelosi, D-Calif., from regaining the speaker's gavel and possibly seeking to impeach him.

And to drive home the point about impeachment should Democrats take control of the House, Trump also targeted Rep. Maxine Waters, D-Calif., a frequent and outspoken critic who has been calling for the president's ouster from office for months.

Trump continued: "But we can only do that if we elect people who are going to back our agenda and fight for our values. And that is why we have to defeat Nancy Pelosi and Maxine Waters, a very low-I.Q. individual."

Trump referred to Lamb as "Lamb the sham."

"He's trying to act like a Republican," the president also said of Lamb, "He won't give me one vote."

"Here's the thing: We're dealing with people that want to obstruct," Trump said of Democrats. "They want to stop us from doing things."

"Here's the problem: As soon as he gets in, he's not going to vote for us," Trump also said of Lamb. "He's going to vote the party line."

In a TV ad, Lamb has made a point of highlighting the fact that he doesn't support Pelosi, part of his strategy to separate himself from most national Democrats. And Lamb has also publicly backed the idea of tariffs on steel and aluminum, a policy change Trump formalized Thursday.

The president's 2018 message came about 30 minutes into a nearly 75-minute stump speech that ranged through multiple topics but touched on several themes familiar since Trump launched his upstart presidential bid in 2015.

"Do me a favor. Get out on Tuesday and vote for Rick Saccone. And we can leave right now," Trump said near the start of his remarks.

The president went on to tout his recently enacted tariffs. "Steel is back and aluminum is back," Trump said.

On North Korea, Trump used his familiar refrain of, "Let's see what happens," just days after it was announced that he intends to meet directly with Kim Jong Un in the hopes of achieving the permanent denuclearization of the rogue regime.

"This should've been handled, by the way, over the last 30 years. Not now," Trump also said of North Korea. "But that's OK," he added, "because that's what we do. We handle things."

Trump faulted his predecessors in the Oval Office beginning with President Obama and going back to Presidents George W. Bush and Bill Clinton for failing to rid North Korea of its nuclear capabilities.

Trump talked up the economy since his election. He mentioned the latest monthly jobs report, overall job gains since Election Day in 2016, milestones in black and Hispanic unemployment achieved since he took office, stock market gains and the GOP tax cuts enacted late last year.

He rehashed his frequent criticism of so-called sanctuary cities and called on Congress to deny federal funding to localities that do not provide the level of cooperation sought by the Justice Department and agents of Immigration and Customs Enforcement.

The president mentioned crime and the gang MS-13 — just as he had in his recent State of the Union address. He also repeated his call to end what he calls "chain migration" in the U.S. immigration system and to end the diversity visa lottery program.

Citing conversations he said he'd had with China's president, Trump suggested that American drug dealers should be subject to the death penalty for their role in the current opioid epidemic and crime more generally. This proposal echoed recent remarks he made during a White House opioid summit.

The president mentioned his threat to start an all-out trade war with the European Union over his steel and aluminum tariffs, saying again that he intended to tax European cars if the EU sought to retaliate for his new tariffs. "We're gonna tax Mercedes Benz. We're gonna tax BMW," Trump told the crowd.

Trump talked about trade with Mexico and Canada and the ongoing NAFTA negotiations. And on the topic of international trade, Trump faulted his predecessors all the way back to President Ronald Reagan, who held office for most of the 1980s, for what he sees as the current unfairness in the country's trade relations with much of the rest of the world.

In one of the rally's more surreal moments, the president actually provided the crowd with an extended, nearly two-minute impression of being presidential that mocked the more straight-laced style of previous presidents and suggested that Trump's looser style is more entertaining. 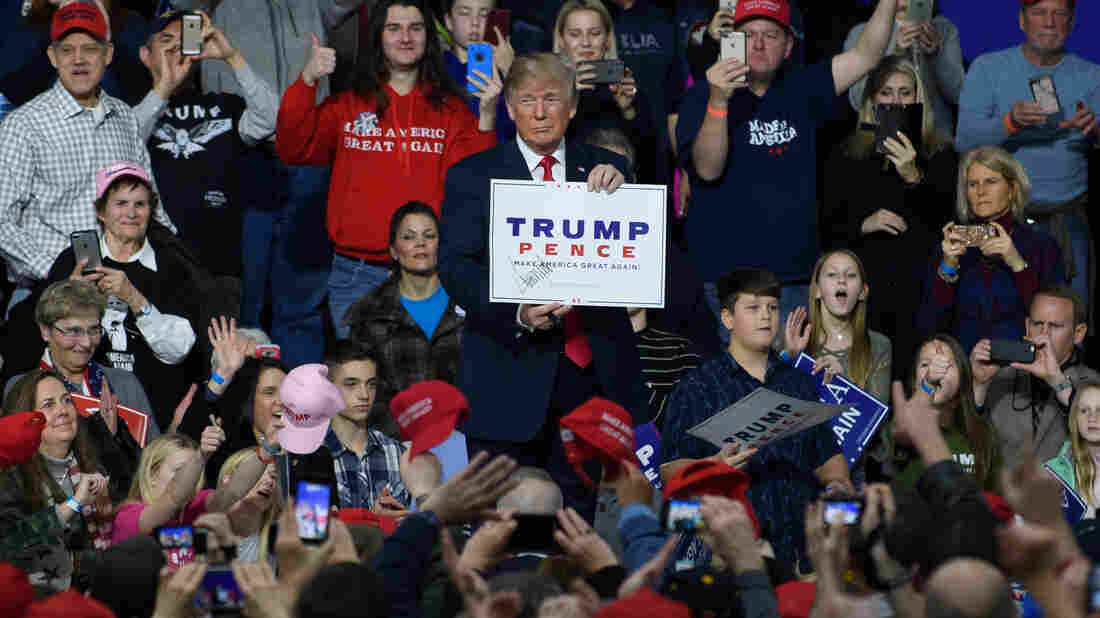 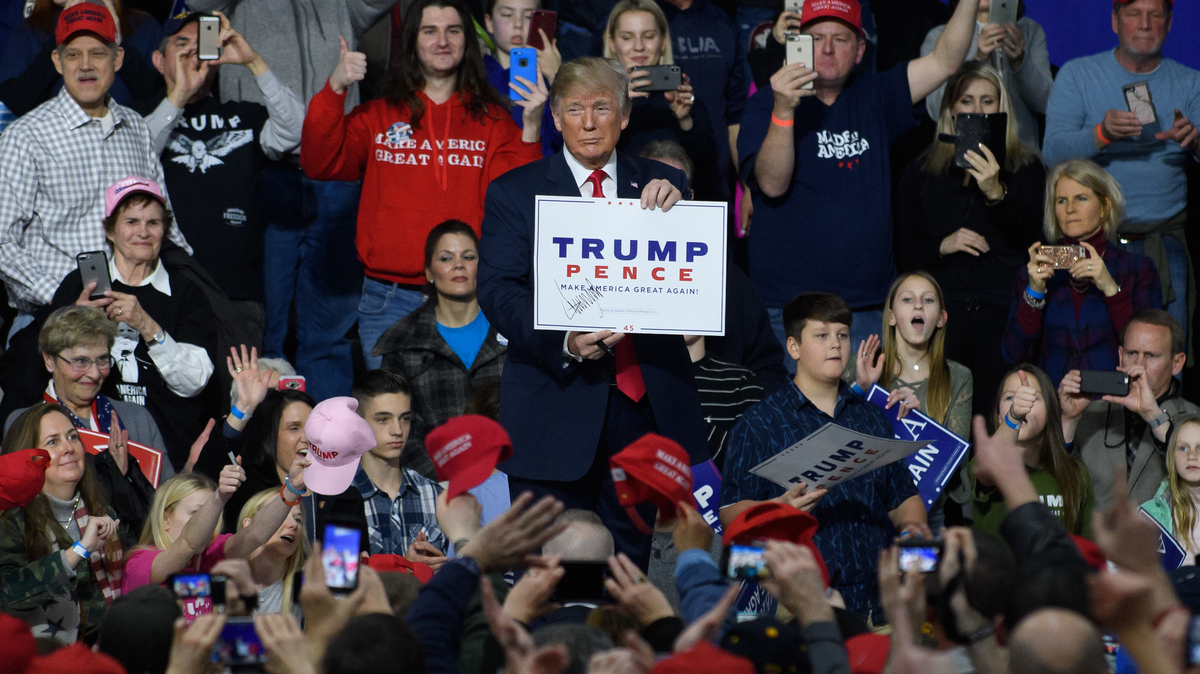 President Trump leaves after speaking to supporters at Saturday in Moon Township, Penn.

Trump also made his trademark attacks on the media. In a rhetorical sleight of hand, the president told the crowd at the beginning of the rally that Washington, D.C., had "a lot of evil, a lot of bad people, a lot of fake media." Trump once again singled out CNN, MSNBC and NBC for what he views as their biased coverage of him and their poor ratings.

He specifically mentioned media mogul Oprah Winfrey and suggested he couldn't wait for her to run for president so he could beat her. And he called Meet The Press anchor Chuck Todd "sleepy eyes" and referred to Todd as "sleeping" before piling on a vulgar insult to refer to the seasoned D.C. journalist.

Trump's speech Saturday drew a quick response from the Congressional Black Caucus, a group of African-American lawmakers that is increasingly becoming an outspoken antagonist of the president and his administration. On Twitter, the group came to the defense of one of its own, Rep. Waters, and demanded an apology from Trump for his "low-I.Q." remark.

@realDonaldTrump: We're not surprised that you're using #WomensHistoryMonth to continue your attacks on women. We demand an apology that we know you're not smart enough or strong enough to give. After all, you couldn't even bring yourself to apologize to a military widow. https://t.co/2HeX33hM0L

And David Axelrod, a onetime top aide to President Obama, had a broader critique that suggested Trump's recent policy moves had been all about politics during what is looking like a tough midterm year for Republicans. Trump's recently announced tariffs "were calculated, and certainly timed, so he could make this protectionist pitch from this platform in steel country on the eve of a politically-important House race," Axelrod wrote on Twitter.

If you had any doubts, this spectacle certainly should resolve them:@POTUS ‘s hasty, sloppy advance of tariffs were calculated,and certainly timed, so he could make this protectionist pitch from this platform in steel country on the eve of a politically-important House race.

Lamb's response to the 75-minute event was muted. "Let's win this," the Democrat said on Twitter just as the Trump-Saccone rally wrapped up.

Saccone spoke briefly as the rally ended after Trump introduced him — saying that Saccone is "a really good person" who needs to come to Washington to prevent Democrats from rolling back the GOP tax cuts, limiting Second Amendment rights and thwarting Trump's push for increased military spending. "I came tonight because this guy is special," the president also said of Saccone.

"Rick is going to vote for us all the time," Trump also said ahead of Tuesday's election, emphasizing again that a Democrat like Lamb could not be trusted to back Trump's agenda fully.

But the more important message of the night might be the one Trump delivered earlier in his remarks — a message as much about himself and seeking re-election in 2020 as about the 2018 midterms:

"The task for everyone here tonight is to make sure that this great American comeback continues. Full speed ahead."