Accessibility links
Partition, Through A Child's Eyes, In 'The Night Diary' Veera Hiranandani's new book is a coming of age story, for both her half-Muslim, half-Hindu heroine, 12-year-old Nisha, and Nisha's country — which is about to split into India and Pakistan. 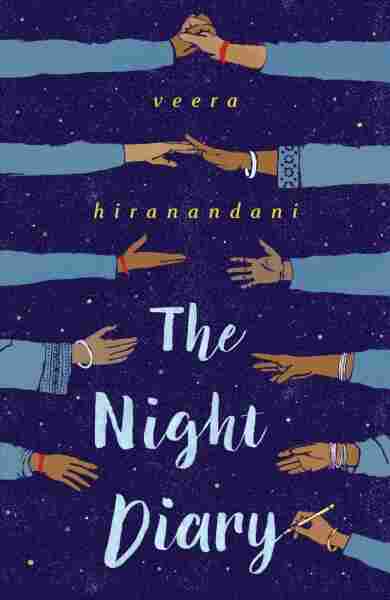 The Night Diary is novel set at a pivotal — and bloody — moment in history, and told in the voice of a 12-year-old girl. Nisha takes us on her personal journey as part of the mass exodus of millions of Hindus and Muslims across the border between India and newly established Pakistan, a turbulent time known as Partition.

We learn Nisha's story through her journal, full of the letters she writes to the mother she never knew, who died giving birth to Nisha and her twin brother. "My father went through Partition when he was nine," says author Veera Hiranandani. "He had to leave his home, with his mother, his father and his five siblings. Basically, they packed what they could, got on a train and left for the new border of India."

It certainly is rare, to have happened at that time. But it did happen, and part of the reason I wanted to do that is that I am from a mixed background. My father is Hindu, and my mother was born in this country, and she's Jewish. And having multiple identities was something I've always been navigating. But I wanted Nisha to be from a mixed background, not only for my own personal connection, but it allowed me to explore her own sense of belonging during this time, and it allowed me to open up and break through some of the bias, and explore the questions I had about that time.

On Nisha's relationship with her family's Muslim cook

Her father's a doctor, he's very busy, pretty reserved, and she doesn't have a mother. She doesn't have an incredibly intimate relationship with her grandmother either, and Kazi really functions almost as this mother and father and friend for her, because she's lonely in that way ... he knew what her mother was like, and he, bit by bit, sort of shares that with her. Also he introduces her to cooking and ignites her love of food, and that is a way for her to express herself, because she's very shy ... and that is certainly a part of me.

I hope it resonates on a few levels. I think kids that I know, in my area, they learn about what a refugee is, but I don't know if they always have a specific sense of what that means for an individual person going through this. So I hope that readers will see that Nisha is a 12-year-old girl who loves her home, has a complicated relationship with her father, loves her brother — and also they fight — and she wonders what's for dinner, and she does all of these things that I think most 12-year-olds could relate to. And another aspect that I hope readers would take away from is that Nisha really doesn't understand how brave she is, and that takes her a long time to understand how brave it is, during a time of adversity, that she hangs on to that hope. And because she comes from this mixed background, she doesn't understand why people separate themselves in the way that they do. And that certainly is resonating today more than I even expected when I started writing this novel years ago.