Accessibility links
18 Years After 9/11, Critical Incidents Still Overload Emergency Radios After the chaos of terrorist attacks, the U.S. spent billions to update first responder radio systems. But the newer gear can still be overwhelmed — as it was in the school shooting in Parkland, Fla. 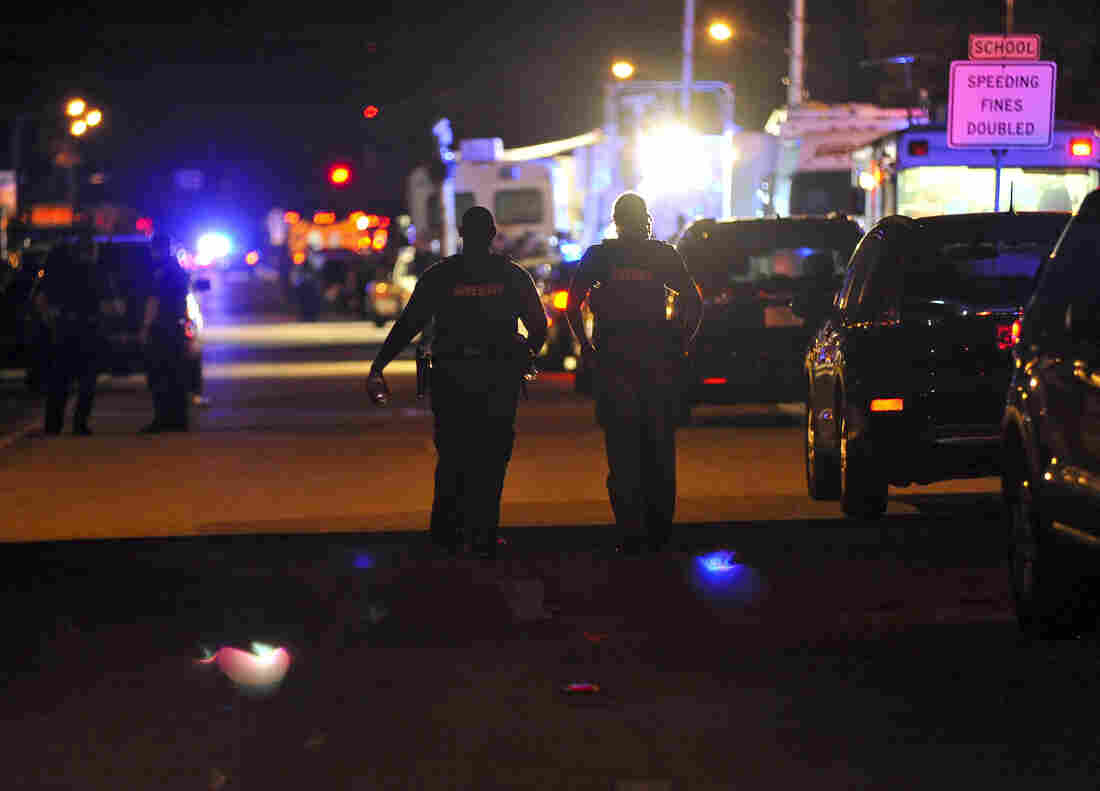 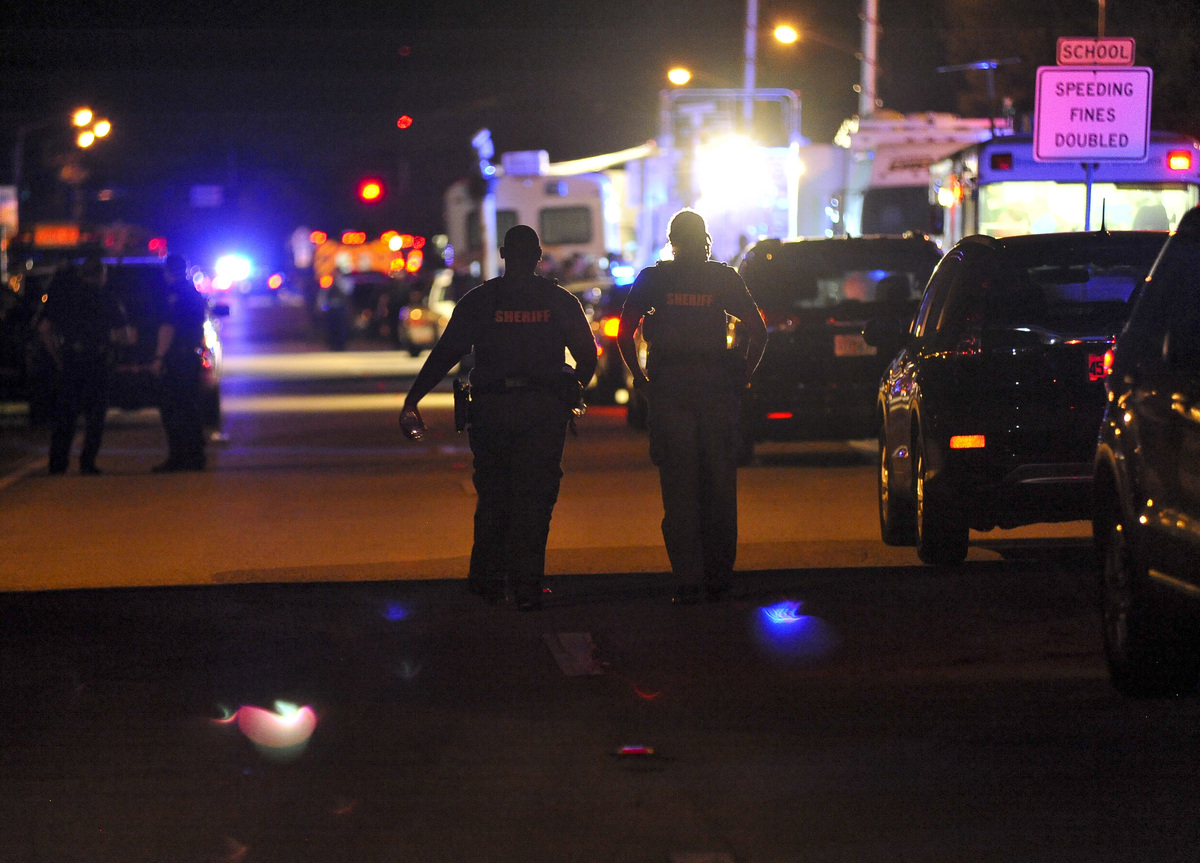 Police vehicles line up at Marjory Stoneman Douglas High School in Parkland, Fla., after the shooting that killed 17 people last month. Officers were frustrated when the Broward County radio dispatch system seemed to be jammed.

If you go back and listen to the recording of the Broward County radio dispatch system during the shooting at Stoneman Douglas High School last month, you can hear the frustration in the voices of police.

"I can't transmit for some reason," says one officer. Other first responders echo the complaint.

"Just so you know, we're having trouble transmitting," says another person, and more than once, you hear a general plea for users to limit their communications to "10-33 calls" — radio code for an emergency.

"All cities, all radios be advised to keep your traffic to a minimum. With each transmission, it's causing it to crash, it's overloaded right now, per Motorola."

Motorola Solutions supplied the radio system in Broward County. It's the country's biggest seller of public safety radios, as jurisdictions move increasingly toward digital technology. Digital radio promises greater capacity, but it is sometimes the subject of complaints from some police and first responders, who say the systems can become finicky during large-scale events.

Motorola Solutions wouldn't agree to an interview about the complaints heard on the air in Broward County after the Feb. 14 shooting, but in an emailed statement it says the radio system there "did not crash and was operating as designed during very busy radio traffic."

"The system was never crashing," says Jose de Zayas, one of the administrators of the county's emergency radios. "The system was operating the way it was designed to operate, which means it goes into this 'throttling event,' where it starts to slow down and restrict users from submitting inbound requests to the system."

In other words, the system throttles, or slows, the process through which users pressing their talk buttons get assigned to a channel.

The radio system in Broward County is "mixed mode," meaning it's a combination of analog and digital. It's in the process of being upgraded, and de Zayas says reception needs to be improved in one location, but both he and Motorola Solutions insist there were no technical failures.

Still, for officers in the middle of a crisis, this kind of throttling can be very unsettling.

"Your radio gives you a reject sound," says Sgt. Dan Hils, a police officer in Cincinnati and also head of the local chapter of the Fraternal Order of Police. He says the new digital radios there — a Motorola Solutions product considered more advanced than the one in Broward County — can get as clogged as a freeway at rush hour.

"At routine times, it works fine, but you get busy and you have some sort of emergency, some sort of small riot situation ... you have all these people entering that highway all at once, and when all the lanes are full, you get blocked!"

He says a noise-reduction feature on the new radios sometimes filters out officers' voices, particularly in a crisis when voices get more agitated and high-pitched. Hils says this feature could mute an officer's voice precisely when things are most chaotic or dangerous.

Officers' frustration with the radios got so bad, they started a social media campaign to pressure Motorola Solutions to come back to Cincinnati and make fixes. The company did, and Hils says the radios are more reliable now. But he still doesn't completely trust the new generation of radios in critical incidents, when many people are trying to communicate at the same time.

"In the old analog systems, we were able to talk over each other and you could hear something," Hils says.

Elsewhere in the country, police have expressed skepticism about radio systems that have become "too Jetsons," as one officer in Las Vegas put it. His department abandoned a new $42 million radio system made by the Harris Corp. in 2012. Officers complained of difficulty making voice calls, especially when a lot of users were trying to talk.

There's even a webpage, run by an engineer and owner of an emergency radio systems company in California, that collects news media accounts of technical problems with newer digital systems.

But the manufacturers and other defenders of digital radio say the real problem tends to be user error, not the technology itself. In Broward County, de Zayas says police and other first responders need "good end-user education."

Cops who keep pushing the talk button when the system is bogging down just make things worse; it's similar to clicking over and over again on a slow Internet link. They also tend to forget that their digital radios usually have a "priority" button, which is supposed to let people with urgent conversations jump to the head of the line.

Bill Schrier, who used to run the radio system in Seattle, is now a senior adviser to a federal effort to build "FirstNet," a cellular network for first responders. Despite the glitches, he says radio systems have improved since Sept. 11.

He says digital signals have their limitations — they don't carry as far, and have trouble penetrating buildings. And even with the added channel capacity, it is possible for them to bog down in a big enough incident.

"You'll have a lot of different people push the talk button on the side of the radio, and if you outstrip the number of frequencies in your system, you're going to get people unable to talk," Schrier says.

But, he says, that doesn't mean we should go back to analog radios: The solution to the shortcomings of digital radio is even more kinds of digital communication — such as the FirstNet cellular system, he says.

"We need to supplement our voice-only radio systems with networks that allow data to be transmitted. Building plans, for example, or the use of apps on smartphones, that will reduce the voice traffic."

In other words, in a crisis, police and first responders should do what the rest of us have been doing with our cellphones: talking less, and uploading more.