Accessibility links
GOP Pours Cash Into Pennsylvania Special Election To Prevent An Upset Defeat Republicans have spent more than twice as much on the Pennsylvania race as Democrats. That flood of spending comes even though the district won't exist after this November's election. 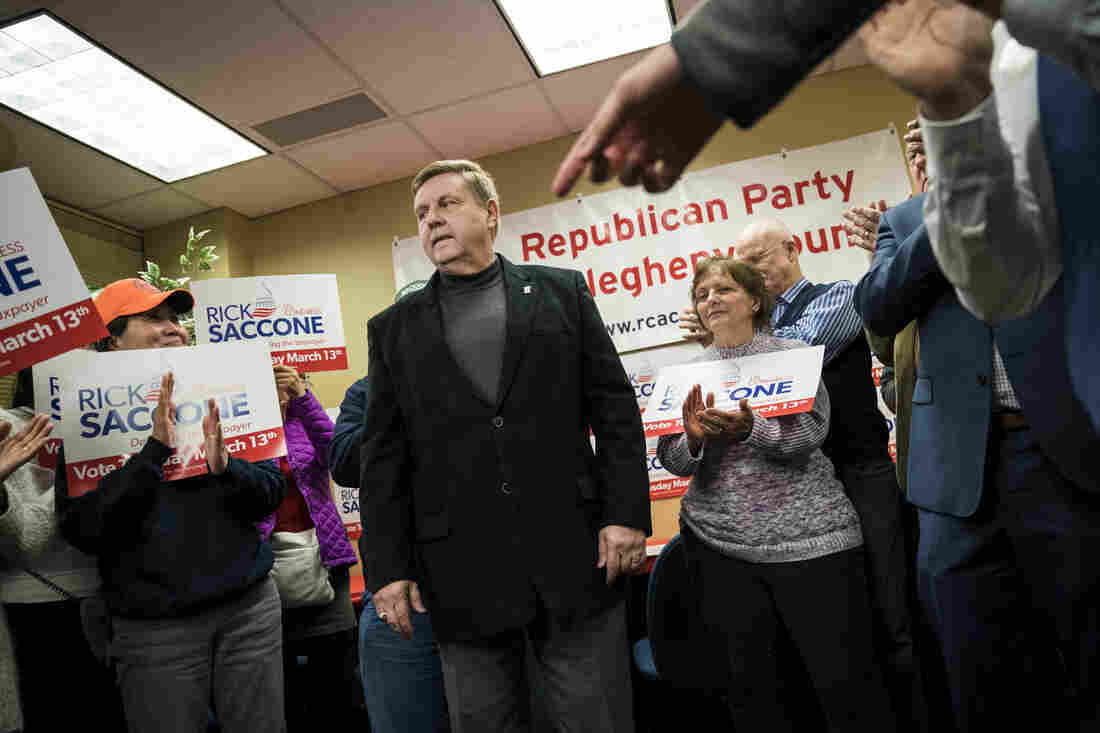 At least for one more day, the hills of southwestern Pennsylvania are alive with the sound of campaign cash.

Voters in the state's 18th Congressional District on Tuesday elect a new member of Congress. It's a surprisingly close race in this reliably Republican district between Democratic former prosecutor Conor Lamb and Republican state legislator Rick Saccone. GOP and conservative groups are shoveling in dollars to overcome Saccone's lackluster fundraising — this despite his claim that he "was Trump before Trump was Trump."

The Center for Responsive Politics reported Friday the two sides had spent a total of $15.6 million — slightly more than the most costly House races in 2016, although far less than the maelstrom of a special election in Georgia last year, which cost $69.2 million.

Republicans have poured more than twice as much as Democrats into the Pennsylvania race. That flood of spending comes even though the district won't exist after this November's election, following the state Supreme Court's decision to redraw Pennsylvania's 18 congressional districts. Neither Lamb nor Saccone will reside in the redrawn district.

Registered Democrats outnumber Republicans in the 18th, but it votes Republican. Trump carried the 18th in 2016 with 58 percent of the vote.

Republican Rep. Tim Murphy represented the district from 2003 until this year. He resigned because of an extramarital affair in which he suggested his partner get an abortion. Tuesday's election is to choose his successor.

Republicans fear that a loss will chill their hopes of holding control of the House this fall. There's anxiety that if Lamb wins, more Republican incumbents will join the record-setting 37 of their colleagues already headed for the Capitol Hill exit ramp.

Among the luminaries who have stumped for Lamb is former Vice President Joe Biden, who visited the district last week.

Saccone's small-town style of campaigning has put him nearly on the sidelines of the campaign. As of last week, he had spent $613,000 to Lamb's $3 million.

"Rick Saccone has had difficulty raising money, to be candid," a Republican political operative familiar with the race told NPR. He said Saccone "doesn't have a natural fundraising base [and] has never really had to do it" in his campaigns for the state Legislature.

"Normally this would be a bad strategy [for Republicans], but it's clearly the way to stay competitive," said political scientist Michael Franz, with the Wesleyan Media Project, which tracks campaign advertising and spending. He said that ordinarily, "it could lead to repeat messages or competitive messages," which would hurt, not help, the candidate.

In the 2016 elections, Murphy ran unopposed and spent $1.5 million. No outside groups got involved.

A previous version of this story said that Interior Secretary Ryan Zinke's appearance in southwest Pennsylvania was a campaign appearance. Zinke's office clarified it was an official appearance to announce a grant program for reclaiming abandoned coal mines. Pennsylvania is expected to get 19 percent of total national funds. Rick Saccone was among the local politicians attending the event. Two House Democrats subsequently alleged that Zinke used federal dollars to promote Saccone's candidacy; they called for an investigation by the Office of Special Counsel, which handles ethics cases.