Accessibility links
Rex Tillerson Out As Secretary Of State; Trump Nominating CIA Chief Mike Pompeo Trump tweeted that CIA Director Mike Pompeo will take over for Rex Tillerson, who has had a strained relationship with the president. Undersecretary of State Steve Goldstein was also fired. 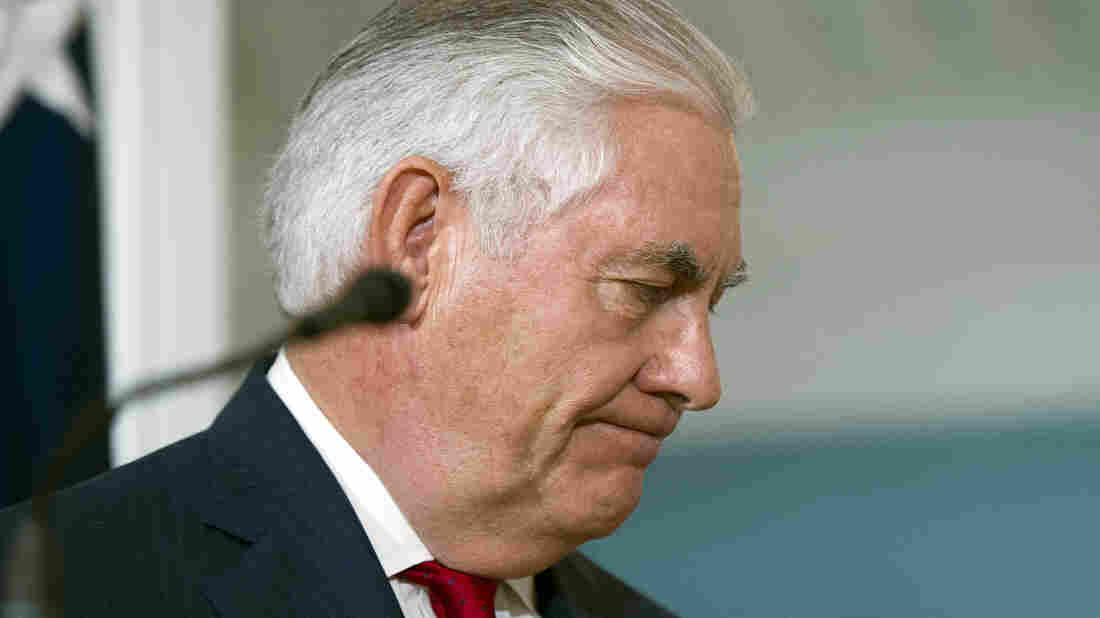 In October, Secretary of State Rex Tillerson did not deny reports that he called President Trump a "moron." It was one of several signs of tension between the men. Cliff Owen/AP hide caption 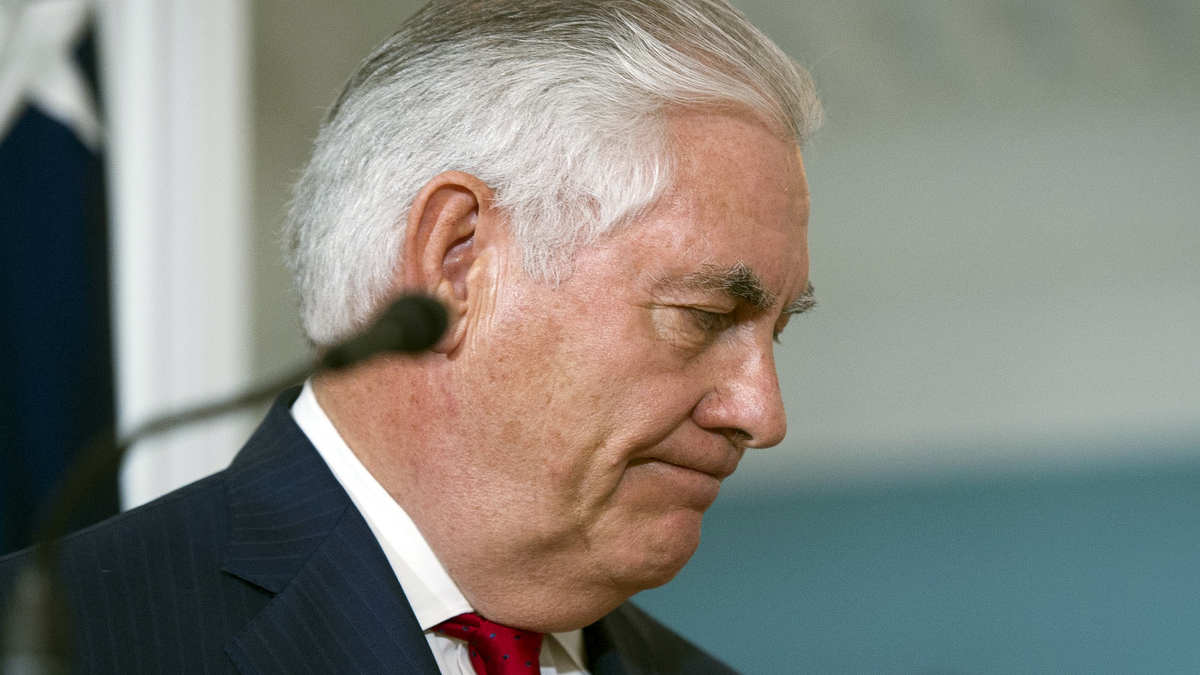 In October, Secretary of State Rex Tillerson did not deny reports that he called President Trump a "moron." It was one of several signs of tension between the men.

President Trump announced Secretary of State Rex Tillerson was fired on Tuesday morning in a tweet that followed a year of frequent tension between the two leaders.

Trump said he is nominating CIA Director Mike Pompeo as Tillerson's replacement, which requires confirmation by the Senate.

"Rex and I have been talking about this for a long time ... we got along quite well, but we disagreed on things," Trump told reporters at the White House. "We were not really thinking the same ... with Mike, we have a very similar thought process."

State Department officials, on the other hand, said they were caught off guard.

"The secretary had every intention of remaining because of the tangible progress made on critical national security issues," said Undersecretary of State Steve Goldstein. "He established and enjoyed relationships with his counterparts. He will miss his colleagues at the Department of State and enjoyed working together with the Department of Defense in an uncommonly robust relationship."

Continued Goldstein: "The secretary did not speak to the president this morning and is unaware of the reason, but he is grateful for the opportunity to serve and still believes strongly that public service is a noble calling and not to be regretted."

A senior administration official says White House chief of staff John Kelly called Tillerson on Friday and notified him that he would be replaced and "that he was being asked to step down. It was made clear that it was imminent." The official added that Kelly and Tillerson had a follow-up conversation on Saturday.

"He was asked to step down," the official said, and he didn't.

Trump and Tillerson have been described as talking often but sometimes appeared quite out of step on major foreign policy decisions.

A White House official says the president wanted to have a new team in place in advance of upcoming talks with North Korea and ongoing trade negotiations.

Tillerson, who was traveling in Africa last week, was caught flat-footed when the surprise announcement came that Trump had accepted an invitation to meet with North Korean leader Kim Jong Un. Just a day earlier, he had told reporters that negotiations were a long way off.

Trump has named Gina Haspel, Pompeo's former deputy and a CIA veteran, to take the helm of the spy agency.

Haspel did not require Senate confirmation to serve in her deputy role but will to serve as the full-fledged director of the agency. Her hearing could exhume many CIA demons about the torture of terror suspects and the secret detention program that followed the 2001 terror attack.

Democrats blasted what they called the nonstop chaos of the Trump White House, which they said meant it cannot focus on conducting business seriously.

"The instability of this administration in just about every area weakens America," said Senate Minority Leader Chuck Schumer, D-N.Y.

But another sometime-opponent of Trump's, Senate Foreign Relations Committee Chairman Bob Corker, R-Tenn., said he would move as quickly as possible to convene a confirmation hearing for Pompeo to run the State Department.

"I had a very good conversation with Director Pompeo this morning and look forward to meeting with him soon," Corker said. "As I shared with the president, the committee will consider his nomination as expeditiously as possible."

Tillerson said at the State Department on Tuesday afternoon that he was grateful for the chance to serve in government and he thanked the foreign service officers and others who work on behalf of the United States abroad.

Tillerson said he wants to arrange an orderly transition to Pompeo, whose Senate confirmation hearing is expected in April and appears to have the support to move into the State Department job.

Tillerson said he has begun delegating responsibilities from his office to that of Deputy Secretary of State John Sullivan.

A former boss of Exxon Mobil, Tillerson didn't know Trump before 2016, and their relationship seemed to rupture after months of disputes over policy, embarrassing leaks and a few public humiliations by the president himself.

Trump told reporters on Tuesday that he and Tillerson had always gotten along and that he was a "good man," but their friction over tough issues such as the Iran nuclear deal had been what compelled Trump to replace him.

The campaign may have been in the works for some time. A Nov. 30 report by The New York Times revealed the existence of a secret plan by Kelly to force out Tillerson and replace him with Pompeo.

For Rex Tillerson, A Rocky First Year As Trump's Secretary Of State

Trump would then nominate Sen. Tom Cotton, R-Ark., to replace Pompeo, according to the Times. As it happened, Cotton is not getting the nomination to lead the CIA, after all.

The report took care to say that the plan was "tentative" and that Trump hadn't yet approved it.

That story followed other evidence that the relationship between the president and the nation's top diplomat was barely functional.

Tillerson earlier said he would not resign in October after an NBC News report said Tillerson had called Trump a "moron" in July after a tense meeting at the Pentagon. Tillerson declined to deny it publicly, and Trump retorted to Forbes magazine that he was ready to compare "I.Q." tests — "and I can tell you who's going to win."

Trump also undermined Tillerson's efforts to find a diplomatic solution to the situation in North Korea. As Tillerson kept up support for talks with Pyongyang over its nuclear and ballistic missile programs, Trump said on Twitter on Oct. 1 that Tillerson was "wasting his time."

"Save your energy Rex, we'll do what has to be done!" Trump wrote.

It was about five months later that Trump agreed to meet with North Korean leader Kim Jong Un.

Tillerson had also distanced himself from what critics have called Trump's equivocation between neo-Nazis and counterprotesters, who clashed over a Confederate monument in Charlottesville, Va.

Tillerson appeared Aug. 27 on Fox News Sunday and was asked by host Chris Wallace about the way the international community views the United States following Trump's controversial comments about the protesters and counterprotesters in the wake of deadly violence in Charlottesville.

"We express America's values from the State Department," Tillerson said. And later: "The president speaks for himself, Chris."

Tillerson's departure makes him the latest member of Trump's inner circle in the administration to step down — following a series of White House aides, starting with national security adviser Mike Flynn and continuing on to chief strategist Steve Bannon, press secretary Sean Spicer, chief of staff Reince Priebus and chief economic adviser Gary Cohn — who have left their posts amid administration turbulence.

In September, Health and Human Services Secretary Tom Price was ousted over a travel expense scandal.

Tillerson leaves behind a State Department that critics have called a shadow of its former self because of Tillerson's disconnection from the department and the White House's antipathy toward appointing or keeping top talent in the nation's diplomatic ranks.

A Diplomat On The Reported 'Hollowing Out' Of The State Department

A Diplomat On The Reported 'Hollowing Out' Of The State Department

Some ambassadorships as well as top jobs at the department's Washington headquarters remain vacant.

And speculation has swirled for so long that Tillerson might quit that this isn't the first wave of discussion about prospective replacements. A previous go-round centered on Nikki Haley, the U.S. ambassador to the U.N. and former governor of South Carolina. The New York Times reported there was tentative talk that Trump might appoint his daughter, Ivanka, as Haley's replacement at the U.N.

For now, Haley remains in her post in New York and the Ivanka narrative appears to have cooled.

Tillerson's tenure as America's top diplomat was unlikely. Trump interviewed more conventional candidates, including 2012 GOP presidential nominee Mitt Romney, but he ultimately gave the nod to the Texas oilman Tillerson based on a recommendation from former Defense Secretary Robert Gates.

Trump Gets His Man At The State Department

Tillerson told interviewers early on that he hadn't been looking for the job and was "stunned" to get Trump's offer — but his wife, Renda St. Clair, sold him.

" 'I told you God's not through with you,' " as Tillerson recounted his wife's remarks.

Tillerson had no government experience; he went to work in 1975 for Exxon Co., as it was then known, as an oil production engineer. But having risen to become CEO of the descendant Exxon Mobil, he effectively served as a kind of head of state — not only running the energy behemoth, but also conducting its foreign policy around the globe where it drilled or refined or conducted other operations.

That work brought Tillerson into contact with all manner of leaders, including Russian President Vladimir Putin, who awarded him Russia's Order of Friendship in 2013. Trump and Tillerson met with Putin and Russian Foreign Minister Sergey Lavrov in Germany in June, and then Tillerson continued follow-up negotiations with Russia until his departure from office.

As secretary of state, Tillerson belonged to a cadre of leaders who sometimes preceded Trump on international travel to assuage allies' concerns about him. Or they returned after his visits to try to smooth things over.

Tillerson, Vice President Pence, Defense Secretary Jim Mattis and others emphasized conventional points about American commitment to allies and to international norms and other longstanding points — often after Trump appeared willing to flout them.

At the same time, Tillerson stayed in lockstep with the president on many matters of policy. He defended to the State Department press corps, for example, the realism that he said underpinned the administration's new strategy focused on Afghanistan, which amounted to the new goal of playing to a draw.

"I think the president was clear this entire effort is intended to put pressure on the Taliban to have the Taliban understand: You will not win a battlefield victory. We may not win one, but neither will you," he said.

At the same time, however, the new Afghanistan strategy will remain one of Tillerson's most significant elements of unfinished business. It depended upon a broad new diplomatic campaign across South Asia involving pressure on India and Pakistan to help with a good outcome in Afghanistan — even though, at the time, the United States did not have active ambassadors in India or Afghanistan.

A previous version of this story incorrectly said Vladimir Putin awarded Rex Tillerson the Order of Friendship in 2008. He was given the honor in 2013.