Accessibility links
The Flag Still Flies For Jasper Johns As a major retrospective in Los Angeles shows, the modern American artist got us to take a second look at even common objects like numerals, archery targets and, yes, flags. 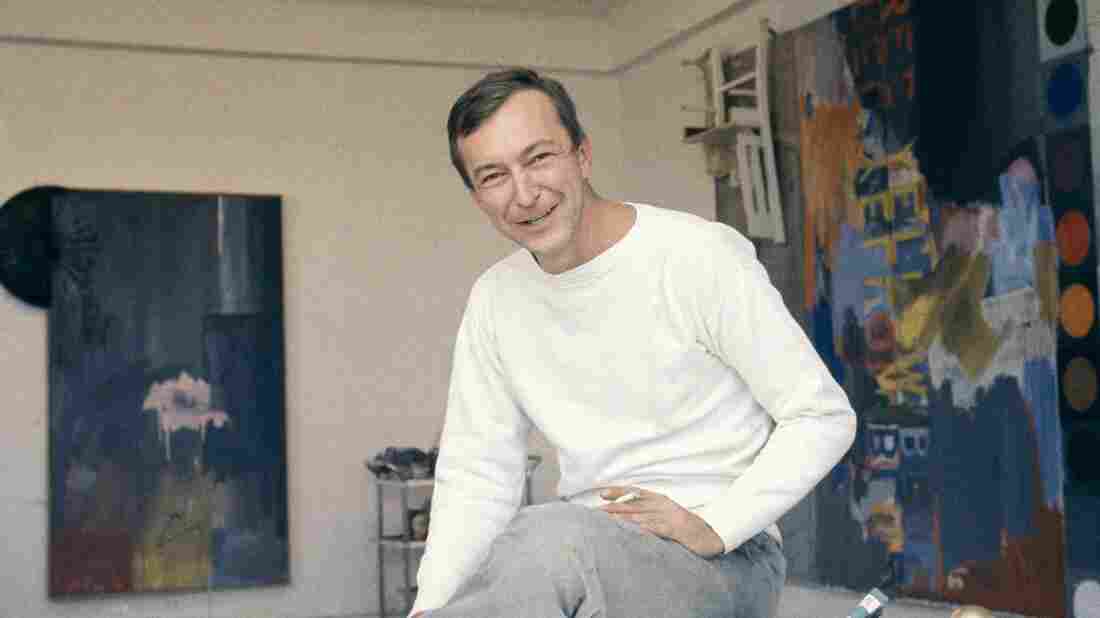 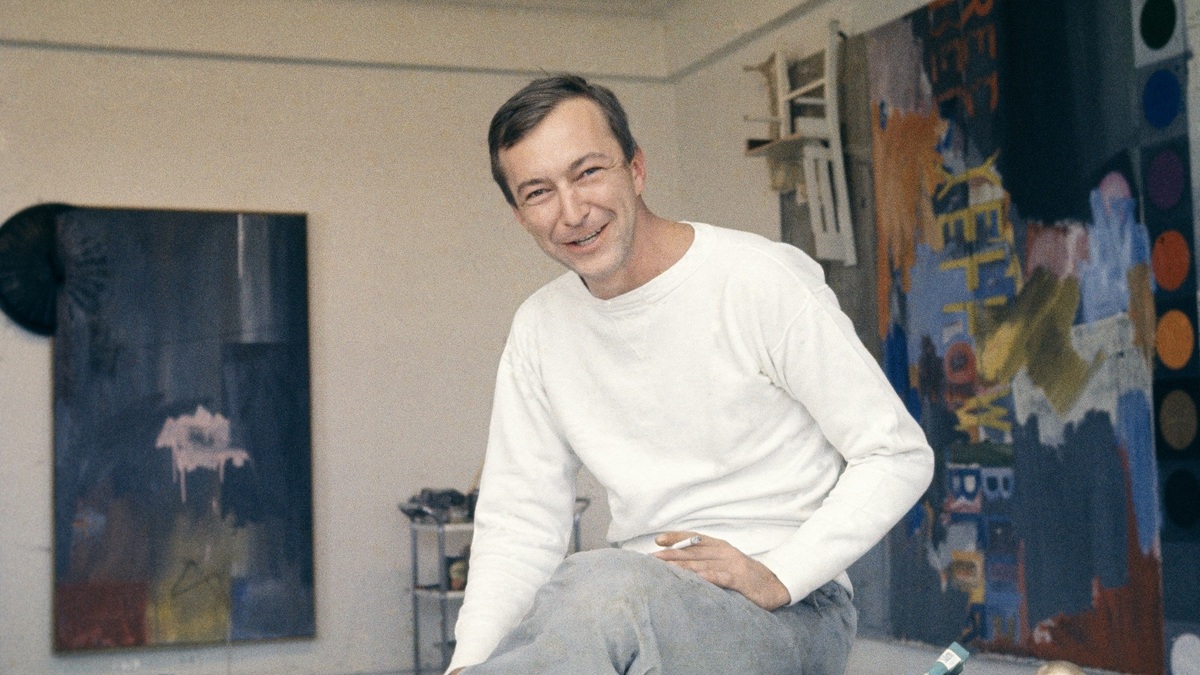 Jasper Johns, pictured in his New York City studio in 1964, was known for transforming common objects like flags, numerals and archery targets into unsettling paintings.

A guide at the Jasper Johns exhibition at The Broad museum in Los Angeles smiles. Then she urges: "Go look at that one."

Brianna MacGillivray points at "Flags," from 1965. The painting is enigmatic, yet direct — much like the artist.

He's painted two rectangles on a gray background. The top one has black stars against an orange background; the stripes are black and green. There's a tiny white dot on one of the green stripes. Below this rectangle is another one, all gray. 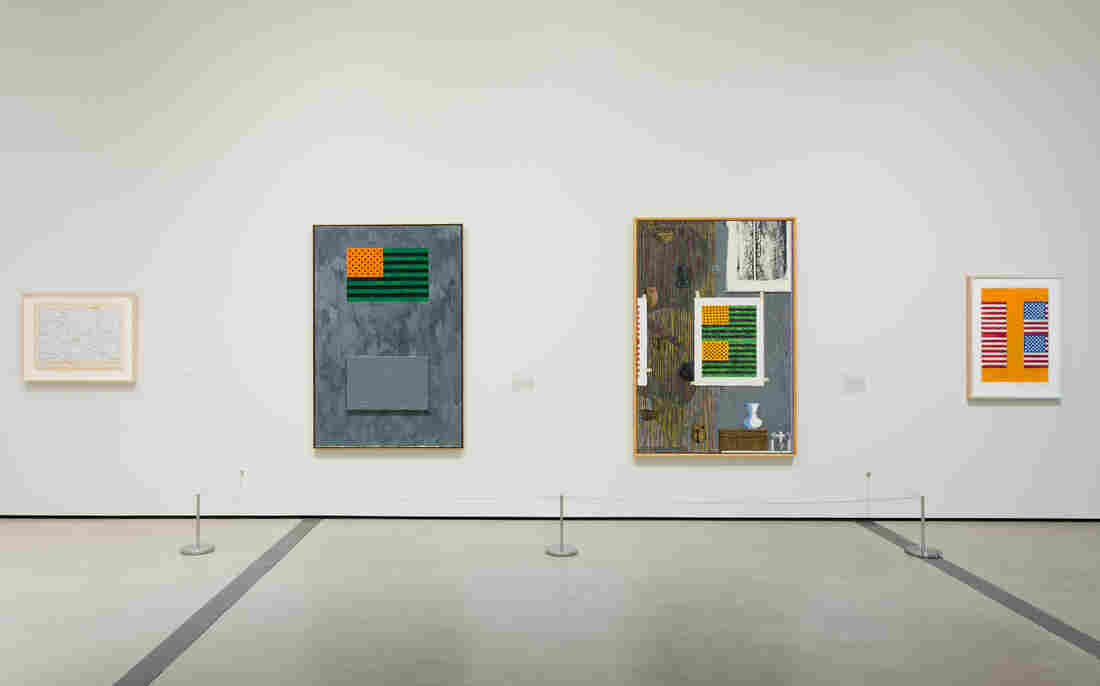 As exhibited at The Broad, Jasper Johns' "Flags" from 1965 (center-left) sits next to "Ventriloquist" from 1983. Pablo Enriquez/Art © Jasper Johns/Licensed by VAGA, New York, N.Y. hide caption

"It's kind of like an optical illusion, where you see colors that aren't really there," MacGillivray says. "If you focus your eyes on the dot, you start to see red and blue on the flag that's painted in grey below."

Green and red are complementary colors; so are orange and blue. Look at green and orange long enough and you see red stripes and a blue field of white stars. Really!

Ed Schad is co-curator of the exhibition — a collaboration with the Royal Academy of Arts in London. "I actually love it because it produces a flag that, for all intents and purposes, is not there," he says.

Johns has made some 40 paintings of flags. The first came out when he was just 24, and it put him on the road to fame. (Some years ago, a Jasper Johns flag went for $36 million.)

"I think it was a way to take something that we're already emotional about and get into how we see it," Schad says.

Viewers do have emotional reactions to the American flag. Some feel patriotic, or proud, angry, nostalgic. Here's what Jasper Johns once said about his flag paintings.

"One night I dreamed I painted a large American flag," he said. "And then the next morning I got up and went out and bought materials to begin it."

The materials included paint, of course. But there was also melted wax, into which he mixed color pigments (a technique called encaustic), and strips of newspaper. His stripes are bumpy, dimensional. It's a painting, but also sculptural. 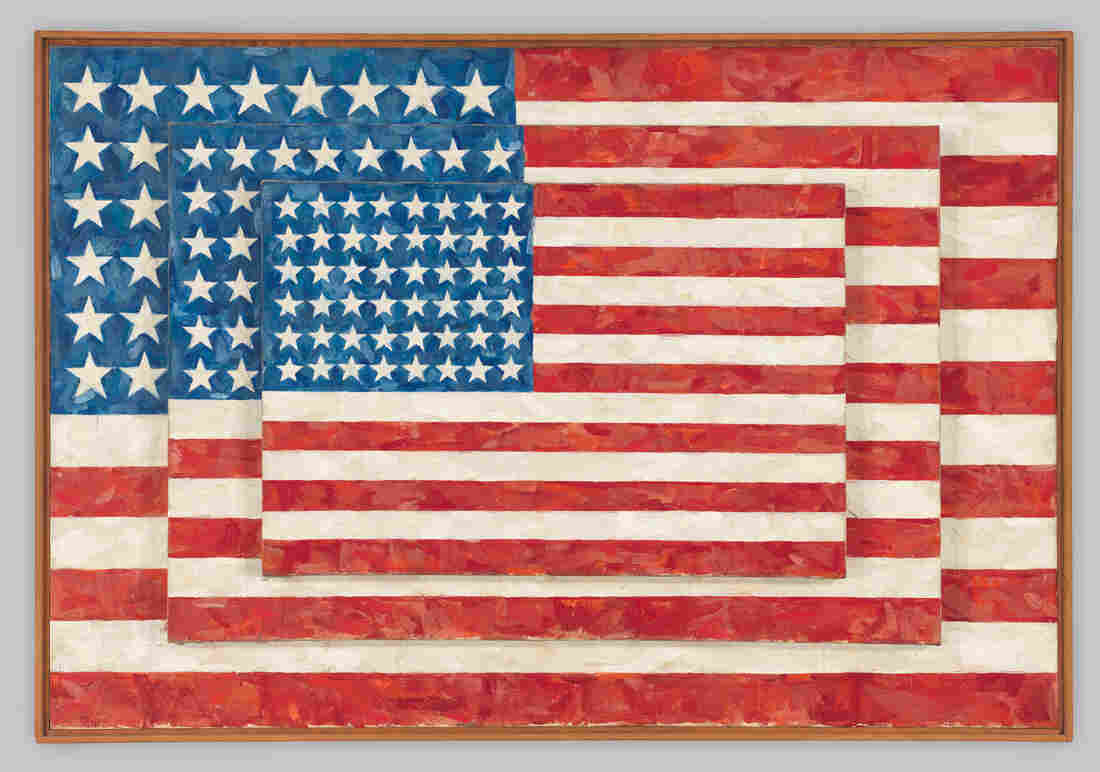 The Broad's director, Joanne Heyler, says that this was original, on Johns' part. It was a challenge to the ropes and splatters of paint that Jackson Pollock and the abstract expressionists had done.

Johns was making something new: recognizable, but different. And in Johns' hands, flags — sacred objects to many — are a bit off-putting, intentionally. He paints, in his words, "things the mind already knows" and makes us see them differently.

"Trying to take you off your guard a little bit as a viewer — slow down and look in a new way," Heyler says.

The motivation? Hard to tell. Jasper Johns, age 87 now, doesn't like talking about his work. But in 1964, he jotted this in a notebook: "Take an object / Do something to it / Do something else to it. [Repeat.]" Which pretty much sums up his artistic philosophy!

"He is a master of understatement in a way," Heyler says. "But you know, his directness, also kind of like his paintings of American flags, also contains a great deal of complexity." 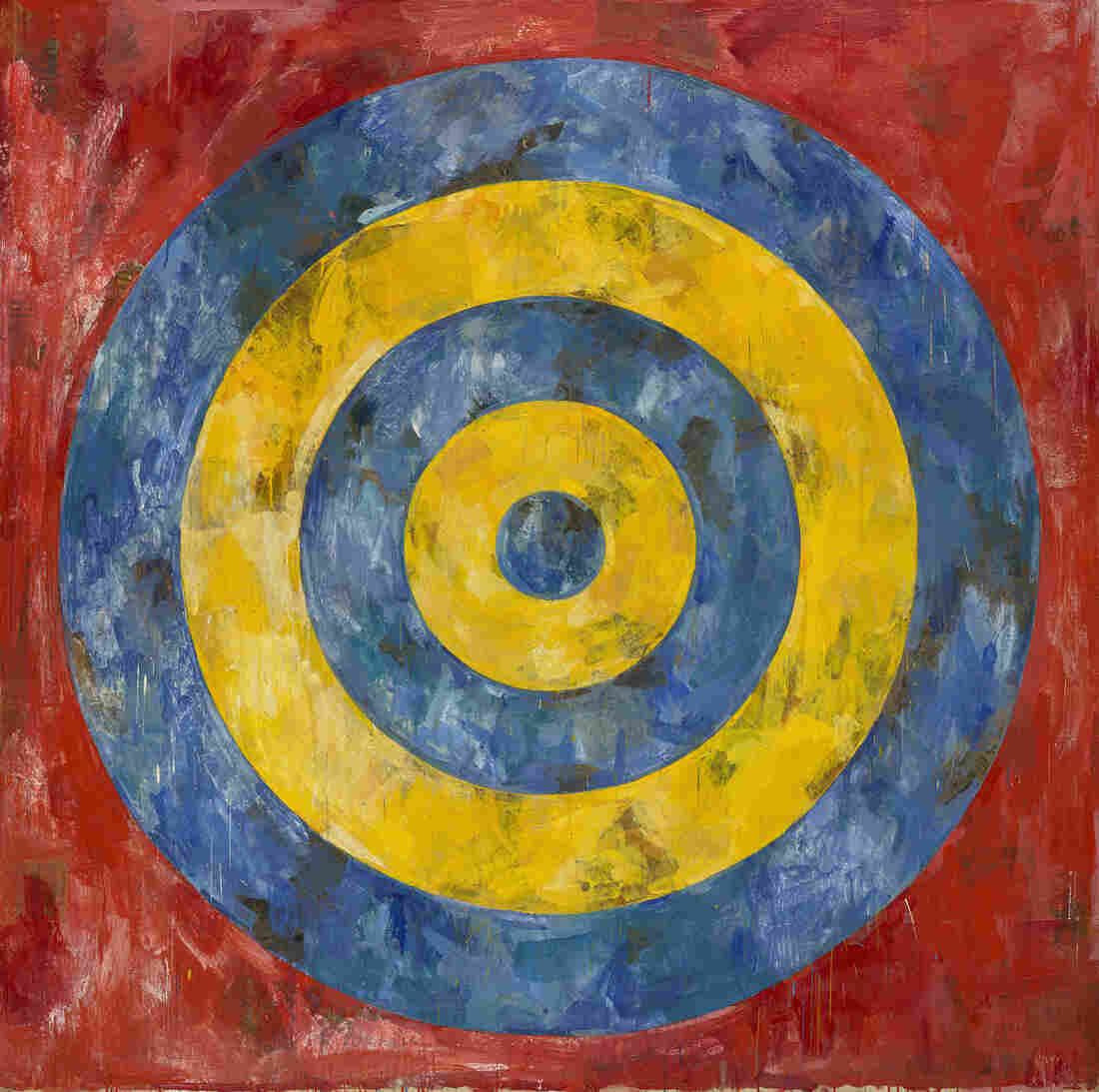 So do his Target paintings. That is, archery targets. Concentric circles in various color combinations — blue, yellow and red; or just blue and yellow; or all white. That last one is actually gorgeous — very textured and layered — and un-nerving.

A target can make a viewer nervous — scared.

"I think that that would be a just reading," Schad responds. "There was a critic, unfortunately I can't remember who it was, but they said something equivalent: 'Jasper Johns can make you feel uncomfortable in your own kitchen.'"

Which may explain why they linger in the mind. The flags and targets provoke reactions. Jasper Johns' later work — and there's lots of it in this exhibition — is often more abstract, with rich colors.

Especially glorious is the art he made while he and the late, great artist Robert Rauschenberg were lovers in the 1950s. Their break-up turns Johns canvases gray for a while.

Then he finds color again, and new obsessions and explorations.

Is he still painting flags? Heyler, The Broad's director, says: "Who knows." 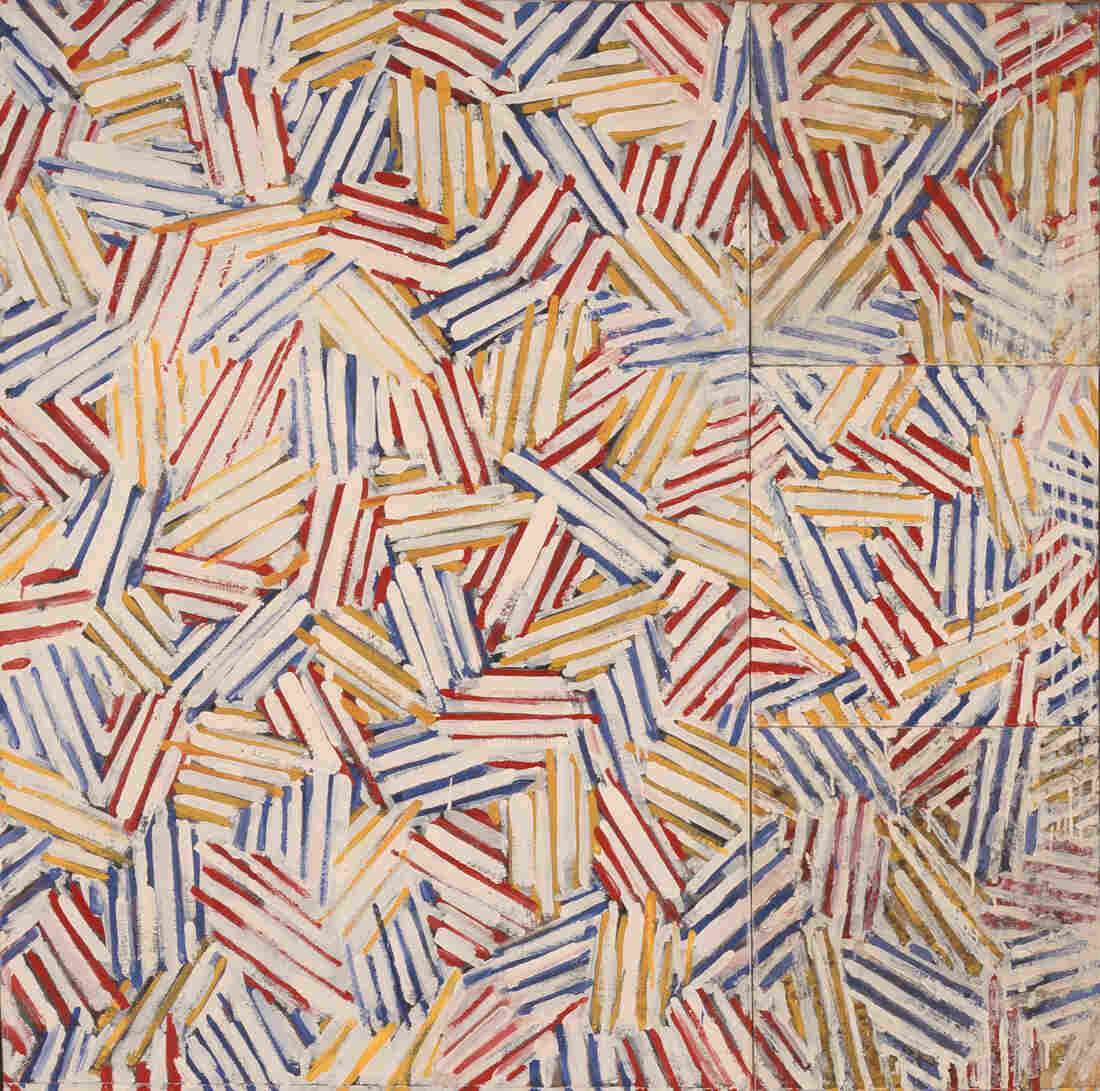