Accessibility links
4 Questions Ahead Of The Special Election In Pennsylvania President Trump won the congressional district by 20 points in the 2016 election. But the race is close, and Republicans are spending heavily to try to stave off a public relations disaster. 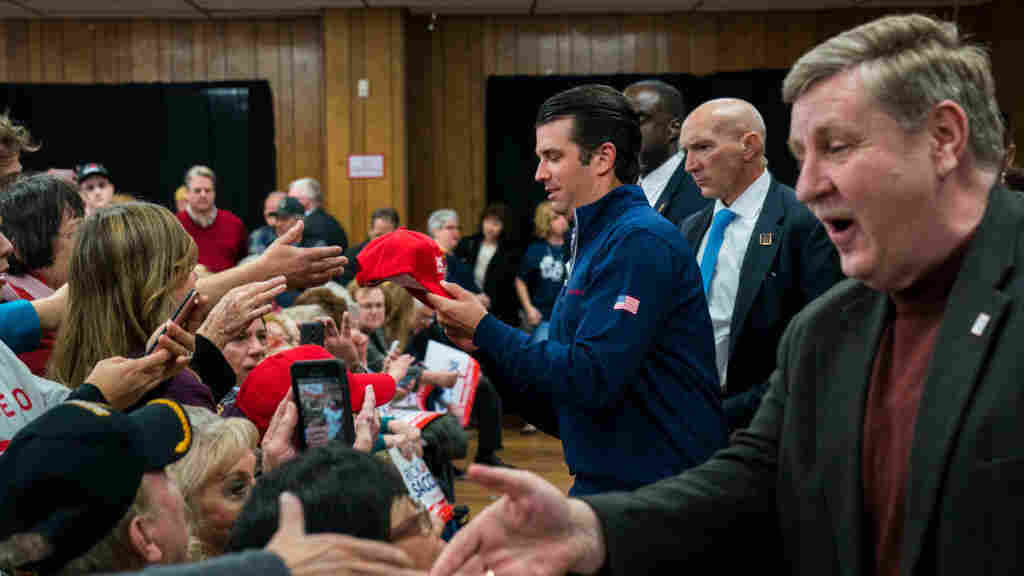 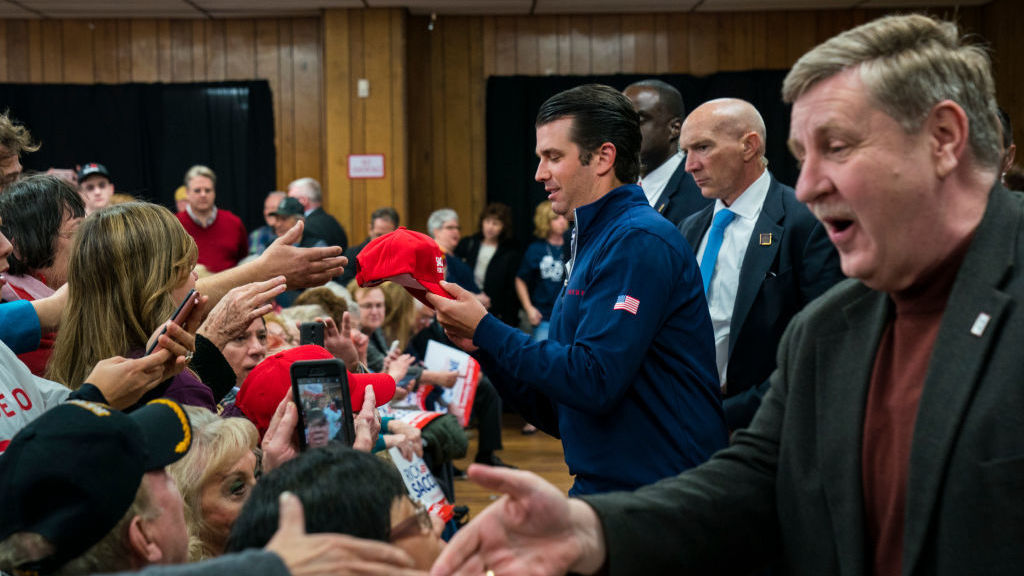 Tuesday's neck-and-neck special election in Pennsylvania's 18th Congressional District carries a lot of weight for both parties — despite the fact that it won't even exist in its current iteration come November.

Republicans have gone all-in to try to save underperforming state Rep. Rick Saccone. The GOP nominee got an eleventh-hour rescue-mission visit Saturday from President Trump, who carried the district by about 20 points in the 2016 presidential election. GOP-allied groups have poured in more than $10 million to help Saccone, who has underwhelmed in fundraising. If that's not enough to save him, it would be an embarrassing and alarming loss for Republicans eight months from the midterm elections.

Meanwhile, even Republicans privately concede that Democratic nominee Connor Lamb — a charismatic, young former Marine and prosecutor — is the superior recruit. He has brought in far more money than the GOP candidate in this traditionally solidly red district near Pittsburgh. Lamb has raised $3 million in the race, while Democratic outside groups stayed mostly on the sidelines. They have put in only about $1.7 million, allowing Lamb to run a more independent race.

Lamb has cut a moderate profile with a populist tinge. He has said he would oppose Nancy Pelosi as Democratic leader and has also wooed steelworkers, coal miners and union activists in this blue-collar district. He has a somewhat similar economic message to that of Trump when he campaigned and won here.

This special election was triggered by the resignation of former Rep. Tim Murphy, who stepped down after it was revealed that he — an anti-abortion-rights congressman — had had an extramarital affair and pressured his mistress to terminate a possible pregnancy.

Because of court-ordered redistricting, the district as it is drawn now will cease to exist come Election Day 2018, and neither Saccone nor Lamb will even live in the rejiggered seat. So the fact that Republicans are spending so heavily to save what's essentially a phantom district underscores what is on the line: They don't want a loss in such a GOP stronghold to spur even more panic among their ranks that Trump is dragging them down.

Meanwhile, Democrats are salivating for an upset that will further galvanize their energetic base hoping for a blue wave in November. To this point, since Trump has been president, Republicans have underperformed in GOP-held House special elections but still won all five of them.

Polls close at 8 p.m. ET. Here are four questions to ponder in the meantime:

1. Will this be a canary in the coal mine for the GOP?

A few months ago, when a rash of retirements seemed like the latest alarm bells for Republicans, GOP strategists urged caution. Some pointed to this Pennsylvania race — where Saccone was still heavily favored — as the possible canary in the coal mine to watch for Republicans. This race, they said, could be a much bigger sign of danger ahead for the GOP.

If Lamb does win on Tuesday night, it could send even more GOP members of Congress heading for the exits, adding to what's already a record number of retirements.

The ominous signs have been there for some time for Republicans. Since Trump's election, 39 state legislative races have flipped from red to blue. Democrats notched big wins last November in both the Virginia and New Jersey governors' races.

And special House elections last year across the board showed a major shift toward Democrats, even if they didn't notch a victory in a GOP-held race yet. Republicans have far underperformed in special elections in Kansas, Montana and South Carolina — all solidly GOP territory. 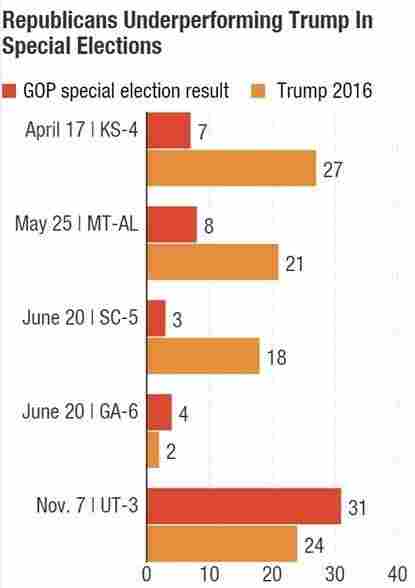 Democrats did score a major upset in December in the Alabama Senate race, flipping a seat in a state that Trump carried by nearly 30 points. In that contest, Republicans were running a deeply flawed candidate in GOP nominee Roy Moore, long a controversial figure in state Republican circles. Several women accused him of sexual misconduct and pursuing them romantically when they were teenagers and he was much older.

Republicans are already trying to paint Saccone as a weak candidate, but blaming him for underperforming is hardly a credible excuse in such a Republican area. It would instead be a sure sign of danger ahead, at least in the narrative that would form about 2018: what it would mean for GOP morale, fundraising and the power of the president to help candidates over the line.

No race is a perfect predictor, and Republicans will also surely note that before their own massive wave in 2010 that helped them capture control of the House, there was another Pennsylvania special election that went Democrats' way. That race certainly was no sign of their fortunes come November.

Still, there's been more than enough evidence in the 16 months since Trump was elected that the energy on the Democratic side is very real. Now, a Lamb win would mean that even areas that were once considered safe GOP territory might no longer be.

2. Is the Trump coalition transferable?

Trump rode into town Saturday night in nearby Moon Township to campaign for Saccone. He had a trademark wild and unpredictable rally to help Saccone. He boasted that he was able to help save the Georgia special election in a similar fashion and later tweeted about it:

The president even gave the Democratic nominee his own Trump-branded nickname, "Lamb the sham." He made the case for Saccone, who has run as an unabashedly pro-Trump candidate, before turning to myriad other topics and insults.

It was all classic Trump — eager to claim credit despite scant evidence he helped move many poll numbers, as in Georgia. He didn't mention other places where he has gone in and lost — like Alabama, where he first backed the losing primary candidate and then failed to get Moore across the finish line.

For Trump, every day is Nov. 8, 2016. He revels in reliving that historic night and boasting of his unexpected victory over Hillary Clinton. But now Tuesday night could show whether Trump's winning coalition is transferable to other candidates — or not. 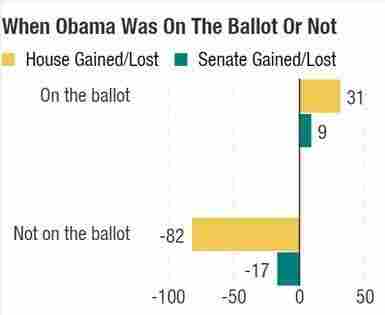 President Obama wasn't able to help Democrats much during his tenure when his name wasn't on the ballot. Domenico Montanaro/NPR hide caption

Obama's popularity dropped during his tenure, and he was, indeed, a drag on his own party in 2010 after the Affordable Care Act passed. But Obama's numbers were stronger than Trump's, and there wasn't the constant chaos and scandal plaguing the current White House.

Ultimately, Trump's unpopularity remains the biggest detriment for Republicans in the midterms. It raises the question of how Trump could be — or is willing to not be — dispatched on behalf of Republicans on the trail over the coming months. That will be even more acute if Saccone loses. Even places like the Rust Belt where he was once seen as an asset may not be a given any longer.

While Trump doesn't like to be associated with anything losing, he also never passes up a chance to get before a crowd. So while he may salivate at campaigning more, it could be hard for anyone in the GOP to make the case to the president he would hurt more than help.

Republicans have already been trying to downplay expectations ahead of a loss too, with Pennsylvania GOP Chairman Val DiGiorgio making the stunning argument on Fox News Monday that "this is a Democrat district" despite Trump's heavy win — even though past GOP presidential nominees also performed similarly and Murphy routinely won re-election easily, or even went unopposed. A Democrat hasn't won here in 15 years.

3. Can the economy and tax bill save Republicans — or not?

The silver bullet for Republicans in the midterms could be the positive economy — and the GOP tax cuts they passed last year that are growing in popularity.

Yet that argument wasn't used much in the final stretch to help Saccone in Pennsylvania. Early ads touted economic growth and the tax overhaul, while hitting Lamb for downplaying the impact of the tax cuts. But in the final stretch, that message was abandoned for much more ominous ads hammering Lamb over immigration and crime.

That was the same dark turn Republicans took in Virginia last fall — a gambit that failed. So if that's their closing message, it's a sign that the political boon they hoped to gain from an economic boom might not be working. And, as much as Democrats haven't figured out messaging on the tax bill, Republicans may not have either.

One of the unknowns is how the recently announced tariffs could affect the race. Areas like the 18th District, where blue-collar Democrats crossed party lines to vote for Trump, have been hard hit in an age of globalization. Trump's imposed tariffs on steel and aluminum would seem to be tailor-made to boost political support in economically distressed areas like this.

However, a Monmouth University poll (taken before Trump's visit), which showed Lamb with a narrow lead — both under regular- and high-turnout scenarios — found the tariff announcement didn't seem to sway voters at all. Plus, both Saccone and Lamb have been supportive of the tariffs. 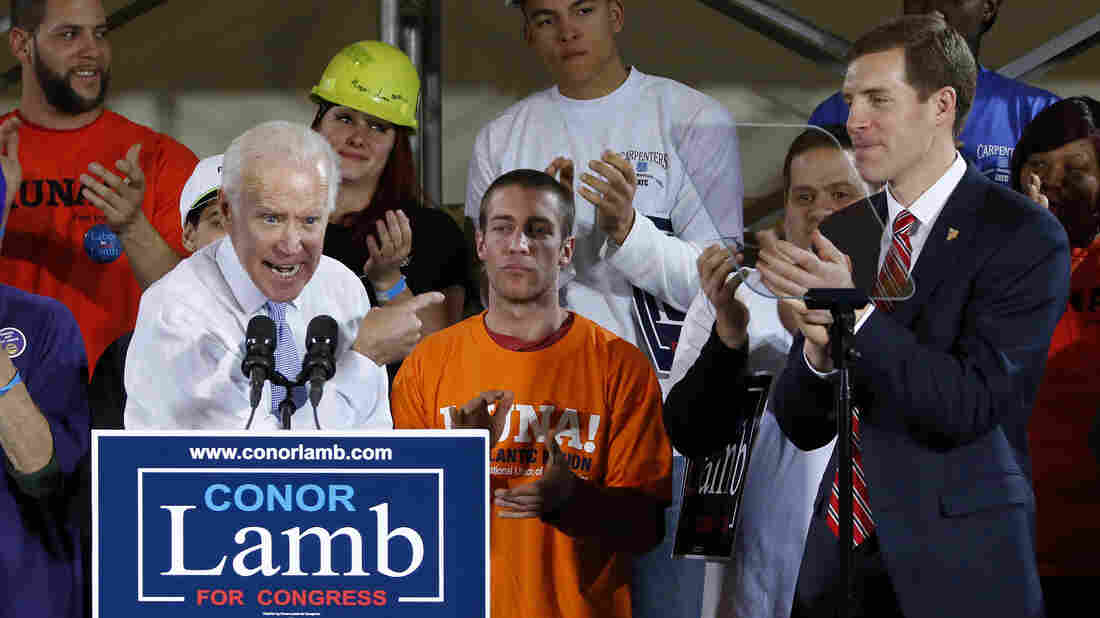 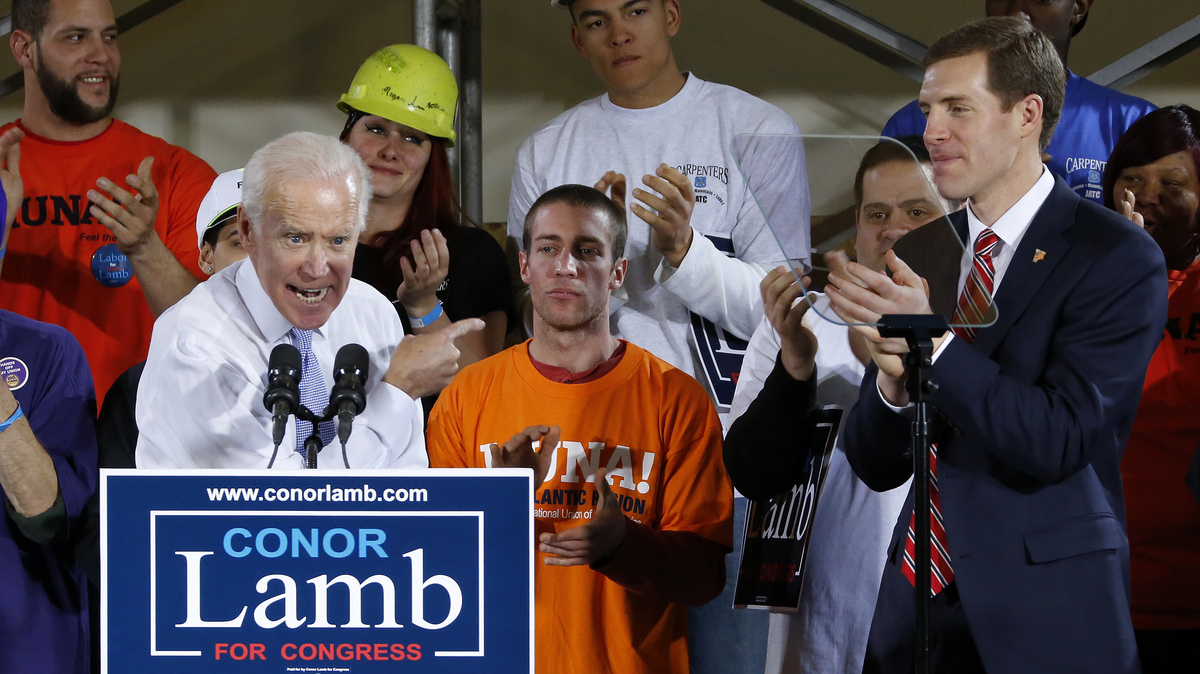 Lamb has run a more centrist campaign and underscored local issues. That has helped him close the gap and win crossover Republicans. But this race is also a test of whether Democrats can blunt what has been one of Republicans' most effective weapons — Nancy Pelosi.

Lamb has run ads boasting about how he would oppose Pelosi as Democrats' House leader — or even speaker — if he is elected, echoing pushes by like-minded legislators such as Ohio Rep. Tim Ryan and Massachusetts Rep. Seth Moulton in calling for new leadership. And the surrogates he has had campaign for him, like former Vice President Joe Biden, have a much different appeal to voters in this area than the San Franciscan could.

Nevertheless, Republicans have been repeatedly able to turn Pelosi into a political bogeyman, dragging down surging candidates by tying her to them. It was a strategy they first employed successfully in 2010 — and replicated it. They most recently used it in last year's Georgia special election.

Ads from outside GOP-aligned groups have continued to argue that Lamb would still be a Pelosi lackey even though he says now he wants new leadership. But if Lamb is able to survive being linked to Pelosi, it could be an encouraging sign for Democratic candidates across the country, some of whom have already signaled they want new leadership, as well.

Pelosi remains a fundraising machine for the Democrats, and she still wields considerable influence. But if Democrats want to win back the House, a Lamb win might show they need more candidates like the Pennsylvanian in conservative areas who are willing to buck the status quo and go against party leadership.

And that could raise even more questions of who will be in the leader's chair come 2019.