Accessibility links
House Intelligence Democrats Release Response To GOP Russia Conclusions Democrats say it was premature for Republicans on the House intelligence committee to conclude their Russia probe on Monday. That report cleared the Trump campaign of collusion with Russia in 2016. 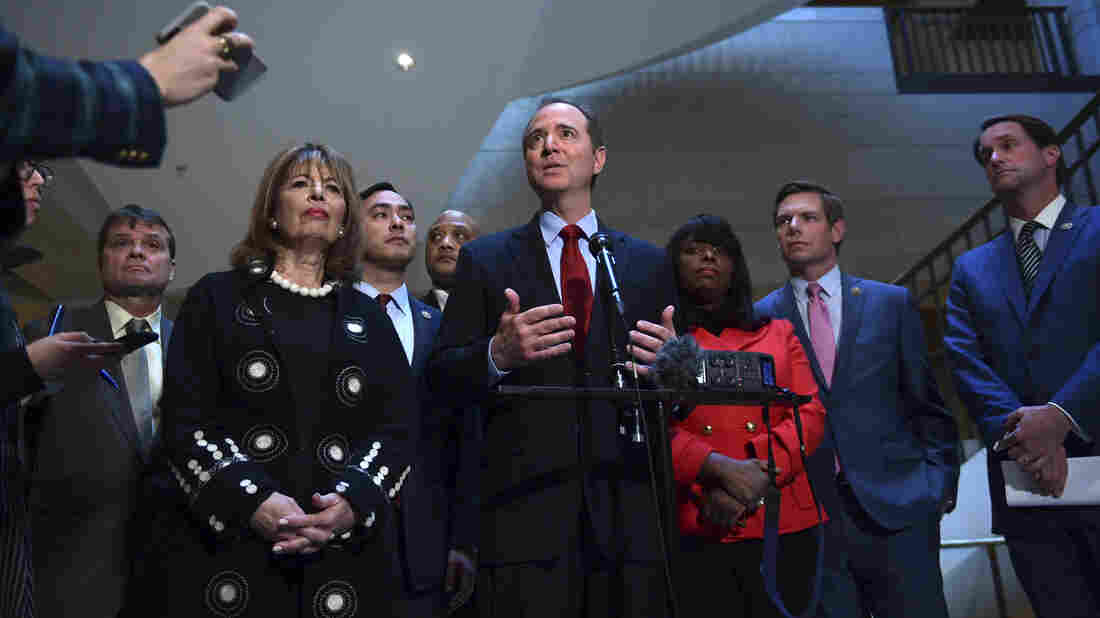 House intelligence committee ranking member Rep. Adam Schiff, D-Calif., speaks to reporters Tuesday on Capitol Hill, joined by other Democrats on the committee as they released a response to GOP conclusions on the House Russia investigation. Susan Walsh/AP hide caption 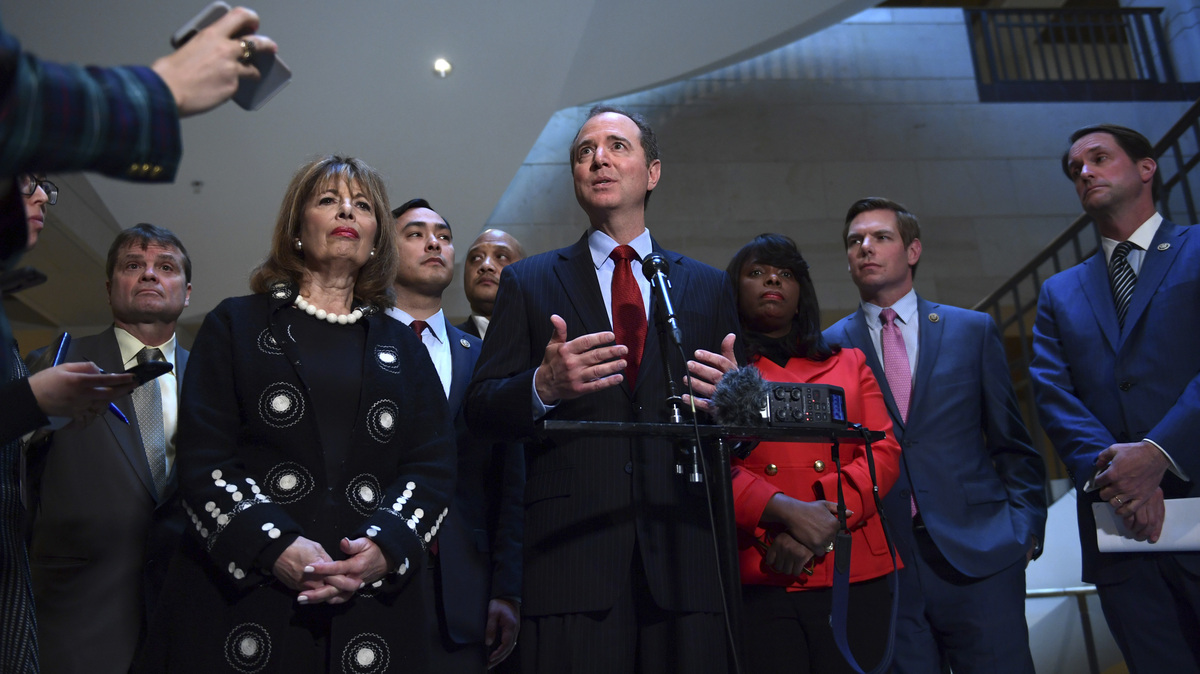 House intelligence committee ranking member Rep. Adam Schiff, D-Calif., speaks to reporters Tuesday on Capitol Hill, joined by other Democrats on the committee as they released a response to GOP conclusions on the House Russia investigation.

A day after the Republican members of the House intelligence committee released their findings from the investigation of Russian interference in the 2016 campaign, which cleared President Trump's campaign of collusion, Democrats from the committee said today it was "premature" for the majority GOP members to conclude the probe, and that they would keep investigating.

Rep. Adam Schiff of California, the top Democrat on the committee, called the Republican decision to shut down the investigation a "terrible disservice to the country and the American people," in announcing the release of a 21-page "status report" that laid out the Democrats' case to continue the probe.

"The decision to shut down the investigation before key witnesses could be interviewed and vital documentary evidence obtained will prevent us from fully discharging our duty to the House and to the American people," the report from the Democrats says.

It then lays out a long list of witnesses the committee hadn't yet interviewed or gotten enough documents from as of Monday, when Republicans on the committee deemed the investigation complete.

The GOP members concluded that staffers of the Trump campaign who met with Russians may have displayed bad judgment, but nothing worse. The report affirmed that Russia was actively waging an "active measures" information campaign against the United States leading up to the 2016 election, but notably disputed that the Russian efforts were intended to help Trump win.

Schiff appeared with fellow intelligence committee Democrats on Capitol Hill Tuesday evening and said the Republicans had put forth a "pretense of trying to find the truth."

"We are going to do our best to continue our work. There are individuals who want to cooperate with our committee and share information, and will continue to do so," Schiff said. "We will be putting together a report that will set out for the country what evidence we have seen to date."

The Democrats' retort is broken up into four sections:

The Republican leading the House investigation, Rep. Mike Conaway of Texas, appeared to back away from the committee's Monday position that it had found no evidence that the Russians tried to help Trump. As Conaway told reporters on Tuesday, "Whether or not they were trying to hurt Hillary, help Trump ... it's kind of the glass half full, glass half empty."

The House Intelligence has hosted a number of high profile open and closed hearings since starting its investigation into Russian interference last year, but it became apparent things were turning partisan when the Republican chairman of the committee, Rep. Devin Nunes, of California, was forced to recuse himself from the investigation last April. Since then, Republicans and Democrats on the committee have essentially been working separate investigations; it's unclear when the Democrats plan to release their own full report.

The full "status update" from the Democratic members of the House intelligence committee is below.