Accessibility links
Trump Cabinet Secretaries Call For Infrastructure Plan The united showing by the members of the president's Cabinet was met with skepticism from Democrats on the Senate Committee on Commerce, Science and Transportation. 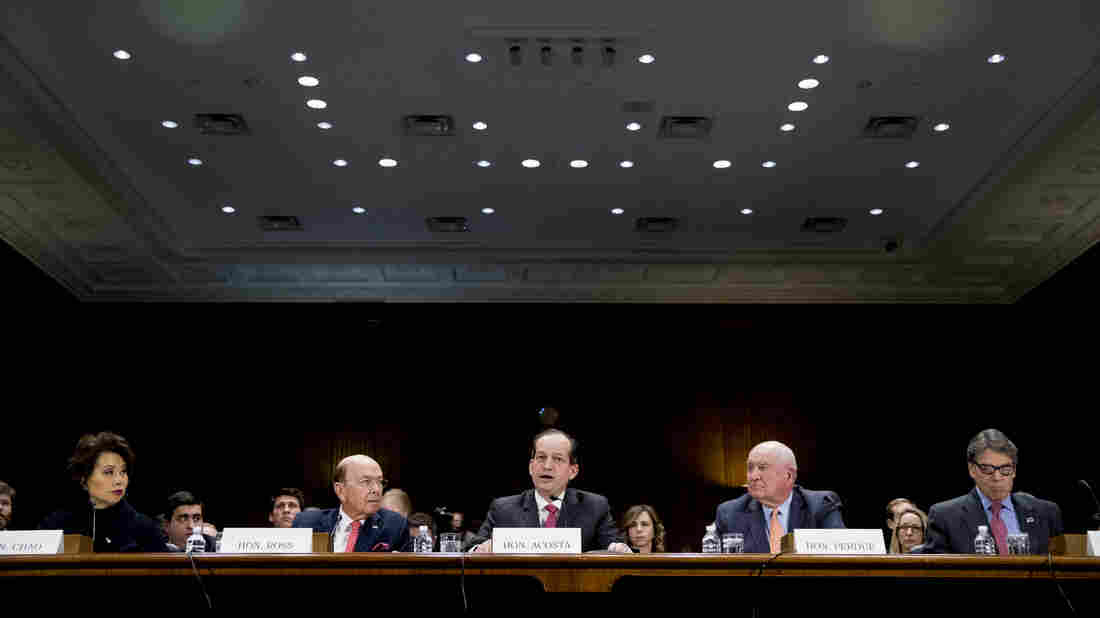 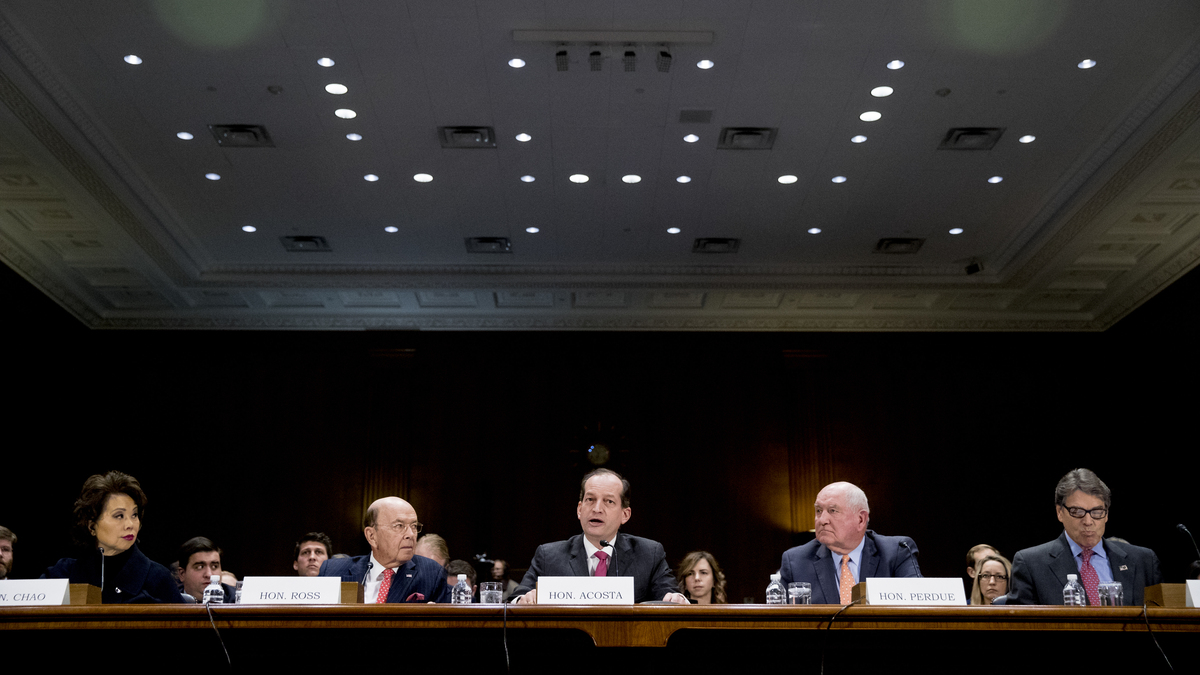 The Trump administration sent an all-star team of five Cabinet secretaries to a Senate hearing Wednesday to talk up its infrastructure proposals. But not even the combined talents of the secretaries of Transportation, Commerce, Labor, Agriculture and Energy seemed enough to move the ball on the $1.5 trillion plan, and it remains unclear whether the measure will ever find its way to a vote in the House or Senate.

Senate Commerce, Science and Transportation Committee chairman John Thune, R-S.D., said he was hopeful that "both sides can come together on this and it can happen this year."

But several unanswered questions remain, chief among them where the $200 billion in federal funding would come from and where states would find the remainder of the money.

The Trump plan commits $200 billion in federal funding over 10 years to stimulate state and local spending and private investment. Half of the funding, $100 billion, would be used as incentives to entice cities, counties and states to raise at least 80 percent of the infrastructure costs themselves.

That's a departure from the way many projects are funded now. Funding for federal-aid highways, including interstates, is usually allocated in an 80-20 federal-state split. So, President Trump's plan would flip that funding burden. Major mass transit projects are often funded on a 50-50 federal-local basis. Again, the administration's plan puts a much greater burden on local taxpayers and users.

Estimates vary but the American Society of Civil Engineers has opined that there is a $2 trillion investment gap when it comes to the country's infrastructure needs.

"How are you gonna get members of the Senate to vote for the tax revenue in order to pay for these plans?," asked Sen. Bill Nelson, D-Fla., the ranking Democrat on the panel. "We can't toll our way out," he said. Nelson suggested that the recently-enacted tax cut be changed from a 21-percent corporate rate to 25 percent to pay for infrastructure, a non-starter as far as most Republicans are concerned.

Transportation Secretary Elaine Chao said that with some estimates as high as $4 trillion to repair the nation's roads, bridges, ports and airports, "We cannot address a challenge of this magnitude with federal resources alone, or by borrowing." She said the administration was "agnostic" about where the state share of the funds would come from, but said the federal government only owns 10 percent of the nation's roads and bridges, implying it was up to state and local governments to figure out where to find the funds to finance their share of improvements.

Several states have already raised their gas taxes to fund road repairs, and others have instituted new tolls.

Sen. Gary Peters, D-Mich., said Congress and the administration have "got the identification of the problem down cold," adding the challenge is "how we're going to pay for it." The administration's plan, he said was "just smoke and mirrors."

Five of our incredible @Cabinet Secretaries are testifying on the Hill this morning on the need to rebuild our Nation’s crumbling infrastructure. We need to build FAST & we need to build for our FUTURE. Thank you @SenateCommerce for hosting this hearing! #InfrastructureInAmerica

One of the key principles for the administration, said Energy Secretary Rick Perry, was removing regulatory barriers to speed approval of construction projects. Perry called the current permitting process fractured and redundant, saying "it requires projects to navigate a huge maze of federal regulations." Perry said Trump wants to see the process streamlined and "substantially cut back."

Trump Infrastructure Plan Would Pay For A Fraction Of Investment