Accessibility links
Millions Own Gas And Oil Under Their Land. Here's Why Only Some Strike It Rich Gas and oil companies pay royalties to millions of American landowners. But a growing number accuse energy companies of cheating them out of their fair share.

Millions Own Gas And Oil Under Their Land. Here's Why Only Some Strike It Rich

Millions Own Gas And Oil Under Their Land. Here's Why Only Some Strike It Rich 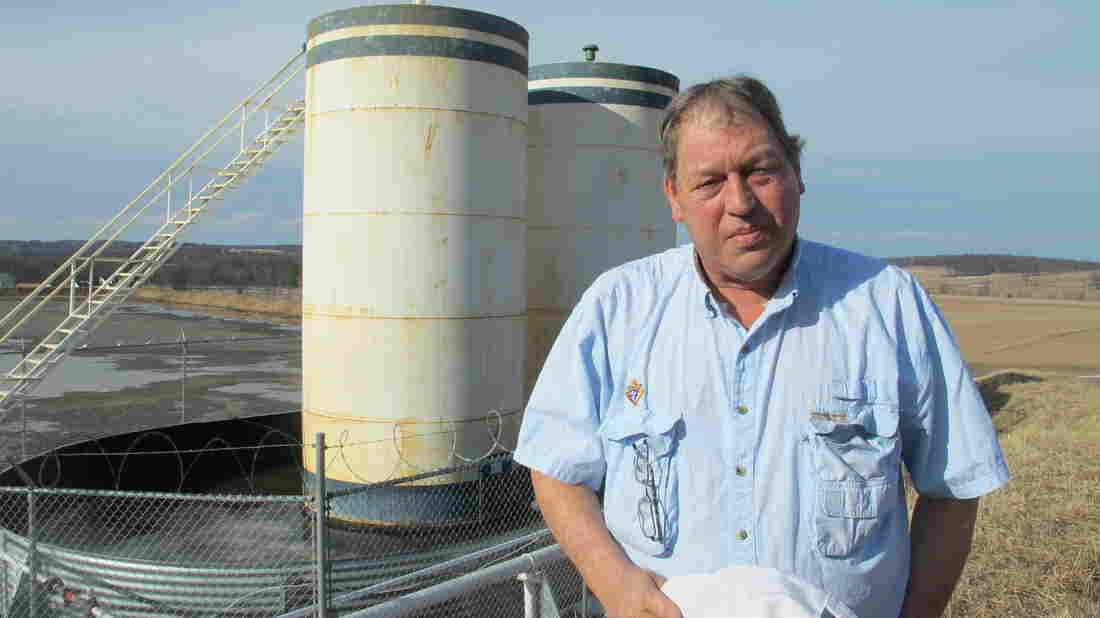 Jim Barrett stands next to a well pad on his farm in Bradford County, Pa. He accuses Chesapeake Energy of cheating him out of royalty money. Marie Cusick/StateImpact Pennsylvania hide caption 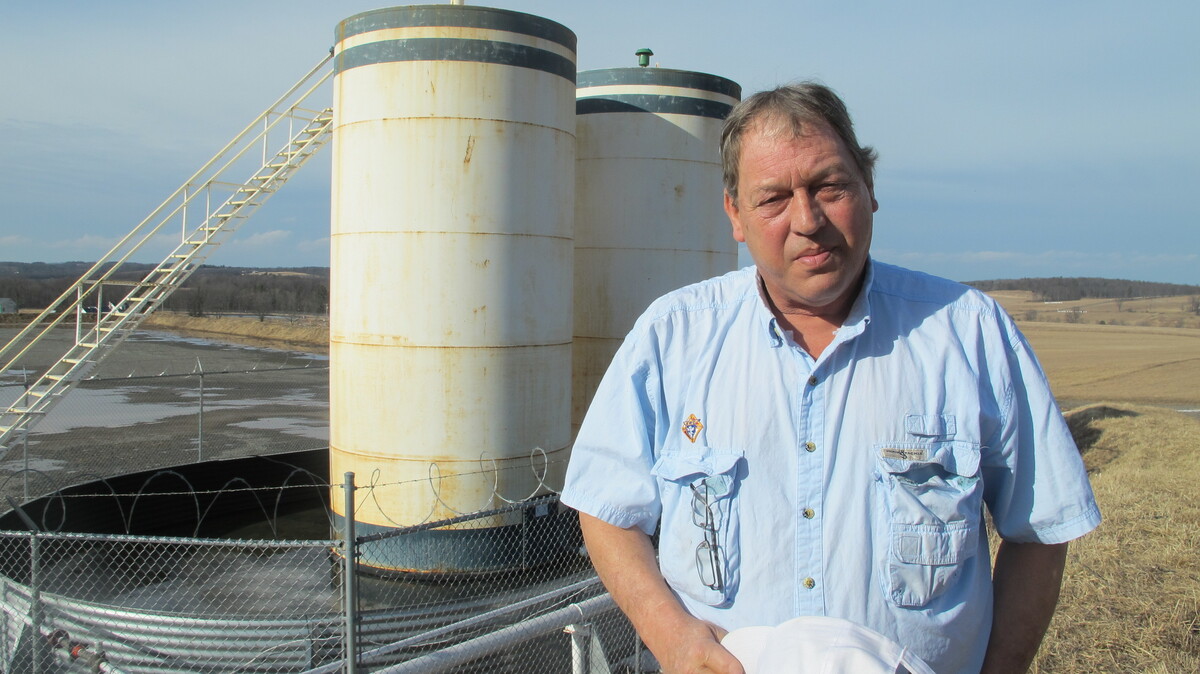 Jim Barrett stands next to a well pad on his farm in Bradford County, Pa. He accuses Chesapeake Energy of cheating him out of royalty money.

The U.S. is one of only a few countries in the world that allow private individuals to own the minerals under their land, a policy that dates to the Founding Fathers as they sought to elevate private interests over those of the British Crown. This financial incentive to allow new drilling goes a long way in explaining the nation's natural gas boom. The National Association of Royalty Owners estimates some 12 million American landowners receive royalties for the exploitation of oil, gas and other mineral resources under their property.

But as U.S. production reaches record levels — it recently surpassed the previous high point in 1970 — a complex web of laws and court rulings is evolving over how these royalties are distributed. That's creating vast differences in how much money property owners actually get and prompting a number of lawsuits accusing energy companies of shortchanging them.

A tale of two mineral owners

This disparity is playing out across Pennsylvania's gas-rich Marcellus Shale.

Clark says it felt like he had "won the lottery," and he is grateful every day for the two gas wells drilled on his dairy farm. He estimates he receives about $10,000 per month in the form of gas royalties.

"This is what we've done with our gas money," Clark says, standing in his new barn filled with cows. "This barn here cost $40,000 to build it, and we were able to build it out of our pocket."

When he was growing up in rural Susquehanna County in the northeastern corner of Pennsylvania, his family used to scrimp and save just to buy basics, like new shoes.

Now, since the drilling rigs rolled into town and he started receiving royalty checks, Clark has a newfound sense of financial security.

"We're living like we used to, but without the stress," Clark says. "The bills are all paid. Your kid's gotta go to college? No problem."

He's a good example of when the royalty process works. It goes like this: Gas companies and landowners sign a lease agreement before drilling begins. The royalty is money paid to the mineral owner, like Clark, for the right to use his resource. It's negotiated to be a certain percentage of the revenue from the sale of the gas.

Clark is leased to a company called Chief Oil and Gas. The company gets gas it needs, and Clark gets paid. But he knows other people with similar gas wells are striking out.

"I thank God every day that it happened here," he says, and not a few miles to the west. 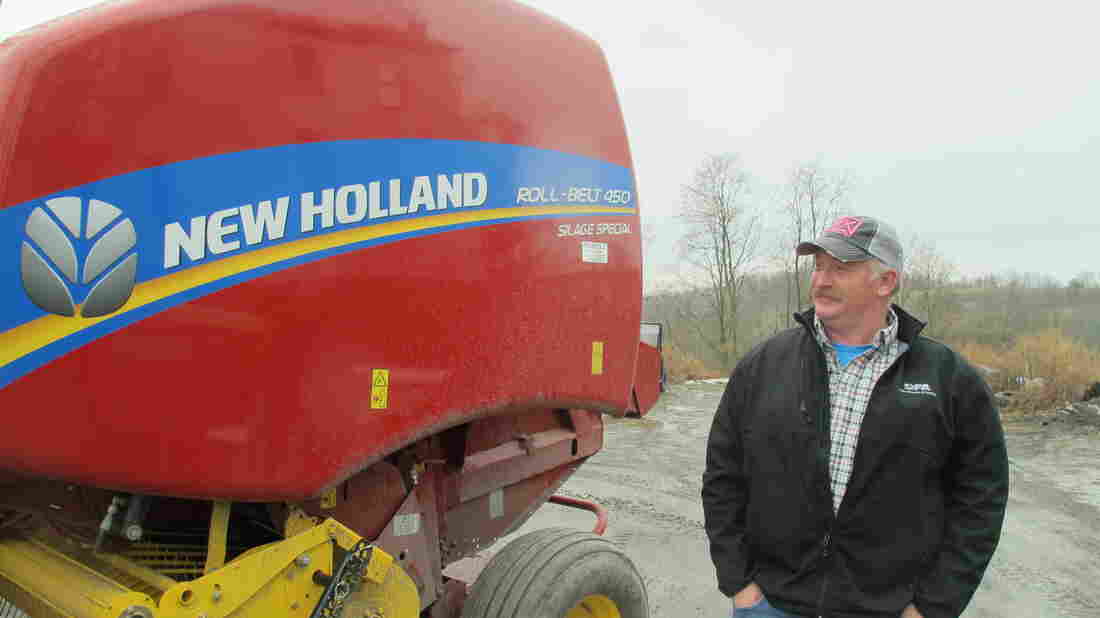 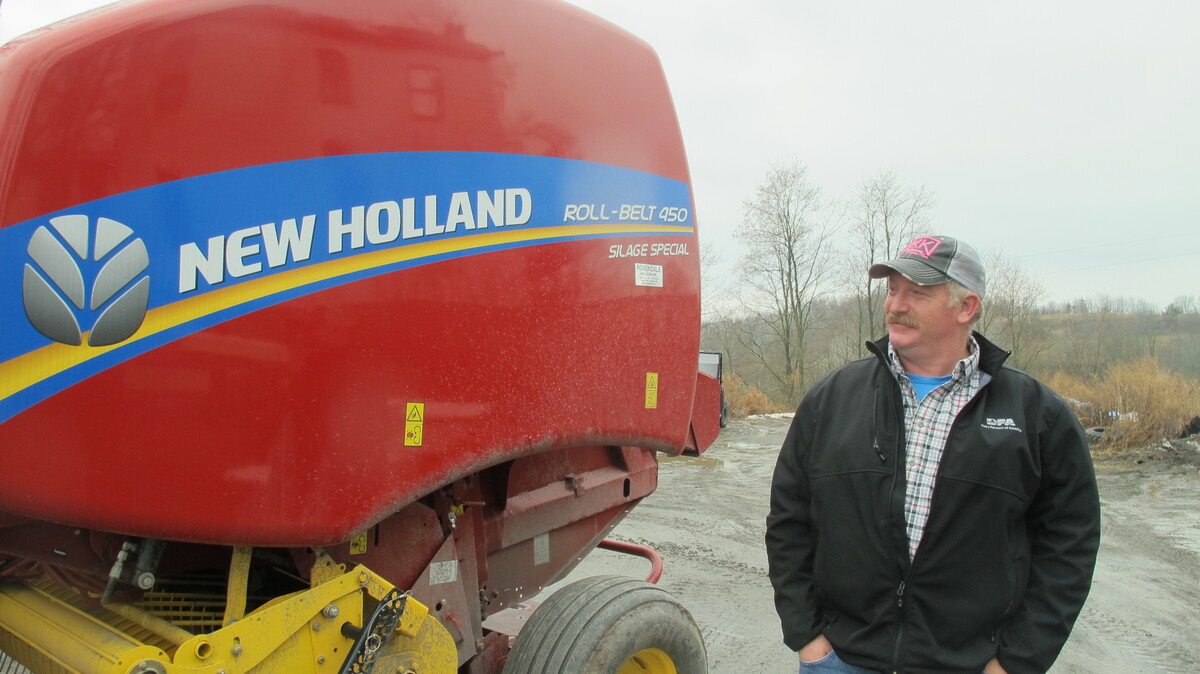 Dairy farmer Charlie Clark bought a new hay baler with the royalties he received from natural gas development on his land.

That's where Jim Barrett lives, about 40 miles away in Bradford County on what he describes as "a pretty typical mountain farm."

"It kept Bradford County alive," he says. If not for the gas industry, he says, his community "would have been a ghost town in 2008 or 2010" after the Great Recession.

But for Barrett, the gas boom has not panned out the way he had hoped.

He says Chesapeake Energy, which operates four wells on his farm, is stealing from him, and he has joined a class-action lawsuit against the company. Chesapeake, which declined to comment for this story, is defending itself against lawsuits in at least seven states for allegedly underpaying royalties.

By Barrett's calculations, Chesapeake owes him hundreds of thousands of dollars for the gas it has pumped out of his farm. The company has said in the past that it is committed to working with its royalty owners to answer questions.

Clark and Barrett might have started out with similar hopes, but their different experiences show how tough it can be for landowners to navigate the gas business and how resolutions are hard to come by.

Much of the controversy surrounding royalty money boils down to a concept known as post-production costs: the expenses of moving and treating gas through a network of pipelines. To cover the costs, drillers might take deductions from royalty checks.

Some landowners agree to that, while others negotiate a lease that prohibits it, says attorney John McFarland, who represents landowners with the Texas-based law firm Graves, Dougherty, Hearon and Moody. Many others sign leases that don't address it at all. Even when possible deductions are addressed, McFarland says, the lease language can be vague. That leaves room for a gas company to take deductions even if a landowner objects.

Disputes over post-production costs have popped up all over the country as oil and gas production has soared, the result of new horizontal drilling and fracking technologies that allow drillers to tap into shale rock.

By 2014, the United States was producing so much oil and gas that it led to a global oversupply. That's when complaints over these deductions really started to roll in, says Gary Preszler, vice president of the National Association of Royalty Owners board.

Many energy-producing states took a hit during the downturn, as companies went bankrupt, workers were laid off, and tax revenue collected from oil and gas dropped. In most of them, like North Dakota, where Preszler lives, wells produce both oil and gas. When prices plummeted, oil suddenly wasn't worth what it used to be, he says, but the gas still needed to be transported and treated, and that cost stayed constant.

"That's when people saw their checks being reduced significantly," he says. Some even received statements with a negative balance, meaning they wouldn't receive more royalties until the balance turned positive again.

In Pennsylvania, wells produce mainly gas, so landowners like Barrett noticed right away when companies took out big, unexplained cuts. Some Pennsylvania landowners have been complaining for years about exorbitant deductions. Still, many never have a reason to complain. Clark, for example, says he feels his deductions are reasonable.

A patchwork of court rulings, allegations of cheating

Over the years, some landowners sued when they felt they were being cheated. That has led to a patchwork of court rulings in many states, determining how leases are interpreted.

Some landowners hire a lawyer to negotiate a lease with explicit language that prohibits deductions or spells out exactly which costs can be taken out. The greater stake an individual has in a well, the more bargaining power he or she has to negotiate a lease that works in his or her favor, says University of Texas law professor Owen Anderson.

But not all go that route.

"As often happens, these landowners and mineral owners sign these leases the company offers without negotiating terms and without getting legal advice," Anderson says.

Later, if they believe they're not getting paid fairly, their options are slim. They can hire an expert to audit their royalties and go to court, but some can't afford to do that.

Preszler says the better option is to prevent landowners from signing bad leases.

"It's a lot easier to try to get the terms correctly done at the front end than to try to manage and fix a problem later," he says. His group is developing a seminar to better educate landowners.

In Pennsylvania, a decades-old law guarantees a minimum 12.5 percent royalty. But the state's Supreme Court has ruled that deductions can still be taken, even if they cut into that rate. For four years, mineral owners have pushed to keep that from happening, but so far the Legislature has not passed a bill.

It's a different story in West Virginia, where royalty owners just scored a victory. Lawmakers did step in after the state Supreme Court sided with energy companies in a case last year. Now, the governor has signed a new law prohibiting gas and oil companies from deducting post-production expenses in certain types of leases.

Meanwhile, lawsuits are playing out in several states, including one brought by Pennsylvania's attorney general accusing several gas companies of stiffing thousands of landowners by promising royalty money that was never paid. So far, he has not agreed to an offer by Chesapeake Energy to settle its royalty cases in the state for $30 million.

Back on his farm in Susquehanna County, Clark says even though he is pleased with his gas royalties, he thinks the law should ensure everyone is paid fairly.

"I guess I really don't understand why the government hasn't stepped in and done a little bit more, because it would benefit them too," he says. "Any extra money we'd get, we'd be taxed on."

Over in Bradford County, Barrett just wants to protect his family's legacy. "Every farmer would say they want their farm to continue," he says.

Barrett's land was passed down from his great-grandfather, and he hopes to hand it over to his grandchildren. But without the royalty money he expected, he and his wife may have to sell the farm to retire.