Accessibility links
A Gay Teen Romance, Sealed With A Peck: 'Love, Simon' Come for the rom-com elements, familiar and dutiful though they are. Stay for the film's sensitive, specific and closely observed coming-out storyline, which feels new — and important. 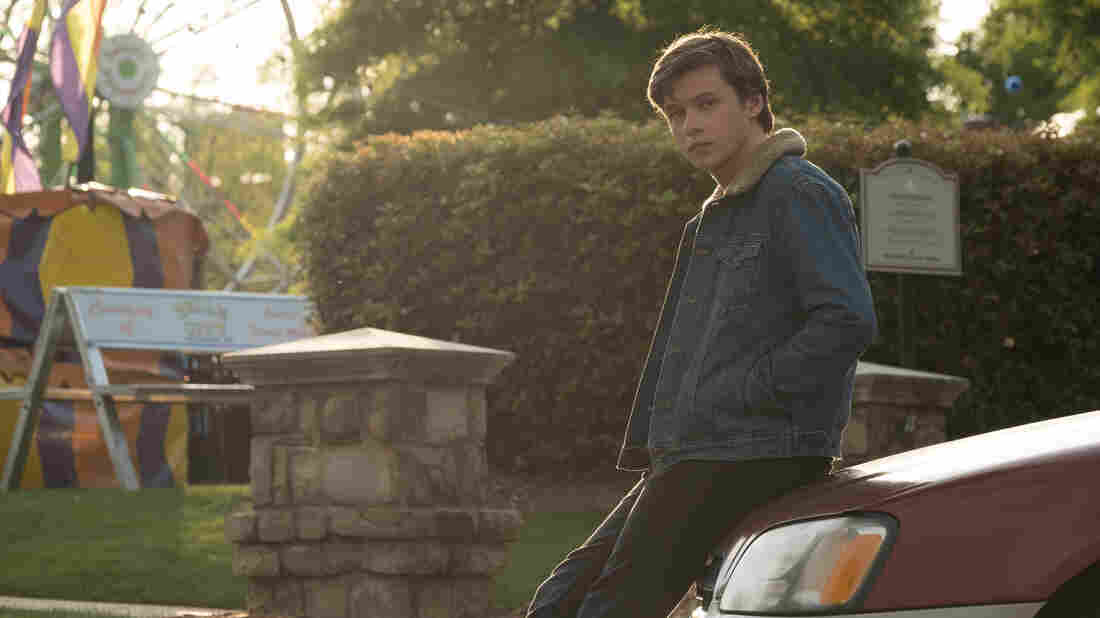 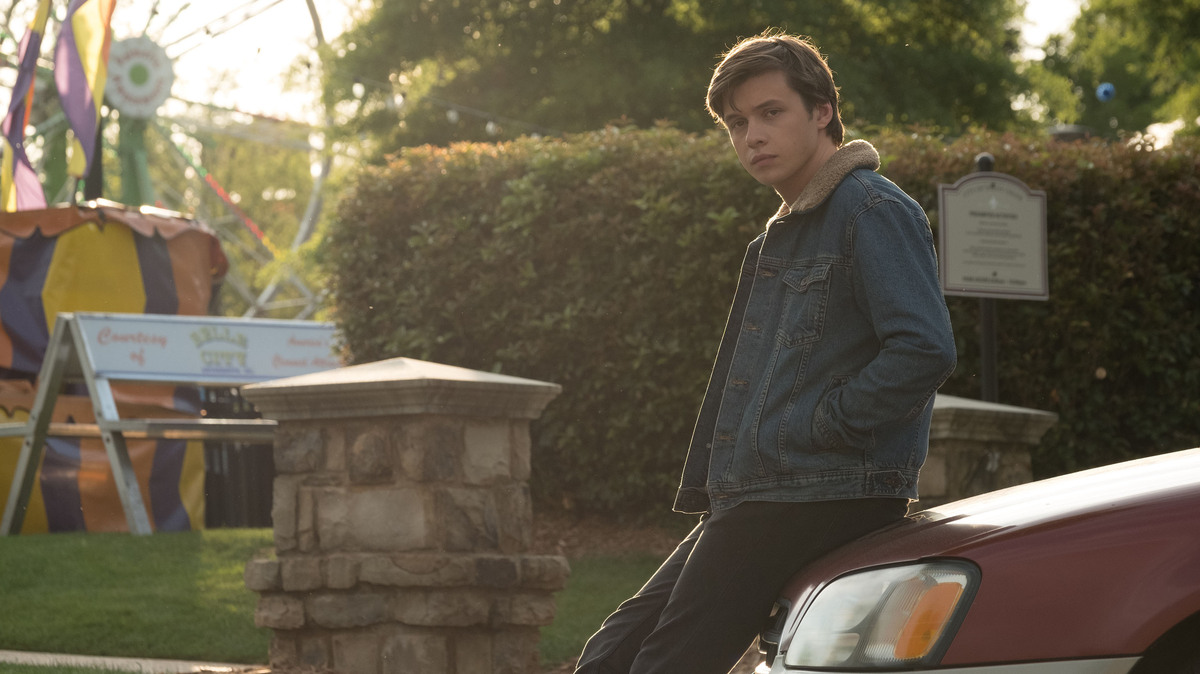 "I'm just like you," says gay 17-year-old Simon Spier (straight 22-year-old Nick Robinson), by way of introduction. We assume, at first, that he's just getting his Ferris Bueller on and introducing himself to the audience, but it turns out he's instead replying, via pseudonymous e-mail account, to an anonymous blog post written by one of his schoolmates. A correspondence ensues between their respective, most secret selves, as both Simon and the young man he calls "Blue" are still in the closet. Their sweet, sincere e-mail exchange, full of nervous confessions, mutual support and music playlists, makes up the epistolary backbone of Love, Simon, a mainstream gay high-school romance that's causing some people — both within and without the 20th Century Fox PR department — to call it "groundbreaking."

It is that, in a way, so long as we're careful to get specific about just which patch of cinematic ground is truly getting excavated, here. Certainly, high-school romances have been piling up for decades now. In recent years, we've amassed a much smaller but not inconsiderate amount of gay high-school movies, from the broad (1999's But I'm A Cheerleader), to the raunchy (2006's Another Gay Movie), to those that plant their feet in just-be-true-to-yourself uplift (2006's The Curiosity of Chance; this year's Freak Show).

It's also worth noting that there have been more than a few swoony gay high-school romances — though admittedly these tend to get imported from places like Great Britain (1996's Beautiful Thing) and Brazil (2016's The Way He Looks).

If Love, Simon is a mainstream gay high-school romance (and it is) then clearly the word that's doing the real groundbreaking work — the one that's truly operating the jackhammer — isn't romance, or high-school, or even gay; it's mainstream.

Those previous films focusing on the romantic/sexual travails and triumphs of queer kids were scrappy independent/international productions, and whatever public reception they got was fueled by film festival buzz, a handful of reviews and word of mouth. Love, Simon is a major studio release, backed by the full might and majesty of 20th Century Fox's marketing and promotional departments. It has been ruthlessly engineered, its every rough edge rock-tumbled to a polished, smooth perfection, so as to better sail over the nation's art-houses and land squarely in the American multiplex.

Teams of professionals have ergonomically designed it for mass consumption. Everything about it is charming and palatable, cute and inoffensive. It is a gay coming-out story set squarely in a world of upscale suburban homes, where parents who buy their kids Subarus — complete with the giant hood-ribbon you only see in car commercials — can be counted upon to be tearfully understanding, when the time comes. It's a world where bullying happens, when it happens, in a strangely feckless manner that gets swiftly and permanently dealt with by concerned, acutely observant teachers.

In other words, it's pure fantasy.

Consider: In Love, Simon, our hero and his friends mouth dialogue that vacillates between Buffy-clever and Disney Channel-twee. [Check!] A blackmail scheme drives the plot [Check!], forcing Simon to ally himself with a character we're meant to find both repellent and endearing (which: yep to the former, nope to the latter). [Check!] There is a my-parents-are-away house party. [Check!] Over the course of the film, love triangles and least one love rhombus bloom [Check! Check!], none of which seem particularly convincing. [Check!] The climactic kiss is neither sensual nor erotic — it's a peck, a place-holder, just another rom-com box to be dutifully [Check!]ed.

If that's the task the film sets for itself, why begrudge its efficiency at achieving it? Yes, Love, Simon does everything it can do to parboil the flavor, color, consistency and fabulousness out of its queer romance, until all that's left is the familiar beige, featureless pap of overcooked heterosexual teen rom-coms. But that's ... kind of the point. Why shouldn't queer kids get the chance to see generic, mass-produced versions of themselves onscreen, overcoming minor obstacles on their path to True Love(tm)?

They absolutely should, and with Love, Simon (and the films that will certainly follow it) they will.

But while they're watching it, they — and the friends and family members they bring along with them — will get to see something else. Something about which the film, gratifyingly, is much more specific, and thoughtful and acutely detailed. Because while the romance elements of Love, Simon will earn it headlines and, perhaps more importantly, butts-in-seats, it's the film's quieter, deeper coming-out storyline that forms its true emotional center.

It's here where the unquestioned privilege of the film's main character becomes a feature, not a bug. He doesn't remain in the closet out of fear of being rejected by family and friends, or because it would place him at physical, social or financial risk. No, he resists confessing his sexuality because to do so would mean his perfect suburban life would change. That's a small, smart, sharply observed detail. Screenwriters Elizabeth Berger and Isaac Aptaker (and Becky Albertalli, who wrote the 2015 YA novel on which the film is based) have clearly done their homework; they know that the closet is not just a lonely and secretive place, but in cases like Simon's, it's a toxically selfish one too.

When he does decide to crack the closet door, those scenes play out with an unforced immediacy and realness; the vaguely diffident quality Robinson brings to Simon charges those looooong silences, enriches them. Anyone who's been on either side of that particular conversation will likely find themselves involuntarily holding their breath.

Love, Simon can do some good in the world, and it likely will — but perhaps not the precise kind of good it thinks it will. The audience at my pre-release screening dependably oohed and aahed as the film churned through its various romantic feints and reveals. But the moment that a character finally spoke the words "I'm gay," they did more than murmur.