Accessibility links
Dozens Of Westerners Join Kurds To Fight ISIS In Syria While hundreds of Americans have tried to join ISIS, the Kurdish People's Protection Units, also known as YPG, have recruited people around the world to fight against the extremist group in Syria.

Dozens Of Westerners Join Kurds To Fight ISIS In Syria

Dozens Of Westerners Join Kurds To Fight ISIS In Syria 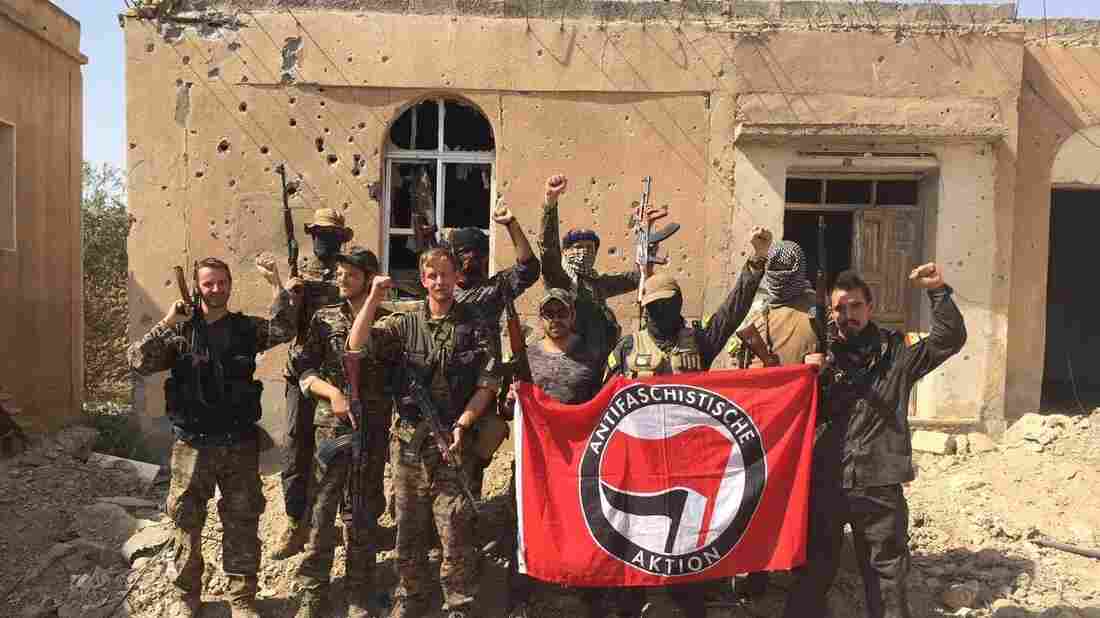 Caleb Stevens (fourth from left) in Raqqa, Syria, with other members of his unit. Stevens, a 23-year-old from Michigan, traveled to Syria to fight with the Kurdish People's Protection Units or YPG. Courtesy of Caleb Stevens hide caption 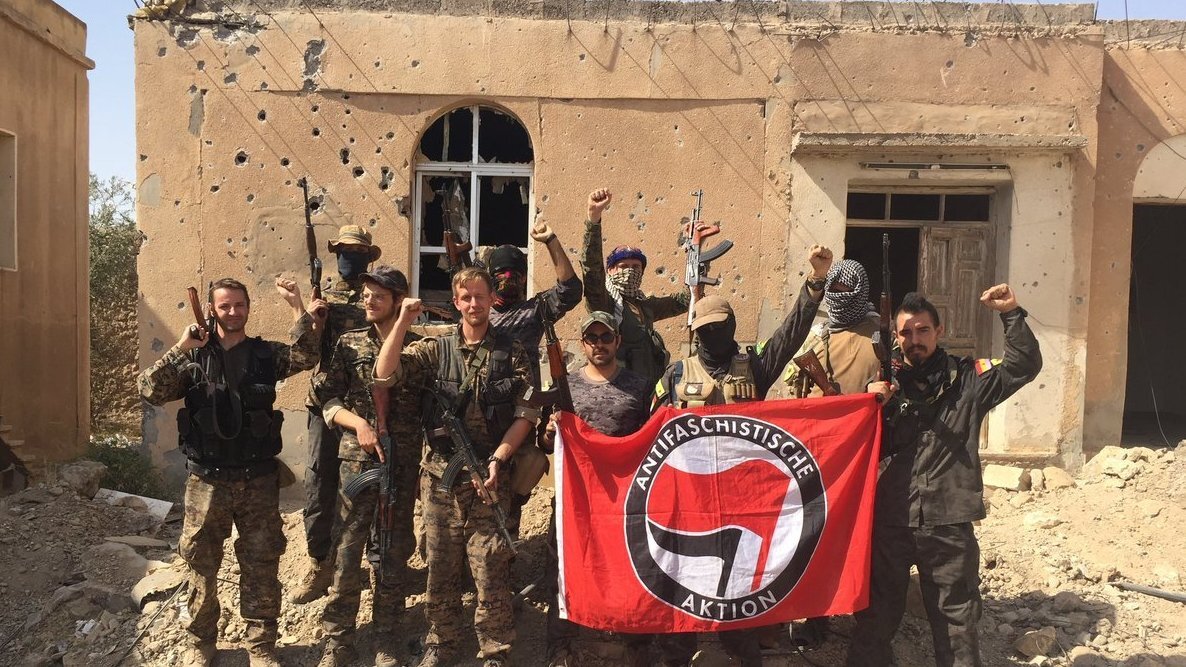 Caleb Stevens (fourth from left) in Raqqa, Syria, with other members of his unit. Stevens, a 23-year-old from Michigan, traveled to Syria to fight with the Kurdish People's Protection Units or YPG.

A 23-year-old American staggered into a Chicago emergency room in January with a gunshot wound he says he sustained in Syria.

Caleb Stevens had been fighting ISIS alongside Kurdish militants, the Chicago Tribune confirmed. While hundreds of Americans have tried to join ISIS in Syria, others have also ventured to the Middle East to fight against the extremist group.

While attending the United States Military Academy, Stevens was inspired to join the fight because he says he was "watching the world fall apart for people in Syria."

"Seeing kind of what ISIS was doing, and seeing what the YPG was trying to do, I had the sense that, 'Hey, here's a cause that's worth fighting for,' " Stevens told Here & Now's Robin Young earlier this week.

Stevens says he connected with the Kurdish People's Protection Units, also known by the Kurdish initials YPG, on Facebook. The group has a strong online presence where it uses social media to recruit Westerners, and then eventually transfers communication to encrypted messaging apps. Once accepted, foreign fighters, like Stevens, are often smuggled into Syria through Iraq.

Among the dozens of people from across the world who have gone to fight with Kurdish forces, many of them are young idealists who often romanticize the cause of fighting against ISIS, or more broadly, the idea of taking up arms in the name of human rights, says Patrick M. O'Connell, one of the Tribune reporters who wrote about Stevens.

"This area of the world has been a haven or a magnet for people like Stevens who are willing to put their feelings into actions," he told Young.

Stevens definitely wasn't alone. He says he was in a unit made up of other Westerners who all embodied a similar idealistic resolve.

"Sometimes our days were training, studying Kurdish, talking. There were a lot of militant anarchists," Stevens says. "There were some people who were there specifically because of their feminist beliefs. So, yeah, sort of people coming from all angles."

The State Department was reluctant to provide information about the number of Americans who have traveled to Syria to fight with the Kurds, telling the Tribune that "a small number" of Americans have died after going there to participate in the fighting.

"U.S. citizens who undertake such activity face extreme personal risks, including kidnapping, injury, or death," the State Department said. "The U.S. government does not support this activity."

O'Connell adds that unlike those who try to join ISIS, Americans who fight with the U.S.-backed Kurdish forces are unlikely to face any legal trouble upon returning home.

For A British Man, Fighting ISIS Was Simply The Right Thing To Do

The Syrian Defense Forces, which includes YPG fighters, told The New York Times in January there were about 150 foreign fighters working with them in Syria.

"We have Americans, British, Japanese, Algerians — even Chinese," said Brusk Hasaka, a spokesman for the group. "It's not obligatory for them, but they feel they have a duty toward us. There is something called justice and injustice."

Despite the general depiction of these men and women as heroes, critics say these volunteers represent yet another group of international actors that are creating more problems for local residents.

"They are not fighting imperialism or supporting Kurdish autonomy, and they are not performing an act of charity," Malak Chabkoun writes in Al Jazeera. "Aside from putting themselves and others in danger, they are only complicating affairs for Syrians and Iraqis who are already at the mercy of countless international powers and non-state actors."

The situation is also problematic because Turkey, which is a NATO ally of the U.S., considers the YPG a terrorist organization. Some international volunteers have even vowed to support the Kurds as Turkey continues its offensive to push them out of parts of northern Syria, the Times reported. In other words, O'Connell says, this conflict goes far beyond ISIS.

"There's a lot of different factions and a lot of different moving pieces," he says. "And as we know from history is that these pieces can often move around to the point where in the future it may look very different for somebody like Stevens who [is] going over to fight for YPG or whoever down the road if the political dominoes fall in different ways."