Accessibility links
50 Years On, My Lai Massacre Remains A Gaping Wound American soldiers in Vietnam killed more than 500 civilians in a period of four hours on March 16, 1968, in the village of My Lai. The atrocity continues to challenge America's image of itself. 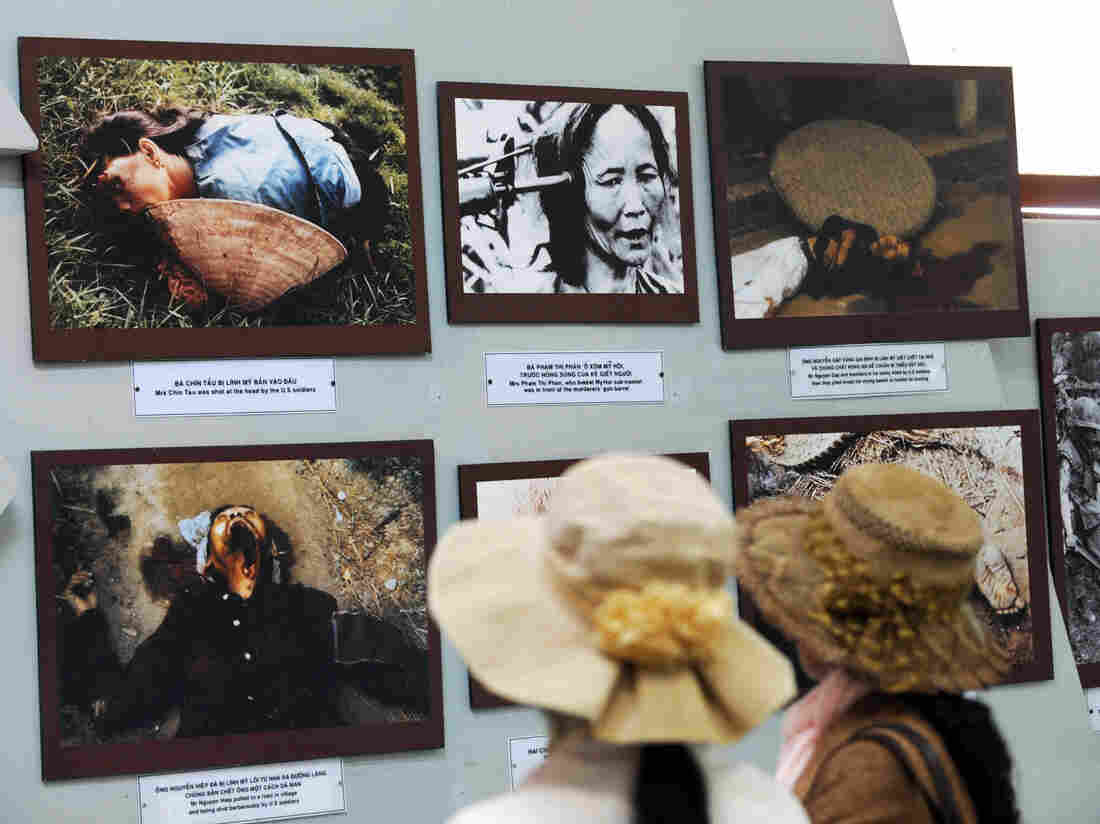 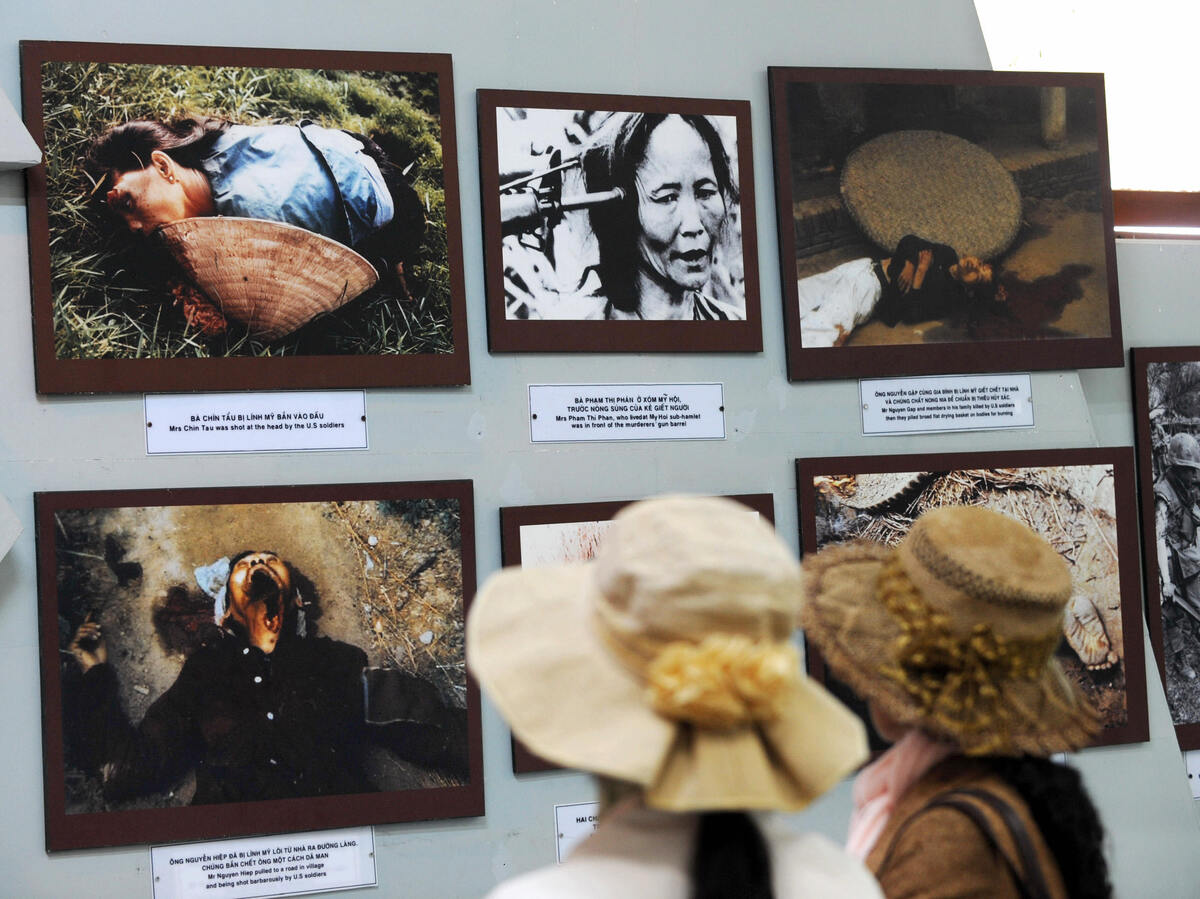 Two young women look at photographs showing massacre scenes as they tour the My Lai Massacre Museum at My Lai village in the central province of Quang Ngai.

On March 16, 1968, chopper pilot Hugh Thompson was uncertain what was going on in the village below. American troops were shooting, but he couldn't see anyone returning fire.

He landed his bird when he saw a group of women and children pinned down in a ditch.

"So we then set down. Two guys I think it was came over to the aircraft," Thompson told NPR in a 2004 interview.

" 'You know, well, there's some civilians over in that ditch. You know, can you help 'em out?'

"And they said, 'Well, we can help them out of their misery.'

" 'Oh, man, come on. Quit joking around. How about helping them out?'

"And they walked away. And as we took off, we heard machine gun fire.

" 'My God, they're shooting into the ditch.' And then that's when there was no use fooling ourselves anymore about what was going on," Thompson said.

Thompson had interrupted what would later be known as the My Lai massacre, which remains one of the darkest chapters in the long history of the United States military. 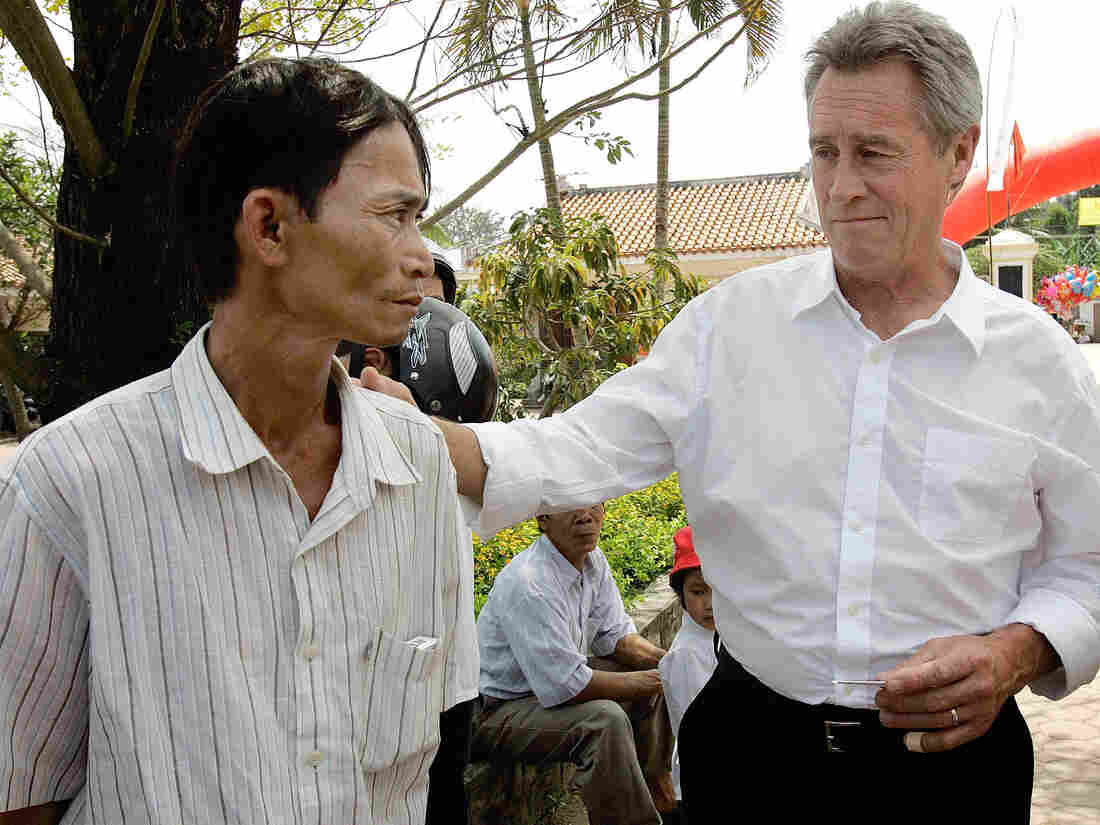 The night before, Army Capt. Ernest Medina told his soldiers that a string of hamlets, including My Lai, would be full of enemy troops and empty of civilians.

When they landed, it turned out to be the opposite.

Soldiers later admitted women were raped and mutilated. More than 200 children, many of them herded into a ditch, died in a spray of machine-gun fire. 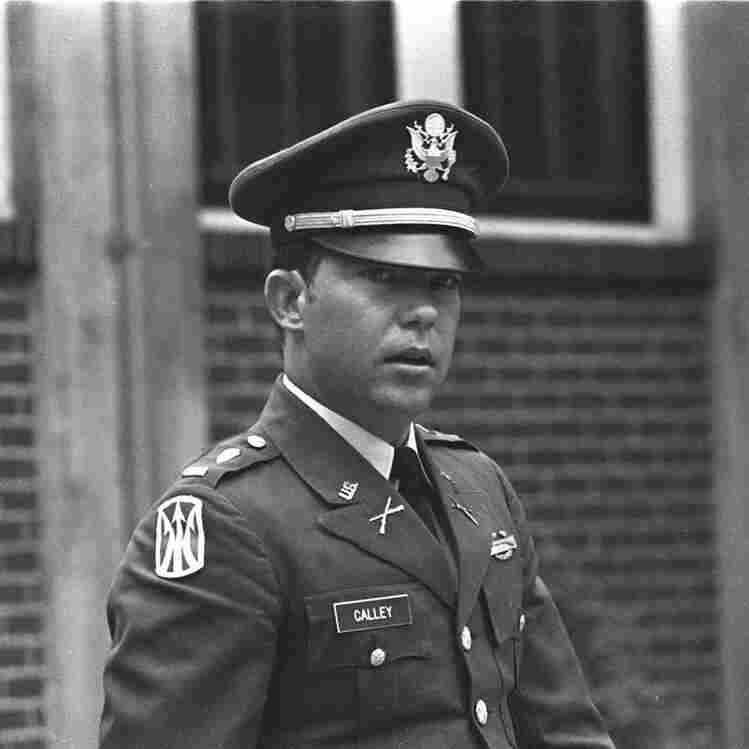 At first the Army tried to cover it up, but journalist Seymour Hersh broke the story in November of 1969. Now it's part of the curriculum at the military service academies.

He shows his students a picture he took with Hugh Thompson and his door-gunner Larry Colburn.

"If we can use the term heroes, if there were any heroes at My Lai, it was them," says Sisson.

Once Thompson, Colburn and their crew chief Glenn Andreotta realized what was happening, they landed their chopper in between the troops of Charlie Company and the civilians.

Thompson ordered his gunner to shoot any Americans who continued to murder civilians. Thompson flew several Vietnamese civilians out to safety, including a nine-year-old boy sitting in his crew chief's lap.

It took 30 years for the Army to recognize the three members of the chopper crew as heroes. In 1998 they were awarded the Soldier's Medal, which recognizes heroism not involving conflict with the enemy.

Fifty years ago, they got no such praise.

When Lt. William Calley went on trial, Hugh Thompson was shunned for testifying against him. Calley was the only person punished for the massacre - and public opinion back home supported him. There was even a song, that made the Top 40 in 1971.

That public support made it easy for President Richard Nixon to reduce Calley's sentence to house arrest. He served only three-and-a-half years. Calley is still alive and lives in Georgia.

That's also a lesson of My Lai - there was little accountability.

The shadow of My Lai

John Sifton of Human Rights Watch researched war crimes in Iraq and Afghanistan. He points to the Haditha massacre in Iraq in 2005. U.S. Marines killed 24 civilians, including women and children, after a bomb attack on their unit.

"In the end only one person was held accountable and it wasn't a very serious punishment," says Sifton.

There were eight courts martial, but only one conviction, which ended in a plea deal with no prison time. Sifton says the military justice system usually gives senior officers a pass. And without real punishments, he says, abuses will continue.

"Officers at the Bagram Air Base in Afghanistan - where there were also serious abuses including several deaths in custody - the officers involved in it got away with it. And later went to Iraq, where they committed abuses!" says Sifton.

Ike Wilson, a former Army colonel who served in Iraq and Afghanistan, says Haditha isn't comparable to My Lai, but soldiers still need to study it.

"I know through my whole 33 years of professional military service, both soldiering and as a professor at West Point, My Lai has been a centerpiece with regard to the ethics of war," says Wilson. 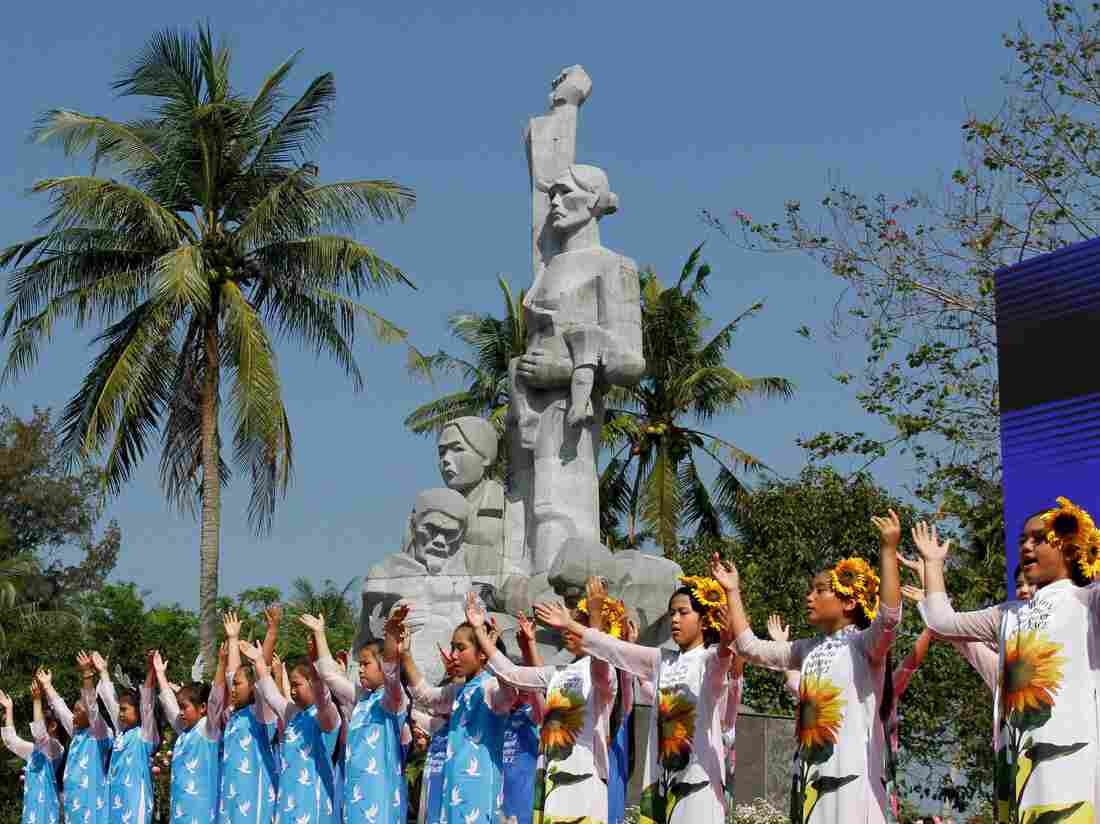 Children perform at a war memorial dedicated to the victims of the My Lai massacre in the village of Son My during a ceremony marking the 50th anniversary of the massacre on March 16, 2018. NHAC NGUYEN/AFP/Getty Images hide caption 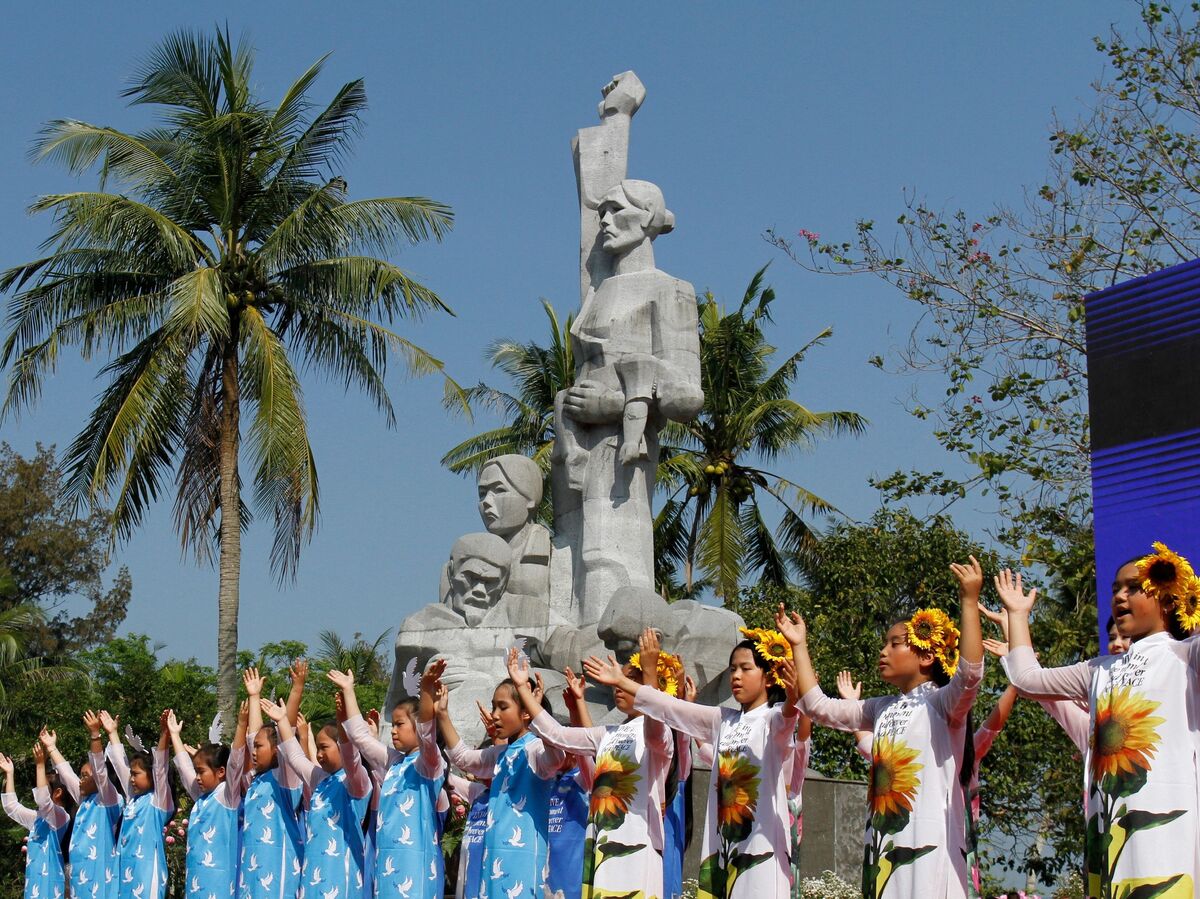 Children perform at a war memorial dedicated to the victims of the My Lai massacre in the village of Son My during a ceremony marking the 50th anniversary of the massacre on March 16, 2018.

Wilson says My Lai spurred changes like ending the draft; volunteer officers are much better trained and educated. But he says the modern high-tech military isn't immune to the risk.

"Ten thousand miles away in the comforts of an air-conditioned room, prosecuting warfare through armed drones? Might that be the new face of potential My Lais in the future?" asks Wilson

There's a museum in My Lai now, with a plaque listing all the names and ages of the 504 people killed that day. American tourists, including Vietnam vets, regularly visit.

And back at the Air Force Academy, Maj. Sisson is asking an ethics class about My Lai.

His class is young but not naïve. They recognize that the U.S. military could easily cross the line again.

"I think the difference is that America owned up," he says, "And that's why we're talking about it. We're not pushing it underneath a rug."

The audio version of this story included excerpts from the 1970 film, Interviews with My Lai Veterans, produced and directed by Joseph Strick. Audio courtesy of the Academy Film Archive. The film received the Oscar for documentary (short subject).