Accessibility links
Not My Job: We Quiz Quarterback Tom Brady On 'The Brady Bunch' Three questions about the classic TV sitcom for the five-time Super Bowl winner and New England Patriots passer. 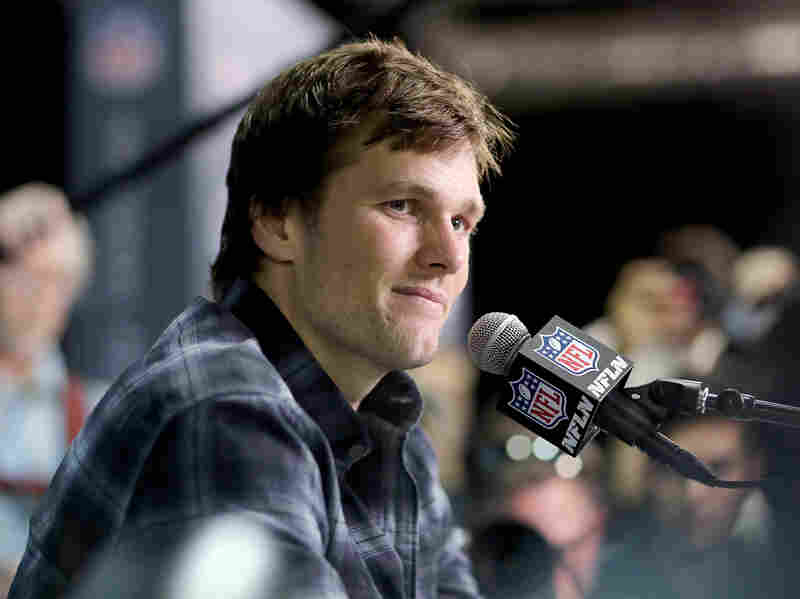 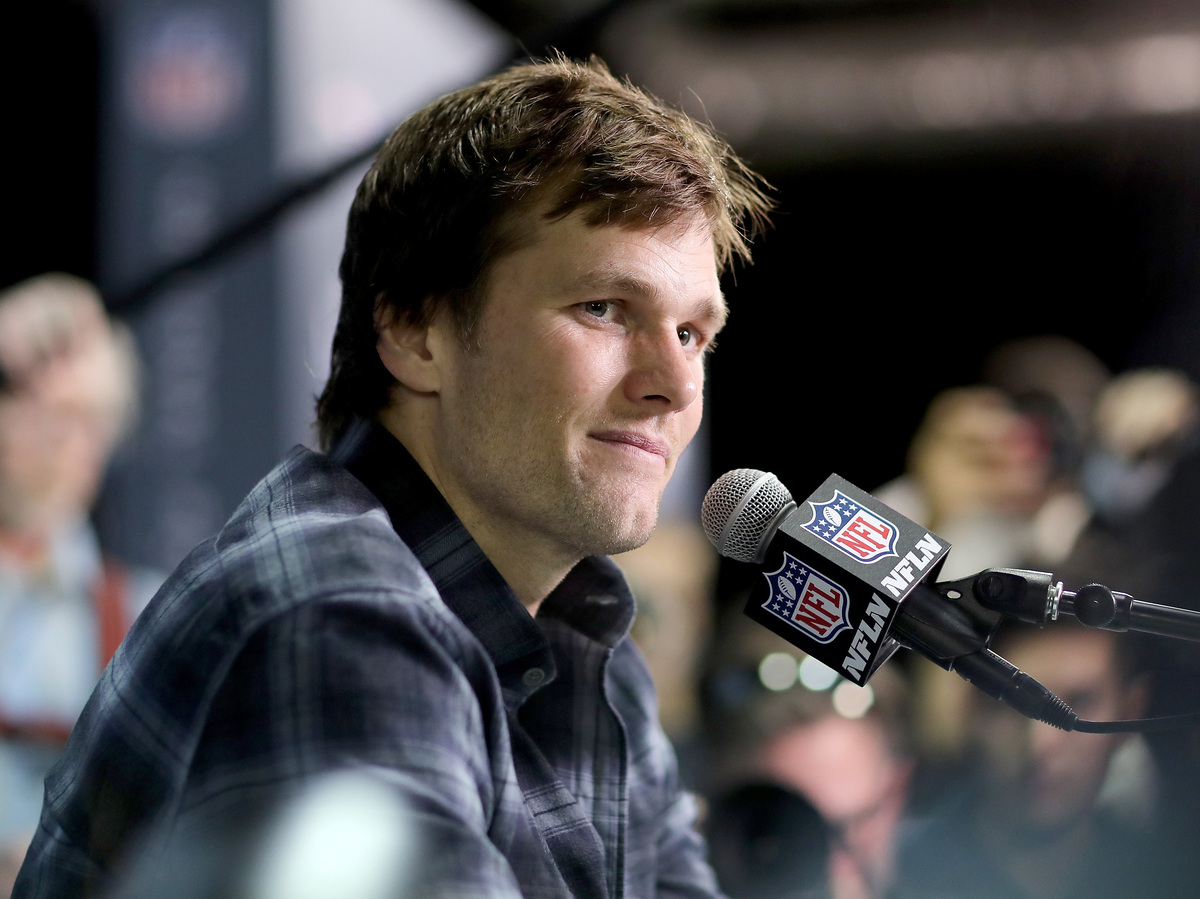 This week's guest was never a very gifted athlete growing up. He had a spotty college career where he shared the starting spot with another quarterback, and was selected 199th overall in the NFL Draft back in 2000. Then he won the Super Bowl five times with the New England Patriots.

He's now the most famous Brady alive — but only because the TV show The Brady Bunch is no longer on the air. We asked him three questions about the classic family sitcom.

And now the game where we ask famous people about obscure things - it's called Not My Job. Our guest on this week's show has an uplifting story. He was never a very gifted athlete growing up.

SAGAL: He had a spotted college career when he had to share the starting spot at his school with another quarterback, and he went 199th in the NFL Draft back in 2000. But despite all that, he's made something of himself.

TOM BRADY: Thank you for having me.

SAGAL: It's really a pleasure. I want to ask you first off - I can just say from this room that there are a lot of people here who are really happy to hear your voice. And there's a small but vocal contingent who are totally not.

SAGAL: I'm guessing as the dominant player in the dominant team over the last decade or more, you're used to that - to, like, people not liking you? Is that something you deal with?

BRADY: I think that's a badge of honor in our sport. When they don't like you, you're probably doing something pretty good.

MO ROCCA: But this is a special situation.

ROCCA: Because we're in Connecticut, right? Right - we're right between New York and Boston. I mean, this is basically the DMZ.

SAGAL: I want to talk to you, obviously, about your book - "The TB12 Method." You are now a New York Times best-selling author, which is exciting.

SAGAL: Does that make you want to give up sports and go, like, into the literary world?

BRADY: ...In English. It was really cool to do. You know, I felt I had so many experiences I've learned from over the years as an athlete, and I wanted to be able to share those with the next generation of athletes. And people would always come up to me, and they'd go, Tom, what do you do? And I don't have, you know, 30 seconds to tell them. So now I could say, go buy the book. I wrote a book.

BODETT: I have a question. You know, like, I'm feeling inspired here, you know, right now. And so if - I'm 63 years old, not all that athletic. Would the TB12 method kill me? Or...

BODETT: ...Would I get some benefit from it?

ROCCA: Tom, I'm wondering - you - this is, like, a medical question. You seem to be getting younger. Whose...

ROCCA: ...Blood are you drinking?

SAGAL: I did want to - your book is noted and your routine is noted for a number of things - your discipline, obviously, but also your hydration. You drink all the time - just...

SAGAL: ...Mineral water. But also your diet - you have a very specific diet. In fact, you don't eat such terrible junk foods as tomatoes...

SAGAL: ...Because they're nightshade family, and that's not bad for you, according to Tom and his philosophy.

HELEN HONG: Don't sic the tomato people on him.

BRADY: That's right. Look. If you love tomatoes, eat tomatoes. It's - you know, everyone's got one life. They should live it and enjoy it.

ROCCA: Yeah. Die young. Eat all the tomatoes you want.

SAGAL: You're going around. You're talking about your book and the TB12 method. We saw that you ate a strawberry for what we were told was the first time in your life, or...

SAGAL: That's - first of all, how do you avoid strawberries growing up?

BRADY: Well, that was the problem. When I - see, I grew up in California. And I had an aunt that lived in Central California. And when she'd drive to see us, she would stop at the fruit stands on the side of the road, and she'd get these big trays of strawberries. And she'd bring them up to our house, and she would put them into our refrigerator. And every time the refrigerator door was opened, the smell of strawberries would permeate the room. And I could not stand it. And since then, I've never eaten a strawberry. The thought of a strawberry is just - is...

BRADY: ...Terrible for me. And the fact that I actually did it the other night - I couldn't believe it, either, so that's what made it most surprising for me.

SAGAL: Yeah. And how did it taste after how many years?

SAGAL: I think people all over America just said, holy moly - he can swear.

ROCCA: And so what was your reaction? I mean, was this like a trauma in the house, or...

BRADY: It just was sitting right there in my throat.

HONG: I love that the thing that is making you swear is this strawberry.

BRADY: I know. I'll tell you, this goes back - look. This is many years.

ROCCA: May I suggest Franken Berries?

SAGAL: There are defensive coordinators who are plotting right now to, like...

SAGAL: ...To douse their team uniforms with the scent of strawberries.

BRADY: That would be smart. But most defensive coordinators are not smart.

SAGAL: Wow. So this actually segues to something I wanted to talk to you about, which is you are known - in addition for your boyish good looks - for your intensity. You say in your book that you treated practices like games - meaning...

SAGAL: ...That when you scored a goal against your own team's practice squad, you would celebrate.

BRADY: Yeah. In football, we score touchdowns - in soccer, goals.

BRADY: But when you score touchdowns...

HONG: Cut us some slack.

SAGAL: Fine - fine, Tom. I don't know anything about football, but I can eat strawberries whenever I like.

BRADY: ...Get a feel for what it's like to be my teammate.

SAGAL: Yeah, there you are.

ROCCA: You know, I feel like Tom Brady should get a show on Bravo.

SAGAL: Well, Tom Brady, it is great to talk to you. We've invited you here to play a game we're calling...

BILL KURTIS: Here's the story of a man named Brady.

SAGAL: So you are the most famous Brady alive, we would wager, but that's only because the classic TV show "The Brady Bunch" is no longer on the air.

SAGAL: We're going to ask you three questions about the family sitcom that an entire generation watched because there was nothing else on TV.

SAGAL: It was a dark time. If you get two right, you'll win our prize for one of our listeners - the voice of any one of us on their voicemail. Bill, who is Tom Brady playing for?

SAGAL: All right, Tom. Well, Tom, here is your first question. Robert Reed, the actor, played patriarch Mike Brady on the show, but he wasn't the producer's first choice for the role. Who was? A, Gene Hackman, who the network rejected for not being famous enough; B, Paul Lynde, who they thought exuded the quiet masculinity they wanted for America's dad...

SAGAL: ...Or C, J. Fred Muggs, the chimpanzee who used to cohost The Today Show back in the '50s.

BRADY: Oh, my God. Well, whenever I didn't know an answer in my multiple choice in high school, I said C, so I'll guess...

SAGAL: You do understand that C is, in this case, an ape?

HONG: The crowd is rioting.

SAGAL: Except for the Giants fans. They're happy.

BRADY: Yeah, I want to change my answer. This is simple. B.

SAGAL: It was actually Gene Hackman.

SAGAL: Gene Hackman - this - the stony, tough-guy actor. But the network thought he wasn't famous enough. You have two more chances here. Many people don't remember this, but there was actually a sequel show in 1990 to the original "Brady Bunch." It was called "The Bradys," and it was about the high-jinks of the Bradys kids now that they were adults. Which of these was one of the real plotlines on that show? A, Peter reveals his passionate love for his stepsister Cindy...

SAGAL: ...B, Bobby's career as a racecar driver is ended by a crash which permanently paralyzes him or C, Marcia discovers that her late father was notorious Wisconsin Senator Joseph McCarthy?

SAGAL: The Patriots fans are yelling B.

SAGAL: Call the play, audience. What is it?

SAGAL: They say B.

SAGAL: Yes. It turns out Bobby grows up and wants to be a racecar driver. He's crashed. He crashes. He's put in a wheelchair, and he stays there for the run of the season - which, amazingly, was only a month.

SAGAL: So your last question, Tom - here we go. Florence Henderson, who played Carol Brady, had a surprising connection to New York City politics. What was it? A, Mayor Bloomberg once attributed his diplomatic skill to Mrs. Brady's parenting style on the show; B, she ran for Queens Borough President with the slogan, here's the story of a borough named Queens...

SAGAL: ..Or C, she caught a sexually transmitted disease from Mayor John Lindsay.

ROCCA: I think it's C because I think that she ended up writing, like, sort of a saucy memoir.

BRADY: In that case, without even thinking, I'll just say C.

SAGAL: You got it.

HONG: I cannot believe that.

ROCCA: And let me just say, Tom, if you'd picked up the phone during the fourth quarter when I was calling...

SAGAL: Mo was exactly right. We know about this because she wrote a saucy memoir a few years before she died in which she told that story. And she said that John Lindsay felt very bad and sent her some flowers to apologize. Bill, how did Tom Brady do on our quiz?

KURTIS: Well, Tom Brady and his team got two out of three.

KURTIS: And we call that a win, Tom.

SAGAL: His New York Times best-seller "The TB12 Method" is out now. Get it. Learn a lot from the master. Tom Brady, thank you so much for joining us on WAIT WAIT... DON'T TELL ME. Thank you, Tom. Take care.

SAGAL: In just a minute, Bill plans a romantic family reunion in our Listener Limerick Challenge. Call 1-888-WAIT-WAIT to join us on the air. We'll be back in a minute with more of WAIT WAIT... DON'T TELL ME from NPR.