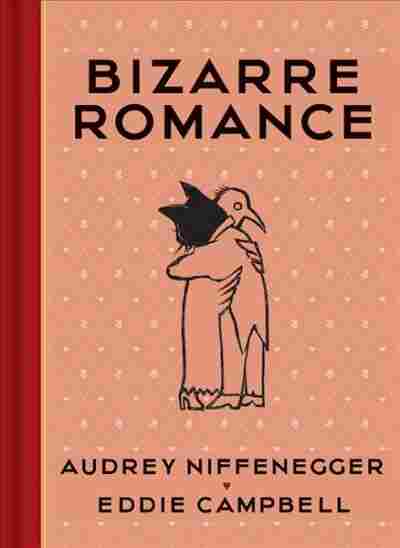 by Audrey Niffenegger and Eddie Campbell

There's a quote from The Time Traveler's Wife, Audrey Niffenegger's 2003 bestseller, that turns up a lot in DIY inspirational art — the kind you see on Pinterest, with a picture of a beach or mountain vista overlaid with Photoshopped text. It reads: "It's better to be extremely happy for a short while, even if you lose it, than to be just okay for your whole life." This is a so-so line as far as inspirational quotes go, but it's a remarkably efficient distillation of its author's ethos. The Time Traveler's Wife may have been the purest statement of that ethos, but Bizarre Romance, Niffenegger's collaboration with comics artist Eddie Campbell, reflects it too. Niffenegger is the most uncompromising kind of romantic: one who sticks by the belief that true joy is necessarily fleeting.

The best stories in Bizarre Romance are about the weirdness, sadness and banality that surround perfect moments and throw them into relief. A drunken artist knows happiness only at the split second of his death. A girl goes through a mirror into a magical realm, but its pleasures are nothing to the instant when she reunites with her brother. A man bedeviled by overbearing fairies has something like a happy ending in the middle of the story, when he "glimpse[s], just for a moment ... an entire life that might or might not be his: a girl with blond hair ... in a sunlit kitchen, stirring something in a pot on the stove." Later, he's turned into a hamster.

Niffenegger is the most uncompromising kind of romantic: one who sticks by the belief that true joy is necessarily fleeting.

Niffenegger bases one of the most memorable stories, "Motion Studies: Getting Out of Bed," on Eadweard Muybridge, the photographer who dissected (or is that eviscerated?) time. She's drawn to Muybridge even as she disapproves of him. Her protagonist, one of his models, observes, "the cameras want her to move, want to capture her and multiply her. The cameras are insects, clicking and rubbing their parts together ... today she is being split into slivers of time." How dare Muybridge take the most potent force of all into his own hands? Niffenegger sees his project as an arrogant, even a horrible one.

A trained artist, Niffenegger has created such illustrated works as 2005's The Three Incestuous Sisters. Its pictures were characterized by delicacy and precision to the point of bloodlessness — a whole collection of perfect, though frozen, moments. Niffenegger's standalone artworks are similarly poised. So this collaboration with Campbell, her husband, strikes a wrong note. They worked on it while "pursuing our own romance from distant corners of the globe," Niffenegger explains in the introduction. Campbell, who made his mark with From Hell (with Alan Moore) and the autobiographical Alec stories, is a very different kind of artist from his wife. He's known for his rough, unstudied line. "It has been a whole new crazy different wild thing to give the stories over to Eddie," Niffenegger muses. "The result has been a book that neither of us would have made alone — a book that is ours."

'Time Traveler's Wife': The Once And Future Fling

Niffenegger would have done better to keep it for herself. Her writing calls emphatically for a certain type of visual accompaniment: detailed, decorative, Edwardian. Campbell's pen (usually a digital stylus, as is all too evident) races forward and meanders, stutters and scrawls. In other works his approach has had a seat-of-your-pants energy, but here his sketches just feel rushed. A few exceptions — some medieval angels, a spindly skeleton, evocative lettering — just make everything else seem all the more ad hoc.

Niffenegger seems to have some sense of the book's failings. "Love and art are often unlovely, but when they are real, that doesn't matter so much," she claims. The sentiment rings false from a writer who's testified so fervently that the essence of romance is effervescent sublimity. That quality is missing from this book. Unfortunately, even in marriage, some things shouldn't be shared.