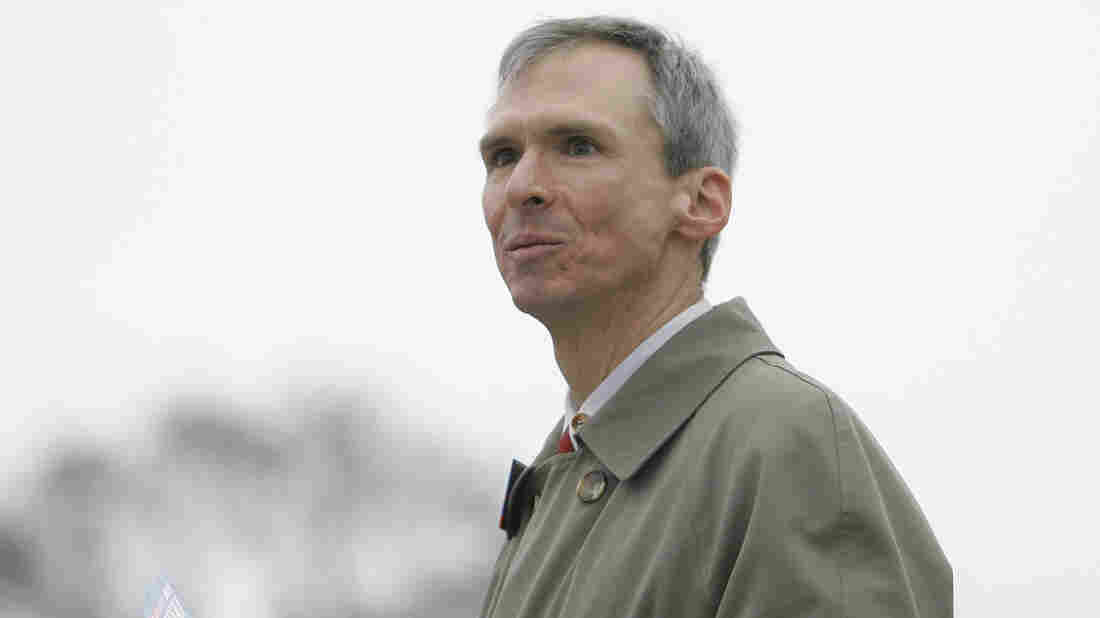 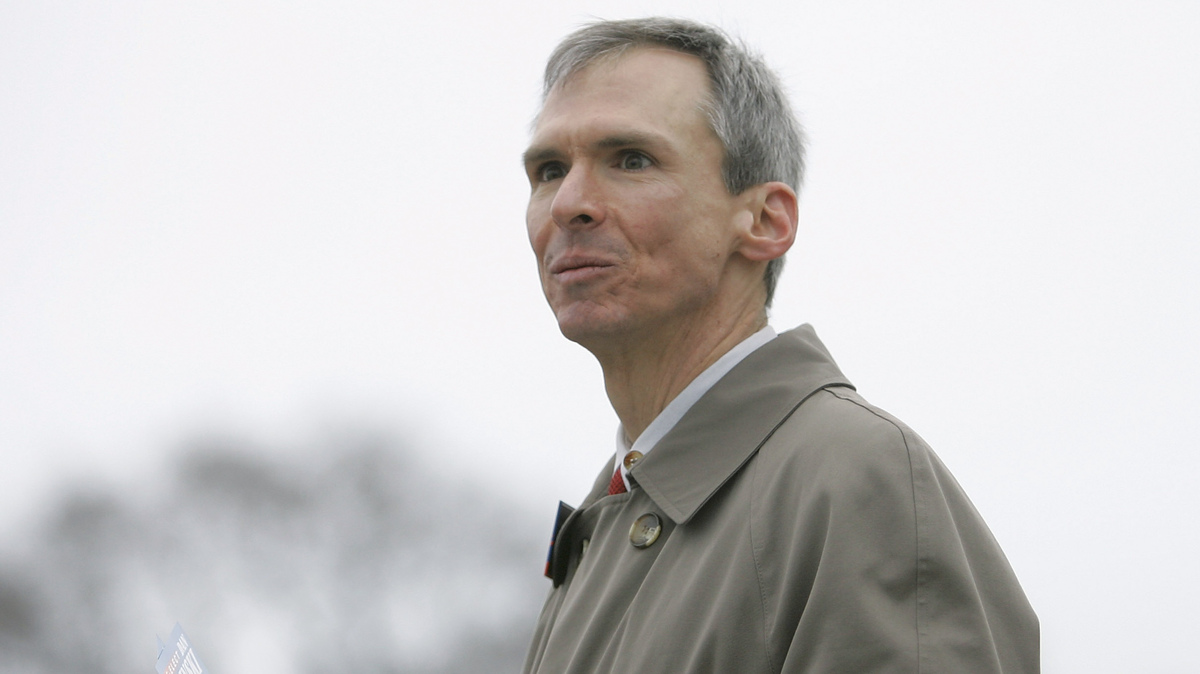 Rep. Dan Lipinski, D-Ill., campaigns for re-election in Illinois' 3rd Congressional District at a commuter train station back in 2008.

Incumbents on both sides of the aisle prevailed in their contested races, as Tuesday's Illinois primaries set the stage for competitive House and gubernatorial races this fall that could be key to Democratic comeback efforts in 2018.

Republican Gov. Bruce Rauner only narrowly eked out a primary victory over a conservative challenger. Still, Rauner is probably the most endangered GOP gubernatorial incumbent in the country. This fall he'll face billionaire venture capitalist J.B. Pritzker, who easily won the Democratic nomination for governor.

And in several targeted House races, national Democrats look like they will land their preferred candidates, with EMILY's List having a mixed night in races. As Democrats eye the 23 seats they need to take back the House, there are several districts in Illinois that could be essential paths to that goal, and Democrats got good news in some of those districts Tuesday night.

Overall, the primaries also further showcased an enthusiasm gap between Democratic and Republican voters. Not only were more Democratic candidates on the ballot than Republicans, and Democratic hopefuls raked in more in small-dollar donations, but Democratic primary turnout also swamped the GOP vote. Though, there was a competitive gubernatorial race on the Democratic side as well.

Here's a rundown of key takeaways from Illinois on Tuesday:

Could Illinois be the Democrats' path to the majority?

There are four GOP House seats in Illinois that could be in play come November. Democrats have seen a surge in fundraising and in candidates running across the state so far — just some of the potential signs that could portend a blue wave. National Democrats avoided electoral disasters in all their targeted races as well.

Roskam's suburban Chicago district is one of 23 Republican districts that voted for Hillary Clinton in 2016 — and this could be his toughest race since winning the seat in 2006. Scientist and clean energy advocate Sean Casten edged past financial adviser Kelly Mazeski, who was endorsed by EMILY's List, to claim the Democratic nomination.

The next best target for Democrats is Bost's southwest district along the Missouri border. St. Clair County State's Attorney Brendan Kelly, who Democrats had wooed to jump in for several cycles, easily won the nomination Tuesday night.

Trump won downstate areas like Bost's district and Rep. Rodney Davis' central Illinois district by appealing to white, working-class voters there, but Democrats believe these areas have soured on the president and they could have a shot at these seats. Davis' 13th Congressional District is rated "likely" Republican by Cook, and he'll face Illinois senior Sen. Dick Durbin's former fundraiser Betsy Dirksen Londrigan in the fall. Londrigan got about 45 percent of the vote in the five-way Democratic primary.

The 14th Congressional District, represented by GOP Rep. Randy Hultgren, which is rated likely Republican by Cook, could become a contest as well, though it's still a reach. Former Health and Human Services official Lauren Underwood defeated engineer Matt Brolley for the Democratic nomination.

Looking ahead to what could come in the Fall, Democrats are putting the GOP on the defensive by running more candidates, including in safe GOP territory. They are also getting the lion's share of small-dollar donations to House candidates this year, a sign of voter enthusiasm.

Seven-term Rep. Dan Lipinski has never been a typical Democrat — he opposed the Affordable Care Act, has voted with President Trump on some immigration measures and is anti-abortion rights. Until now, the former political science professor breezed through to re-election in this southwest Chicago district he essentially inherited after his father, Bill Lipinski, retired from Congress in 2004.

Lipinski managed to narrowly survive a tough scare from progressive activist Marie Newman, likely helped across the finish line by his family name, union support and help from some typically conservative groups. 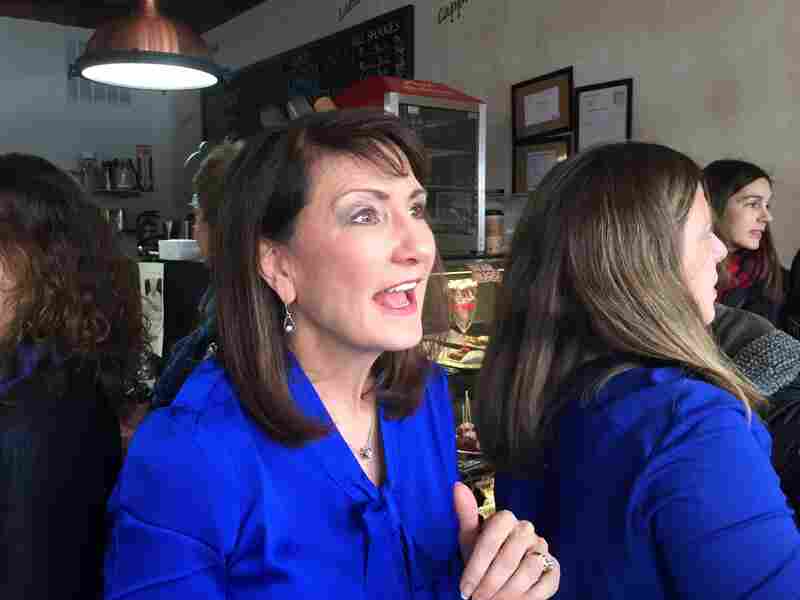 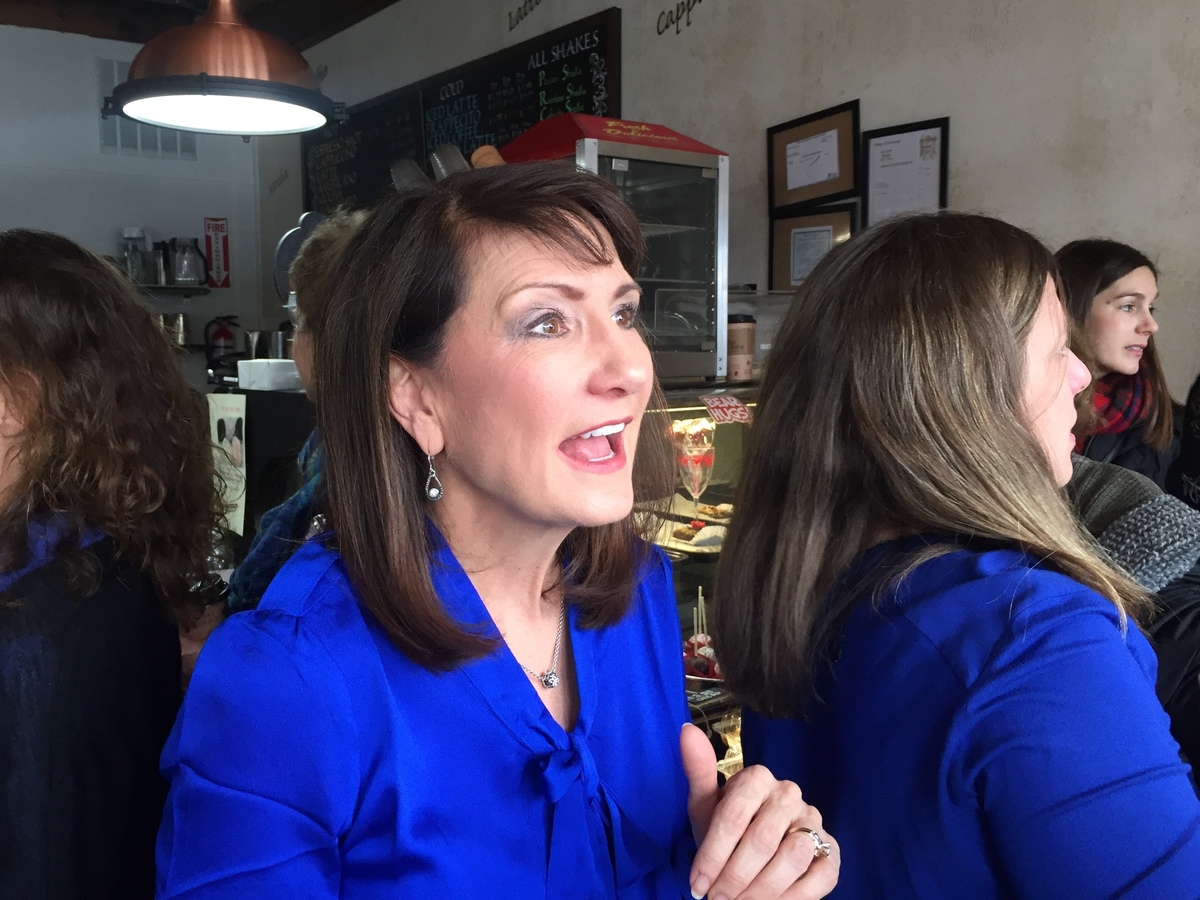 Lipinski, a member of the centrist Blue Dog Coalition, declined to endorse former President Obama in his 2012 re-election campaign, and former top Obama aides such as David Axelrod also weighed in for Newman. But Lipinski still had the backing of some top labor groups, and Democratic House leaders, including House Leader Nancy Pelosi and Democratic Whip Steny Hoyer, all stood behind the incumbent.

Meanwhile, some conservative and middle-of-the-road groups helped Lipinski. The anti-abortion rights group Susan B. Anthony List, which usually supports Republicans, sent in canvassers, while the bipartisan group No Labels funded a superPAC to help him.

This will be a safe Democratic seat in November. Republicans have their own headache on the ballot — the only GOP candidate who filed to run is a white supremacist and former leader of the American Nazi Party. 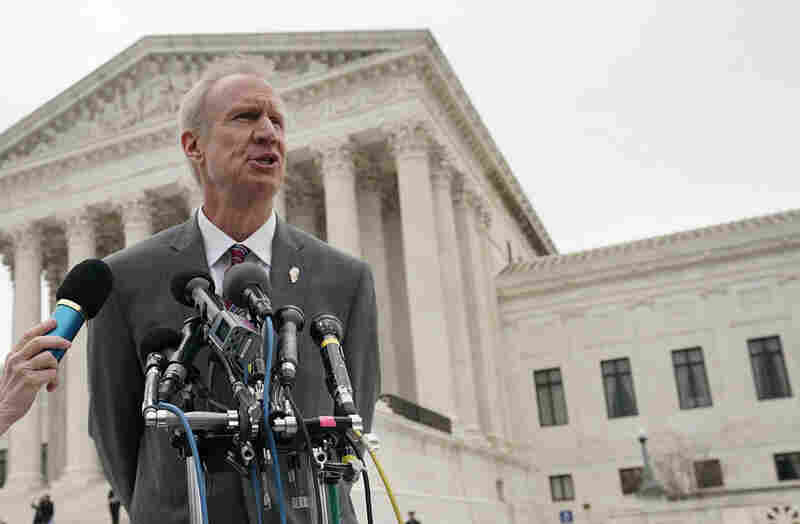 Gov. Bruce Rauner, R-Ill., speaks to members of the media in front of the U.S. Supreme Court after a hearing earlier this year. Alex Wong/Getty Images hide caption

Gov. Bruce Rauner will arguably be the most endangered GOP governor this fall, and his slim primary win underscored that he has major problems within the Republican base.

Rauner faced a stiff challenge from state Rep. Jeanne Ives, a staunch conservative who received favorable coverage from Breitbart News. With nearly all the votes counted, the AP declared Rauner the winner, though he defeated Ives by just over three points.

Ives hit the incumbent as being too liberal, particularly on abortion after he signed a bill last fall to expand abortion coverage for women on Medicaid.

Rauner, the wealthy former venture capitalist, spent over $50 million of his own money already. He had been figured to win comfortably, but there are reports of concern among Republicans in Illinois that the race could end up closer than expected.

As Politico noted, he's tried to woo different factions, first in the primary and then looking ahead to the general, which has caused him some headaches. The governor vetoed a gun store licensing bill. That could help him win over conservatives, but will surely come back to haunt him in November's election. The Democratic Governors Association, seeing Ives as the weaker candidate, also tried to meddle in the primary, running ads calling the challenger "too conservative" but then listing off her anti-abortion and pro-gun credentials in hopes of motivating her supporters to go to the polls.

Polling has shown Rauner's approval ratings are even lower than President Trump's in the state, and last year the conservative National Review called him the "worst Republican governor in America." He also came under fire for how he handled a Legionnaires' disease outbreak at veterans facility in the state that killed 13 people.

Billionaire J.B. Pritzker spent over $70 million of his own money to secure the Democratic nomination, which was a new primary record — and the pricey gambit paid off. With about 36 percent of precincts reporting, the Associated Press called the race for Pritzker, who led with 44 percent of the vote.

Businessman Chris Kennedy, son of the late Robert F. Kennedy, was getting 27 percent, while state Sen. Daniel Biss, who tried to claim the progressive mantle in the race, was netting 25 percent.

Pritzker's family founded the Hyatt hotel chain and he's the brother of former Obama Secretary of Commerce Penny Pritzker. Top Democrats rallied around his campaign, with both Illinois Sens. Tammy Duckworth and Dick Durbin endorsing him, along with major labor groups.

But Pritzker has come under fire over his family's use of offshore accounts to reportedly avoid taxes, and he's only released the first two pages of his personal returns. Pritzker also had to apologize after wiretaps of a 2008 conversation he had with disgraced former Gov. Rod Blagojevich revealed he made disparaging remarks about African-American politicians as they weighed who to appoint to finish the Senate term of Obama once he was elected president.

Those are just some of the issues his rivals seized upon in the primary, which are sure to become general election topics as well. In fact, Rauner has already run ads against Pritzker hitting him over his comments to Blagojevich. 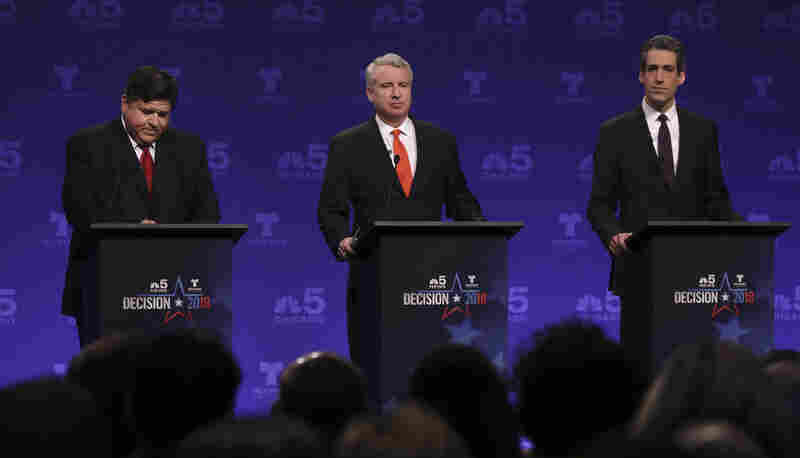 Cook County Commissioner Jesus "Chuy" Garcia easily bested his two Democratic rivals in the primary and is on track to succeed retiring Rep. Luis Gutierrez in this majority Latino district.

The AP called the race for Garcia, who was taking over two-thirds of the vote. Nonprofit executive Sol Flores, who was backed by EMILY's List, was a distant second, with Chicago police officer Richard Gonzalez in third.

Garcia was endorsed by Gutierrez and also benefited from plenty of name identification after unsuccessfully challenging Chicago Mayor Rahm Emanuel in 2015. He was eyeing another bid next year, but after Gutierrez made his announcement, Garcia shifted his focus to Congress instead. He claimed the progressive mantle in the race, and Vermont Sen. Bernie Sanders held a rally last month on his behalf.

Garcia will be the favorite in this solidly Democratic district this fall.