Accessibility links
Survivors Of Mass Shootings Face Renewed Trauma From Conspiracy Theorists The idea that victims of mass shootings are hired actors who stage tragedies in order to achieve political gain has drifted from obscure right-wing media into the mainstream. 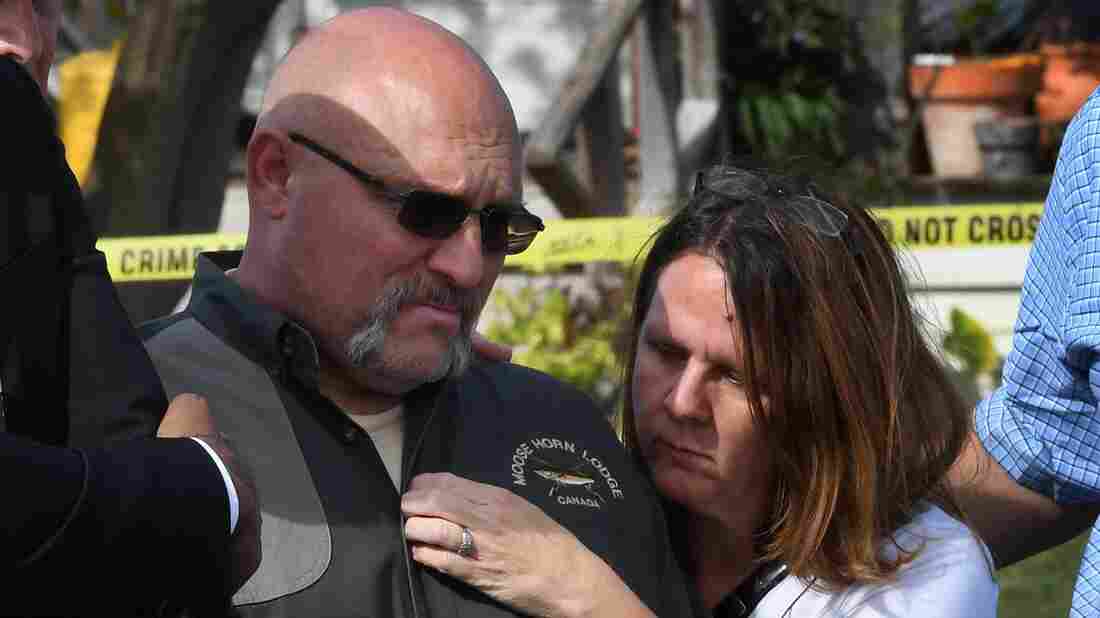 Pastor Frank Pomeroy and his wife Sherri speak during a press conference at the entrance to the First Baptist Church, after a mass shooting that killed 26 people in Sutherland Springs, Texas, last November. Mark Ralston /AFP/Getty Images hide caption 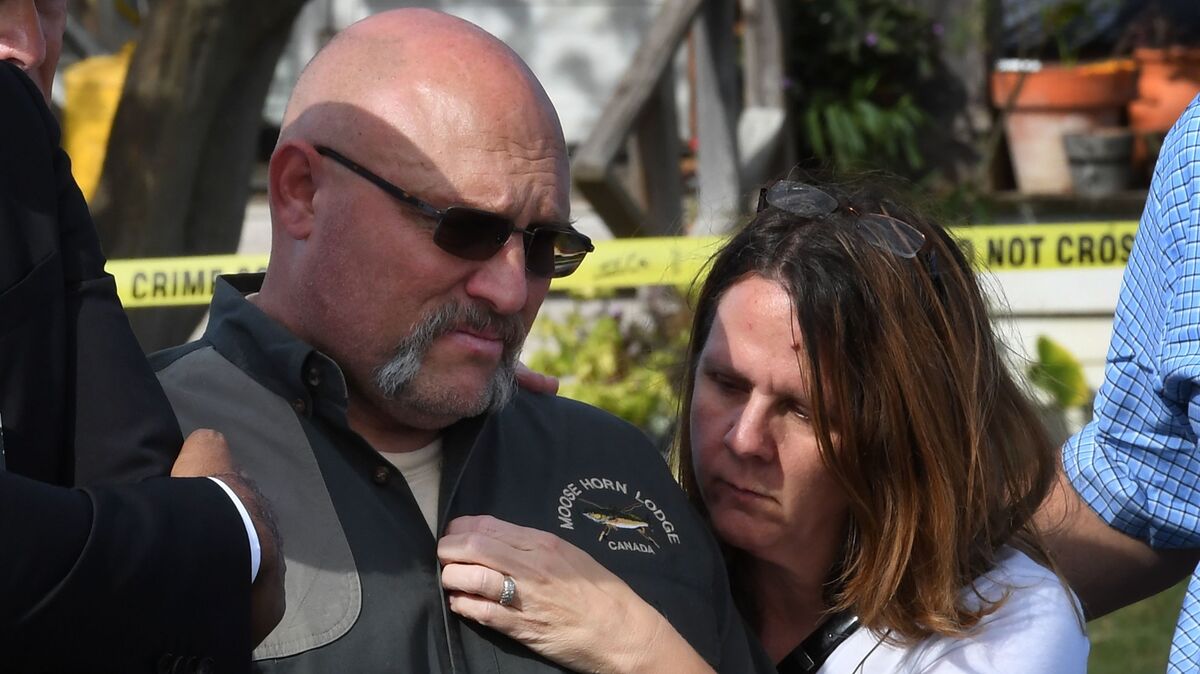 Pastor Frank Pomeroy and his wife Sherri speak during a press conference at the entrance to the First Baptist Church, after a mass shooting that killed 26 people in Sutherland Springs, Texas, last November.

Survivors of mass shootings are facing relentless harassment and renewed trauma from conspiracy theorists who claim the attacks were staged by the federal government.

From Sandy Hook to Parkland, the idea that the victims are hired actors who stage tragedies in order to achieve sinister political goals has drifted from dark corners of right-wing media into the mainstream.

Jodi Mann and Robert Ussery, the pair of conspiracy theorists who run the website, "Side Thorn Journalist," have been harassing survivors of the November shooting on a Texas church for months.

They say the attack on the First Baptist Church of Sutherland Springs, Texas, was an inside job orchestrated by the Department of Homeland Security. They don't believe the 26 people who were killed ever existed or that their graves are real.

Earlier this month, Rev. Frank Pomeroy, the pastor who lost his 14-year-old daughter Annabelle in the shooting, confronted Mann and Ussery when he saw them writing a note on a poster board outside the church.

"In the beginning, I believed him probably just wanting attention and or notoriety of some sort," Pomeroy tells Here & Now's Robin Young. "However once engaging with him for 15 minutes, I realized by looking into his eyes, he not only believes some of the things he's saying, but you could just see that he's not engaging with the real world the way everyone else is."

When Mann and Ussery started yelling and threatening Pomeroy, a church member nearby called the police. Mann and Ussery were arrested for trespassing and resisting arrest, while Ussery was additionally charged with making a terrorist threat and possession of marijuana. The pair were released from jail a few days later, according to The Dallas Morning News.

Ussery told BuzzFeed News in an email that he and Mann "are 100% innocent of all charges, expect the possession of marijuana charge, which we proudly accept."

Bizarre conspiracy theories like the one that inspired Mann and Ussery have spread in the wake of mass shootings and other violent incidents. After the school shooting in Parkland, Fla., last month, some right-wing media claimed the student survivors were hired by the Democratic Party or the FBI to undermine the Trump administration and gun rights.

"I don't think that they're able to fathom that kids our age are able to do something like that," Melanie Weber, one of the student activists, told Jeremy Hobson, "so I think their only way of explaining that is, 'Oh, they're actors,' but I can assure you that we're not."

Crisis actors are performers that play disaster victims in order to make emergency drills seem as real as possible for those practicing them. But in recent years, certain right-wing media figures have propagated the idea that disasters are staged by actors hired by the federal government in order to achieve some political aim.

Alex Jones, host of the website Infowars who has been the subject of praise by President Trump, is one of the main propagators of conspiracy theories connected to these violent incidents. Now he is staring down a lawsuit. 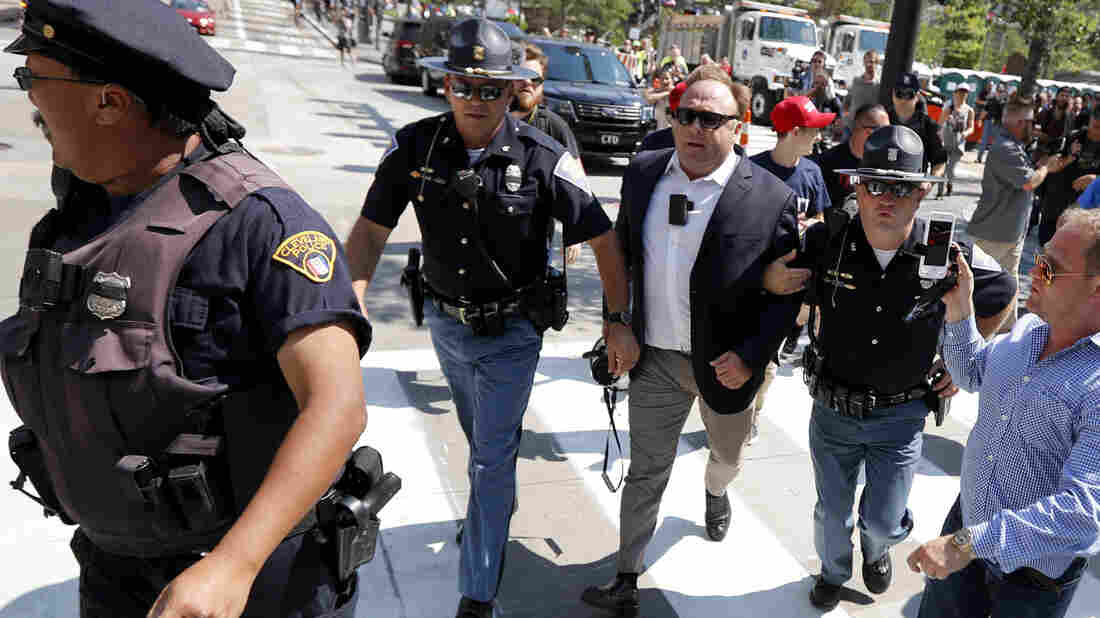 Alex Jones, center right, is escorted by police out of a crowd of protesters outside the Republican National Convention in Cleveland on July 19, 2016. Jones is facing a lawsuit for his role in spreading conspiracy theories about mass shootings and other attacks. John Minchillo/AP hide caption 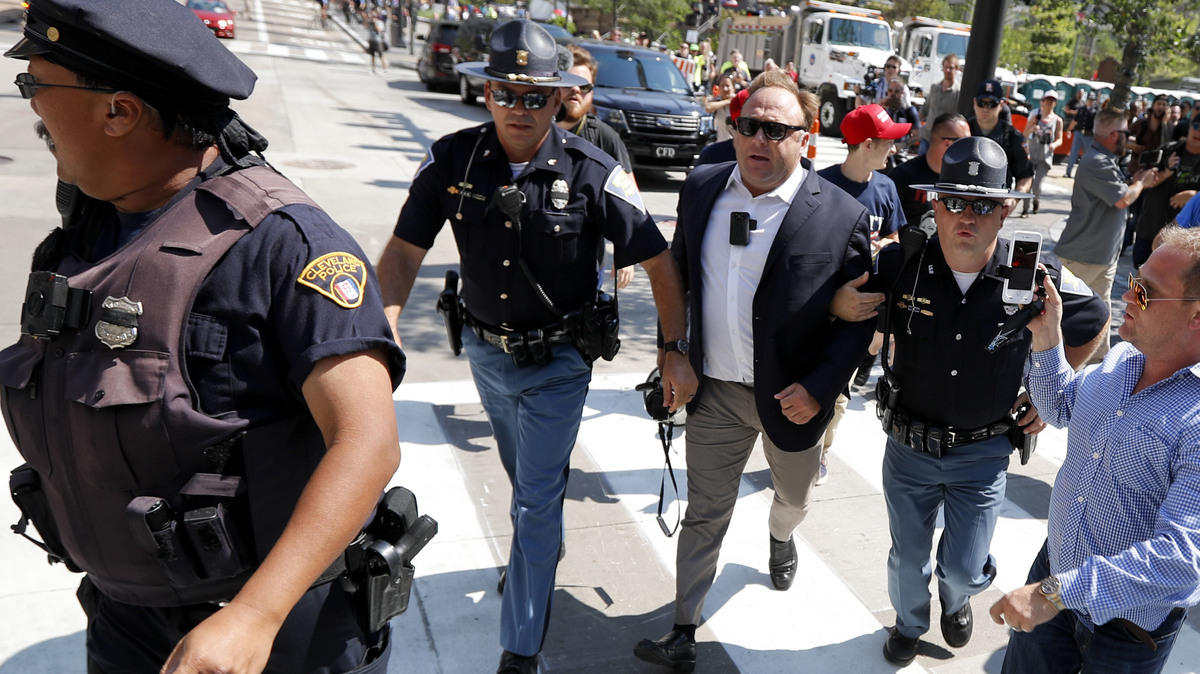 Alex Jones, center right, is escorted by police out of a crowd of protesters outside the Republican National Convention in Cleveland on July 19, 2016. Jones is facing a lawsuit for his role in spreading conspiracy theories about mass shootings and other attacks.

Brennan Gilmore says he received death threats from Jones-inspired conspiracy theorists after he shared video of the moment a driver plowed into a group of counter protesters at a white supremacist rally in Charlottesville, Va., last year. He says he's been threatened by conspiracy theorists ever since and is now suing Jones and six others for their role in spreading what he says are falsehoods.

Jones and others claimed that Gilmore, a Foreign Service officer who previously served as chief of staff for former congressman Tom Perriello, is actually an undercover CIA operative who helped stage the attack in order to undermine President Trump.

"They take vague data points from your bio — the fact that I worked in government, the fact that I worked in Democratic politics — and then draw these fantastical lines that are an attempt to provoke fear and hatred among their listeners and completely obscure the truth about what happens in any given situation," Gilmore tells Young. "We've seen this from Sandy Hook to Charlottesville to Parkland."

In a video on Infowars, Lee Stranahan, a former writer for Breitbart, implies the attack was a set-up designed to use Heather Heyer's death as fodder to overthrow the Trump administration.

"The way she's being used is she's a martyr to the cause," Stranahan said. "Are they trying to get a coup? I think clearly they are."

Stranahan told The Washington Post earlier this month that he doesn't believe Gilmore's suit is legitimate. But Gilmore and his attorney, Andrew Mendrala, say they hope to prove that people like Jones and Stranahan cannot use the First Amendment to justify their statements.

"We argue that the First Amendment does not protect speech that is directed to incite violence or threats of violence against private people, especially when that speech is demonstrably false," Mendrala says.

Sherri Pomeroy, the wife of the pastor in Sutherland Springs, says that encountering conspiracy theorists online and in person has made it much harder for her to heal.

"It's been just a nightmare," she says. "They're just opening wounds and pouring salt in."