Accessibility links
What Did Cambridge Analytica Do During The 2016 Election? The company says it was essential to President Trump's victory, but both Trump and other former clients are downplaying the role of its trademark psychological profiling. 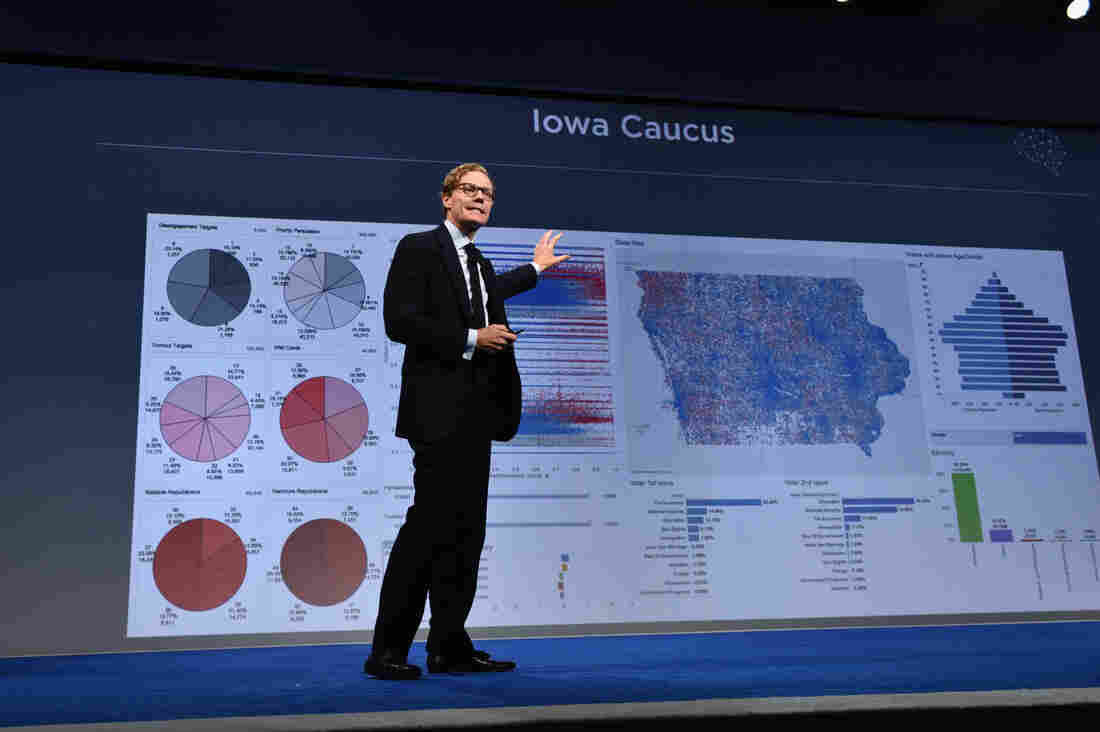 Alexander Nix, the currently suspended CEO of Cambridge Analytica, speaks at a 2016 event in New York City. Nix and his firm are accused of misusing the personal data of 50 million people as part of their political consulting work, which included President Trump's 2016 campaign. Bryan Bedder/Getty Images for Concordia Summit hide caption 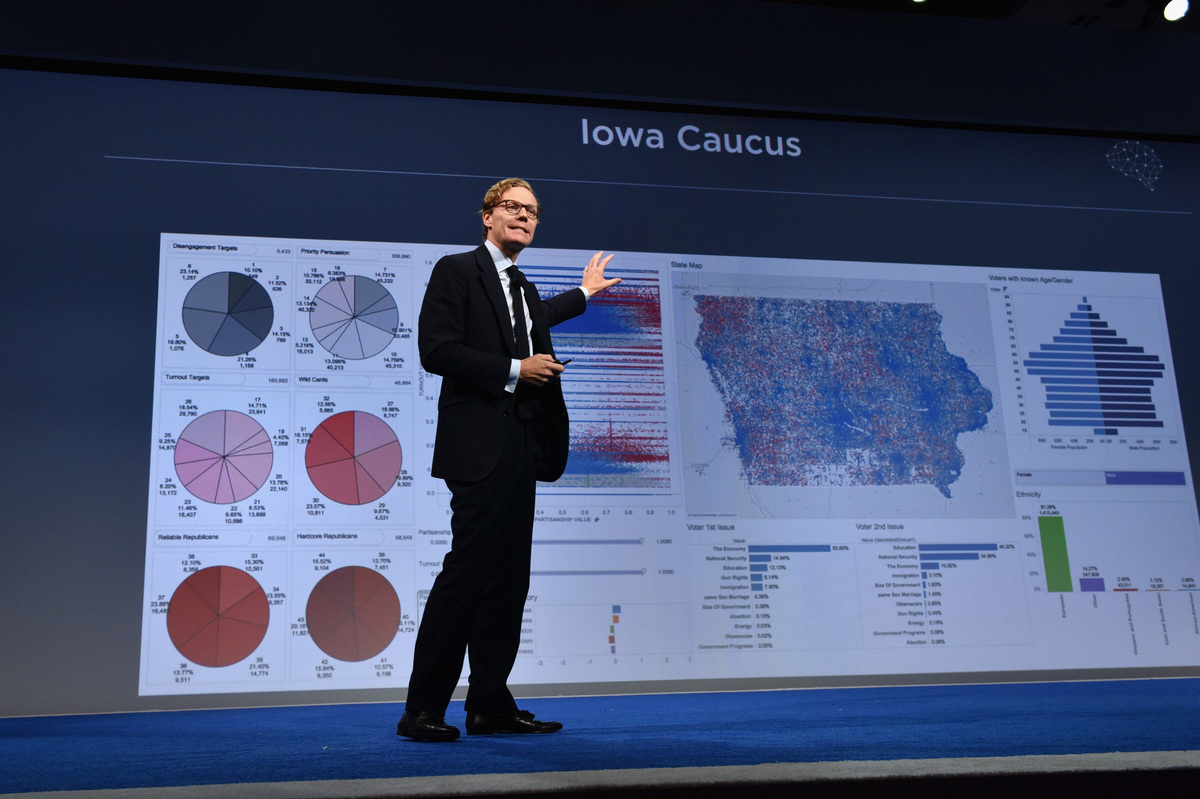 Alexander Nix, the currently suspended CEO of Cambridge Analytica, speaks at a 2016 event in New York City. Nix and his firm are accused of misusing the personal data of 50 million people as part of their political consulting work, which included President Trump's 2016 campaign.

It has been a bad week for Cambridge Analytica.

Multiple state attorneys general are launching investigations in the U.S. into the company's misuse of 50 million Facebook users' personal data. The company has been suspended from Facebook in the wake of a New York Times report revealing that it violated Facebook's terms of service for using personal data. And, following a series of undercover sting reports capturing CEO Alexander Nix making outlandish claims about the company bribing politicians or entrapping them by "sending some girls to the candidate's house," Cambridge Analytica's board has suspended Nix from the company.

It's all a far cry from the beginning of the 2016 presidential campaign, when Cambridge Analytica waded into American politics with the goal of giving conservatives big data tools to compete with Democrats. Its big promise: developing detailed psychological profiles of every American voter, so that campaigns could tailor their pitches from person to person.

"We've been appealing to the same demographic on the same issue," Nix told NPR in February 2016, "yet how we nuance this engagement is completely different."

No, Cambridge Analytica couldn't fully capture the personality of every single voter. But here's how Nix pitched the company's approach at the time. Cambridge Analytica worked with researchers to develop "a 120-question survey that seeks to probe personality," he said. "And we've rolled this out to literally hundreds and hundreds of thousands of people across America."

The company asked all sorts of questions about personality and behavior. Then it scored people on traits like openness, extroversion and agreeableness — aspects of the typical "big five" personality traits.

Those results were mixed together with polls, voter records and online activity in order to create personality models for voters. Cambridge Analytica may not have talked to you, Nix said, but "if I talk to enough people who look like you, in terms of what data they have, I'd be able to quantify your personality based on the discussion I've had with other people."

This week, the Times reported that Cambridge Analytica collected a lot of this information by breaking Facebook's rules. An outside researcher affiliated with Cambridge University, Aleksandr Kogan, developed an app for the company that required users to sign in using their Facebook accounts.

Facebook's rules at the time allowed the app to suck up information about all those users and, even more importantly, information about their friends. That data included education, location, the groups and pages they liked, their relationship status, and where they worked.

Kogan, who created the app, was allowed to collect all this information for academic purposes. What he wasn't allowed to do was pass the data along to a third party, instead of using it for research, as had been promised.

Facebook has now suspended Cambridge Analytica and Kogan from the platform.

All this data went into the company's much-hyped psychological profiles. While Cambridge Analytica is now associated with Donald Trump's general election campaign, it was Texas Sen. Ted Cruz who first employed the firm.

Ted Cruz Thinks He Knows Why You're Reading This Article

The Cruz campaign went all-in on political science theory and big data approaches to campaigning, and divided voters into six different psychological profiles during the early primaries. The campaign reached out to voters it grouped as "timid traditionalists" with different messaging than it did for "temperamental" voters, even if the calls, emails, and flyers were about the same Cruz stances on the same topics.

The psychological profiling got a lot of media attention after Cruz won the Iowa caucuses, especially after Nix publically claimed credit for the win in a series of media interviews.

But as the campaign advanced, the Cruz campaign became skeptical of the approach. It ultimately phased out the psychological profiling attempts after the South Carolina primary, even though Cambridge Analytica staffers remained attached to Cruz's campaign.

"In explicit contractual language, Cambridge Analytica affirmatively represented that all data used by them were obtained legally, that they would conduct their operations 'in accordance with all applicable laws and regulations,' and that they 'hold all necessary permits, licenses and consents to conduct its operations,' " Cruz spokeswoman Catherine Frazier said in an emailed statement this week.

Cruz ended his campaign for president after the Indiana primary. With Cruz out of the race and Trump on his way to lead the Republican ticket, Cambridge Analytica began working for the GOP nominee. This shift paralleled the migration of the Mercer family, major Republican donors with a significant financial stake in the company.

While Cruz's campaign had embraced data science and was willing to experiment with political science theories that had never before been tested on the presidential level, the Trump campaign's data operation had been nonexistent. Shortly after winning the Republican nomination, Trump told the AP he viewed data as "overrated" in politics.

"We did all the research, all the data, all the analytics, all the targeting, we ran all the digital campaign, the television campaign, and our data informed all the strategy," Nix unwittingly told Britain's Channel 4 in their undercover sting.

But, according to a source close to that operation, psychological profiling never entered into the picture. Given Trump's lack of digital infrastructure, the Cambridge Analytica staffers focused on much more basic goals, like increasing online fundraising, reaching out to undecided voters, and boosting Election Day turnout.

People involved in both the Cruz and Trump campaigns say they never used the data Cambridge Analytica illicitly acquired from Facebook. And both campaigns ultimately soured on both the company and its CEO.

Nix continues to brag about Cambridge Analytica's efforts. It's just that, in the most recent episode, he didn't realize he was doing so on camera.