Accessibility links
'National Geographic' Turns The Lens On Its Own Racist History Generations of Americans had their worldviews shaped by photo and editorial choices that the magazine now says were racist. But some scholars and staff photographers knew that decades ago. 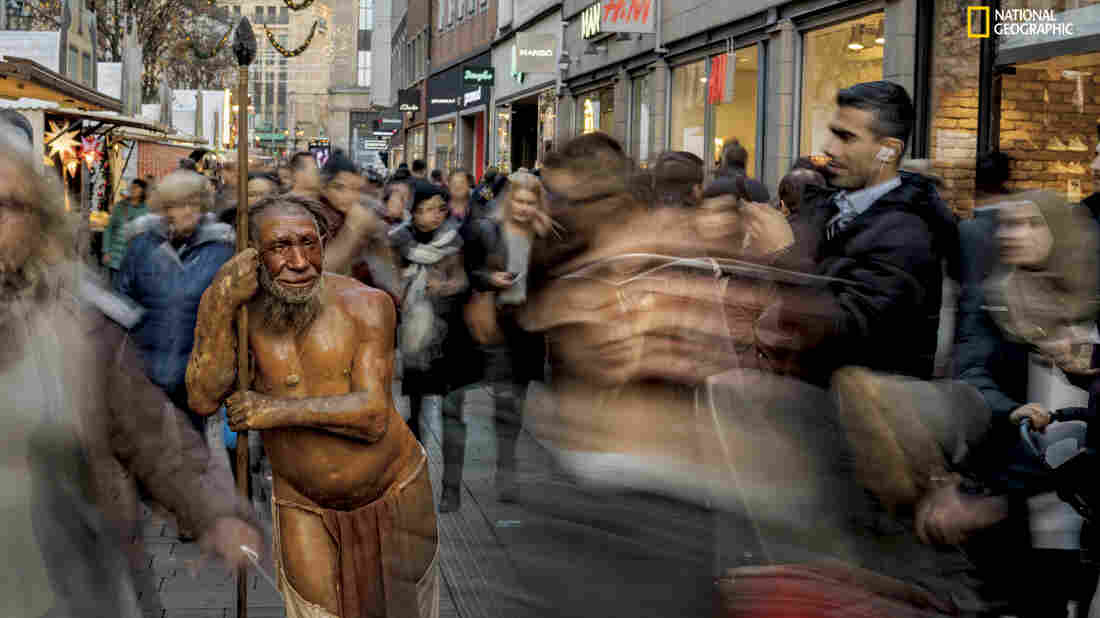 In Düsseldorf, Germany, a sculpture from the nearby Neanderthal Museum draws curiosity and recognition from passersby. The image is featured in the April issue of National Geographic magazine, a single-topic issue on the subject of race. Robin Hammond/National Geographic hide caption

For generations of Americans — especially white Americans — National Geographic was the primary source of information about those cultures. This was pre-Internet and cable TV; most readers probably didn't know they were getting a narrow vision of the world. National Geographic showed images of people and places that most Americans never even knew existed.

In the 1950s and '60s, in white, suburban New Jersey, Catherine Lutz says she "devoured every issue. It was this beautiful and exciting set of pictures and stories." She even credits National Geographic with inspiring her to pursue a career in anthropology.

"It stood for science," Lutz says. "It stood for education. It was used prolifically in schools. It also stood, though, for a kind of white view of the world." 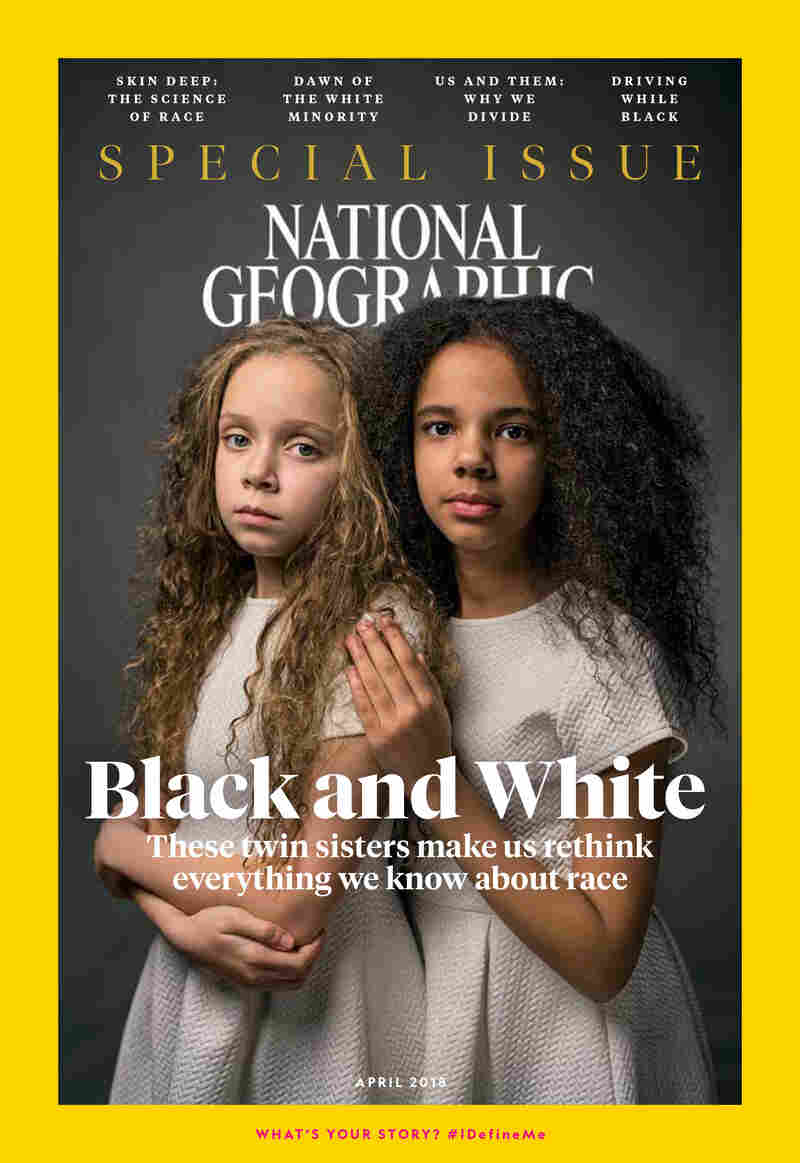 Call it adventurous, American colonialism. The mandate from Gilbert H. Grosvenor, one of the magazine's earliest editors: Print nothing "controversial" or "unpleasant."

"It's an ideal world," she says of the magazine's coverage. "It's safe, and it's basically free of problems. Just lots and lots of smiles."

National Geographic wasn't like Life or Time magazine. You didn't see the ugliness of war or poverty. You also didn't see progress being made in developing countries.

For Jim Stanfield, that was kind of the point. He was a staff photographer for almost 30 years, beginning in the late 1960s.

"I was trying to find tribal areas where these people were 1,000 or 2,000 years old," he says. "And I was trying to hunt up people that traveled by the same mode of transportation, dressed the same way, had the same kind of jewelry."

Stanfield — who is white — says that showing, for example, half-naked women from those tribes wasn't racist: "They were just trying to pass on different cultures and the way other people lived. And you couldn't go to Africa without seeing topless natives," he says. 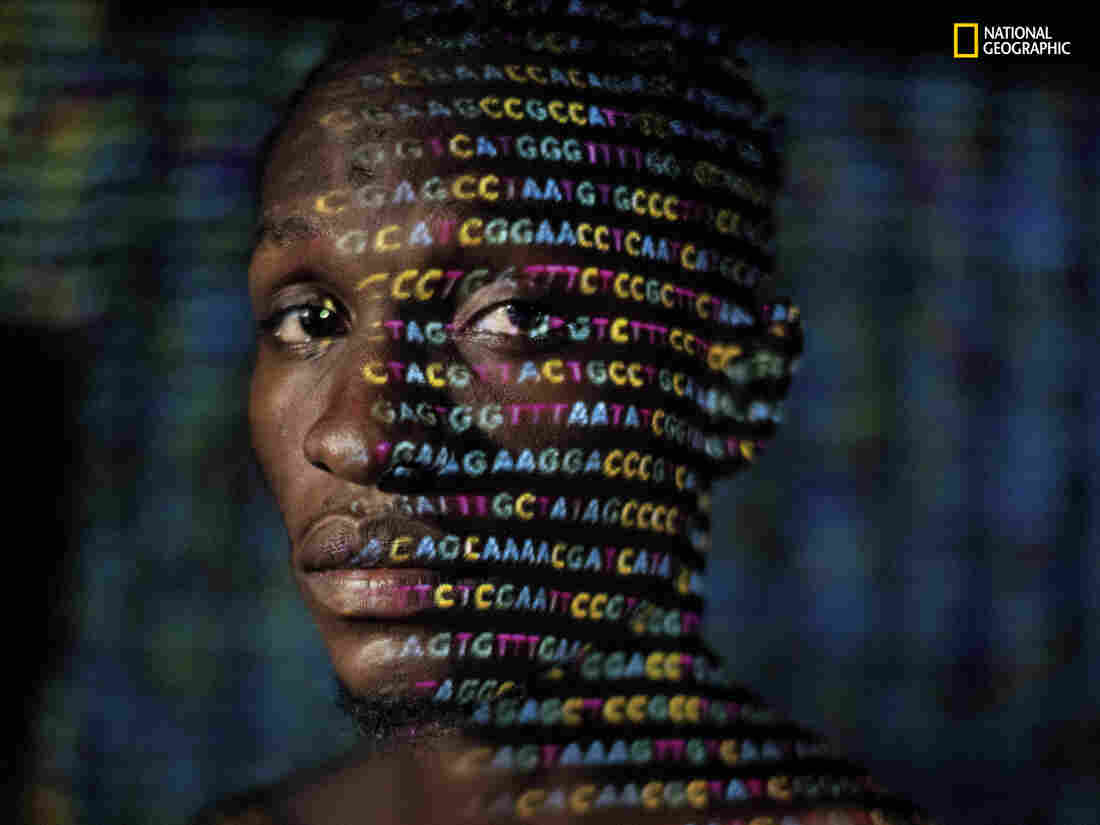 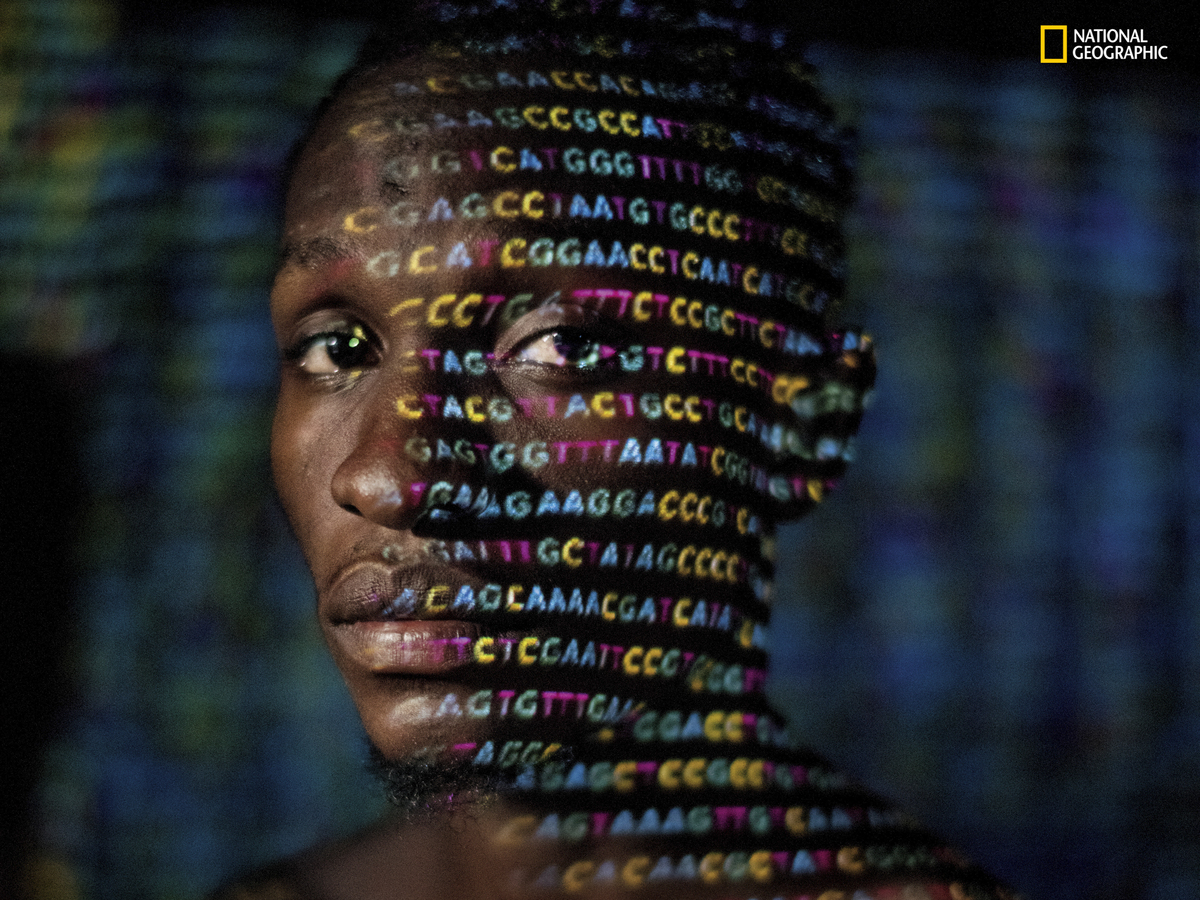 In the April issue of National Geographic, the four letters that represent the genetic code — A, C, G and T — are projected onto Ryan Lingarmillar, a Ugandan.

Lutz looks at it differently.

"There's also a lot of places where you could see men with their penises out, men and women with genitals out," she says. "Those pictures never appear in the magazine, so they made choices all the time."

In 1962, for example, an article about South Africa barely mentioned the brutal Sharpeville massacre from two years earlier, in which white police killed and wounded some 250 black protesters, including women and children.

"That article was a disgrace," says photographer Jim Blair, who's also white. "It was written by someone who was old, was very rigid, was pro-segregationist."

Blair was just starting out at National Geographic in the early 1960s. And here's where small changes begin at the magazine. He says he was part of a generation of photographers who fought the status quo.

"We were in our 30s," he says. "The people who were running the [magazine] were in their 60s, so there was a 30-year gap. And of course we wanted change. We wanted it to reflect what was going in the 1960s, not what was going on in the 1940s — the kind of country-club attitude that white people had towards blacks."

'National Geographic' Reckons With Its Past: 'For Decades, Our Coverage Was Racist'

In the 1970s, Blair took a now-famous photo of Winnie Mandela on a trip to South Africa to cover apartheid and oppression. John Edwin Mason, an African-American historian recently hired by National Geographic to look through the archives for the new race issue, says it took individual dissenters like Blair to force change.

"Until the 1970s, I don't think that those dissenters got very much traction," he says. "But I think it's important to recognize that they were there, and internal change doesn't just happen automatically."

"That's not to say that as professionals we can't tell other people's stories, but I also think that we're living in a time where people should be able to tell their own stories," Simmons says. "And that's what we're trying to achieve."

Still, the cover of National Geographic's new race issue is an image taken by a white male, and the photography staff is still majority white.

Times change. Values change. Institutions can be slow to catch up.