Accessibility links
Kobach Trial Ends, Judge Now Deliberating On Kansas Voting The trial has ended in the lawsuit alleging Kansas Secretary of State Kris Kobach's requirements to register to vote in his state are unreasonable. A federal judge will rule on the suit within months. 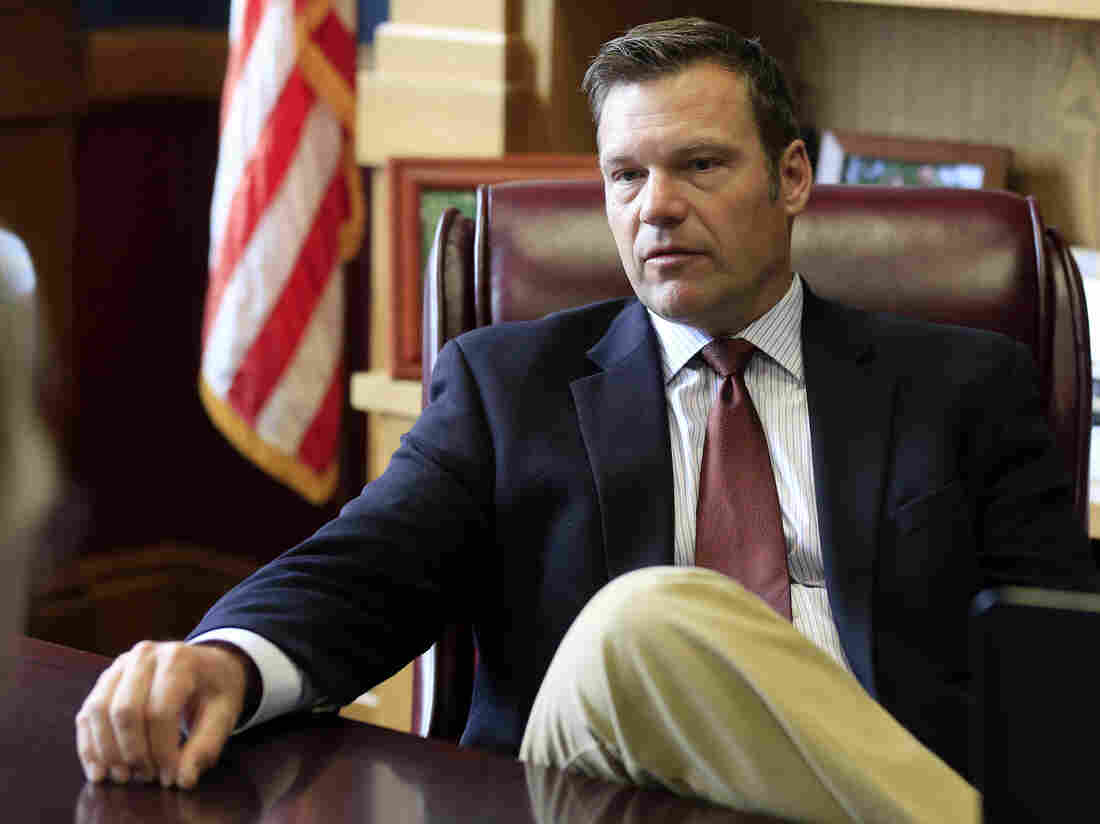 Kansas Secretary of State Kris Kobach in his Topeka office in May, 2017, after he was appointed by President Trump to co-chair the Presidential Commission on Election Integrity. Orlin Wagner/AP hide caption 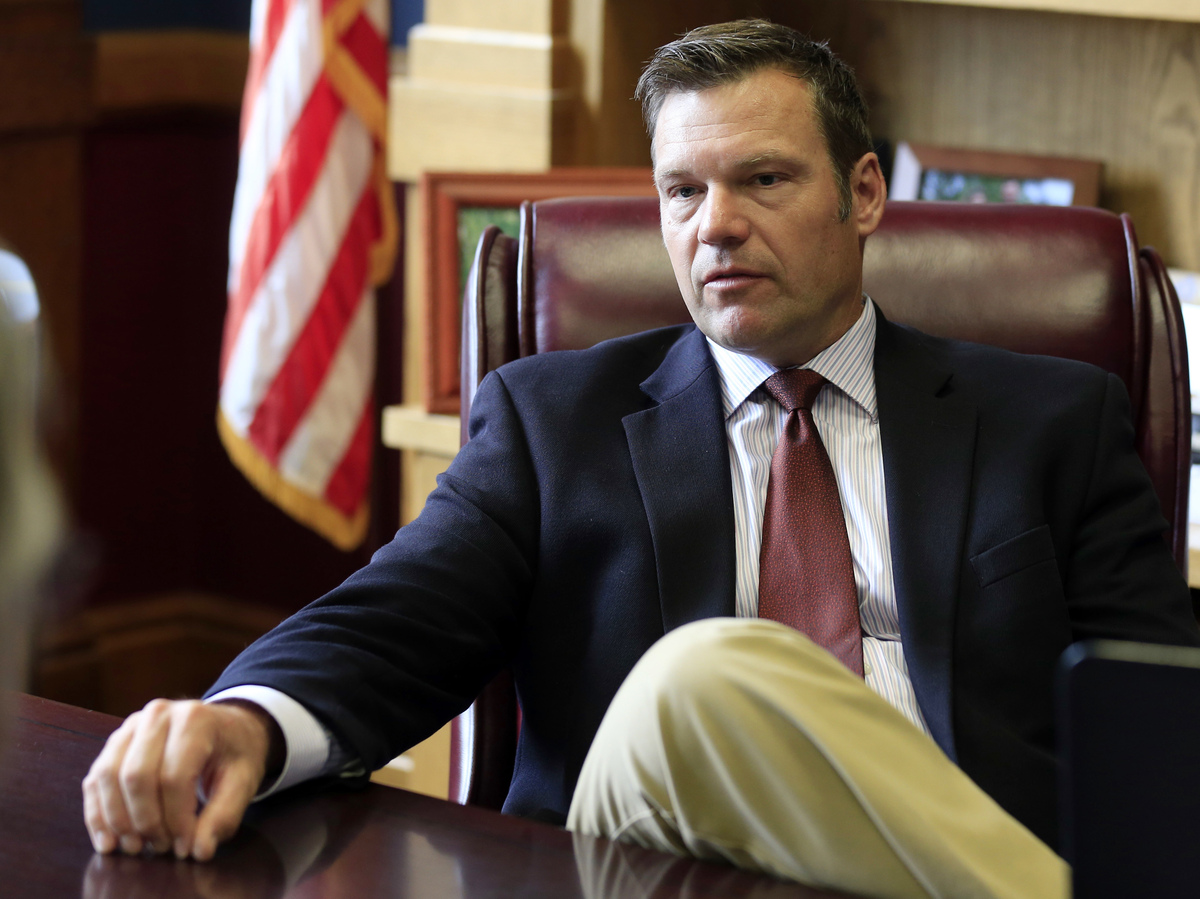 Kansas Secretary of State Kris Kobach in his Topeka office in May, 2017, after he was appointed by President Trump to co-chair the Presidential Commission on Election Integrity.

Kansas Secretary of State Kris Kobach got a tongue lashing Tuesday from the judge who will decide whether he violated federal law by blocking tens of thousands of voter applications.

In the nearly two years since Robinson ordered him to register those voters, she said, he has forced her and the American Civil Liberties Union to monitor his actions down to the tiniest details in an effort to get him to comply.

It's an election year, your honor, and there's no more time for games.

The ACLU, representing Kansans suing Kobach, asked Robinson in September, 2016, to hold Kobach in contempt for failing to comply with her May, 2016, order to fully register would-be voters. Their applications lacked birth certificates or other documents Kobach demanded under a 2011 Kansas law.

A series of back-and-forths between Kobach, the ACLU, and the judge since then have turned on what actions were needed to meet the court's order. They centered on requiring Kobach to ensure the registrants would know they could vote, and that county election officers would know to treat them the same as other voters.

The ACLU argued Tuesday that Kobach didn't follow through. Robinson will consider whether to hold him in contempt while working on a ruling in this month's trial against Kobach.

That trial wrapped up Monday. Kobach stands accused of violating federal law by refusing to register more than 30,000 legitimate voters who signed up to vote through driver's license offices.

"It's an election year, your honor, and there's no more time for games," ACLU lawyer Dale Ho told Robinson.

Kobach, who hopes to be Kansas' next governor, asked the judge not to find him in contempt. The Republican candidate argued he doesn't control the county officials who carry out logistics such as sending postcards to voters to let them know where their polling stations are.

That's one of the things the ACLU said has been a problem: Not all the voters protected by Robinson's 2016 preliminary injunction have been receiving the postcards.

Robinson, at times sounding livid with the secretary, gave him a dressing-down.

"These people are not second-class registered voters," she told him. "You assured me that they had or they would get the postcards."

She questioned why Kobach had had no problem getting Kansas' 105 counties to require birth certificates and similar documents from voters in recent years, yet denied he could make them mail postcards or comply with other aspects of her orders.

He urged the Kansas legislature to adopt a law that required would-be voters, starting in 2013, to show passports, military papers, birth certificates, or other documents proving they are citizens. That prompted a lawsuit by the League of Women Voters, saying it decimated voter registration drives, and by Kansans who say they were blocked from voting because they lacked such papers.

The ACLU is representing them. It says Kobach can't enforce his law on voters who register while getting or renewing their driver's licenses because they are protected by the 1993 Motor Voter Act.

That law created the streamlined process for registering to vote at driver's license offices, where around 40 percent of Kansans put themselves on the voter rolls.

To win his case, Kobach had to prove a significant number of non-citizens illegally registered to vote and that making people show proof of citizenship is the only way to stop it.

He denied allegations of voter suppression, and put experts on the stand to present polls and surveys that they say show almost all Kansans have easy access to documents like birth certificates. He also called witnesses to bolster his case that there are thousands — or even several tens of thousands — of
non-citizens already on Kansas' voter rolls.

The ACLU said the polls and survey conclusions are statistical extrapolations from questionable sources that make fatal math errors and assumptions that academics widely regard as bogus.

The scolding that Kobach endured Tuesday was just one of many he and his legal team received during the trial over the past few weeks. Robinson repeatedly chastised them for attempting to submit evidence they hadn't shown the ACLU in advance of trial, and for violating other court procedures.