Accessibility links
Comic Roy Wood Jr. Taps Into America's Psyche On 'The Daily Show' Wood says the years he spent performing in comedy clubs in the South and Midwest — sometimes in places where he felt unsafe as a black man — prepared him for his work on The Daily Show. 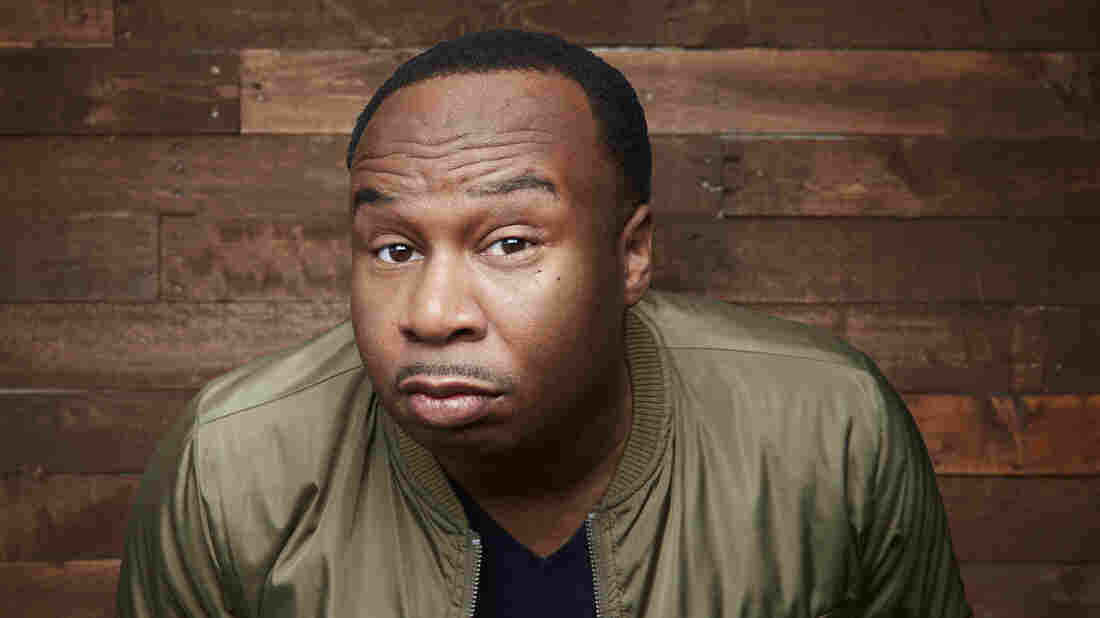 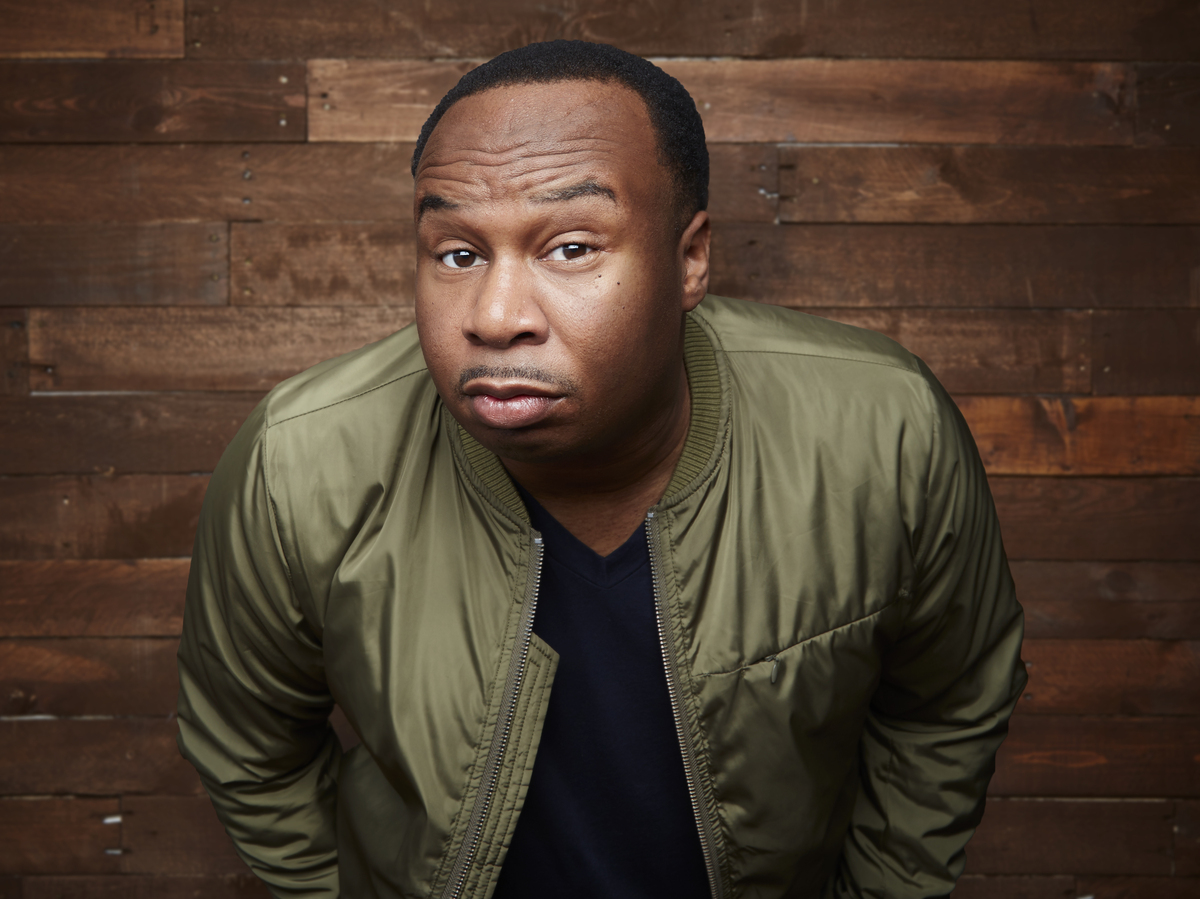 Roy Wood Jr. is a correspondent for The Daily Show.

Comic Roy Wood Jr. is now a correspondent for The Daily Show, but he got his start performing in comedy clubs in the South and Midwest — sometimes in places where he felt unsafe as a black man.

"I did a lot of shows in a lot of strange places," he says. "I've been called the n-word from the stage by somebody in the crowd and the club owner did nothing to defend me."

After a show, Wood would sometimes drive three or four hours out of town rather than sleep in a place where he felt unsafe. But looking back now, Wood, who grew up in Birmingham, Ala., is grateful for those early experiences.

"I'm thankful for those gigs because that's the type of stuff that now, with The Daily Show, it gives me an opportunity to tap into who some of the audience is," he says. "If nothing more, my first nine or 10 years of comedy were a very, very bitter education on the psyche of the middle of the country."

In addition to appearing on The Daily Show, Wood hosts the Comedy Central series This Is Not Happening, in which comics tell stories about things that happened to them in real life. He also starred in the 2017 Comedy Central special Father Figure.

On writing the Trump rap sketch for The Daily Show

We were just talking about how much Trump brags. He literally is like a rapper — he talks about his house, his boat, his properties — and I started talking about it with Jordan Klepper, who was a correspondent at the time (this was before he was hosting The Opposition). Klepper [and I] said, "I bet if we dug deep enough into his tweets we could find enough bars to put into stanzas to make a full-blown rap song."

The Microsoft Word document [we created] was font size 12, single-spaced and it was about 20 pages of just quotes and tweets and anything braggadocios and we neatly went through and found line by line and put it all together.

On experiencing racism in different parts of the country

Comic Jordan Klepper Assumes An Anti-Fact Persona On 'The Opposition'

I think the difference between Southern racism and Northern racism is that in the South you know where you stand and ... when you know where the boundaries are, then you kind of know how to play the game a little bit more. So if someone's going to openly say, "I don't like you people and I'm going to hang a [Confederate] flag over my door to remind you I don't like you people," then I know not to eat at that business. How much cleaner is that than me sitting there and getting bad service for an hour and a half, complaining to the manager and nothing happening? Which one is more tormenting? The Confederate flag is literally more convenient. You save me 90 minutes.

On growing up in Birmingham, Ala.

I grew up ... on the Westside, the neighborhood is called West End 35211, one of the worst zip codes in the city in terms of crime statistics at the time. ... Pretty rough neighborhood. On the back side of the crack era. ... We moved in on the back end of white flight, so in the '80s we had a couple of white neighbors but by the early '90s and crack had really taken over it was pretty much an all-black neighborhood.

The one thing I've kind of joked about sometimes — but it's actually true — is that if you're going to live in gang territory it behooves you to live deep in gang territory, because where I lived in Birmingham, most of the shootings were happening where territories met, on borderlines almost, if you will. So there were a lot of bad people, but a lot of the bad stuff that happened in the hood happened more so on the outskirt areas in relation to where I lived.

The saving grace for me in my neighborhood was that my parents bought me a really nice basketball goal. ... We had one of the few houses in the neighborhood with a two-car garage, a very wide two-car garage, which meant the way the goal was set up you could play almost half-court if you played off into the dirt off into the driveway. So we basically had half-court, and so all the gangbangers came to our house to shoot hoops, so I met everybody in the hood. ...

My father was a radio personality in the city and he was highly respected. My dad was a civil rights journalist back in the '60s and '70s. Any march you can find any footage of, I'm sure my dad is no more than two or three steps behind Dr. King, covering the march. And so when it comes to black political talk and when it comes to black political commentary and playing the blues and my dad did the morning news on the radio. My father was the voice of the city of Birmingham for a very long time. His name rang out. And out of respect to my father, guys would leave guns around the corner, they would leave their liquor up the street and when they came to our house it was Switzerland. So you might see a Vice Lord and a Gangster Disciple, it's plausible, right there in our driveway. And there's no drama, out of respect to my father and my mom.

On his parents' response to him sneaking Playboys

I found some Playboys in the attic that were my dad's from way back when, and I got the bright idea to stash them in the living room, because they'll never check there, they'll check my room, but you won't dare check the living room couch. And sure enough, they found them and the first thing my father did was sit me down and talk about objectifying women and why it's wrong and then he gave me a quiz on all the parts of the reproductive system, male and female.

My dad basically, by turning into this weird encyclopedia moment, he desexualized a woman's body, because now it's, "You better know the ovary, the fallopian tube. You better know everything about this if you're going to look at stuff." ...

That was kind of the first real bird-and-bees conversation. It made it so boring! You see a rap video and you're like, "That's a gluteus! That is not a big butt!" The moment your dad makes you call a butt a gluteus, it just does it.

For me, [the toddler years] don't matter as much as the ones to come. If I had to pick a 10-year stretch to be physically present and there I would pick 10 to 20 versus 1 to 10. ... Because 10 to 20 is where you really get an opportunity to shape and really infuse the morality.

You lay the groundwork that first decade, but that second decade, you know, it's for me, raising a black man in this society, a 6-year-old can't understand the conversations that I need to have with him about consent and about how to deal with the police, about how to make sure he gets a bag when he leaves that store. A 13-year-old can, and those are the lessons that will maybe save his life. So if I have to be gone an extra weekend to make enough money so that I don't have to work later on, or that I can work smarter later on, then I'm going to be gone.

Heidi Saman and Thea Chaloner produced and edited this interview for broadcast. Bridget Bentz, Molly Seavy-Nesper and Patrick Jarenwattananon adapted it for the Web.