Accessibility links
'The Gunners' Seems Simple At First ... But Keep Reading Rebecca Kauffman's new novel centers on a group of friends who reunite after a funeral, and spend an evening together. It's a deceptively simple story with a powerful message: Accept your feelings.

'The Gunners' Seems Simple At First ... But Keep Reading

'The Gunners' Seems Simple At First ... But Keep Reading 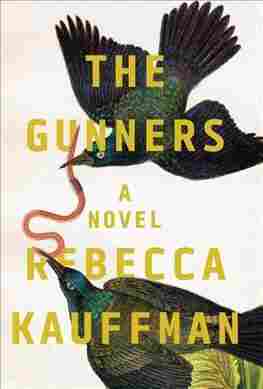 Rebecca Kauffman's second novel, The Gunners, doesn't seem complex at first. The Gunners of the title are a group of friends from outside Buffalo, not far from where Kauffman set her first novel, Another Place You've Never Been. All but one of have left home, but the novel begins when they return to town — the group's first reunion in ten years — for a funeral. They spend a night together, telling secrets and making confessions. Each character has something to reveal, and each character gets resolution in return. Structurally, it's simple.

The writing can seem simple, too. Unusually for a literary novelist, Kauffman has no fear of overt feeling. When she explores an emotion, she does it with absolute candor. Her characters announce their grief and affection and rage in a way that few others do. Even her figurative language is direct. Take Mikey, the only character who still lives in Buffalo: Sitting with the rest of the Gunners, he asks, "Are we having fun?" And Kauffman tells us straight up that "Sometimes Mikey felt like he was watching his friends through binoculars, even when they were right before him." Tell me you don't know how that feels.

If it's rare for a contemporary literary novelist to address emotion so bluntly, it's even rarer if that novelist is female. It's not hard to figure out why. A few years ago, the fiction writer Claire Vaye Watkins laid it out in a blistering lecture called "On Pandering." Female writers, she explained, are trained to write toward men, for men, for male approval. Approval is key, because it's approval that turns into book sales. Or, as Watkins put it: "I wanted to write something Cormac McCarthy would like, something Thomas Pynchon would come out of hiding to endorse, something David Foster Wallace would blurb from beyond the grave."

I recently re-encountered this idea in a phenomenal essay Lili Loofbourow wrote for the Virginia Quarterly Review. Loofbourow's topic is what she calls "the male glance," which is the critical and cultural counterpart to Watkins' pandering. If a novel seems female, by which I mean if a novel has a woman's name on the spine, we are much less likely to expect it to be brilliant. Even worse, Loofborouw writes, we're much less likely to expect it to be intentionally brilliant. If it's a work of genius, it's an accident. Meanwhile, if a man's novel isn't a work of genius, he was trying, poor guy. Let's give him another shot.

Why do I bring this up? Because I read "The Male Glance" when I was a few chapters into The Gunners, and I understood that my expectations were too low. I had taken Kauffman's disarming honesty at face value, by which I mean I mistook it for naiveté. In other words, I failed as a reader. I'm embarrassed to admit this, but it's not a bad object lesson. I'm female, a writer and critic, an avid watcher of Insecure, Broad City, Girls. (Hannah Horvath's credo, season two: "I feel how I feel when I feel it!") If there's a person who should be able to read without the male glance, it's me. But the male glance is hard to unlearn.

... the brilliance of 'The Gunners' is that it helps you. Kauffman teaches you the right way to read her prose.

And the brilliance of The Gunners is that it helps you. Kauffman teaches you the right way to read her prose. To put it in Loofbourow's terms, she shows you how intentional she's being, how canny a writer she is — and she does this through Mikey's best friend Alice, who is directness personified. About halfway through the novel, Mikey comments that "he'd always admired her ability to fly in and out of intense emotions without ever touching ground." Up to this point, Alice's emotions are so wild they are almost unbelievable. Immediately after, Kauffman shows you how tactical they are: Alice deploys her emotions to make the rest of the group sit up and pay attention, not to her but to themselves. Her intensity propels the book forward.

At the end of "On Pandering," Claire Vaye Watkins talks about the way she wants to write. "I don't want to be praised for being 'unflinching,'" she says. "I want to flinch. I want to be wide open." The Gunners is a wide-open novel. It's a statement against stoicism and evasion. By the end of the novel, Alice has persuaded Mikey, who's never been cared for in his life, to let her take care of him. She's pushed him into a happier adulthood than he was able to claim for himself.

Another thing literary novelists don't often let themselves do is write novels with morals, or messages, but The Gunners has one. It's clear, though not easy: Accept your emotions. Feel them bluntly, plainly. Allow yourself to flinch. There isn't a better way forward. Not in life, and not, I suspect, on the page.