Accessibility links
'Pacific Rim Uprising': Just As Goofy, More Efficient Guillermo Del Toro isn't in the directing chair for this return to the world he built in 2013's Pacific Rim, but that film's most gleefully goofy qualities remain.

'Pacific Rim Uprising' Serves Up Another Helping Of Mech And Cheese

'Pacific Rim Uprising' Serves Up Another Helping Of Mech And Cheese 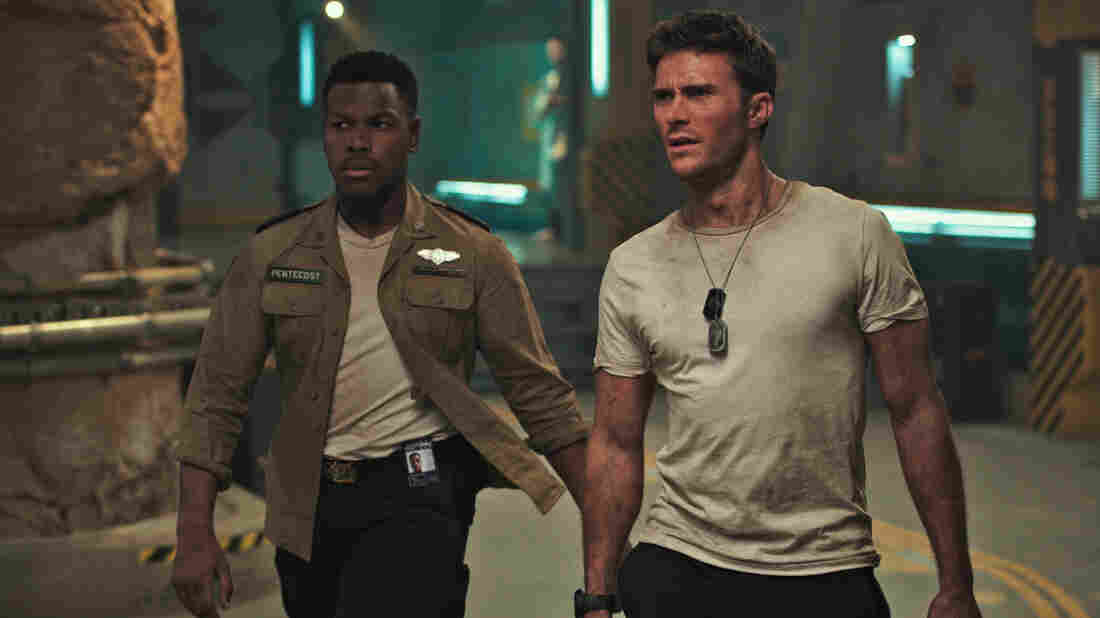 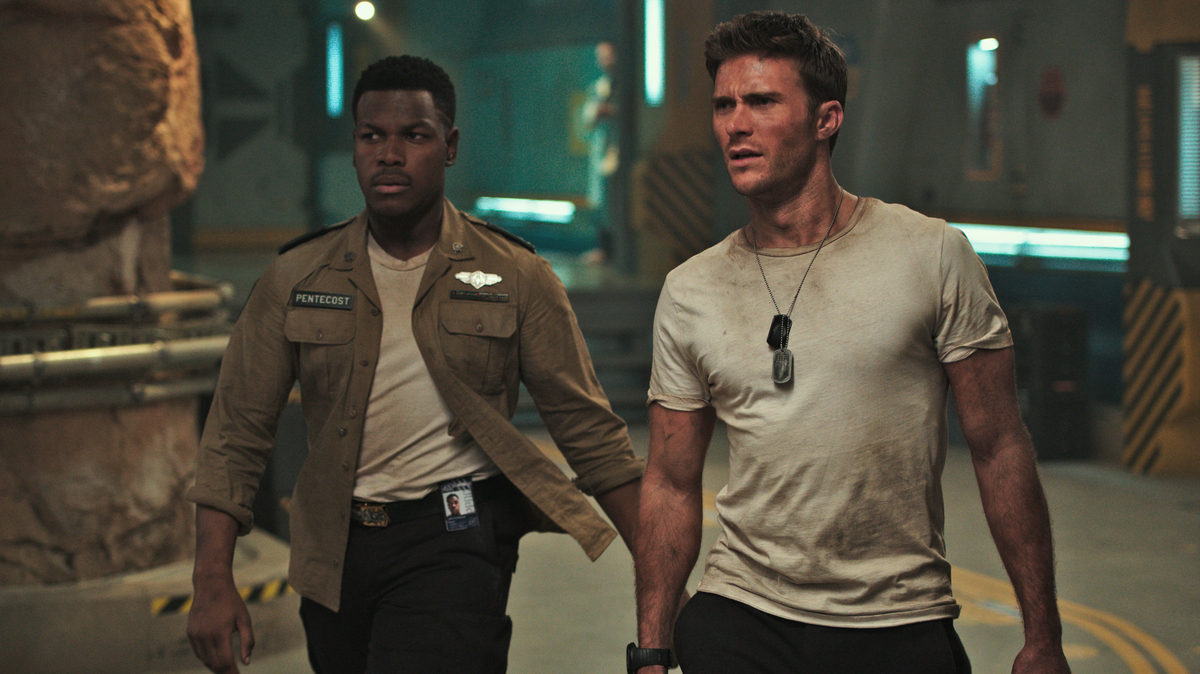 (THE FILM CRITIC steps to the podium.)

CRITIC: Good evening. Thank you all for coming. I'll read a brief statement, and then I'll be happy to take your questions.

(He removes a piece of paper from his jacket pocket, unfolds it, and begins to read.)

(He folds the paper before him, and sticks it back in his jacket pocket.)

I'll take your questions now. Yes, in the front?

REPORTER #1: No, I just wish to express my pained disgust.

REPORTER #1: I saw the trailer, and I said to my wife Simone, "Uch, there's no way in Hades I'm sitting through that, imagine ... "

REPORTER #1: ... and then we clucked our tongues, the way we do, and sat there a while basking in our keenly developed aesthetic sense. Then we got to wondering who in the world would ever actually see it.

CRITIC: Do I agree that you shouldn't see it? I very much do. I mean, listen to yourself. You expressly do not count yourself among the cohort of giant-robots-fight-giant-monsters potential filmgoers, safe to say. So clearly you shouldn't see it. I mean ... I would have thought that was obvious. Unless ... I'm sorry, is someone forcing you to go see it? Are there armed gangs of street toughs employed by Universal Studios going house-to-house and frog-marching the hapless citizenry into Pacific Rim Uprising showings across this nation?

CRITIC: Yes, you are just saying, not asking, and I'm here to answer questions about the film Pacific Rim Uprising. This is not a forum for your smug condemnation of the fact that a given piece of popular culture is popular. This is a press conference, not Facebook. Security, kindly remove this person. Next question. Yes, you there.

REPORTER #2: What's it about, though?

CRITIC: I'm ... sorry? What's Pacific Rim Uprising about? Is that seriously your question?

'Pacific' Overture: The Apocalypse, Off To A Bang-Up Start

CRITIC: Did you come in late? Did you miss hearing me read my statement? I'm happy to read it again. (Unfolds paper, begins to read) "Pacific Rim Uprising is a movie in which giant robots fight giant monsters. It is the seq-"

REPORTER #2: No no no, I heard that. But maybe there's more you can tell us about it? How is it different than the first Pacific Rim?

REPORTER #2: That's a difference. Charlie Hunnam starred in the first film. So did Idris Elba. Neither one shows up in Pacific Rim Uprising, right?

CRITIC: That's correct. Hunnam is replaced by John Boyega, who's playing the new role of (checks notes, frowns, shrugs) Jake Pentecost, the wastrel son of Elba's character. Other new additions include spunky young rogue/ace-pilot Amara (Cailee Spaeny); the by-the-book, aggressively cheekboned ace-pilot Nate (Scott Eastwood); and a raft of raw recruits who will inevitably be called upon to jump into giant robots and defend Earth before their training is complete.

REPORTER #2: What about Rinko Kik-

CRITIC: I made that last one up, but the others are real.

REPORTER #2: What about Rinko Kikuchi as Hunnam's co-pilot/like-interest Mako, who was one of the best things about the first movie?

CRITIC: She's back, albeit in a reduced but fairly key role. Also returning is the wacky comedy team of scientists Geiszler and Gottlieb (played, respectively, by Charlie Day and Burn Gorman, whose name would also work pretty well for one of those giant robots, if you think about it — "BURN GORMAN IS GO FOR LAUNCH!"). I'll take another question. Yes, you, in the — is that a Godzilla shirt?

REPORTER #3: Um, actually it's the kaiju Otachi? From the original Pacific Rim? Whose design was inspired, according to that film's production designers Andrew Neskoromny and Carol Spier, as an homage to the dragons of Chinese mythol-

CRITIC: Sorry, who are you with?

CRITIC: And your question?

CRITIC: Ah. Interesting question. (For the rest of you, kaiju refers to giant monsters.) There are actually fewer.

CRITIC: I know, right? That surprised me, too. But then — and I can't get into precisely how — it works, trust me. That's got a lot to do with how this sequel is structured, how its story logic — which is, let's stipulate, just hella dumb — bears its own implacable inevitability. So I'd say, while there are fewer giant monsters, they're used better, if that makes sense. Next question. Yes, you.

REPORTER #4: Guillermo del Toro directed the first film, but he's stepped back to the role of producer on this one, and let Steven S. DeKnight take over. DeKnight's written, directed and/or produced lots of genre television (Daredevil, Spartacus, Angel, Buffy the Vampire Slayer) but this is his first film. How's he compare?

CRITIC: Hm. Well, you know how all of del Toro's films, even ones coated in a thick yellow layer of cheesiness like Pacific Rim, still feel like him? There's a shambling quality to them, an organic messiness, a tonal ... what, funkiness, I guess. You look at a given scene, and it seems lived-in, rich, palpable; you can almost smell it, you know?

CRITIC: Yeah, not so much here. Pacific Rim Uprising both suffers and benefits from the fact that the first film did all the heavy lifting of building its world, introducing all kinds of narrative processed-cheese-food like "The Drift" and "neural handshakes" and whatnot. The new film has some fun with that world, tweaking events from Pacific Rim in a way that nudges right up against the edge of full-on retcon, without doing that first film any real disservice. And it keeps the good stuff, like making sure we always know that the entire populace of a given city has evacuated to the safety of underground bunkers before the mech-on-monster mauling truly begins. (It's such a small thing, and it makes such a huge tonal difference.)

All of that serves to make this new film seem ... cleaner, brighter, more efficient. It knows its mission parameters, and it ticks them off with alacrity. Next question, in the back?

REPORTER #5: So you're saying it's better than Pacific Rim?

CRITIC: Remember how blithely, unapologetically cheesy it was? Like that moment that was in all the trailers — the climax of Idris Elba's putatively inspiring speech?

REPORTER #5: "Today we are CANCELLIN' THE APOCALPYSE!"

CRITIC: Right, exactly! Hilarious, right? How amazingly clunky that was? Like, it's the end of the world and we're gonna bust out our Outlook calendars? "Today we are TABLIN' THE ACTION POINT, W/R/T ARMAGEDDON!" You know?

CRITIC: Or that moment in a big battle, when it looks like Hunnam and Kikuchi are about to die, and they've gone through all their awesome giant-robot tricks like the Plasma Cannon and the — the — (mimes punching) — thing that makes it punch ... harder?

CRITIC: OH MY GOD YES THE ELBOW ROCKET. Anyway, they've gone through their arsenal. They're spent. Plasma cannon, elbow rocket, everything, and now they're running out of oxygen and sparks are flying; they're doomed. And you're sitting there, watching, and you're thinking, "I mean I guess this okay, this is pretty fun." It's like when you were a kid, watching Ultraman or The Space Giants or Johnny Sokko and his Flying Robot or Voltron, only instead of squinting at a tiny rabbit-ear television tuned to a staticky UHF station, everything is great-looking — bursting with color and action and 70 feet high. But in the back of your mind there's a voice saying, "It's good, it's fine, but something's missing — what's missing?"

CRITIC: Yeah, there aren't moments like that in Uprising, really. No sword reveal, no egregiously clunky speeches. I mean, don't get me wrong, these characters do spend a lot of time yelling out some of ... just really the doofiest things. Like, uh (checks notes) "I'VE PENETRATED THE SUBROUTINE!" and "THE TERTIARY PLASMA REACTOR!" and "FEEDBACK LOOP!" and — on more than one occasion, believe it or not — "RARE EARTH MINERALS!"

But it's ... it's not the same, you know? It's goofy and ridiculous in a knowing way that the Transformers films, for example, are very, very not and never could be — but it's not the same. Okay, one last question, yes, over here. Hi.

REPORTER #6: You haven't mentioned the performances.

CRITIC: Oh, right. Thanks for reminding me. Cailee Spaeny's quite good as the fiercely independent maverick who's drafted into Earth's defense forces — she nails the tough-but-vulnerable-rookie schtick these kind of films burn as fuel. And Boyega, of course, is so effortlessly and comprehensively charming that you just buy everything out of his mouth. Like when he mentions how handsome and sexy Scott Eastwood's character is, you almost believe it. You want to believe it, for Boyega's sake.

CRITIC: Oh, he's outfitted for sexy — he's got the cheekbones, chin, eyes, hair, body, etc — but at least in this role, he's completely inert. It's like he's one of the film's giant robots — looks great standing still, but empty, waiting for a pilot.

REPORTER #6: Okay, what about the rest of th-

CRITIC: If he were a giant robot, his cool-ass giant-robot name would be Charisma Vortex.

CRITIC: You're not writing that down? I would have thought you'd write that one down.

REPORTER #6: What about the rest of the cast?

CRITIC: The other robot-pilot recruits? They're solid. They're ridiculously attractive, and they tease each other in their robot-pilot barracks so we get to know them, and care about them, before they're flung into the meat-grinder of robot-on-monster combat. That technique is only one of the cinematic debts that Pacific Rim Uprising owes to movies that have come before it like Starship Troopers and Aliens and Edge of Tomorrow and ... well, hell, I mean you could go all the way back to All's Quiet on the Western Front, or that classic 1941 Abbot and Costello movie Buck Privates? Remember that one?

CRITIC: NO MORE QUESTIONS THIS PRESS CONFERENCE IS OVER THANK YOU.