Accessibility links
In 'All The Names They Used For God,' The Magical Meets The Harrowing Author Anjali Sachdeva spins captivating short stories around kernels of the otherworldly. She says it can be a way to overcome the impulse to look away from that which is unsettling or traumatic. 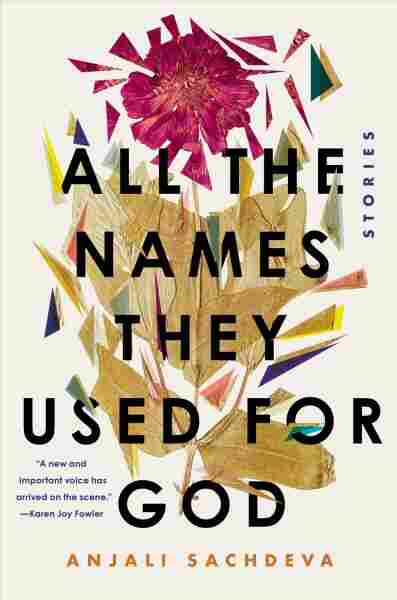 All the Names They Used for God

First, the bad news: Earth has been taken over by blob-shaped, toxic aliens, which kill humans on contact.

The good news: Although they have conquered humanity, they've left things more or less intact. You can keep your office job — but there's a catch. Each human is required to go through the painless but off-putting procedure of replacing their hands with metal claws.

The really good news is that this is all fiction, and it is part of a collection of stories that are all just as strange and captivating. The collection is called All The Names They Used For God, and it's written by Anjali Sachdeva.

In writing about what it would be like to not have hands, Sachdeva says she became hyper-aware of everything she did with her own: "You know, all the things that I wouldn't be able to feel, because within the premise of the story these metal hands work just as well as flesh hands, if not better. But I think there are things that can't be replaced by even the best technology."

I think that's actually the more dangerous kind of power, right, is the kind of power that you can ignore if you want to. You know, the kind of situation where you can keep getting your latte every morning, I think, is less likely to provoke a rebellion than the kind of thing where suddenly there are food shortages and you can't leave your house. But that's what makes it dangerous — it's the fact that we, I think, are often inclined to ignore these kind of things as long as we can, and if the people who are orchestrating them want to make it so that we can ignore them, sometimes we're just too happy to do that.

On the story "All The Names For God," in which two girls kidnapped by Boko Haram find a way to control the minds of their captors

I was reading the news stories about the kidnapping of the Chibok school girls, and it was the one-year anniversary. And The New York Times had published a piece that said essentially, you know, "We in America have kind of forgotten about this, but most of these girls are still not home." And so it just really got me thinking about what would I want if that was my daughter or my sister, and of course, you would want those girls to come home. But there was some part of me that just really wanted some kind of power for them or payback for them, and that's where that one started.

I don't think so. I mean, I certainly don't intend it to trivialize the harrowing in any way, or the traumatic in any way. To me, it's a question of: OK, these awful things are happening all around us in the world everyday, and if you are only looking at them in a purely realistic way, I think sometimes, it becomes impossible to keep looking at them. They're too overwhelming, they're too terrible, and you feel helpless. Looking at them through a magical lens, for one thing, adds this element of surprise that I think pulls your attention back and makes you look at the issue in the face, and not give into that impulse to look away.

Connor Donevan and Melissa Gray produced and edited this interview for broadcast. Sydnee Monday adapted it for the Web.