Accessibility links
Parkland Shooting Survivor Discusses Newfound Activism To End Gun Violence In advance of the "March for Our Lives" rally in Washington, Gabe Glassman, a sophomore at Marjory Stoneman Douglas High, and his mother, Lisa Glassman, discuss how they've changed since the shooting. 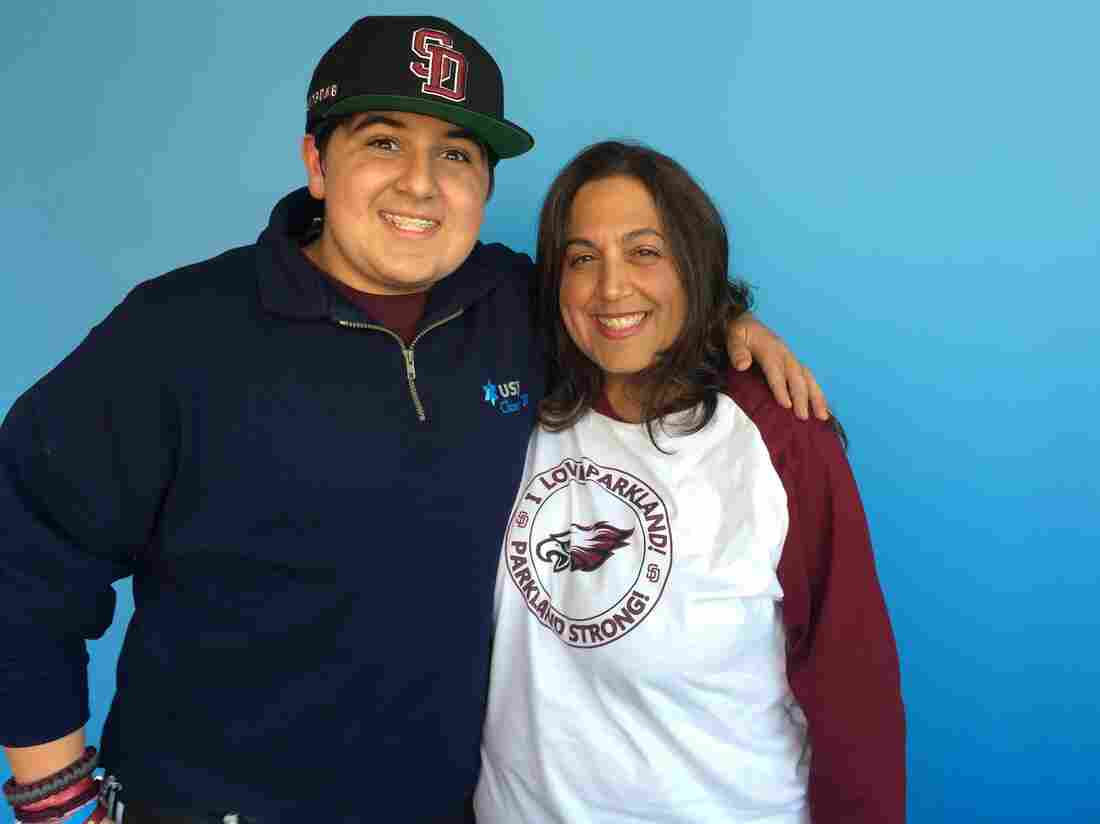 Gabe Glassman is a sophomore at Marjory Stoneman Douglas High School in Parkland, Fla. After the deadly shooting in February, he and his mother, Lisa, have become active in the gun control debate. Matt Ozug/NPR hide caption 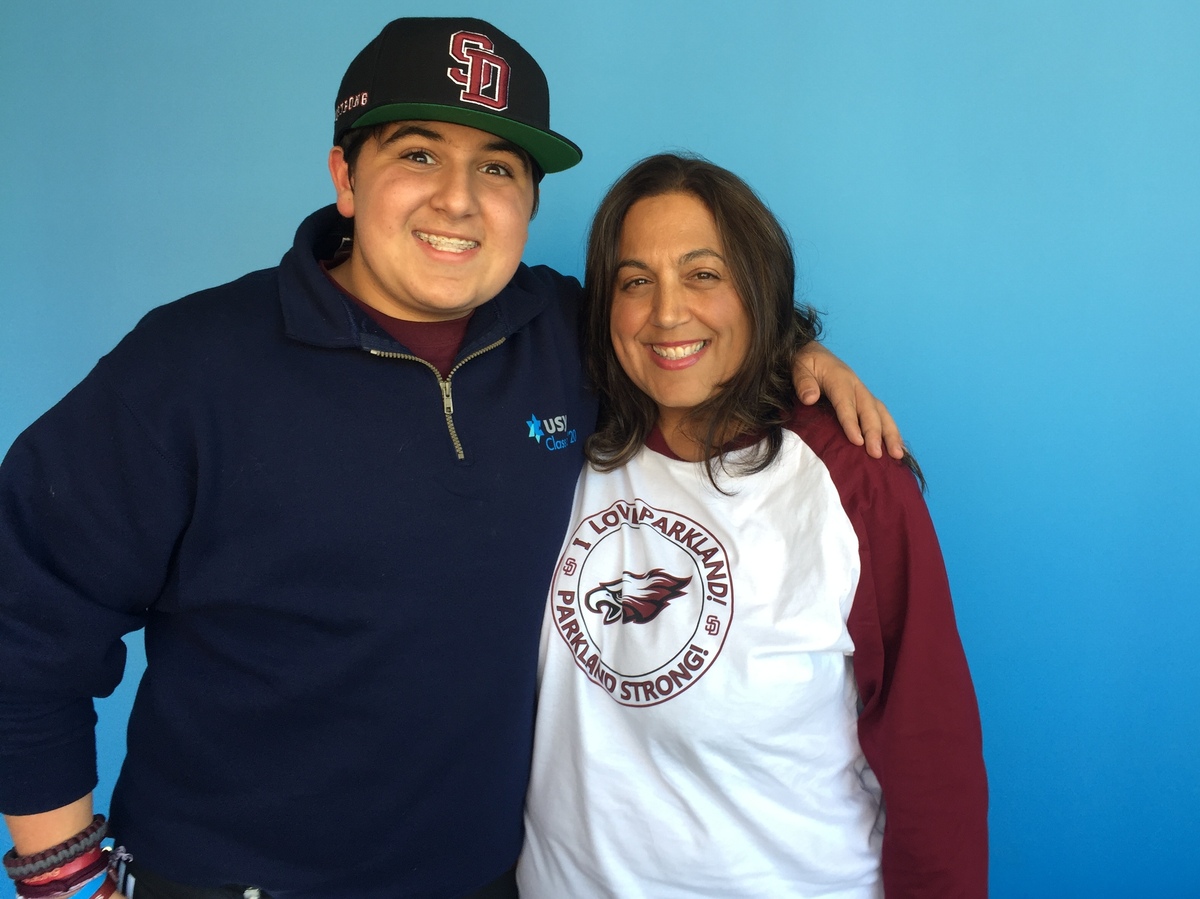 Gabe Glassman is a sophomore at Marjory Stoneman Douglas High School in Parkland, Fla. After the deadly shooting in February, he and his mother, Lisa, have become active in the gun control debate.

Many lives in the Parkland, Fla., community were transformed forever following the shooting at Marjory Stoneman Douglas High School that killed 17 people on Feb. 14.

Since then, survivors have found they have a powerful voice in the gun control debate and have been speaking up online, on television and even at the White House.

Sophomore Gabe Glassman has been working with Youth Radio to report on the impact of the shooting on his friends and family.

As Gabe prepared to go back to school, he talked a lot with his mother, Lisa Glassman. Now they're both in Washington, D.C., preparing for the "March for Our Lives" rally on Saturday.

It won't be Gabe's first political demonstration, but he does say it might be the "craziest."

"Over 800 marches around the world — it's just crazy how much support this topic in politics right now is getting," he says. "And really, I'm very proud of the students I go to school with because we started this conversation."

For Gabe, his mom is his "partner in crime," who he says has supported him from the very beginning.

"Her support gives me energy, so that's what keeps me running," Gabe says.

But as much as Lisa has supported her son, she does say it was difficult to watch him return to classes.

"Before this happened it was very easy; I was happy to get him off to school. And then saying goodbye to him reminded me of that fateful day — February 14th — when our lives changed forever," she says.

Gabe says it was hard to go back to school while processing so many emotions, but school officials made an effort to help.

"When we got to school, first responders were there, police officers were there greeting us at every entrance, making sure that we felt comfortable," he says.

Lisa adds that there were board games to "create conversation between the kids to get them talking about it and more comfortable."

But that doesn't mean school has returned to normal.

"When I first went back ... I just wanted to get back onto my schedule that I had before all this, but obviously there will never be a normal at this school," he says.

Gabe says all the students want "normal" school — and it will take time, but they will find the new normal.

"We're not just going to sit here and let this bother us for the rest of our lives; we're going to persevere," he says.

Before the shooting, Gabe says, he wasn't really a political person who would speak out about issues. In the aftermath, his newfound activism has helped him get through.

"If my mind was still on February 14th, I would still be an emotional wreck," he says. "But my mind was on activism and change."

Lisa says she and her husband have also seen a change in Gabe as he has found his voice in the movement.

"This is a young man that didn't speak until he was 3, and [we] really had to pull those words out of him," Lisa says. "The fact that he's now speaking at rallies and saying 'we need change now,' that voice has blossomed into something that is a force to be reckoned with."

And, she says, they are extremely proud of him.

"It's not easy to go into that school every day, and the other day when there was a threat and there was a bomb squad the night before you had to go to school, you showed no fear," she tells him. "We were definitely more fearful of letting you go that day, and you said 'I got things to do.' That was really just a moment that we realized you were growing up."

Gabe says he's not quite sure he wants to grow up, but he is grateful for his parents and the support they continue to give him.

"You guys inspire me every day to be the young adult that I am," he says. "You guys support me in literally everything I do, every single day, and in the midst of this entire thing is just incredible, and I love you. You guys are the greatest support group I could ever have."

The audio for this story was produced by Matt Ozug and All Things Considered intern Miguel Perez and edited by Bridget Kelley.