Accessibility links
You Don't Have To Be A Dog Person To Enjoy 'Tomorrow' Damian Dibben's novel follows a 217-year-old dog (yes, you read that right) as he searches for his wizardly master, who's disappeared somewhere in Europe in the middle of the Napoleonic Wars.

You Don't Have To Be A Dog Person To Enjoy 'Tomorrow'

You Don't Have To Be A Dog Person To Enjoy 'Tomorrow' 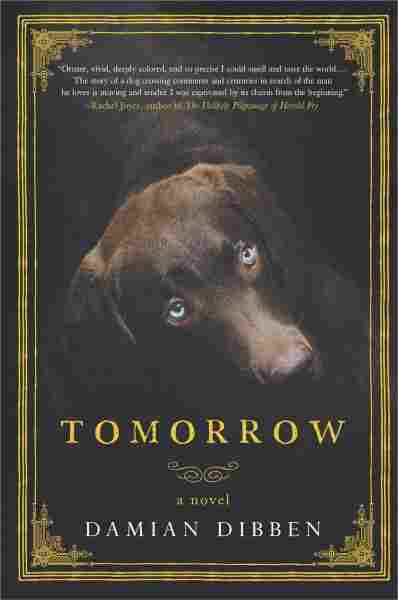 Odysseus loved his faithful hound Argos. Dorothy had her Toto. Helen Keller kept a pampered pit bull, Sir Thomas. But no canine, not even Hollywood superstars Lassie or Rin Tin Tin, can compete with Tomorrow, the hero (and narrator) of Tomorrow, the first adult novel by the prolific British children's book author Damian Dibben.

Barbara Bush's dog, Millie, wrote her own book a few years back, but Tomorrow has a leg up on any presidential pup, because he's the sidekick of a genius wizard named Valentyne. Adopted at four weeks old, Tomorrow is 217 at the time of the book's telling, and he'll live for centuries more — so in dog years, Tomorrow's been around for over a millennium. Time enough to learn more than a few new tricks.

That longevity is thanks to Tomorrow's master, the charismatic Valentyne, who has injected himself and his faithful companion with a compound called "jyhr" that keeps them both alive — all the way from the Middle Ages through Waterloo. It's a grand sweep of adventure and travel, war and romance — along with a generous amount of face licking — that will have dog lovers enthralled.

What observations would you expect to dominate the memoir of a pooch? Everything olfactory, of course. Tomorrow sees the world as a rainbow of scents. There is, above all, the recurring scent of Valentyne: "midnight in a tall forest, stiff parchment paper, a whisper of pine sap." Thus the incantatory metaphorical aroma of love.

But if Tomorrow is a tale of love, it's also a story of aching loss. For over a century, Tomorrow has been separated, Argos-style, from his beloved master, who was snatched away mysteriously in a Venice church. The dog recalls Valentyne's last admonition: "'If we lose one another, my champion,' — those were his last words to me — 'wait for me on the steps. Just here, by the door.'"

And Tomorrow obeys, but his master never returns. Like celebrated graveside mourners Greyfriars Bobby or Hachiko, the bereft creature, black with tan patches on his belly and at his brow, keeps vigil. He barely sleeps. And the reader feels the dog's yearning. "All those years waiting, the mulchy autumns and whetstone winters, the cathedral steps, wishing on the horizon, all my little spins of hope, dozens of them a day, which were dashed over and over. Yet still I hoped." He finds himself on the lam, which is especially difficult as he has "developed — not unusually for my species — a sense of proportion, quality and color."

Clearly, Dibben has created a different, fantastical world, in which one extraordinarily intelligent, sensitive, poetic dog sets himself apart from the pack, even refusing to consume meat. Tomorrow never knows, but he believes the villain, Vilder, has made off with Valentyne, and therefore Vilder must be followed. So he waits, searches and finally wanders the battlegrounds of Europe seeking his master, a quest that all told goes on for fully 127 years. Man's best friend, indeed.

... somehow, the homely practices of dogdom don't detract from the novel's elegant mystique.

But what of this jyrh and the mad scientist who created it? At one point, England's King James asks if Valentyne's potions are "the magic that witches use. To make storms from the air?" Kind, personable, brainy Valentyne responds that his work is "a science. A sound and logical art." Though he tells the king, "I am no magician," he has managed to distill the secret to life without end.

Other four-legged beasts play a part in Tomorrow's adventures. There is Sporco, a Venetian stray with golden fur in matted clumps and a clownish disposition, who acts as Sancho Panza to his more solemn friend's Don Quixote. Sporco jumps, tussles, wags — a real dog's dog. When an attractive bitch enters the picture, Dibben has Tomorow ruminate on her allure: "I took secret sniffs of air but couldn't place her aroma; there was some mystery to it: sandalwood, marula, jackalberry. And more: the shiver of balmy winds, warm-wet, south seas, palm, coconut and sugar cane."

In these pages you will find some characters doing it doggy style — literally — and plenty of snouts thrust into the hindquarters of strangers. But somehow, the homely practices of dogdom don't detract from the novel's elegant mystique. Tomorrow offers a rich exploration of love, life and loyalty, in a world whose sensory atmosphere is irresistible.