In Washington, D.C., for the "March For Our Lives," students from Parkland, Fla., visited Thurgood Marshall Academy to share experiences with local students and offer solutions to gun violence. 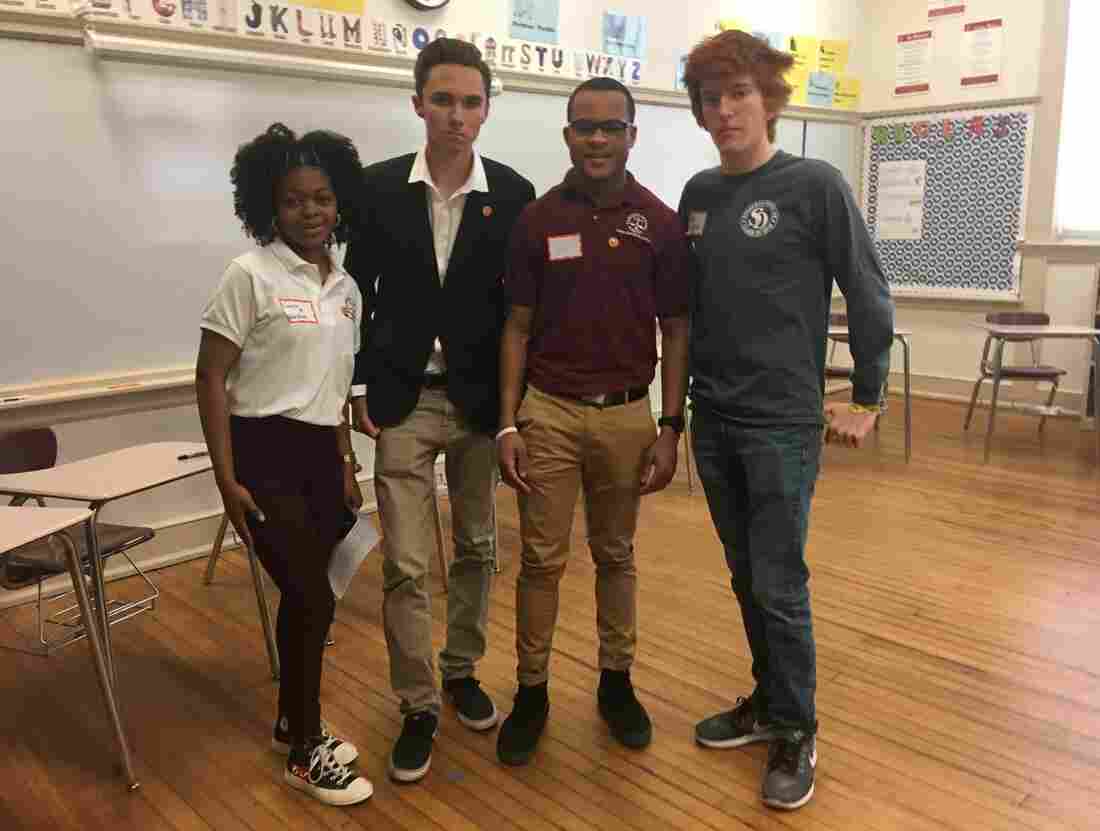 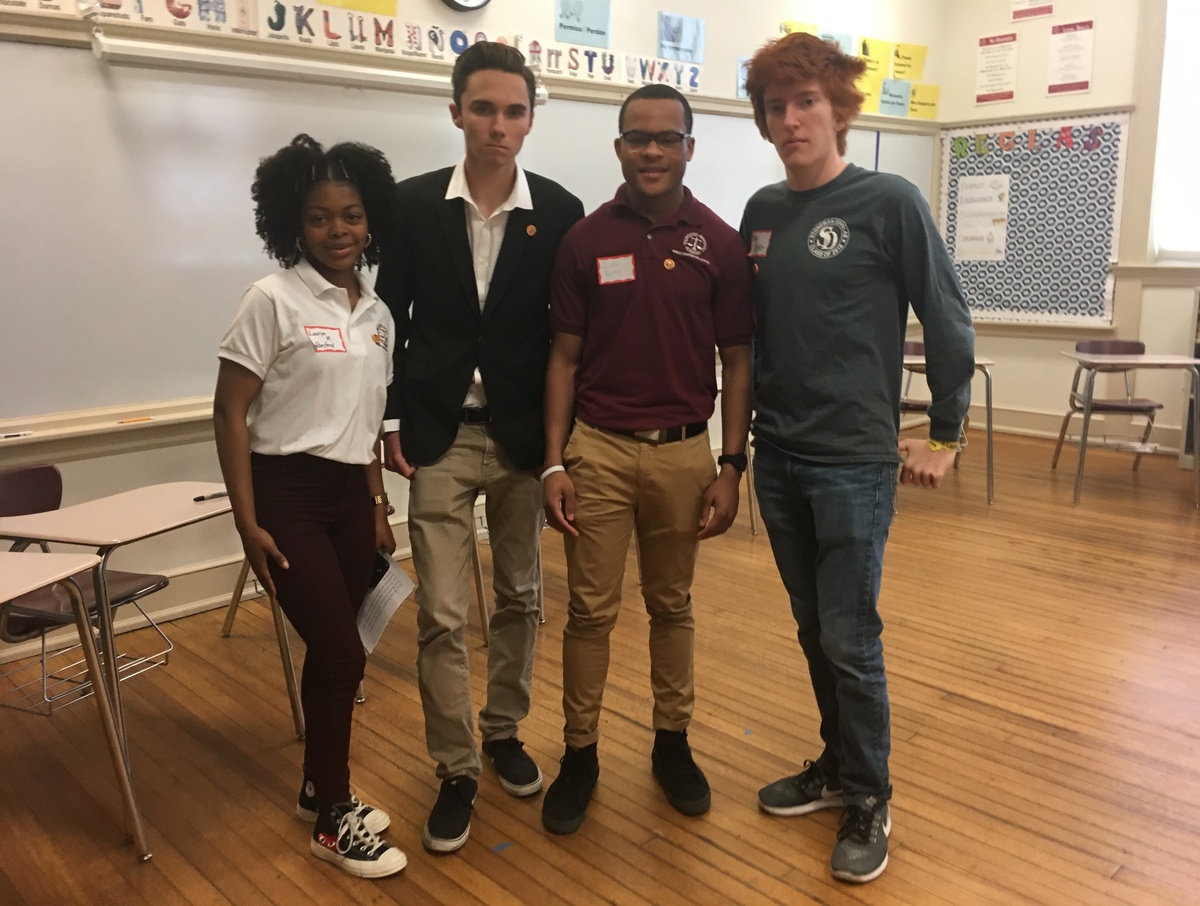 Earlier in the program, we heard about the March for our Lives in Washington, D.C., today to protest gun violence. That, of course, was spurred by the recent mass shooting at Marjory Stoneman Douglas High School in Parkland, Fla., where 17 people were killed last month. But there's another more pervasive form of gun violence that we don't talk about as often.

ZION KELLY: Well, on September 20 last year, there was a guy, you know, like with a gun just like lurking like on my streets just like preying on students and whoever walks down the street.

MCCAMMON: That's Zion Kelly. We talked to him on Thursday at his high school, Thurgood Marshall Academy in Southeast Washington, D.C. He and many of his classmates sat in desks arranged in a circle in a Spanish classroom, and they had some special visitors - students from Marjory Stoneman Douglas High School who had come to hear the Washington, D.C., kids' experiences with gun violence. Here's Zion again.

KELLY: So I walked home from school. And he attempted to rob me, but I ran.

MCCAMMON: Zion knew his twin brother Zaire was walking back from a college prep class, so he tried to call and warn him.

KELLY: He just like stopped responding and stuff. And so the guy was able to like try to rob him and shoot him, but my brother, he like fought back. And he had like a pocket knife on him. And he fought back. And, like, they both ended up dying.

MCCAMMON: The shooter had been released from jail just two weeks prior and was awaiting trial.

KELLY: We have very strict gun laws, but guns are coming in from states such as Virginia with very loose gun laws. And they're getting into the hands of the wrong people. That needs to stop because once a gun gets into the hand of the wrong person, someone else's life is affected.

MCCAMMON: Seventeen-year-old David Hogg sat nearby listening to Zion tell his story. He's one of the Parkland survivors who came to Washington to talk about how students with varying experiences with gun violence can work together. We were allowed to be in the room while the students talked to each other. Here's David.

DAVID HOGG: One other question I have for you guys is, in your community - 'cause in ours, we don't have much gun violence other than what happened at our school - what solutions have you guys seen that you think worked were either that were either taken away or are still here but you think need more funding, for example?

DESTANI NWANZE: I feel like we don't get funding. And the funding we do get is for the other side of the bridge. We don't see anything. It's a regular day thing. We don't see - yeah, we see police officers, but who's going to go to police officers when they're scared of getting shot by one?

MCCAMMON: That was Destani Nwanze. She's a student at Thurgood Marshall. Afterwards, I sat down with a smaller group - David Hogg and Ryan Deitsch from Parkland, and from D.C., Zion Kelly, who we heard from a moment ago, and Lauren Renford. She was dating Zion's brother when he was killed. I started by asking them what they hope to accomplish at the march.

KELLY: I'm hoping that our voices get, like, heard. And I'm - we're hoping for change in the long run, so.

HOGG: From what I learned here today, what's been proven to me even more so is I hope that every community is heard equally and that ours isn't heard more just because of our race and our privilege. But every single community and every single person realizes that we are all Americans regardless of your race, color, skin, religion, class or creed. We all have the same suffering that we've lived through.

MCCAMMON: Lauren and Zion, I want to ask you, you know, as you hear all the activism that's come from Parkland, you know, we've talked here today about the fact that your community is affected by gun violence as well. Does it feel relevant? Does it feel like those issues are connected?

LAUREN RENFORD: I think they are, all by gun control and gun trafficking. And guns are the factor that connect us all. And it's very inspiring that they're here.

MCCAMMON: I mean, mass shootings like Parkland, understandably, get a lot of attention, but what does gun violence look like here?

KELLY: Gun violence, it looks like walking up stairs and seeing, like, police outside your house or hearing gunshots or hearing that your brother is dead because someone with a gun killed them.

MCCAMMON: Zion, you're saying these are things that have happened to you, right?

KELLY: These are things that only happened to me, so imagine what the community goes through.

HOGG: From my perspective, on a bigger scale, what a lot of this problem resides around is people treat communities like this and gun violence like something that is expected to happen and that it's just always going to happen. But what about every one of those individuals that died, all the other ones that die every day and don't get the same media attention because it's not a school shooting, because they aren't white, because they aren't privileged? The one thing that all of us have in common, sadly, we have been affected by gun violence - by guns. And we've all suffered as a result.

MCCAMMON: I mean, we've - we know that gun violence happens in this area. A couple of students - right? - have been killed in the last many months. When it happened to someone that was close to you, Lauren, how did you - what did you make of that?

RENFORD: It's funny because - or it's ironic how we don't advocate for change until someone we know or when we're personally touched. I think that's an issue because we lack community. And any death in our community should affect us whether we knew them or not.

MCCAMMON: David and Ryan, I'm curious, with you - if you would echo that, I mean, given you weren't touched by this - right? - until just recently. So how did that change the way you think about it?

HOGG: For me, I debated stuff about universal background checks and the constitutionality of unreasonable searches and seizures by SROs in schools...

HOGG: ...For the past four years. And I knew about this stuff. My mom has worked in very poor communities before. And I've known that this stuff was happening, but I didn't stand up and take action and as such and as many Americans still don't to this day. I think we're all complicit in the deaths of these children and the deaths of our future as a result. And now has to be the time, regardless of whether or not you've been affected, people need to realize that if they don't take action now, they can and they will be affected.