Thousands Expected To Rally For Gun Control, Many For The First Time

Thousands Expected To Rally For Gun Control, Many For The First Time 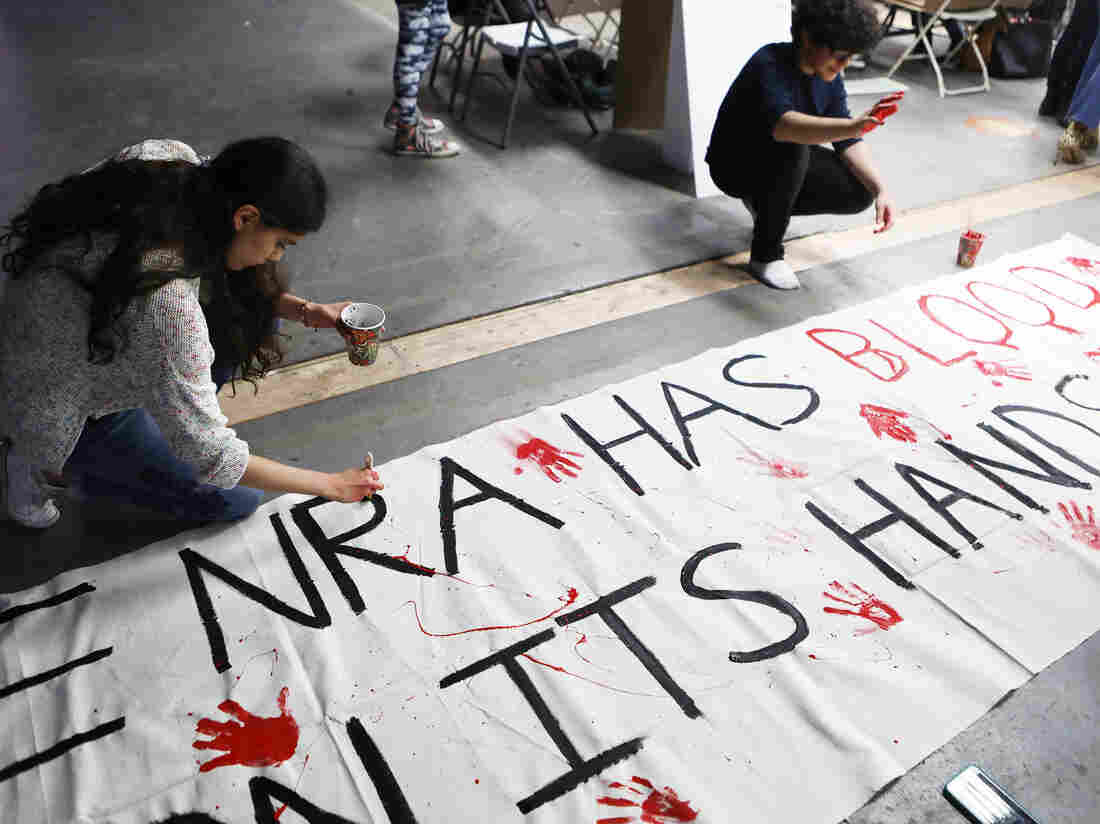 Young activists paint signs on March 22 to be carried at the "March For Our Lives" in Los Angeles. More than 500,000 are expected to march for gun control at rallies nationwide on March 24. Mario Tama/Getty Images hide caption 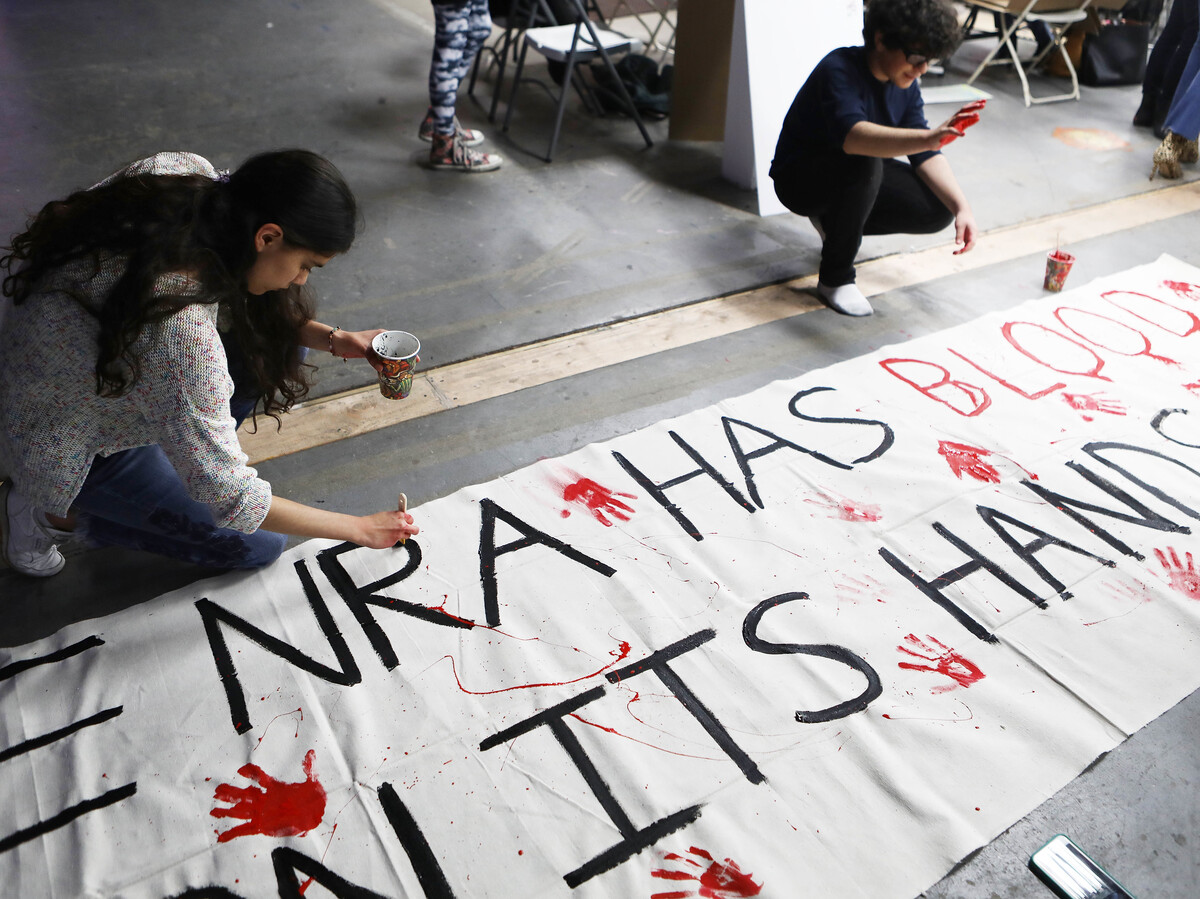 Young activists paint signs on March 22 to be carried at the "March For Our Lives" in Los Angeles. More than 500,000 are expected to march for gun control at rallies nationwide on March 24.

Marchers around the world will call for stricter gun control laws Saturday, including many who are demonstrating for a cause for the first time.

More than 500,000 are expected in Washington, D.C., alone, site of the main "March For Our Lives." There are at least 837 other events happening internationally, according to the event's official website.

The event was organized by students after 17 people were killed in a mass shooting at Marjory Stoneman Douglas High School in Parkland, Fla. last month.

Survivors of the Feb. 14 tragedy have pushed for state and national gun legislation after 19-year-old gunman Nikolas Cruz used a military-style rifle that he purchased legally, after passing background check, in the attack.

Parkland Survivor On 'March For Our Lives'

Parkland Survivor On 'March For Our Lives'

Stoneman Douglas student and march organizer Cameron Kasky, 17, told NPR's Morning Edition that he believes stricter gun regulation would benefit everyone, including those who own guns for recreation.

"We're marching to protect you from other people like you who have guns," he said. "And I say that target shooting, while it is a sport, we've become the targets ... we're running away from people like you."

'We Should Have Been The Last': Kentucky Shooting Survivors Inspired By Parkland

The Stoneman Douglas students have prompted activism across the country through social media campaigns and other media interviews. In a coordinated school walkout on March 14, thousands of students left their classrooms for 17 minutes to remember the 17 victims of the Parkland shooting.

The efforts and enthusiasm of the young people inspired Indianapolis resident Dwight Huffman enough to march for the first time in his life.

Huffman, who jokingly described himself as "a 54-year-old white guy," said that while people have fought about this issue again and again, it feels like "there's traction this time."

Huffman said he's in the middle on the issue. He's not a Democrat or a Republican. He's not a gun owner, but he also doesn't want to abolish the Second Amendment. He believes those who want sensible gun legislation outnumber those on either extreme of the gun debate. He says he's attending the march in Indianapolis to increase the head count.

"If others like me who've never done it before ... just show up, something might get done," he said.

Some hope that Saturday's marches will bring people together on the gun issue.

Anahii Jimenez, 17, has been spearheading the March For Our Lives in Boise, Idaho. She's met many people, including a lot of first-time marchers. People ask her what to do, saying to her again and again, "I've never done this before."

She's met a lot of people who, like Kasky and his classmates in Parkland, are survivors are gun violence and plan to attend. But she said a lot of gun owners are attending, too.

Kasky told NPR that the key is getting everyone on the same page.

"If we can all agree on what we're trying to march for, people are going to come and march," he said. "People believe in an assault weapons ban. People believe in universal background checks."

On the other side of the country, veteran marcher Roi Solberg, 78, said it comes down to the kids.

"It's guns versus kids," she said.

And Kasky said that's inevitably what will get people out on the streets.

"These people are marching not because we were able to sway them into marching," he said. "They are marching because our lives depend on it."

Solberg, who is a writer in California, says there is something different about this time around.

She has attended marches across the country for years, including a couple in D.C. and has been impressed by what she's heard from students over the past few weeks. She said that while she's felt change was possible with other demonstrations, she never felt that was true "as intensely as I do with this group" of students.

She's attending a march in San Jose, Calif., with 5 or 6 friends.

Jonar Arpon, 29, is also demonstrating in California - but he'll be marching upstream.

Arpon, like a handful of groups across the U.S., will march in support of gun rights.

On A Day Of Gun Protest, Some Montanans Will March For Their Guns

Arpon, who will be in Long Beach, Calif., says used to fighting against the current as a millennial, Filipino Trump supporter in California. He said he understands the gun control argument, but his concerns for the safety of his 9- and 10-year-old children drive his argument to arm schools. He said that gunmen need to know they face a risk when they enter a school to shoot innocent kids.

"When things get tough, you've got to get tough as well," Arpon said. "You can't keep hoping for bad people to change."