Accessibility links
More States Move To End 'Tampon Tax' That's Seen As Discriminating Against Women In many states, menstrual products are subject to a sales tax whereas items like ChapStick are not. It's just one example of women paying a premium, known as the "pink tax," for various products. 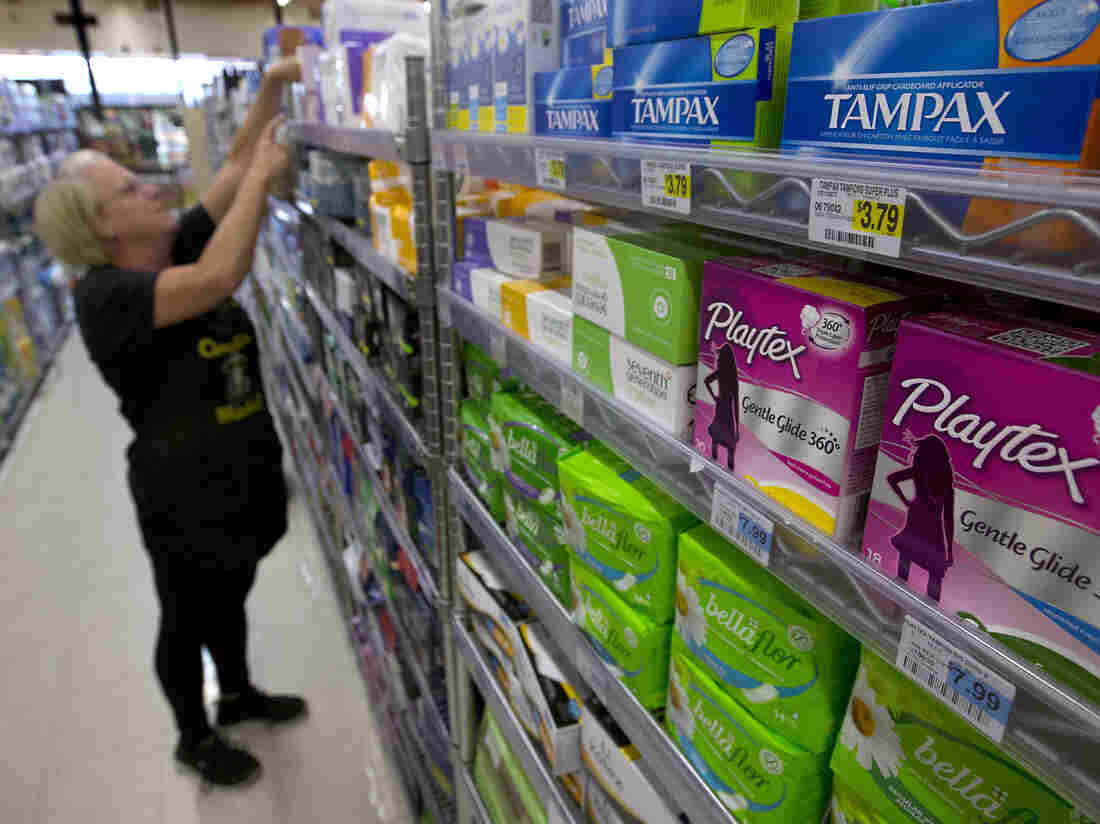 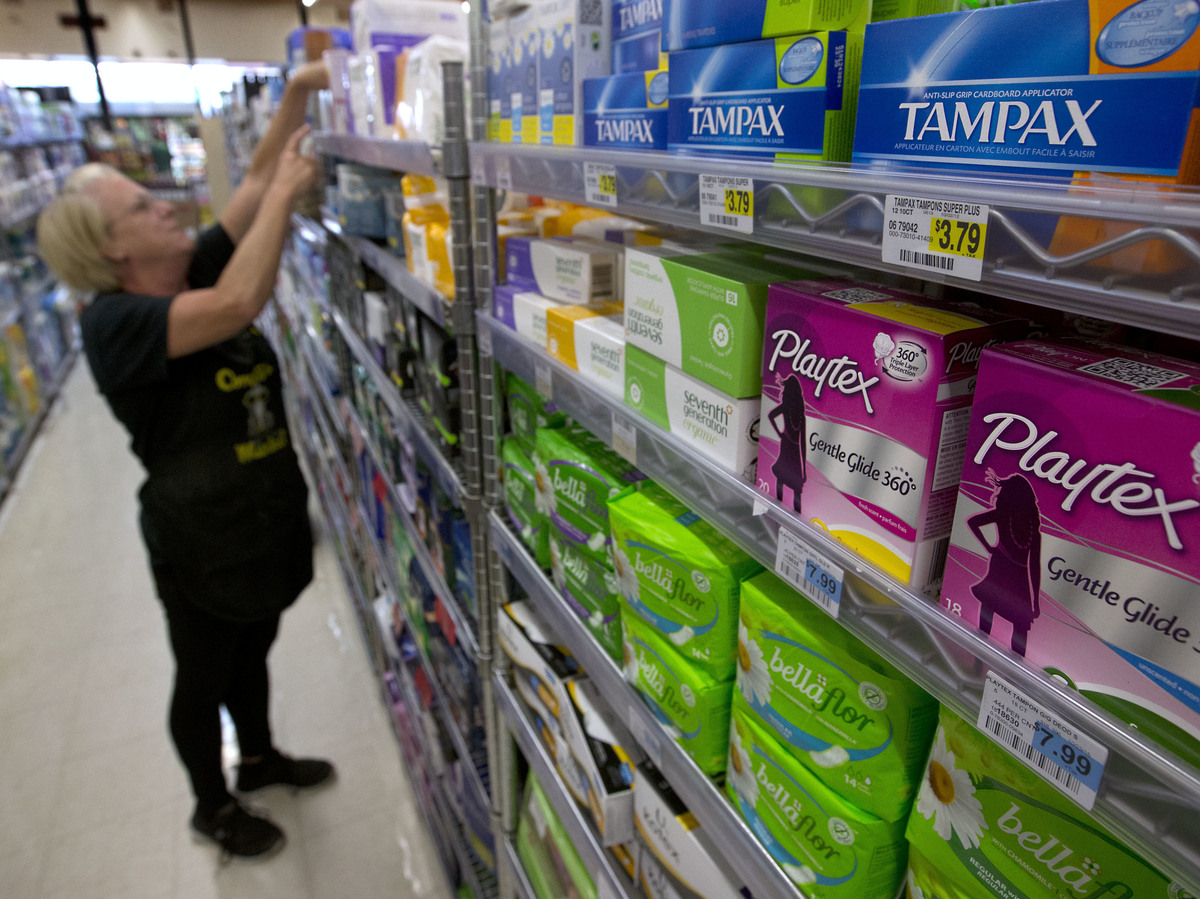 ChapStick, Viagra and dandruff shampoo. These are just three of the thousands of health and personal care items that are exempt from sales tax in many U.S. states. Notably missing from that list: menstrual products.

So far, nine states have exempted menstrual products from their sales tax, and seven have introduced legislation aimed at doing the same. Three of the seven — Nebraska, Virginia and Arizona — introduced their legislation this year.

In her recently published book, Periods Gone Public, Jennifer Weiss-Wolf chronicles what she calls a lack of "period equity." Managing menstruation "is a critical aspect of the lives and civic participation of more than half the population," and should be considered when making policy, she writes.

A large part of her advocacy has focused on fighting against what's known as the "tampon tax." It's just one example of women paying a premium for various products, a phenomenon known as the "pink tax."

While there is no specific tax on tampons, in states that don't tax medical and health supplies, tampons are excluded from those tax-exempt categories. Hence the term "tampon tax."

According to Weiss-Wolf, the tampon tax was a natural starting place for her advocacy. She began working on the issue of period equity at the beginning of 2015, and the following year she teamed up with Laura Strausfeld, a lawyer looking to combat the tampon tax. Together they formed the aptly named Period Equity, an organization that works on legal cases and legislation across the country meant to combat the tampon tax.

Period Equity's most recent undertaking was a public service ad starring celebrity Amber Rose, which was released on YouTube. Rose, clad in a provocative black dress, carefully strokes a diamond pendent and opens the charm to reveal a single tampon. "Where else would you keep something 36 states tax as a luxury?" the voice-over asks in an unabashed tone.

At least one company has taken on this issue head on. Boxed, an online bulk shopping company, introduced its #RethinkPink initiative, offering a discount on menstrual products to offset states sales taxes.

Of course, the company stands to gain customers from this initiative. If more women choose to shop with Boxed because of the discounts, they end up buying other goods on its website, making up for the initial loss in revenue.

Nitasha Mehta is the head of vendor marketing for the company and lobbies around the country, including Nevada and Ohio, where she testified in support of anti-tampon-tax bills. "There is a trend starting to occur," she says.

In Ohio, state Rep. Brigid Kelly, a Democrat, recently earned a major win for the legislation in a Republican-dominated statehouse. Her bill, which would exempt feminine hygiene products from the state sales tax, was introduced in February 2017 and was given a second hearing last fall.

"We were so happy," she says. "This is a very simple practical thing that we can do in order to make necessary medical products more accessible to women in our community."

Kelly says she received help from lawmakers in other states, including New York and California, that dealt with similar legislation. One main talking point among many of these fights across the country is how much of an impact this change could make for low-income women.

"The sales tax on these items does not amount to much," Kelly says. "But when you're trying to figure out if you can give your kid milk money or if you have enough to get your own lunch then it is impactful in a very significant way."

She acknowledges it's not a comfortable topic for discussion with her male colleagues. Kelly says they've been professional, but "it's definitely not something they are eager to discuss over the lunch table"

In some states the bill was circulated but not passed or signed. California Gov. Jerry Brown refused to sign the measure on the grounds that the state couldn't afford to lose revenue. In her new book about period equity, Weiss-Wolf estimates the revenue from menstrual products can range from "$1 million in Utah to $20 million in California."

Talking About Periods in Public

"A lot of times they don't want to pass it because it's a budget issue ... they're in debt," Boxed's Mehta says. But, she says, "ultimately by saving women money on these items hopefully they will spend it on other items and have more disposable income."

In Nevada, a version passed last year is awaiting approval by the state's voters in a referendum scheduled for this November.

Similar legislation was introduced last year in Wisconsin, where it is awaiting a hearing. And so far in 2018, three more states have introduced anti-tampon tax legislation: Nebraska, Virginia and Arizona. In the latest attempt to pass the measure in Utah, the bill died in committee earlier this year.

"The tampon tax is an obvious example of unfair gender discrimination," says Virginia Delegate Kaye Kory, a Democrat. "It doesn't make sense." Kory's bill to end the tampon tax did not get a hearing in the legislative session that ended this month, but she plans to reintroduce it.

There is another seemingly unfair "tax" targeted at women: the pink tax. It's actually not a tax at all, but a charge tacked onto many women's products.

A 2015 study by the New York Department of Consumer Affairs compared nearly 800 retail items from over 90 brands ranging from children's toys to deodorant, specifically in search of potential gendered pricing.

For any given product, the "women's" version costs an average of 7 percent more than similar products for men, the study found. Of the 35 product categories tested, only five did not price higher for the women's version. Personal care products topped the list at an average of 13 percent more for women. Even something as universal as a bike helmet at Target cost $14.99 with sharks on it and $27.99 with unicorns on it, according to the 2015 study.

Some industry officials push back against these claims.

But other advocates say this is a misguided approach to advertising women's products, and may be due to women's underrepresentation in the advertising field. Although women have been a part of advertising since its conception, The New York Times reported that only 11 percent of creative directors are women.

One example of this would be the old advertising strategy "shrink it and pink it." This phrase refers to the popular marketing strategy of taking a men's or gender-neutral product, reducing the size of the packaging, and turning the bottle pink to target women, and then charging the same price or more than the comparable product. Although this idea may seem arcane, there is evidence to suggest some manufactures are still doing it.

And this discriminatory pricing also applies to services, advocates say.

"I find it offensive," says Rep. Jackie Speier, D-Calif., who has a long history of standing up for women's economic rights.

In 1995, Speier, a state representative in California at the time, led the historic successful push in the state to outlaw discriminatory pricing for haircuts, dry cleaning, car repairs and other services based on gender. Now she aims to do the same at the federal level, with a bill tentatively titled the Pink Tax Repeal Act. This bill, which she plans to introduce in the U.S. House later this year, will aim to restrict discriminatory pricing of services as well as goods.

She says many of her colleagues in the House didn't know such a disparity exists. "People are just astonished," she says.

Passing the legislation in the current political climate will be difficult, she concedes. But if it passes, she says, the bill would provide wide-reaching authority to combat the pink tax. "It allows the state attorneys general to bring civil actions on behalf of the residents of the state to compel compliance," in addition to the standard enforcement abilities of the Federal Trade Commission, she says.