Accessibility links
Remembering 1968: LBJ Surprises Nation With Announcement He Won't Seek Re-Election That night, history arrived without much of a warning. Johnson's speech delivered such a shock that some who first heard the news the following day thought it had to be an April Fools' joke. 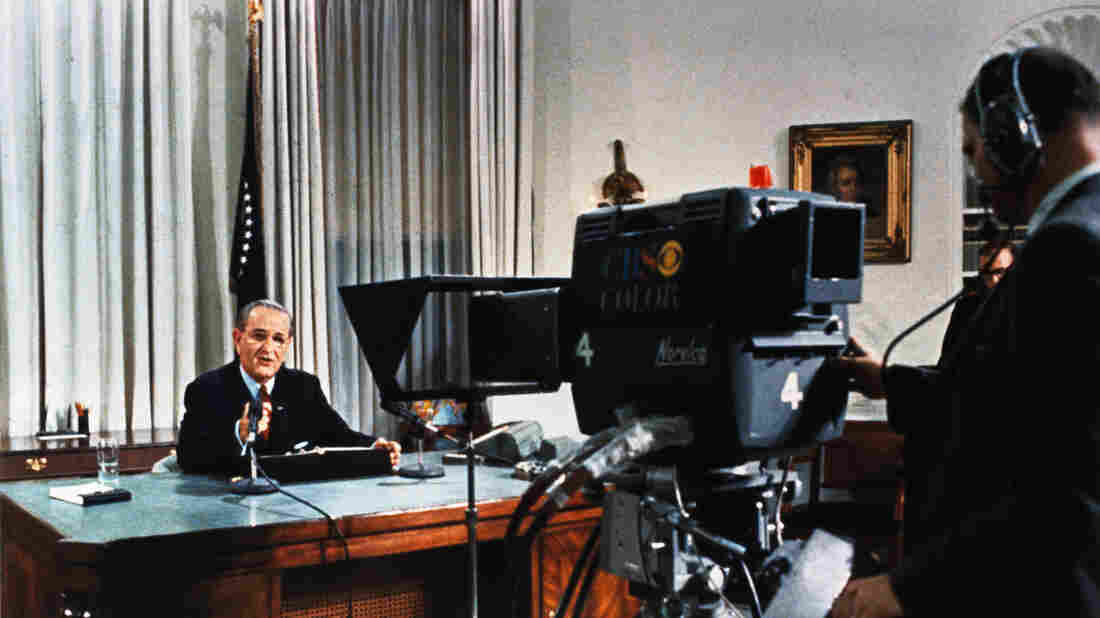 President Lyndon B. Johnson is shown during his nationwide television broadcast from the White House on March 31, 1968. Bettmann/Bettmann Archive hide caption 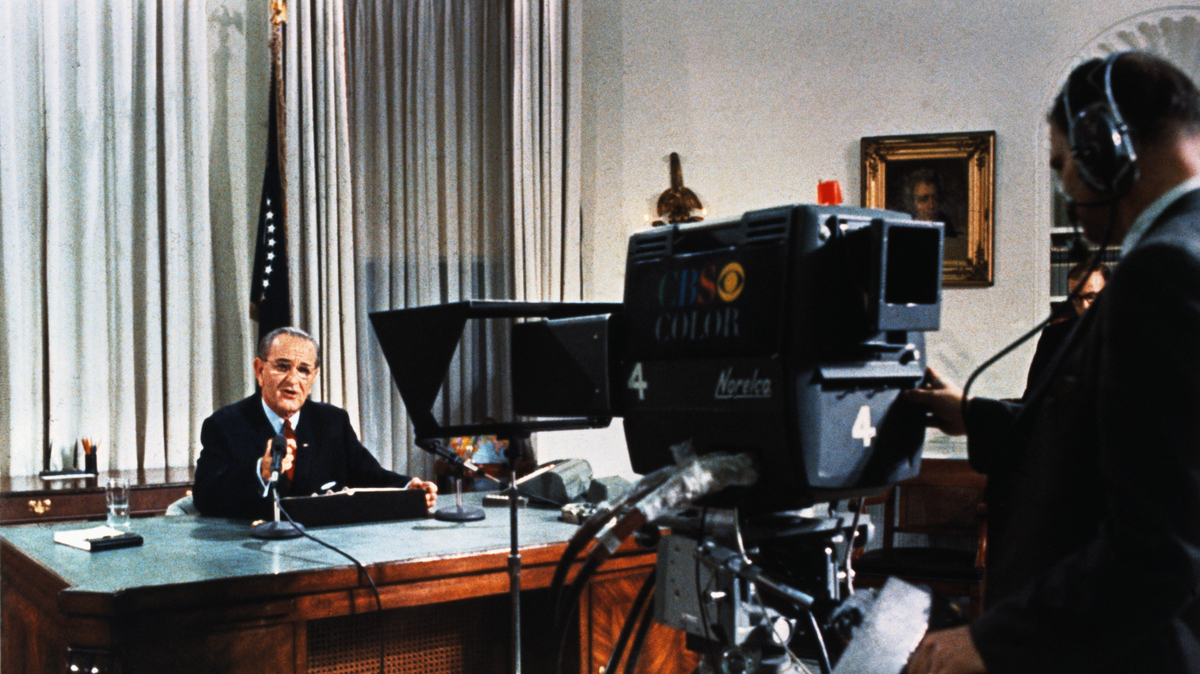 President Lyndon B. Johnson is shown during his nationwide television broadcast from the White House on March 31, 1968.

Much of the history of 1968 we recall now is relived through the TV coverage Americans watched at the time. But one particular moment from March of that year was a TV event by definition.

It was the last evening of the month, a Sunday, and much of the nation sat down to watch its favorite prime-time shows. But on this night, they found their regular programming had been pre-empted for a speech by the president of the United States.

The networks had been told it would be a speech about Vietnam, the Southeast Asian nation where war had raged for years and escalated into a crisis that would define the era. Indeed, on that night, President Lyndon B. Johnson would devote nearly 40 minutes to talking about it.

He spoke of a pause in the massive bombing campaign that was devastating much of communist North Vietnam and portions of embattled South Vietnam, where the U.S. was defending an anti-communist regime.

Johnson's speech was his most earnest plea yet to be taken seriously as a peacemaker. He meant that plea to be validated by the closing statement he had chosen to include that night. Instead, that statement caught the nation by surprise, shattered the political landscape and utterly overshadowed the rest of the speech.

"With America's sons in the fields far away, with America's future under challenge right here at home, with our hopes and the world's hopes for peace in the balance every day, I do not believe that I should devote an hour or a day of my time to any personal partisan causes or to any duties other than the awesome duties of this office — the presidency of this country," Johnson intoned, looking earnestly into the camera lens.

Tens of millions of viewers suddenly came to full attention. What did he just say? What could that mean?

"Accordingly, I shall not seek, and I will not accept, the nomination of my party for another term as your president."

With that, the man who won a landslide of epic proportions in 1964 stepped away from the office and the destiny he had spent his life pursuing.

Johnson's speech that night delivered such a shock to the nation that some who first heard the news the following day thought it had to be an April Fools' joke. Everyone who knew anything about the president knew how much he cared about being president.

It seemed more likely that the war itself would suddenly cease than that the larger-than-life Texan in the White House would run up a personal white flag.

It was not like the Washington, D.C., or the White House of today, when scarcely any development happens without days of foreshadowing in news leaks and on Twitter.

On this occasion, at least, history arrived without warning. LBJ had told his speechwriter, of course, and a typist who saw the draft. He had told his daughters and his wife, Lady Bird, and a handful of his closest aides. But all of these intimates had heard him muse about retirement for years. They had no special reason to believe him this time.

He had met with Vice President Hubert Humphrey, showing him two copies of the text that Sunday morning. One had the announcement, one did not. He did not commit to either at the time.

40 Years Ago, LBJ Opts Not to Run, Stunning Nation

40 Years Ago, LBJ Opts Not to Run, Stunning Nation

It was a final indicator of his ambivalence, which was showing even as he edited the speech while rehearsing it for the cameras in the Oval Office that evening. Some of this rehearsal was captured by CBS producer John McDonough, who shared it 40 years later in a segment on NPR.

LBJ can be heard in the segment, returning to sentences he had decided to alter. He did not rehearse the ending, leaving his options open to the final minute.

Later, as he delivered the live version, White House aides were calling members of his Cabinet to make sure they were watching and knew what was coming.

But few others knew, even as the speech neared its end. Those in the dark included the news anchors and commentators who had no advance text and heard the president's words just before he signed off.

Typical were the reactions of Roger Mudd and Dan Rather who were covering the speech live for CBS and found themselves at a loss for words.

"What I'd rather do," said Mudd, "is go home and come back tomorrow morning and begin to talk about it."

If the professionals felt that way, the nation as a whole was at least as flummoxed. If there was one thing Johnson had established in four decades in Washington it was his relentless interest in being in power.

But what the country could not have known at the time was that LBJ had been agonizing over this decision for more than six months. A series of health problems — gallbladder and kidney stone surgeries, a serious respiratory infection, heart issues — had plagued the president in 1967.

In the fall of that year, he sat with his most trusted intimates to re-assess the re-election campaign everyone assumed he would conduct. Two were told to draft a withdrawal statement for a national party dinner in October, and again for a political function in December. The notion returned as part of the planning for the State of the Union Address in January 1968.

Each time, Johnson considered the statement and discarded it.

Then came the Tet Offensive, the enormous effort by North Vietnamese troops and communist guerrillas to seize key targets in South Vietnam. Throughout the month of February, major cities in the South were battle zones. Even the U.S. Embassy in Saigon was attacked and briefly held by the enemy.

Although the offensive failed with great loss of life for the communist forces, the impression left in the U.S. was of the enemy's strength and resilience. The war seemed more futile than ever. Johnson's approval rating fell into the mid-30s, the approval for his handling of Vietnam even lower.

Days later, New York Sen. Robert F. Kennedy had joined McCarthy in challenging the president's renomination. Kennedy, younger brother of the president whose assassination initially had put Johnson to the Oval Office, was now in the race.

But whatever Johnson thought his chances were of winning another term, by late March he had become obsessed with ending the war in Vietnam.

Robert Dallek, the historian and Johnson biographer, wrote that LBJ "wanted to end the war in 1968 without regard for domestic political considerations.

"The issue now, as he saw it, was the historical reputation of his five-year administration."

For a time immediately after the March 31 announcement, LBJ seemed to be succeeding in this last ambition. Media reaction to his sacrifice was overwhelmingly positive. The Washington Post, which had been savaging his war policy, praised his "personal sacrifice in the name of national unity" and wished him "a very special place in the annals of American history..."

Even those who saw him as still scheming, still hoping for a draft at the nominating convention, had to respect the size of Johnson's gesture. He had new leverage in dealing with a recalcitrant Congress on a tax increase, a bill banning discrimination in housing and a spending increase for his signature Great Society programs.

Johnson gave a bravura performance at the annual White House Correspondents Dinner, ruthlessly poking fun at himself and at his critics. He joked that while he had pledged not to seek the nomination of "my party," he might still be willing to talk to the Republicans. The line got a big laugh.

But the relentless narrative of 1968 would turn tragic again and again. Martin Luther King Jr. was assassinated in Memphis the week after Johnson's withdrawal speech. Two months later, Robert Kennedy was fatally shot the night he won the California primary (and with it, quite possibly, the Democratic nomination).

The convention itself in August would become a street riot, with Chicago police officers beating the youthful antiwar demonstrators they had been called in to control. The delegates inside the convention hall would nominate Humphrey for president, and the vice president would lose in November to Republican Richard Nixon.

In retirement the following year, Johnson saw his health continue to deteriorate as he watched the war he could not stop continue to cost lives. He lived through all of Nixon's first term and landslide re-election, dying the same week Nixon took the oath a second time. Although most American troops had left Vietnam by that time, the war would not end until the final North Vietnamese victory in 1975.