Accessibility links
Parkland Student: March Was 'Just The Start' Sam Zeif, like other Marjory Stoneman Douglas students, has become a familiar face on Twitter and on television since a gunman killed 17 of his classmates and teachers last month. 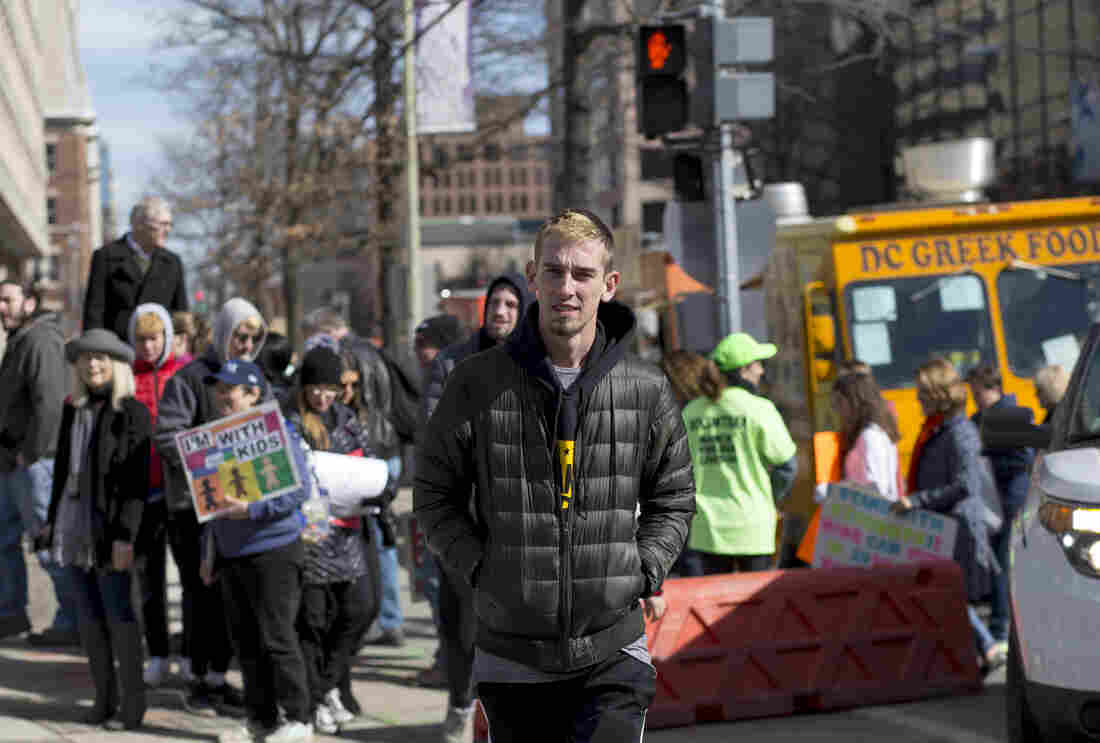 Sam Zeif heads to the "March for Our Lives" in Washington, D.C., on Saturday. Eslah Attar/NPR hide caption 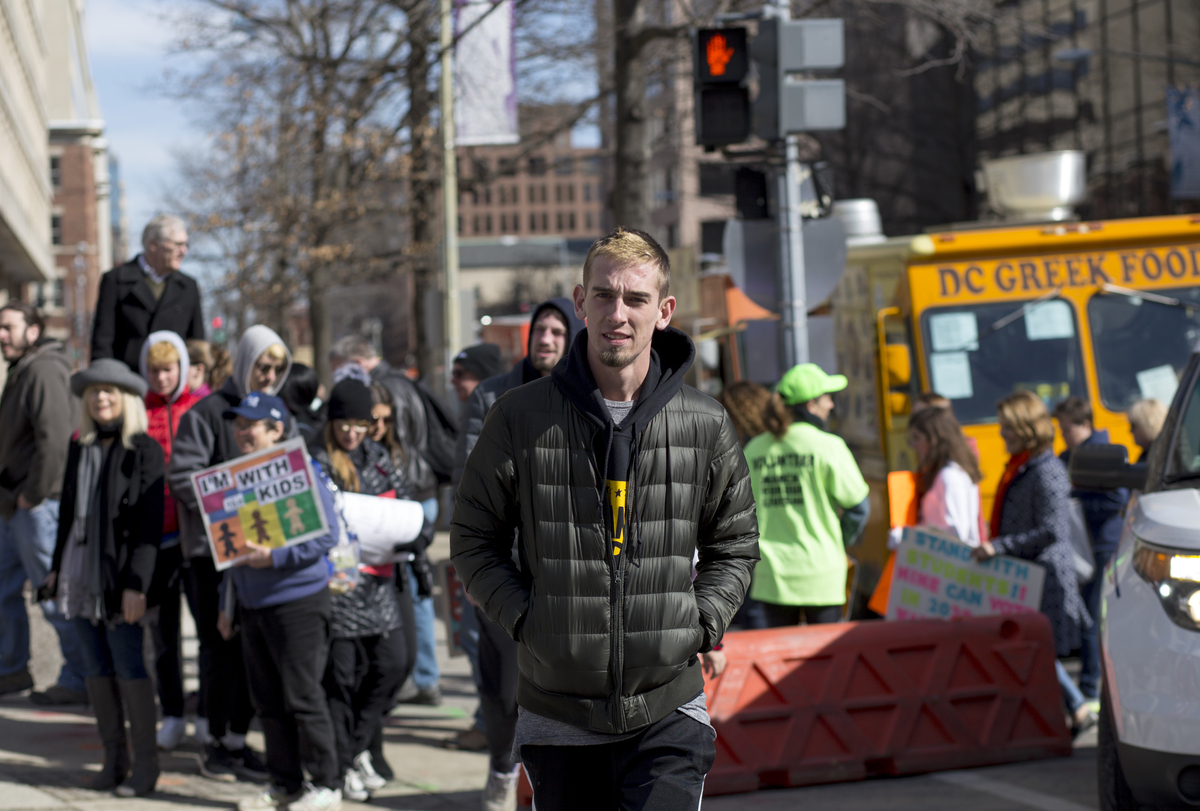 Sam Zeif heads to the "March for Our Lives" in Washington, D.C., on Saturday.

The night before one of the biggest rallies in Washington, D.C., history, Sam Zeif is beat.

It's been a long day. It started with an early-morning hit on CNN, then another with ABC's Good Morning America, followed by an afternoon trip to MSNBC — not for the first time. Just two days earlier, he was in Los Angeles, filming a segment with Ellen DeGeneres.

Zeif, like a handful of other Marjory Stoneman Douglas students, has become a familiar face on Twitter and on television since a gunman killed 17 of his Parkland, Fla., classmates and teachers in February. The next day, he would sit on the stage of the "March for Our Lives," which attracted hundreds of thousands in Washington, D.C., and around the world. 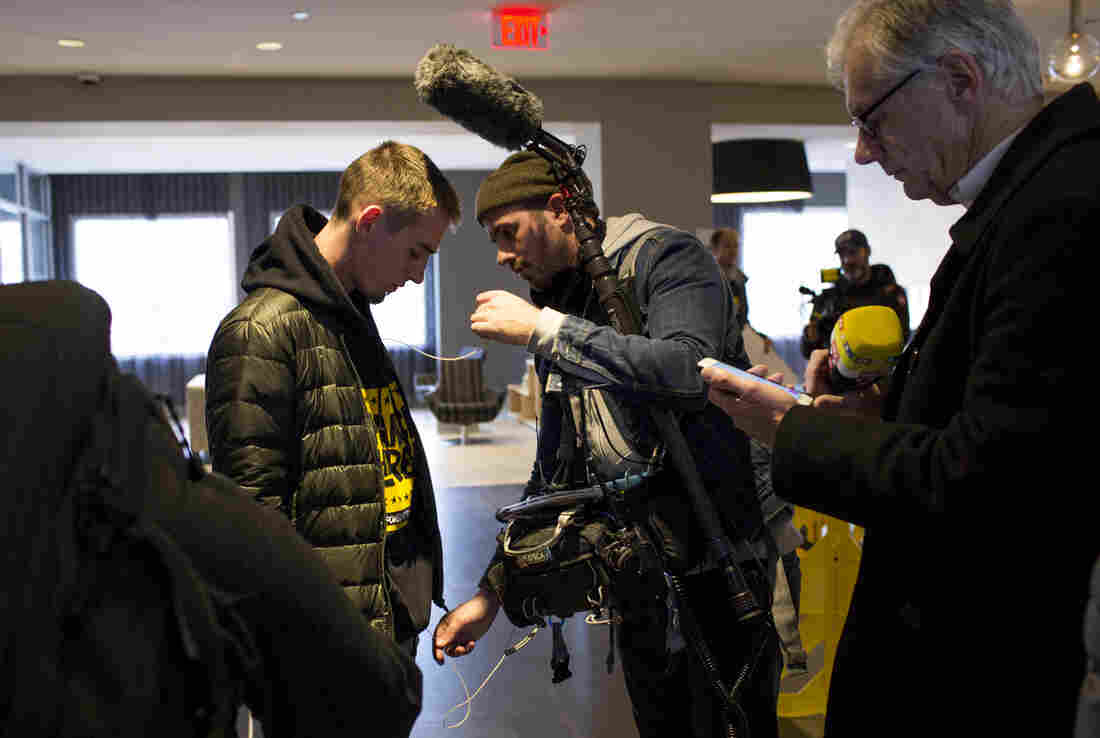 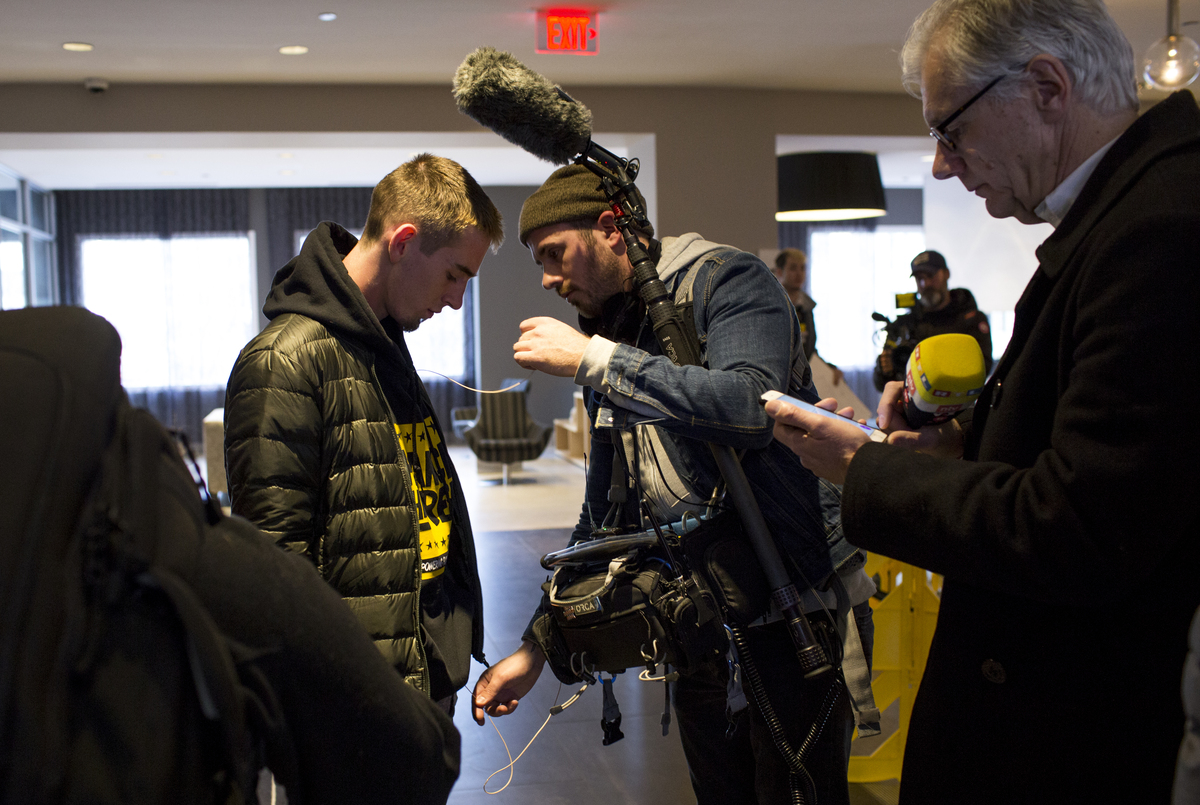 A camera crew member readies Zeif's microphone before his interview.

He and his classmates have had a lot of long days like this one since the shooting. Their stories are fueling a renewed push for stricter gun regulation. And they say that activism won't end with Saturday's march.

At a White House listening session hosted by President Trump one week after the shooting, Zeif cried on live TV as he put his hand on the shoulder of the Sandy Hook mom seated beside him.

"How did we not stop this after Columbine, after Sandy Hook?" Zeif asked the president. "I'm sitting with a mother that lost her son, and it's still happening." 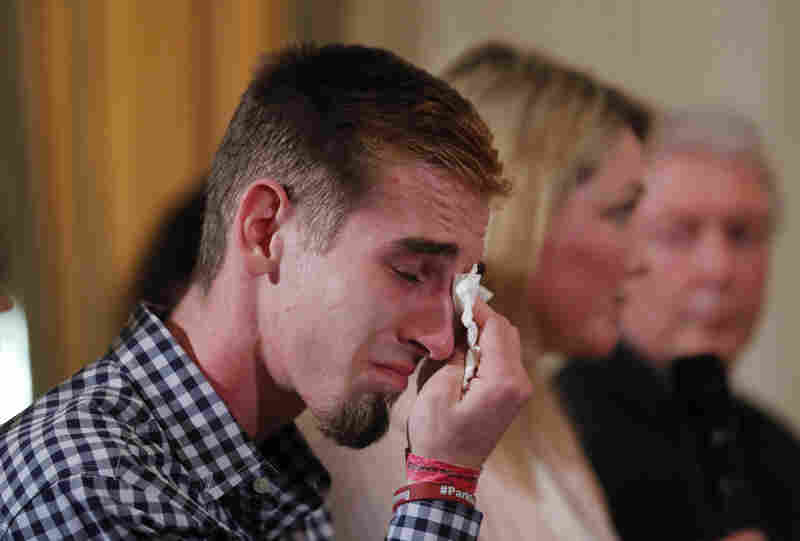 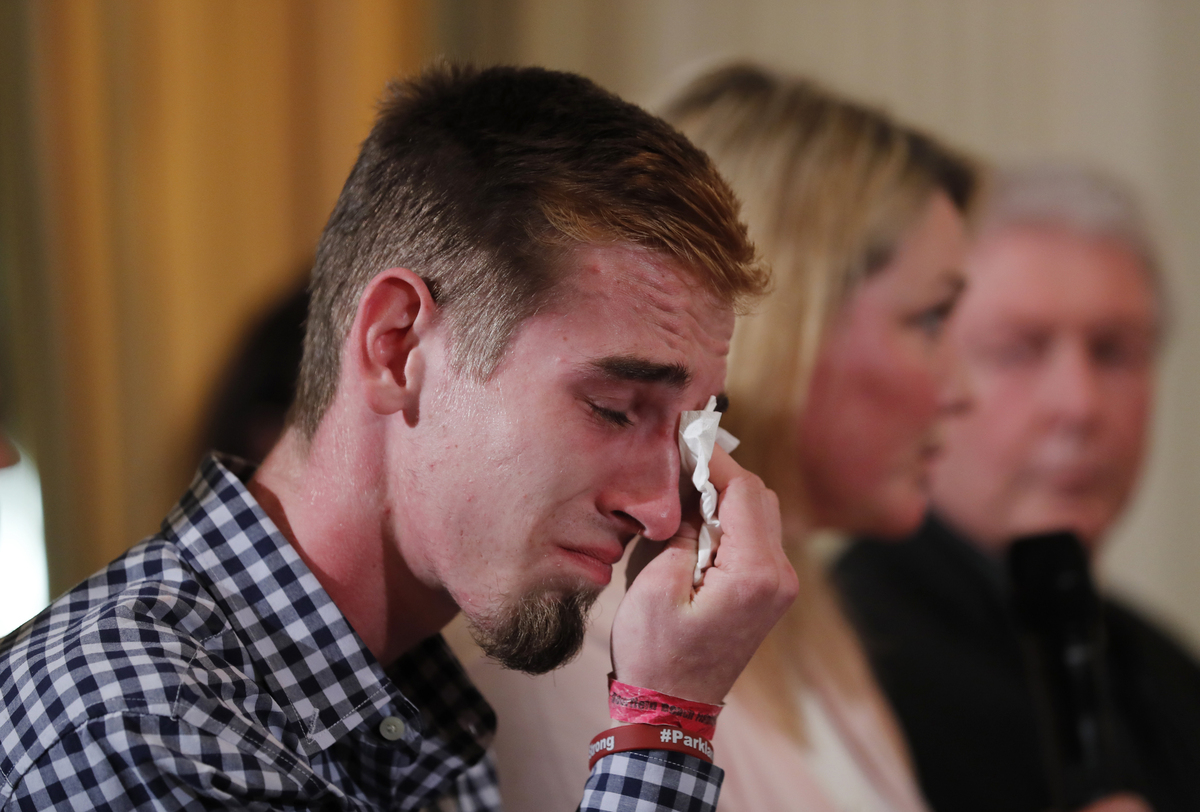 Zeif, sitting next to Nicole Hockley of Sandy Hook Promise, wipes away tears as President Trump hosts a listening session.

Over the past few weeks, Zeif has spent a lot of time trying to drive home a message about gun control — do something about the killing or get voted out. But at a window table inside a downtown Washington pizza joint, where he is squeezing in a few pieces of pizza before a hired car shuttles him back to MSNBC for a hit with Brian Williams just before midnight, Zeif isn't talking about organizing principles or NRA dollars or an assault weapons ban.

He is mostly talking about his friend Joaquin Oliver — known as "Guac." He was one of Zeif's best friends.

"Guac was unlike anyone else," Zeif says. "He's funny. Probably one of the most free-spirited people I know. He's just absolutely beautiful, like a beautiful face, like an angel."

They played on the basketball team together before Oliver was killed in his high school on Feb. 14.

"My favorite moments with him were in the car," Zeif says. "He would move as much as possible in a seat. I think even sometimes he would put his booty in the air."

Zeif and Oliver first met in middle school, but it took a few years before they got close. Zeif remembers thinking at a trip to the beach a few years later how cool Oliver was, and that he wanted to be friends with him.

These days, Zeif thinks a lot about their friendship. 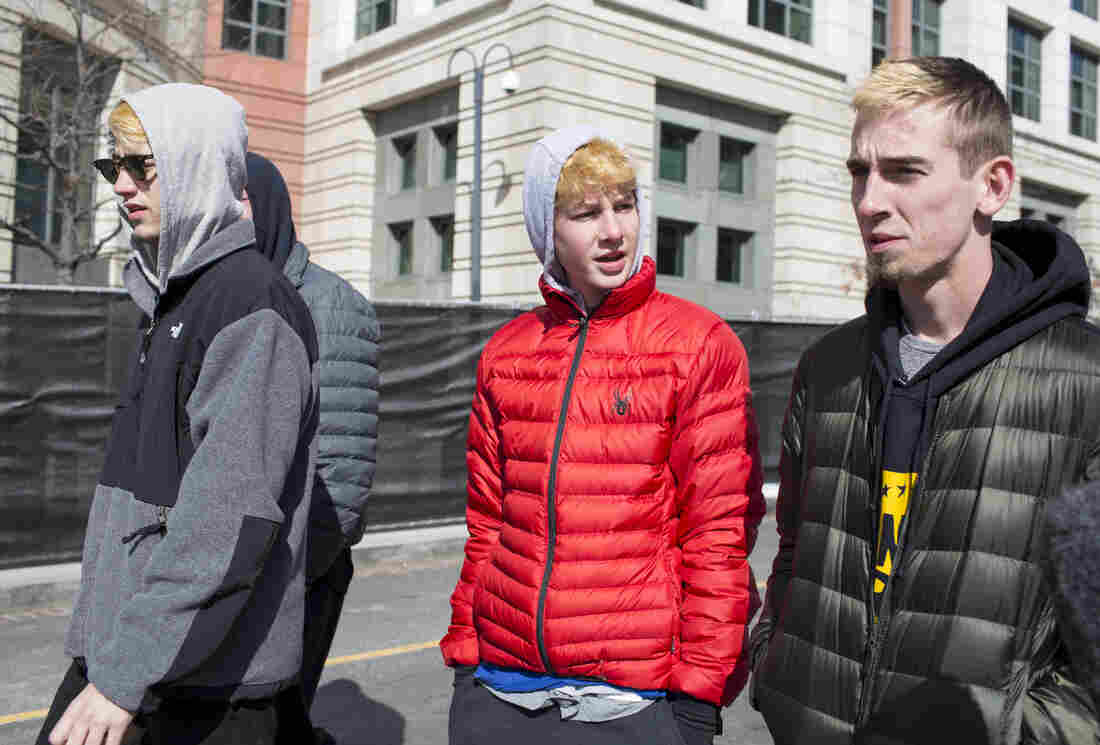 Zeif (right), his brother and a friend walk to the rally. Eslah Attar/NPR hide caption 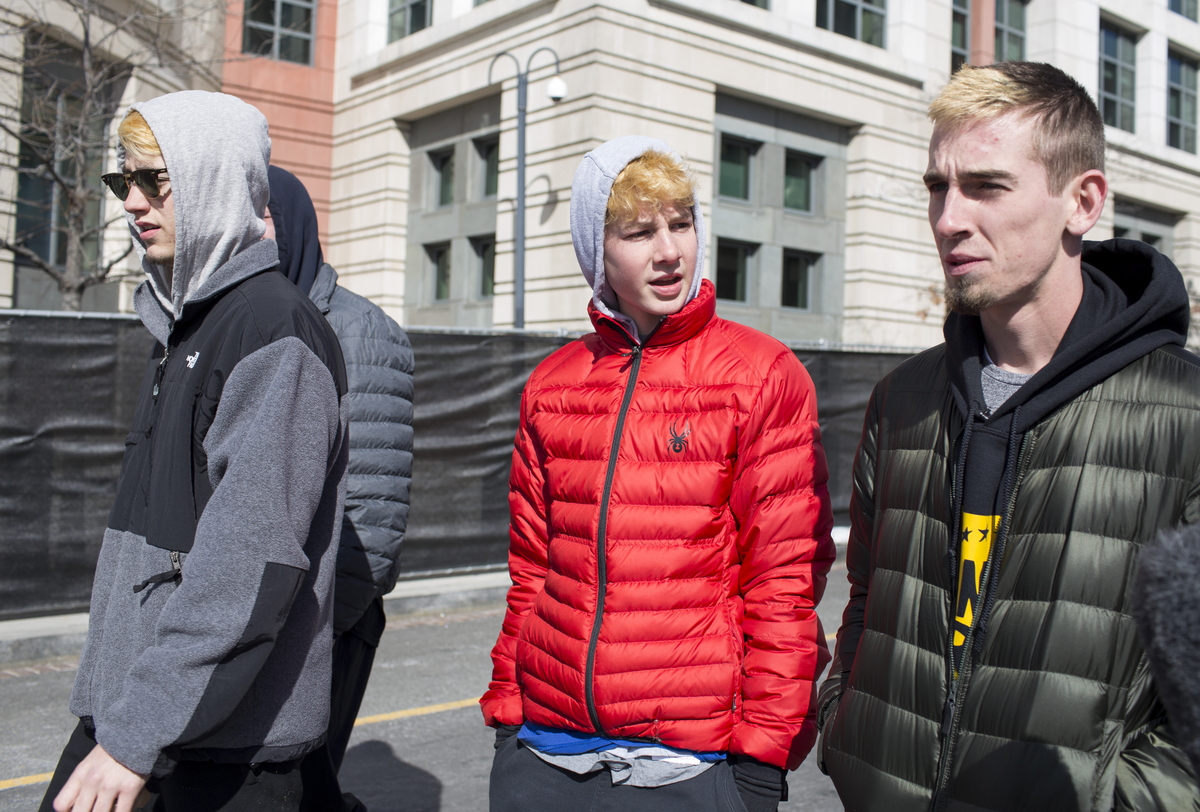 Zeif (right), his brother and a friend walk to the rally.

"I remember Guac and I got into a fight, and it kind of just happened out of nowhere," he says. "When we were fighting, it was when he dyed his hair blond. I wanted to tell him how good it looked, but what am I going to do?"

"He eventually he just said to me, 'Yo we gotta talk soon,' " he says, "so I hit him up to talk and as soon as he said yes I drove right to his house. I don't make myself that vulnerable to people like that, but I really wanted him in my life."

And that's when in the middle of the pizza restaurant, Zeif starts to cry.

"I just wish I had more time with him," he says softly.

There's not much time for grieving. There's another TV hit on the schedule — hair and makeup, small talk with the anchor and the production staff.

And the pace keeps on going.

When Zeif comes down to the hotel lobby the morning of the march, there are already two camera crews waiting to chronicle his journey to the rally site on Pennsylvania Avenue, where he has a seat on the stage. 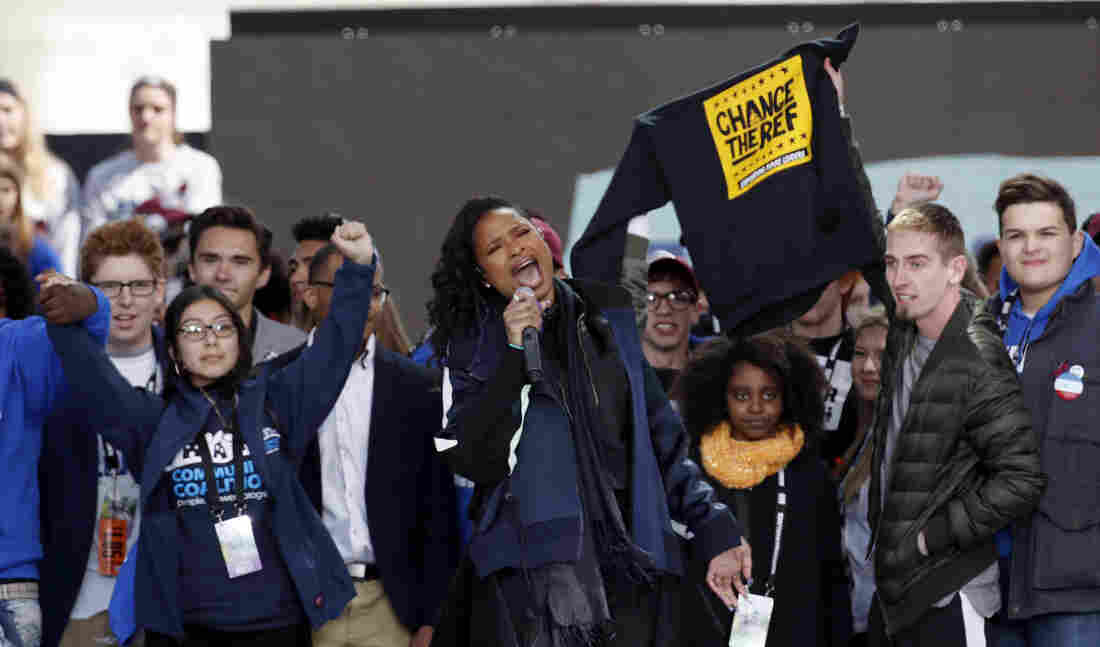 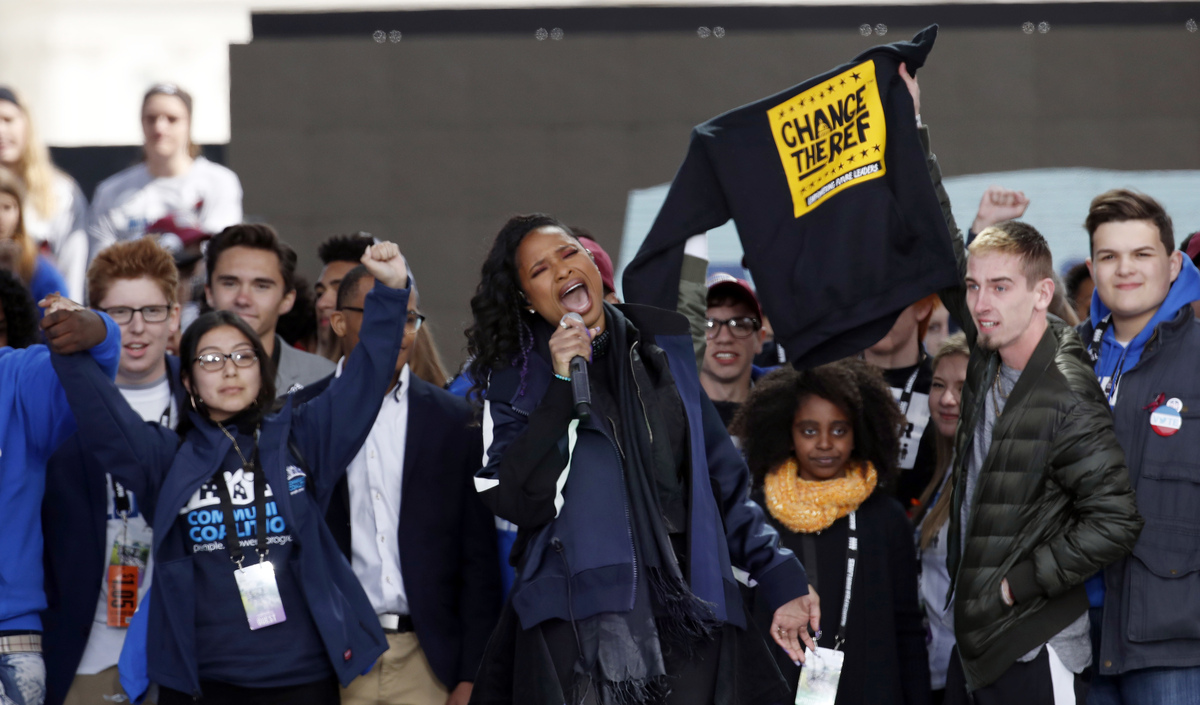 Jennifer Hudson (center) performs at the March for Our Lives.

There, he meets one of his favorite rappers, Vic Mensa, who is performing alongside people like Miley Cyrus and Demi Lovato. Toward the end of the program, Zeif holds up a T-shirt emblazoned with "Change the Ref" — the organization Oliver's father has founded in his son's memory. Zeif stretches it out wide right behind Jennifer Hudson as she sings " The Times They Are a-Changin' " backed by a choir and surrounded by Parkland students with their arms around each other.

Before the day is over, there's another roundtable on CNN, dinner with his parents, brothers and some friends near the hotel, and then, after a late night spent with friends in the hotel room, the big weekend is over.

"Well, it's not over," Zeif says Sunday morning. "The whole thing is not over. This was just the start of it." 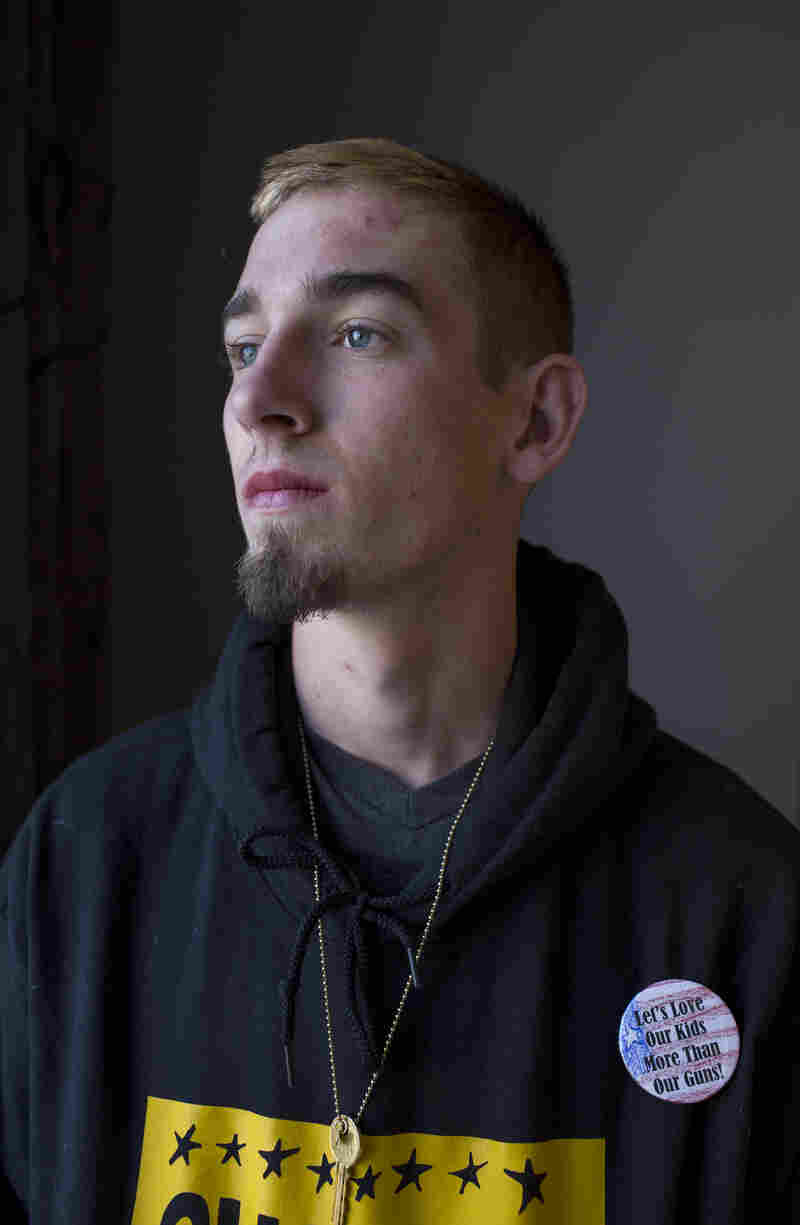 Zeif will head off to college this fall. Eslah Attar/NPR hide caption 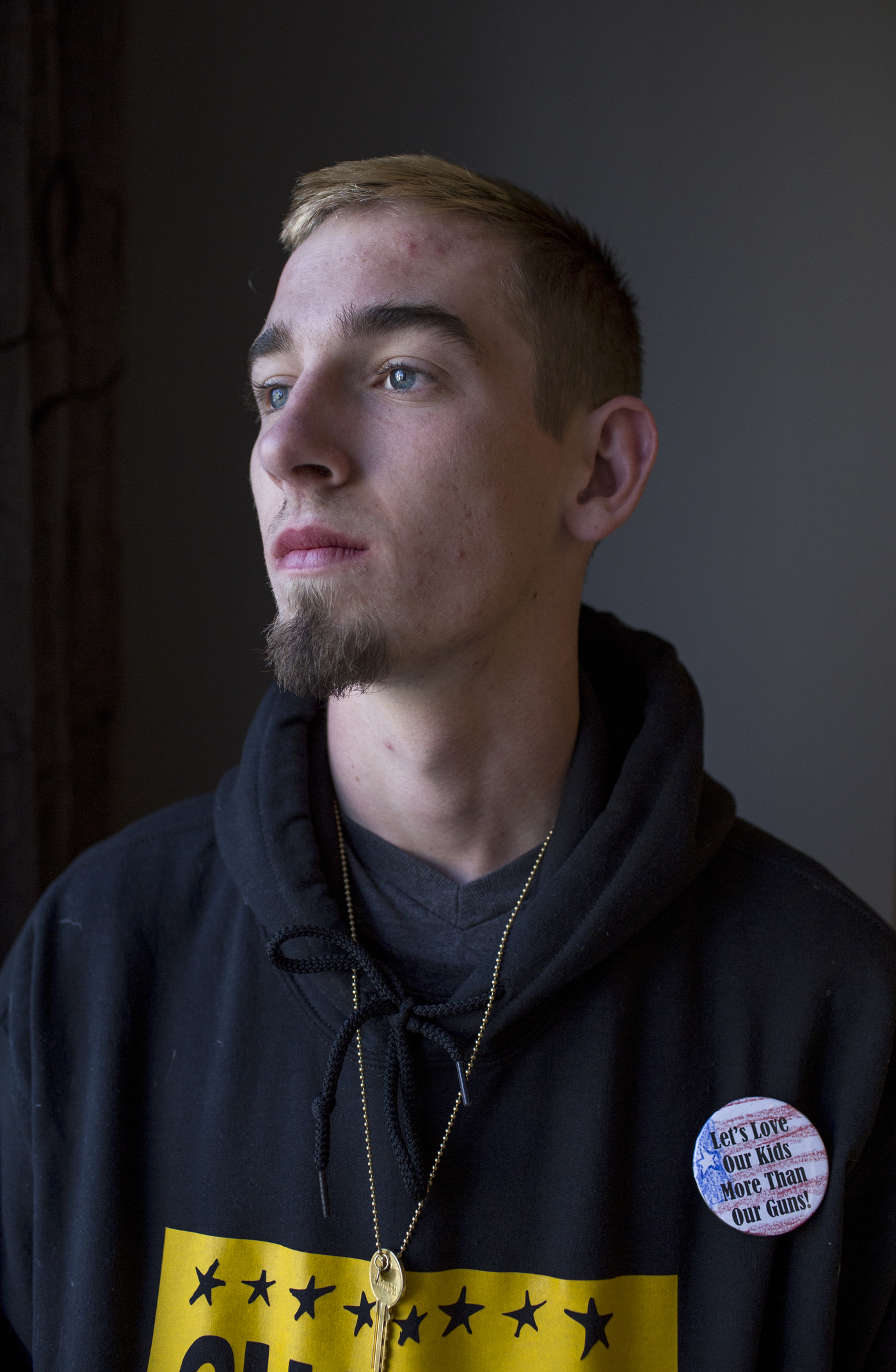 Zeif will head off to college this fall.

"Yeah, we finally did the march, and that's something we've all been anticipating for a month now. I don't know when or if or how I'll ever get over this," Zeif says of the shooting. "I don't want to get over it because I feel like getting over it is sort of forgetting."

In the fall, Zeif will head off to college at the school he was supposed to attend with Oliver.

Zeif turned 18 the day after the Parkland shooting.

When NPR first met him back in February, he told us it felt like he had turned 35.

He has had to do a lot of growing up in the past month.

In that time, he went to the funeral of one of his best friends. At the White House, he looked the president of the United States in the eyes and demanded he help make the killings stop.

He has been on TV, met Ellen and Vic Mensa and Vice President Pence; his Twitter following has reached nearly 20,000.

He is also still grieving.

A previous Web version of this story said Jennifer Hudson sang "A Change is Gonna Come" during Saturday's "March for Our Lives." "The Times They Are a-Changin' " is the actual song title.