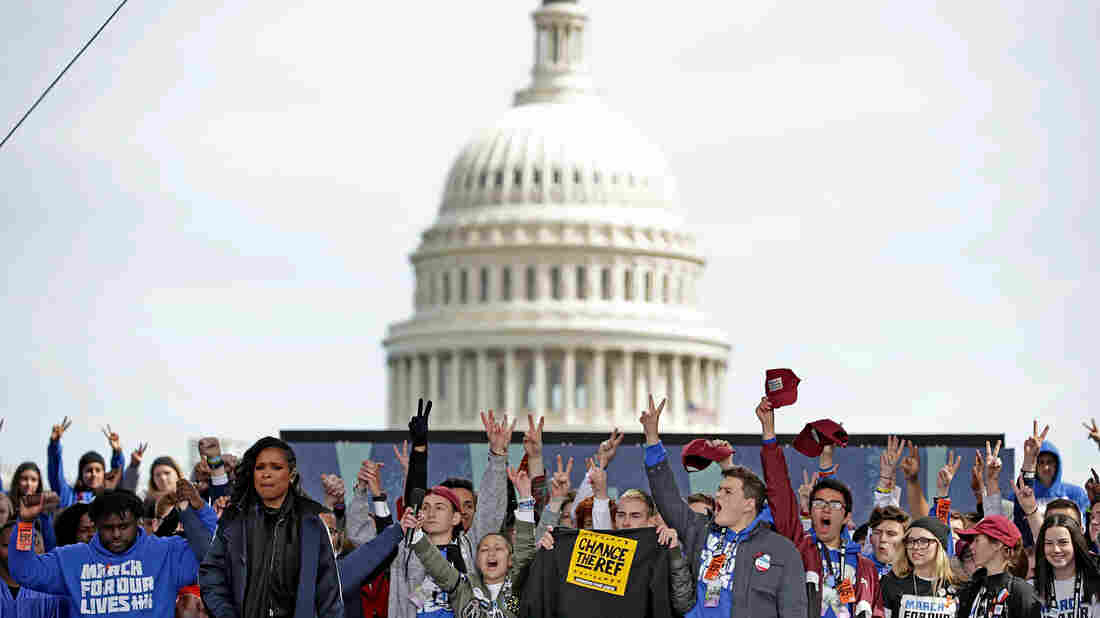 Young victims of gun violence, including students from Marjory Stoneman Douglas High School, stand on stage at the conclusion of the "March For Our Lives" rally Saturday in Washington, D.C. Chip Somodevilla/Getty Images hide caption 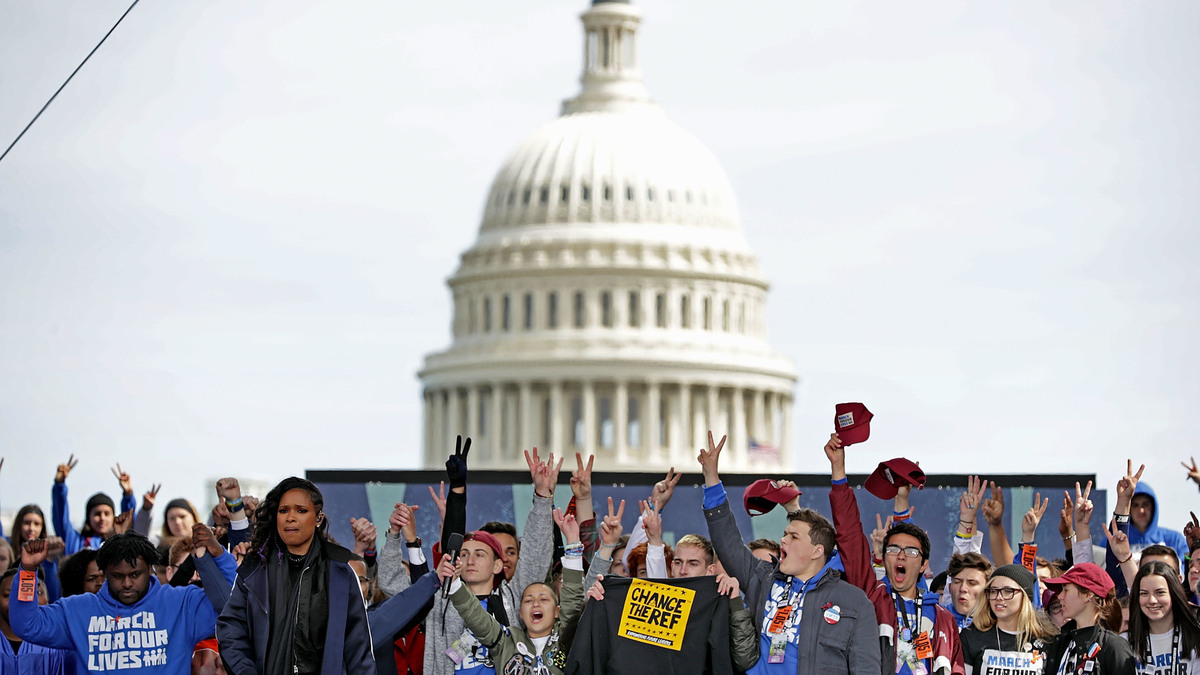 Young victims of gun violence, including students from Marjory Stoneman Douglas High School, stand on stage at the conclusion of the "March For Our Lives" rally Saturday in Washington, D.C.

Organizers of the "March For Our Lives" rally in Washington put the early cost estimate for the event at $5 million, and said they have "several million dollars" left to continue to push for stricter gun laws and fight gun violence.

Deena Katz, a Hollywood producer who became involved in the early stages of planning for the march, said fundraising efforts have been successful enough to ensure continued lobbying and other activism. She did not cite a specific amount, saying donations were still being tallied.

"I know we've raised enough that these kids are gonna have several million dollars that they can start their fight after the march," Katz said.

The teenage survivors of last month's shooting at Marjory Stoneman Douglas High School in Parkland, Fla., were the driving force behind the march in the nation's capital. Similar protests took place in cities around the country, and the world.

Illustrated Scenes From The 'March For Our Lives'

They put on the highly choreographed event in Washington, attended by hundreds of thousands of people, in just five weeks.

The March For Our Lives funding, according to organizers, came from crowdfunding and other donations — including from household name celebrities such as Oprah Winfrey and George Clooney.

The nonprofit board of the March For Our Lives Action Fund includes political figures and activists. It was formed to help organize the event, manage money and coordinate future lobbying efforts.

Cameron Kasky, a student at Stoneman Douglas, started the crowdfunding campaign that had raised a total of about $3.5 million as of Monday afternoon. More than 40,000 donations had been made to the campaign. The vast majority were in amounts under $1,000. The highest was $50,000.

Half of the funds raised from that campaign will go to paying for the march in Washington; the other half will provide financial support to the victims and families of the Parkland shooting, according to the website.

Some of the biggest contributors to the cause have been celebrities. Clooney and his wife, Amal, pledged $500,000, and Winfrey pledged to match that. Director Steven Spielberg and Hollywood producer Jeffrey Katzenberg also donated half a million dollars each.

The young activists have emphasized that this is still their movement — despite newfound fame and big money contributions. Stoneman Douglas students Kasky and Jaclyn Corin made that point in a Today Show interview last week.

"We don't accept influence. ... The second we let corruption, greed and money get involved with this in the wrong sense, we lose track of where we're going," Kasky said.

Jeri Rhodes, the action fund board treasurer, said the young activists wanted to make sure they were heard, and they got help from "people who have access to a large amount of money" and from "organizations and individuals who had done some pretty sophisticated productions."

"The students told us all what they wanted," Rhodes said, "and people stepped forward."

Both Katz and Rhodes referred to lobbying efforts as "phase two" for the group. Rhodes is an executive at Friends Committee on National Legislation, a Quaker lobbying group that "seeks to advance peace, justice, opportunity, and environmental stewardship."

According to the March For Our Lives website, the activists say they will fight for "comprehensive gun safety legislation at the local, state and federal level" and undertake voter education and ballot initiatives.

The March For Our Lives nonprofit has made clear that donations would fund those activities.

It's governed by the board comprised of adults. Organizers said that's because of legal restrictions on minors being on boards of nonprofits. The board also includes Aileen Adams, former Los Angeles deputy mayor, and Nina Vinik, program director for the Gun Violence Prevention Program at the Joyce Foundation.

George Kieffer, chair of the Board of Regents of the University of California, is also on the board, as are Melissa Scholz, principal attorney of Scholz Nonprofit Law, and Venetta Walker, vice president of programs and chief governance officer at BoardSource, a D.C. nonprofit executive training organization.