Accessibility links
Christian Colleges Are Tangled In Their Own LGBT Policies Conservative Christian colleges worry their official positions on LGBT issues could run afoul of sex discrimination law and harm relations with their own students. 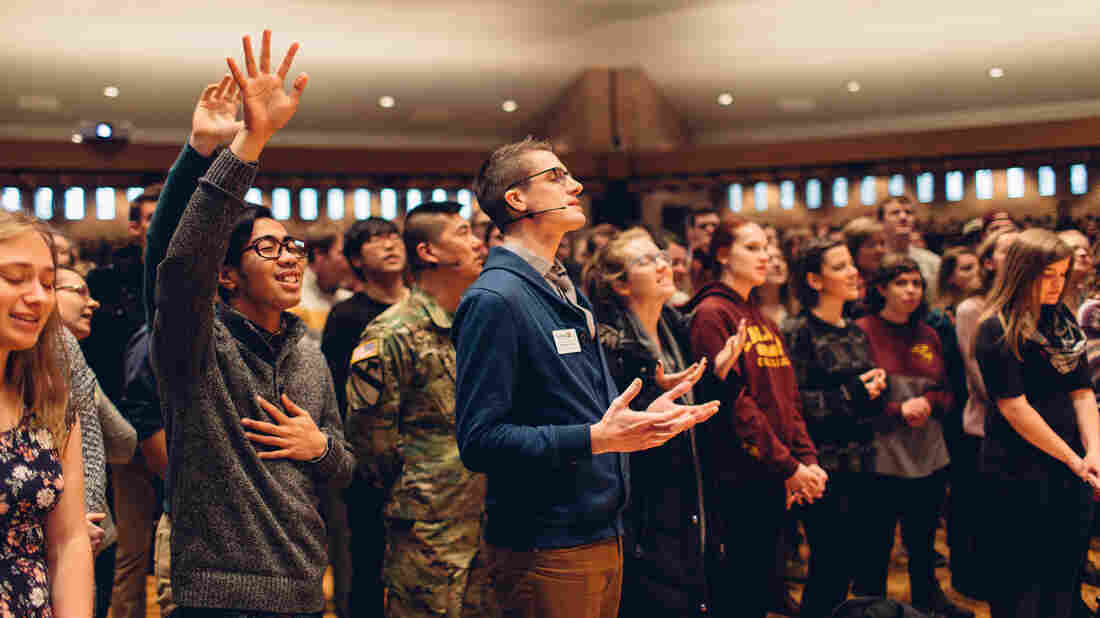 Calvin College in Michigan is affiliated with the Christian Reformed Church, which holds that "homosexual practice ... is incompatible with obedience to the will of God as revealed in Scripture." Noah PreFontaine/Calvin College hide caption 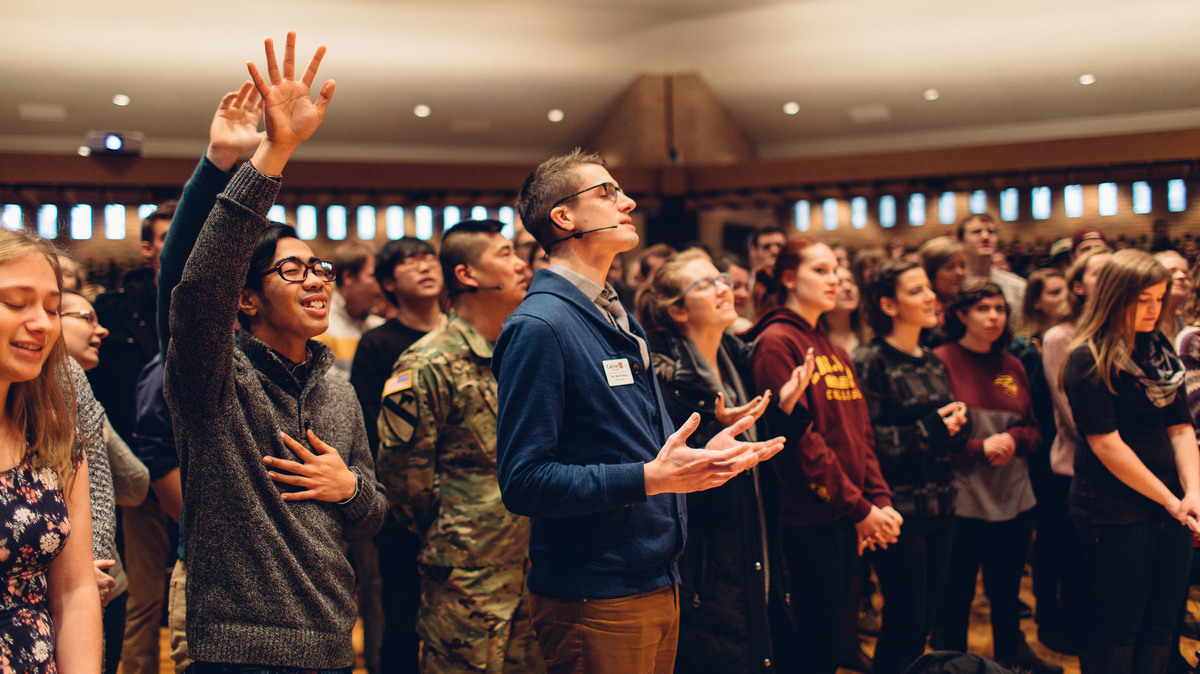 Calvin College in Michigan is affiliated with the Christian Reformed Church, which holds that "homosexual practice ... is incompatible with obedience to the will of God as revealed in Scripture."

Conservative Christian colleges, once relatively insulated from the culture war, are increasingly entangled in the same battles over LGBT rights and related social issues that have divided other institutions in America.

Students and faculty at many religious institutions are asked to accept a "faith statement" outlining the school's views on such matters as evangelical doctrine, scriptural interpretation and human sexuality. Those statements often include a rejection of homosexual activity and a definition of marriage as the union of one man and one woman. Changing attitudes on sexual ethics and civil rights, however, are making it difficult for some schools, even conservative ones, to ensure broad compliance with their strict positions.

"Millennials are looking at the issue of gay marriage, and more and more they are saying, 'OK, we know the Bible talks about this, but we just don't see this as an essential of the faith,' " says Brad Harper, a professor of theology and religious history at Multnomah University, an evangelical Christian institution in Portland, Ore.

LGBT students at Christian schools are also increasingly likely to be open about their own sexual orientation or gender identity.

"People I've met in the English Department," Koster says, "even in my dorms, they're like, 'Oh, you're queer? OK, cool. Do you want to go get pizza?' "

Staff and faculty at these Christian schools have to balance a need to attend to their students' personal and spiritual needs with a commitment to their schools' faith statements or official positions on sexuality.

"You've got those two values," says Mary Hulst, senior chaplain at Calvin. "We love our LGBT people. We love our church of Jesus Christ. We love Scripture. So those of us who do this work are right in the middle of that space. We are living in the tension."

Calvin College is affiliated with the Christian Reformed Church, which holds that "homosexual practice ... is incompatible with obedience to the will of God as revealed in Scripture." Hulst leads Bible study groups with her LGBT students and discusses with them the passages that refer to same-sex relationships.

"Those are the clobber passages," Koster says. "They're used to clobber queer kids back into being straight."

Koster was troubled by those Bible verses at first but eventually became comfortable with a devout Christian identity and joined the Gay Christian Network.

Koster says Hulst helped guide that faith journey, but Hulst herself is still torn between her love for her LGBT students and her own understanding that the Bible does not really allow them to act on their sexual orientation.

"It's a place where you need to be wise," Hulst says. "I tell them I want to honor Scripture, but I also honor my LGBT brothers and sisters."

It doesn't always work out.

"Someone from the LGBT community will say, 'If you will not honor the choices I make with my life, if I choose a partner and get married, then you're not actually honoring me.' I can understand that," Hulst says, grimacing. "I can see how they might come to that conclusion."

Though the language does not refer to sexual orientation or gender identity, some courts have interpreted Title VII as protecting LGBT individuals and the recent trend has been in a pro-LGBT direction.

Christian colleges and universities also have to consider Title IX of the Higher Education Amendments of 1972: "No person in the United States shall, on the basis of sex, be excluded from participation in, be denied the benefits of, or be subjected to discrimination under any education program or activity receiving Federal financial assistance."

As with Title VII, the question of whether "sex" under Title IX should be interpreted as referring to sexual orientation is hotly debated.

In April 2015, during a Supreme Court argument over the constitutional rights of LGBT individuals, Justice Samuel Alito noted that Bob Jones University in South Carolina had lost its tax-exempt status because of its prohibition on interracial dating and marriage.

"Would the same apply to a university or a college if it opposed same-sex marriage?" Alito asked then-U.S. Solicitor General Donald Verrilli Jr.

"It's certainly going to be an issue," Verrilli answered. "I don't deny that."

The exchange alarmed officials at conservative religious schools, for which the loss of tax-exempt status or federal funding would be devastating. Their anxiety deepened a year later, when the Obama administration notified colleges and universities that it interpreted Title IX as prohibiting discrimination "based on a student's gender identity, including discrimination based on a student's transgender status." Christian schools saw that letter as threatening a loss of federal funding if they refused to accommodate students who identify as transgender and want to be housed with other students who share their gender identity.

Upon taking office, the Trump administration rescinded the Obama directive, but some leaders at Christian schools still fear the cultural and legal trends are in favor of expanded LGBT rights on their campuses, which could mean their policies on sexual behavior could face serious challenges.

Educational institutions can currently apply for an exemption from the nondiscrimination provisions of Title VII by demonstrating that those provisions contradict their religious beliefs, but opinions vary on whether those exemptions will protect Christian colleges that seek to maintain strict student and employee policies relating to sexual orientation.

"Religious exemptions are exemptions because they are for small groups of people, and it doesn't necessarily undermine the full purpose of the law to have them," says Shapri LoMaglio, vice president for government affairs at the Council for Christian Colleges and Universities. "I think case law is upholding the idea that that exemption is the right thing in order to be faithful to the Constitution."

Other Christian college leaders, however, fear that the application of civil rights law to LGBT individuals could eventually jeopardize religious exemptions.

"Four years down the line, eight years down the line, depending on the makeup of the Supreme Court, depending on who is president, I can see the gay/transgender issue being pushed in a way that would seek to make Christian colleges either surrender their federal funding or change their position and conform with the wider consensus," says Carl Trueman, a professor of church history at Westminster Theological Seminary in Pennsylvania.

In a recent article in the journal First Things, titled "Preparing for Winter," Trueman argued that conservative Christian schools need to begin planning for a "worst-case scenario, where not only federal money but also tax-exempt status is revoked."

The combination of changing social attitudes and more complex legal issues were major points of discussion when the CCCU assembled representatives of more than 130 of its member institutions in Dallas in late January. College chaplains, student counselors and classroom professors reviewed how they were responding to LGBT students, while administrators and financial officers considered whether they need to prepare for more government scrutiny of their positions and policies on sexual orientation and activity.

"The fear is so large in many institutions because 40 or 50 or maybe even 60 percent of their budgets are really coming from the federal government," says Dale Kemp, the chief financial officer at Wheaton College in Illinois and the speaker at the CCCU session. "To think they could survive without that [funding] would be catastrophic."

Brad Harper of Multnomah University, which affirms that "sexual relationships are designed by God to be expressed solely within a marriage between a man and a woman," says he has seen growing anxiety about the future of federal aid at like-minded schools in recent years.

Just as vexing are the cultural questions, especially among the staff and faculty who work with LGBT students on a daily basis. All colleges and universities receiving federal aid are required to have a Title IX coordinator responsible for working with students who feel they have been subject to discrimination because of their sex. Whether gay or transgender students are entitled to Title IX protection is unresolved, so Title IX coordinators find themselves having to judge on their own how to respond to those students who seek their help.

"Sex has to do with identity and your gender and with who you are," says Christine Guzman, the Title IX coordinator at Azusa Pacific University in California, "so if there's a student who is feeling discriminated against because of their gender, then, yes, absolutely, I'm going to apply that law."

So far, at least, Guzman is attentive to gay and transgender students despite her school's official belief that human beings are created "as gendered beings" and that heterosexuality is "God's design."

At Calvin College, Hulst says the struggle to find an appropriate response to her LGBT students is among the most difficult challenges she has faced as a college chaplain.

"The suicidality of this particular population is much higher," she notes. "The chances that they will leave the church are much higher. These [realities] weigh very heavily on me."