Accessibility links
'Tangerine' Charts An Obsessive Friendship Turned Sour Christine Mangan's new novel, set in Morocco in the 1950s, centers on the sinister tension between two ex-friends — but the dusty, detailed Moroccan scenery sometimes gets in the way of the story. 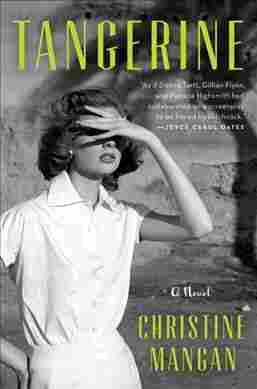 Christine Mangan's vaunted new novel Tangerine (it's already in production by George Clooney, with Scarlett Johanssen as lead) has been called out by some reviewers for its tired "evil-lesbian plot," by which they mean the weird and sinister tension between protagonist Alice Shipley and her former Bennington College bestie, Lucy.

Alice has been living in Morocco with her feckless husband John McAllister when Lucy Mason arrives without notice, eager to pick up where their relationship ended (badly) and equally eager to insinuate herself into every aspect of Alice and John's life, which she considers false. "I thought of the past, of all the plans that we had made, and wondered how it was possible that they had been changed for this, for him, though of course I knew it wasn't as simple as that." Lucy is obsessed with Alice, much like Tom was obsessed with Dickie Greenleaf in Patricia Highsmith's The Talented Mr. Ripley. (The same reviewers have, correctly, noted Mangan's homage to the Ripley novels and to Daphne du Maurier's examinations of obsessive love.)

Fewer reviewers, however, have paid attention to the title. Mangan may have wanted to reference the juicy, foreign fruit as a symbol of eroticism, but "Tangerine" also means "a woman of Tangiers," a native, someone who can disappear into the background. What does Lucy really want? To take over Alice's life, or to create a new one of her own?

The answers lie in the hinted-at tragedy that drove the women apart in the first place, and while we don't learn about that until quite late in the novel, Mangan does tell us there's a "thing that happened." Alice, never particularly strong, raised as a sort of half-British hothouse flower, wilts visibly beneath the strong North African sun; by the time Lucy arrives, Alice has nearly ceased leaving the house altogether. She's terrified by all of the things Lucy embraces: The teeming souk, steaming mint tea, seeing the Mediterranean up close.

As Alice's agoraphobia allows Lucy to insinuate herself into the couple's life, it also allows Lucy to do more once she's rattled the bricks of their shaky foundation. She's not just after what Alice has; she's after who Alice is. Unfortunately, this is where the novel veers way off course, because neither woman's character is firmly enough established. We know that Lucy grew up above the garage her father owned and is envious of Alice's advantages. We know that Lucy is in love — or, at least, lust — with Alice. Do those things equal criminal intent?

Not for today's population, they don't, which may be why Mangan chose to set her debut in the 1950s, where social class and sexual identity were culturally more fixed and, therefore, scarier when threatened. Unfortunately, the author's attempts to fix Lucy as potentially criminal are less successful than her depiction of Lucy immersed in Moroccan culture. Compare "At this information, at the power it provided me, my ears began to roar, my hands shake" to "I stopped at one stall, and then another, purchasing a few grams of bright green olives at one, a stack of hot, sweating msemmen at another."

Tangerine is told in alternating chapters by Alice and Lucy, and as sentences like the above stuck out at me again and again, I wondered how the book might read if Lucy were the sole narrator. That wondering is less a sign that it should have been written in that fashion than one I was not wholly engaged in the story. Alice's dithering ("those things I did not understand, those places and people that remained a mystery to me") annoyed me.

I wanted more of Lucy's drive to escape her past and move into a future without ties. Surprisingly, what gets in the way of that is the scenery. Everything is "dusty" and "brilliant" and full of "sweetness" and "heat" all the time, in a novel that's more to do with interiority than atmosphere. Classic writers of thick, Gothic suspense like Highsmith and Du Maurier knew how to match psychology and setting. Towards the end of Tangerine I hoped, for a moment, that Mangan would integrate Lucy's motives with her surroundings, that character and reader would both become lost in a chaotic bazaar filled with both possibility and purgatory. While that didn't happen, who knows what Christine Mangan will write next? Something, I hope, with a strong female protagonist and another fascinating location.