Accessibility links
Magnificent Book Captures The Beauty And Tragedy Of The Battleship Yamato Jan Morris chronicles the final days of the most powerful warship in the Imperial Japanese Navy in her latest book. Critic Maureen Corrigan calls Battleship Yamato a work of both power and restraint.

Listen · 6:19 6:19
Magnificent Book Captures The Beauty And Tragedy Of The Battleship Yamato 6:19 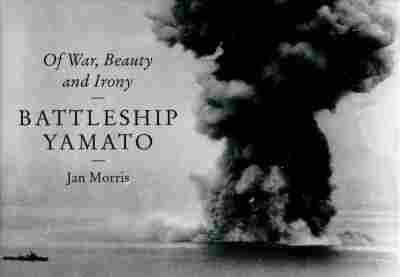 Of War, Beauty and Irony

For over 40 years, Jan Morris' admiring readers have followed her wherever she's chosen to go. Perhaps best known for her grand descriptive powers as a travel writer, Morris, now 91, has also written acclaimed works of history and biography.

In 1974, she published a groundbreaking memoir called Conundrum about the other thing she's best known for: her courage in going public about being a transgender woman, at a time when that term wasn't even used. Two years earlier, Jan — then James, a married man and father of five — underwent gender reassignment surgery in Morocco.

Somewhat tongue-in-cheek, Jan Morris has said that: "I do not doubt that when I go, the event will be commemorated with [a] small back-page headline [that reads] 'Sex Change Author Dies.'" Surely, that prediction is wrong, in part because of the widespread changes in cultural understanding about gender that Morris herself has helped usher in.

The book of Morris' that I love and teach and reread almost yearly is called Manhattan '45. In it, Morris takes readers back to the beginning of one of New York City's great golden ages. The book opens on a vision of the British ocean liner Queen Mary entering New York Harbor. The ship had been turned into a troop ship during World War II, and its decks were crammed with jubilant American servicemen and women. Morris wasn't on the Queen Mary that day, but she personally experienced a moment of triumph at war's end. As 17-year-old James Morris, she'd joined the Queen's Royal Lancers and served in the closing stages of World War II.

Like Manhattan '45, Morris's latest book, Battleship Yamato, opens on a ship poised at another signal moment at the end of the war. The Yamato was not only the most powerful warship in the Imperial Japanese Navy, but the most powerful warship the world had ever seen. It carried a crew of around 3,000 men and each one of its main gun turrets was as heavy as a destroyer.

Morris calls the Yamato "an ironically beautiful instrument of death." On her writing desk in her home in Wales, Morris keeps a model of the Yamato along with two other battleships.

The short, illustrated book Morris has written about the Yamato is what she calls "a reverie" on the varied emotions that war summons up, including "pride and splendour," "sacrifice," "squalor" and "carnage." I think it's safe to say that Morris has also written a reverie on accepting the inevitability of death.

Morris focuses in on the Yamato's fateful final two days in early April 1945. It was almost the end of the war in the Pacific, and American forces were about to invade Okinawa. The Imperial Japanese Navy had been all-but-decimated.

As Morris tells the story, on the morning of April 5, the thousands of sailors aboard the Yamato were mustered on deck to learn their mission: The ship and her few remaining escort vessels would form an attack force called "Ten-ichi-go," translated as "Operation Heaven Number One." The little band would hurl itself against the massive U.S. forces invading Okinawa.

Morris references Shakespeare's Henry V, Picasso's "Guernica" and other masterpieces of war to talk about this moment. Just as powerful here is Morris' signature tone as a writer, in which a deep emotional connection to her subject is palpable beneath the surface of her restrained words:

For ... it is not only we, a century on, who know the fate of Ten-ichi-go. The sailors might cheer their captain, but all too many of them, ... understand what that message means. Yamato herself is to commit suicide, as the noblest of kamikaze weapons. At best she is to beach herself on an Okinawan coral and in her death-throes use all her guns, all her ammunition, all her heroes, in support of the Japanese army. At worst, she is simply to blast away at her enemies until she herself is sunk.

The Yamato was indeed sunk, in 3 1/2 hours, on April 7, 1945. Some 2,500 men were lost. Her sinking signaled the end of the dominance of sea warfare and, as Morris suggests, perhaps the end of the Age of Empire.

This book itself signals yet another end: Certainly, it will be one of the very last books written about World War II by an author who saw active service in that war. That sobering fact only adds to the elegiac resonance of this magnificent little book.