Accessibility links
Trump Under Oath: Sometimes Combative, Often Boastful, Usually Lacking Details President Trump says he wants to testify in the special counsel's investigation. He could also face depositions in several civil cases, something he has been through many times before. 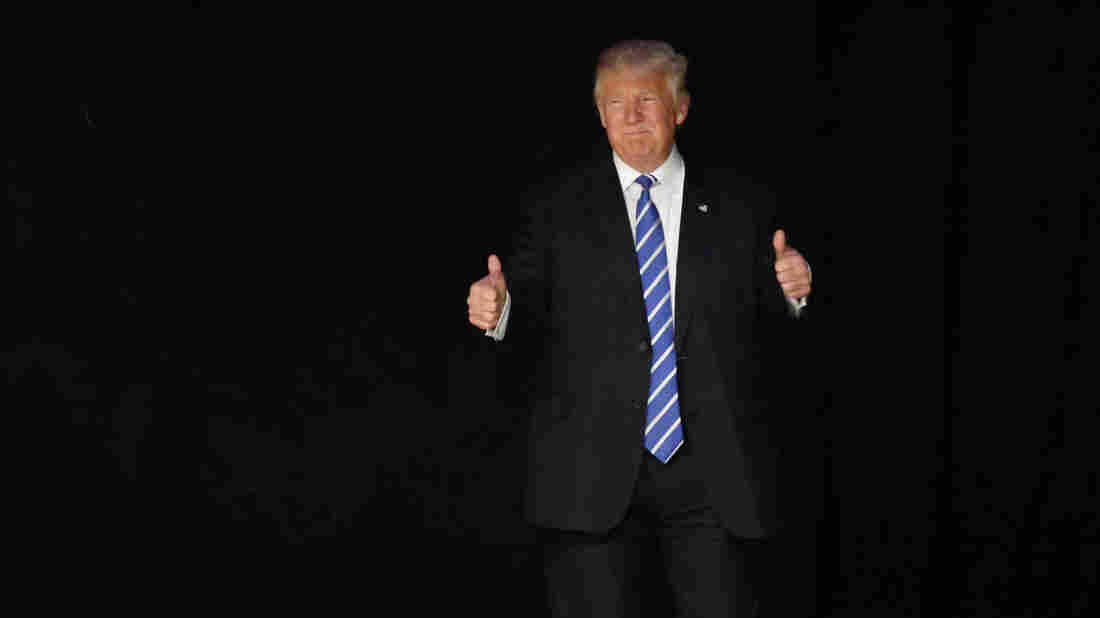 Then-candidate Donald Trump appears at a political event in Dallas on the same day in June 2016 that he was deposed in a lawsuit over a contract dispute. Trump is often more subdued while testifying under oath, but he can show a combativeness familiar on the campaign trail. Ron Jenkins/Getty Images hide caption 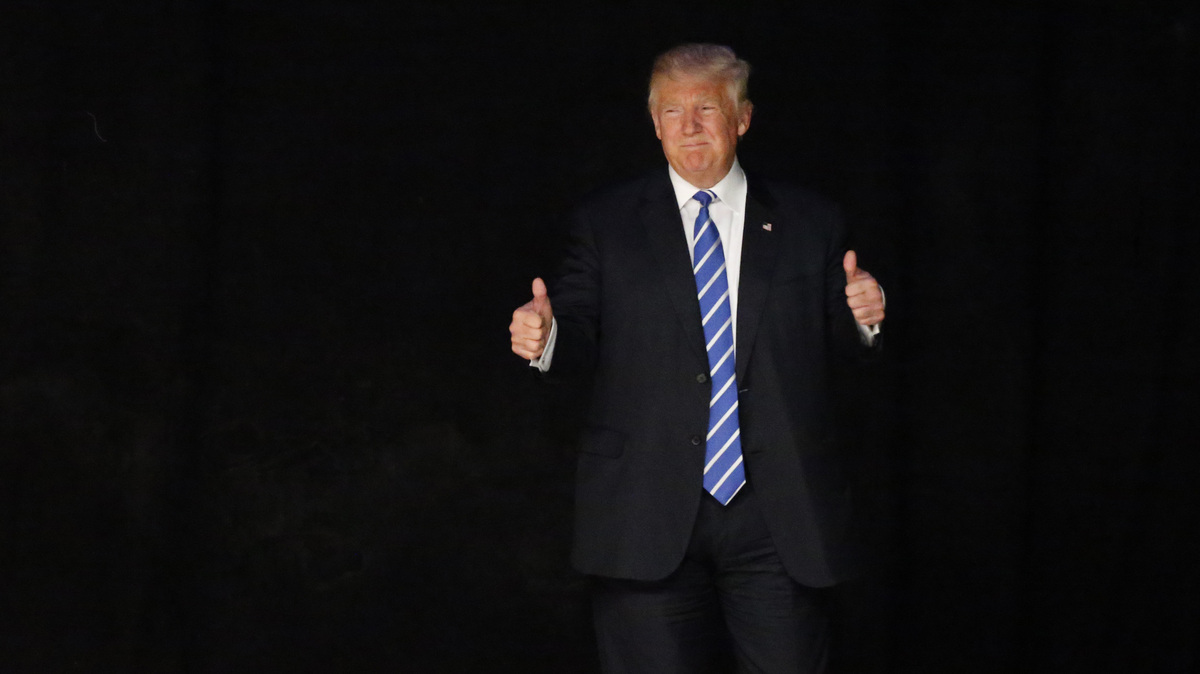 Then-candidate Donald Trump appears at a political event in Dallas on the same day in June 2016 that he was deposed in a lawsuit over a contract dispute. Trump is often more subdued while testifying under oath, but he can show a combativeness familiar on the campaign trail.

In June 2016, then-candidate Donald Trump raised his right hand and swore to tell the truth, the whole truth and nothing but the truth. On the verge of becoming the Republican nominee for president, Trump sat for a videotaped deposition, a familiar experience for a businessman who had sued or been sued thousands of times.

"I imagine you've had your deposition taken a number of times?" asked lawyer Deborah Baum, who led the questioning. "I have, yes," Trump answered.

Records of President Trump's past depositions show a familiar pattern of boasting, sometimes battling opponents and giving little deference to factual details — pitfalls that could all come into play in various legal cases before too long.

Trump says he "would like to" testify in special counsel Robert Mueller's Russia investigation. And he may have to sit for depositions in cases involving women he allegedly had sexual contact with more than a decade ago, whether he wants to or not. Former The Apprentice contestant Summer Zervos sued him for defamation after he denied claims that he had sexually harassed and groped her, and adult film star Stormy Daniels alleges a 2006 sexual encounter and is seeking to get out of a nondisclosure agreement.

The stakes of any potential interview with Mueller's team are clearly quite high, but don't underestimate the risks of civil suit depositions. Former President Bill Clinton was impeached after giving false testimony during a civil deposition about a sexual relationship he had with Monica Lewinsky.

In the 2016 case, Trump had sued for breach of contract after celebrity chef Geoffrey Zakarian pulled out of plans to open a restaurant in Trump's Washington, D.C., hotel. Zakarian countersued. At the heart of the disagreement was Trump's disparaging description of Mexican immigrants in the 2015 speech launching his presidential campaign.

In June 2016, then-candidate Trump sat for a deposition in a lawsuit involving his Washington, DC hotel.

Trump was more subdued than he is in public, but no less braggadocious, to borrow a word from the president.

Baum: Why do you think they wanted to get out of the lease?

(Trump's lawyer objects, but he proceeds to answer.)

Trump: I don't understand why, why they did this. I'm running for office. I obviously have credibility because I now, as it turns out, became the Republican nominee running against, we have a total of 17 people that were mostly senators and governors, highly respected people. So it's not like, you know, like I've said anything that could be so bad. Because if I said something that was so bad, they wouldn't have had me go through all of these people and win all of these primary races. And I'm pretty even in the polls or close to even in the polls right now.

Trump later mentioned, twice, that he had gotten more votes in the Republican primary than any other presidential candidate in the history of the party.

In deposition transcripts over the years, Trump comes across as uninterested in details, unfamiliar with legal documents and occasionally impatient. One theme that emerges is preparation. Baum, in the 2016 session, asked Trump what he did to prepare.

Baum: What did you do to prepare for the case today, for the deposition?

Trump: I would say virtually nothing. I — I spoke with my counsel for a short period of time. I just arrived here, and we proceeded to the deposition.

Baum: Thank you. So you didn't look at any documents or

In a 2011 deposition for a case related to a failed Florida condo and hotel development, the plaintiff's lawyer Elizabeth Beck starts by asking Trump to look at a document.

Beck: Exhibit 323.9 (Whereupon, a document entitled 10 Re-Notice of Taking Deposition11 was marked Plaintiff's Exhibit 32312 for identification.) Mr. Trump, have you seen this document before?

Beck: Well, this is your deposition notice. Are you here pursuant to this re-notice of deposition?

Early on Beck asks Trump about how involved he is in decision-making at the Trump organization.

"If other people in your organization makes that decision, do they do it with your approval and/or sanction?" she asked. "Generally, yes," Trump said.

"When would that not be the case?" Beck asks. "I don't know of any case where that's not the case," Trump responds.

But, then, throughout the deposition he repeatedly claims a lack of knowledge, saying details were handled by his children and telling Beck she will have to check with his lawyers or accountant to get an answer.

At one point, Trump gets testy.

Whether these were strategic claims of ignorance or simply a lack of familiarity with the document and details is unclear. But it fits a pattern going back to 2007, when Trump sat for two days in a deposition in a suit over the book Trump Nation, The Art of Being The Donald by Tim O'Brien.

"Oh no no no, he did not prepare," said O'Brien in an interview with NPR. "It wasn't even just my sense of it. He was comically unprepared."

O'Brien was the defendant in that lawsuit and spent countless hours working with his attorneys to prepare for his own deposition in the case, poring over binders of documents and refreshing himself on the contents of the book. Trump, he says, exhibited no such preparation, at one point saying he decided the valuation of his golf courses with "mental projections."

The video of Trump's deposition in that case was never released, but there is a transcript.

O'Brien says Trump's past experience under oath provides a cautionary tale for the president and his lawyers.

"You don't even have to lay a trap if you are asking about a factual circumstance with documents to back it up and the individual at hand, in this case, Donald Trump isn't familiar enough with the fact pattern and has a propensity to exaggerate in the best cases and misrepresent or lie in the worst ones," O'Brien said.

Take the 2016 deposition, Trump found himself walking back testimony when confronted with documents. When asked about negotiation of the restaurant lease at the heart of the suit, Trump claimed ignorance, saying his adult children handled the details and just told him when the deal was done.

Baum: Did you have any understanding about the key business points in the lease negotiations?

Baum: Did they tell you how they were going? Was there any issue?

Baum: Just, We have a deal?

Trump: We have a deal.

Trump: They said, We just signed the lease. We have a deal with Zakarian.

Baum: So they said, We just signed a lease and we have a deal?

Trump: Don did. He told me when they signed the lease. I don't know when that was. But, you know, it was a while ago. But he told me, you know, We have a signed lease for the restaurant.

But then a few minutes later Baum pulled out a copy of the lease and had Trump look at it.

Baum: The reason I was puzzled by your answer earlier about your son telling you the lease had been signed, my understanding is that you signed this lease. And if you look at —

Trump: He asked me, yeah.

Trump: Yeah, I didn't — I believe I signed the lease. But he came in and said, We're signing the lease. So I'll change that.

Baum: He said, We're signing it?

Trump: Yes. Because I think I signed it.

Presented with his own signature, Trump had to admit that he had seen and signed the lease.

Trump ultimately settled with Zakarian for undisclosed terms. And his suit against O'Brien was thrown out.

And as the president prepares to potentially talk to the special counsel or face down Zervos or Daniels, there's one tidbit from the 2016 deposition that could work in his favor: Trump claimed not to have a personal paper trail.

Baum: Do you keep handwritten notes?

Baum: I think your daughter told me in her deposition that you don't e-mail, and I observed that that's because you're a very smart person.

Trump: Yes. We've figured that out. Took a lot of people a long time to figure that out. That's right.

Baum: But do you make notes, do you have anything on paper related to this case?