Accessibility links
Immigration Is (And Isn't) Black And White In 'Yellow Negroes' French cartoonist Yvan Alagbé uses a stark black and white palette to investigate the ways Western comics portray race — and the ways his country treats (and mistreats) its immigrant population. 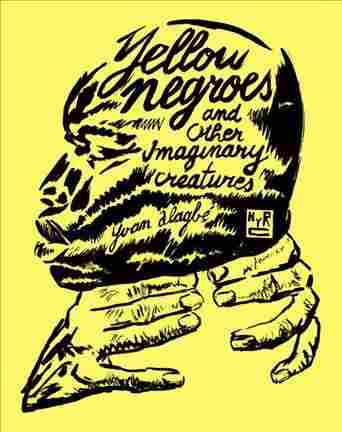 Yellow Negroes and Other Imaginary Creatures

by Yvan Alagbé and Donald Nicholson-Smith

When people talk about immigration, they talk in numbers. Take the migration policy proposals France's President Emmanuel Macron introduced last month: 90 days was the proposed amount of time a person without papers could be detained (up from the current 45). 12 months in jail, plus fines, would be the penalty for illegally crossing borders. Six months would be the new period for considering asylum applications (down from one year). Numbers also provided an essential context for reporting on the proposals, with news outlets noting that the 100,000-strong mass of people applying for asylum in France last year was 17% more than in 2016.

Paris-born artist Yvan Alagbé strikes out against numbers in Yellow Negroes and Other Imaginary Creatures. The stories in this graphic novel are about the truths — subtle, sad and surreal — that statistics can never capture. In the title story, an emotionally disturbed police officer uses the unvoiced threat of deportation to force an immigrant family to accept his companionship. In "The Suitcase," a woman struggles to pack for an ill-fated journey from "her native land to France/Hollywood." In "Postcard From Montreuil," a group of undocumented workers who protest every day outside an employment agency suddenly vanish — along with the agency.

"All that remain are the usual passersby, the regulars in the café across the street, and, reigning over the square, the impressive and unmovable monument to the French resistance to Nazi barbarity," Alagbé writes. "At the base of this curious sculpture, engraved on the marble, are [the] words, 'If the echo of their voices weakens, we shall perish.'"

This story, like the others in the book, is drawn in thick strokes of uncompromising black on white. Alagbé's ink feels more like paste — dense and chunky — and though his characters are sometimes poised in webs of painstaking lines, more often his scenes seem to burst onto the white page in a discordant frenzy that disturbs the eye. In the title story, the face of the policeman is a chaos of textures. In some panels he seems to have been drawn with at least three different instruments. The immigrants he's harassing are sketched lightly and minimally — that is, until government forces turn up. One, an artist like the author, is arrested for jumping a Metro turnstile and meets a grim end. His body is reduced to a series of black gashes when he's dragged out of the last panel.

Alagbé uses his sparse palette to deliver a potent message about how race is portrayed in Western comics. White artists sometimes depict dark-skinned characters by using pitch black, reducing them to near-featureless nonentities. Alagbé forces his heavy black ink to reveal character in unexpected ways. In "Dyaa," people's faces are drawn with varying levels of detail, and even featurelessness conveys much about what's going on inside someone's head. In "Postscriptum," black and white characters' faces emerge from whorls of squiggles into startling definition.

Alagbé uses his sparse palette to deliver a potent message about how race is portrayed in Western comics.

Also, Alagbé just likes to see what you can do by eliminating color. "Postcard From Montreuil" is a masterpiece of monochromatic impressionism, with street scenes taking form out of seemingly casual scatterings of marks. Despite its bleak message, it's light and elegant. Mostly, though, he uses his heavy pen to savage comfortable assumptions. The immigrants he draws have seen their hopes dashed; if they've made it to Europe at all, they've been forced to accept that it's no "France/Hollywood."

Alagbé is irrevocably intertwined with his subjects despite his French birth. "I remain alone behind the book. No. I live with the dead. With the Moors, the blacks, the mad," he writes near the end, amid a series of passionate, confusing and alarming drawings. Not surprisingly, he closes the book on a question rather than a declaration — a refusal of certainty rather than an overarching message. It's also a challenge to all who see immigrants as numbers on a spreadsheet. "Can the world hold all of the woes of the world?" he asks. "Can my love?"