Accessibility links
Will Trump And Guns Be Enough To Unseat An Endangered House Republican? Colorado Rep. Mike Coffman is one of the GOP's most battle-tested incumbents. In 2018, President Trump's unpopularity and an energized Democratic base present his toughest hurdles to re-election yet. 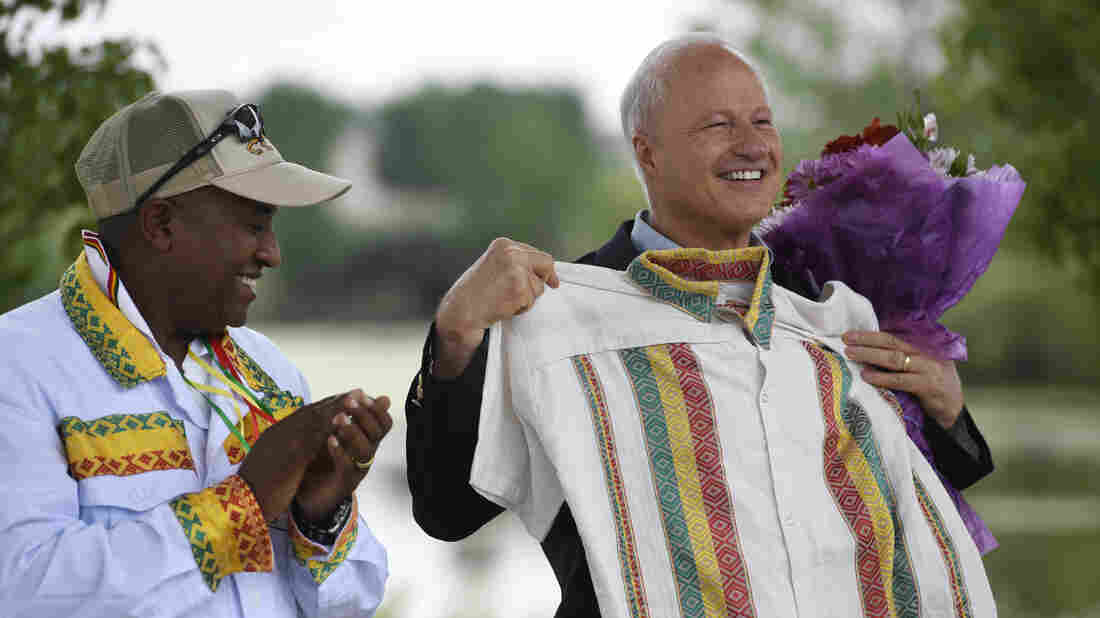 U.S. Rep. Mike Coffman, R-Colo., accepts a gift of a traditional Ethiopian shirt from Girum Alemayehu at an Ethiopian festival in Denver in August 2016. Coffman has survived multiple tough re-election campaigns in part due to his outreach to various immigrant communities in his district. Andy Cross/Denver Post via Getty Images hide caption 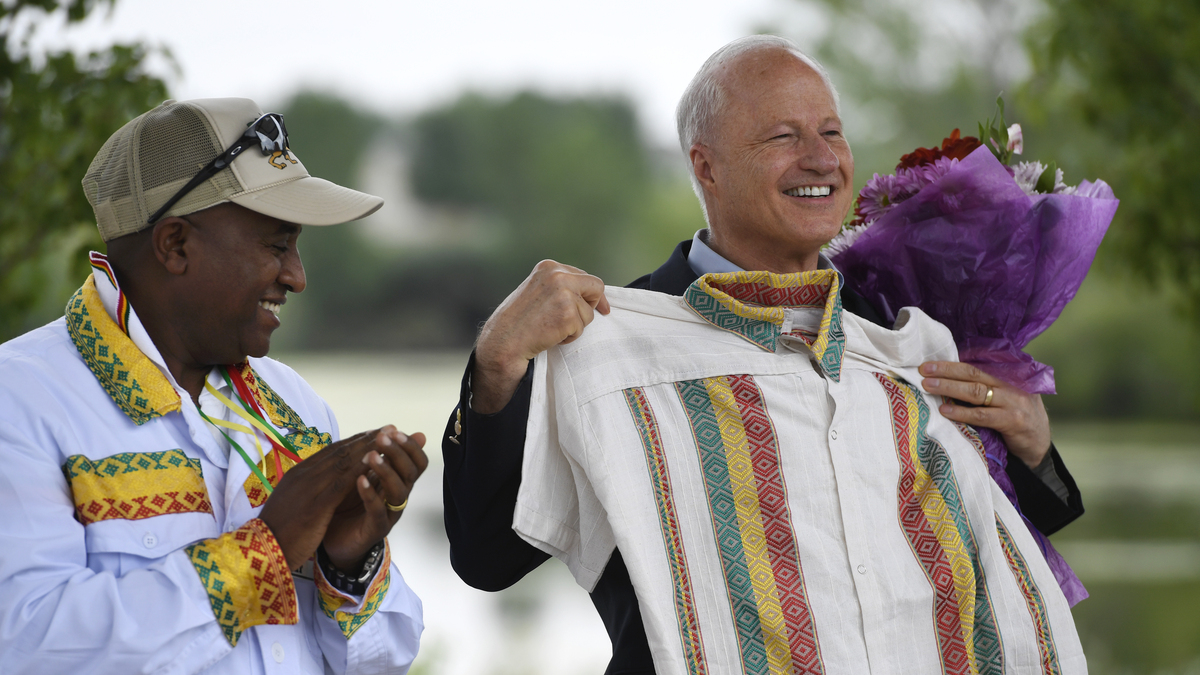 U.S. Rep. Mike Coffman, R-Colo., accepts a gift of a traditional Ethiopian shirt from Girum Alemayehu at an Ethiopian festival in Denver in August 2016. Coffman has survived multiple tough re-election campaigns in part due to his outreach to various immigrant communities in his district.

The latest flash point in the nation's gun debate sent millions of Americans marching into the streets over the weekend in cities like Denver to call for stricter gun laws.

"I've never, until this year I haven't contributed a dime in my entire life to anybody's campaign. This year? I've given more money than I ever thought I would do," said David Frieder, a retiree who attended Saturday's gun march in downtown Denver.

Frieder is holding a protest sign that attacks Colorado politicians who have taken contributions from the National Rifle Association. Among them is his congressman, Republican Mike Coffman. "He continues to support the NRA and take money from the NRA, and doesn't return it, and I'm tired of it," he said.

Frieder is exactly the kind of voter — white, suburban, and angry — that Democrats see as critical to picking off enough congressional districts this November to take control of the U.S. House.

Districts like Coffman's are at the front lines of a rising "blue wave." He is one of about two dozen Republicans representing a district Hillary Clinton carried in the 2016 presidential election. Barack Obama likewise won the suburban Denver district in both the 2008 and 2012 elections.

Despite that Democratic tilt to the district, Coffman has won re-election four times.

President Trump's unpopularity, and an unusually mobilized Democratic base for a midterm election year, once again put Coffman at the top of Democrats' target list for 2018.

The gun debate has particular resonance here. A few miles away is where the Columbine School shooting occurred in 1999. Coffman's district includes the Aurora movie theater where 12 were killed in a 2012 mass shooting. 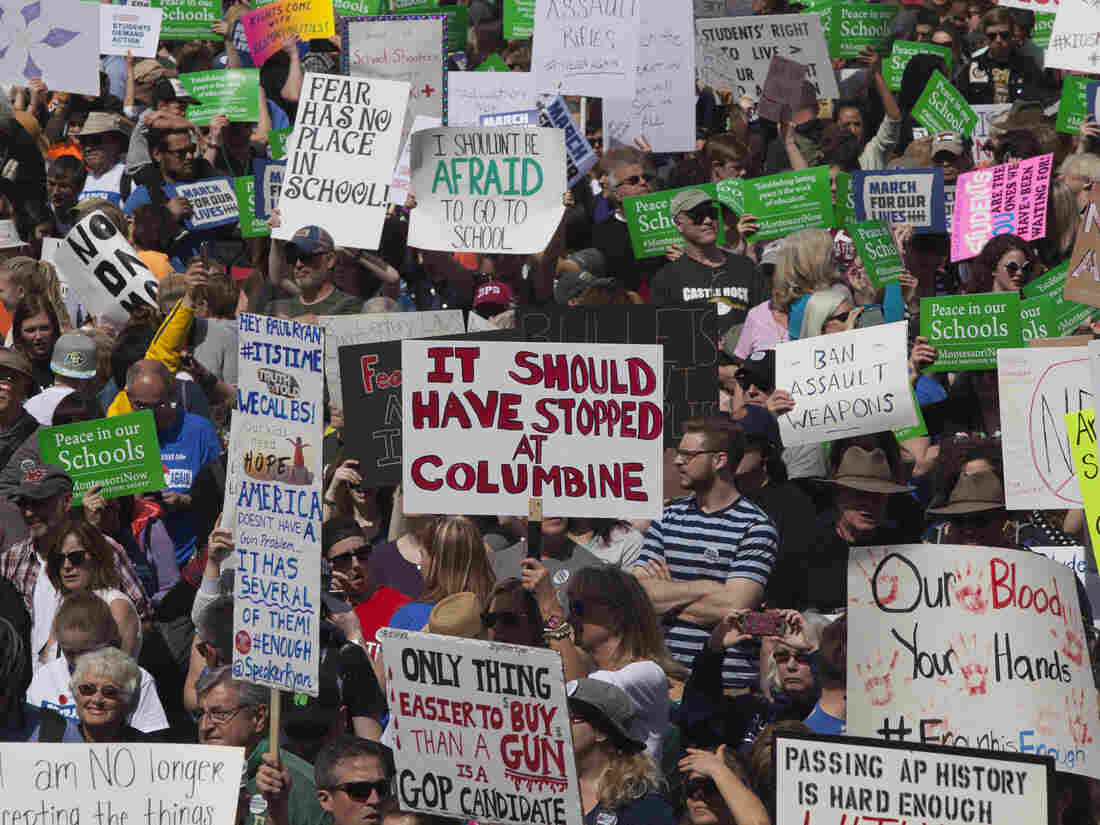 Thousands of people participate in the March for Our Lives rally on March 24 in Denver. Some Democratic candidates in Colorado are campaigning for office on a platform of stricter gun laws. Ross Taylor/Getty Images hide caption 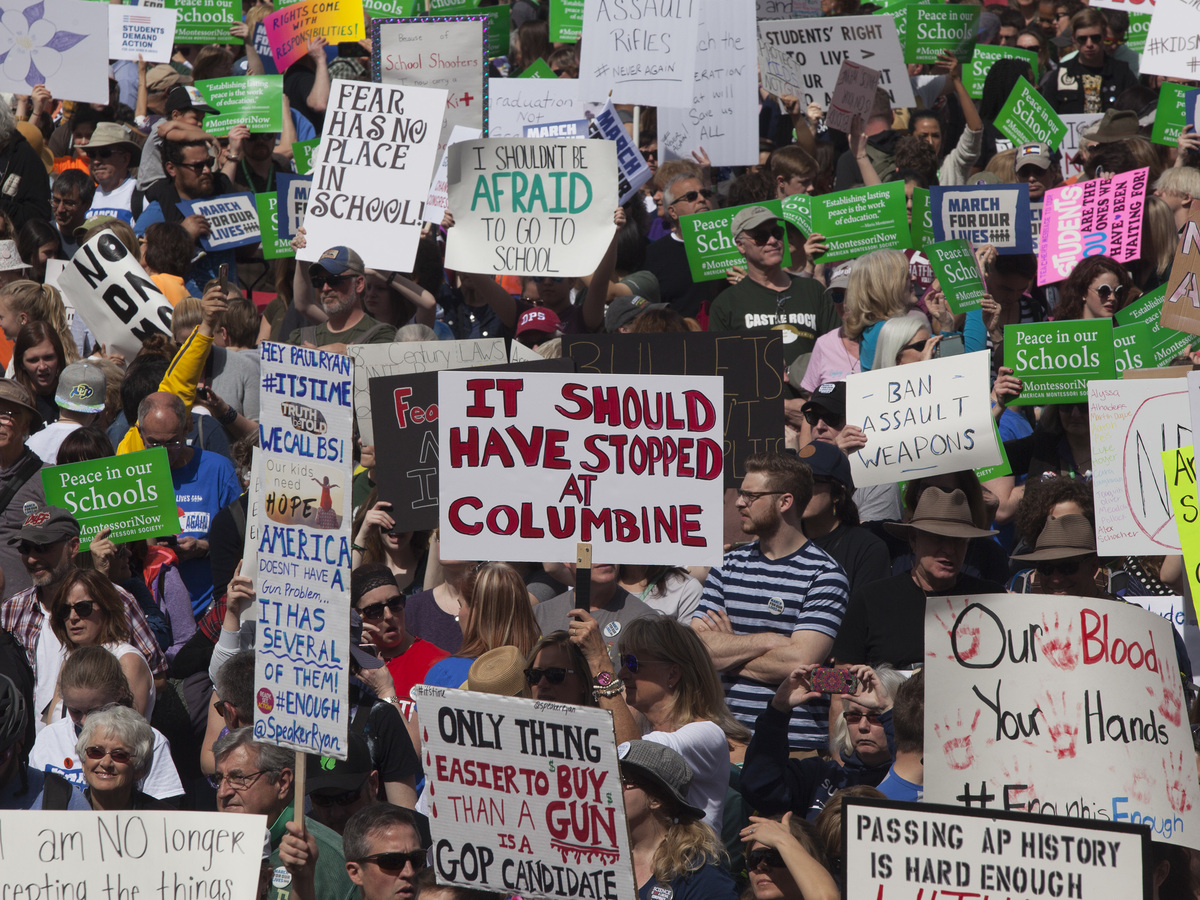 Thousands of people participate in the March for Our Lives rally on March 24 in Denver. Some Democratic candidates in Colorado are campaigning for office on a platform of stricter gun laws.

For Ashley Kochkanyan, a stay-at-home mom who lives in the district, the gun debate this time has changed her mind. After the Columbine shooting in 1999, she joined a similar, but smaller, gun protest outside the Denver Capitol. "It was just a really somber quiet time, and I think that we were hoping something would happen then and it hasn't," said Kochkanyan, who attended Saturday's march 19 years later with her 11-year-old son. Kochkanyan says she voted for Coffman in the past, but she won't any longer.

Voters like her are why the leading Democratic candidate in the race, Jason Crow, is embracing support for tougher gun laws to win over voters like Kochkanyan. He chose guns as the first digital issue ad of his campaign. It's a notable break from recent elections, in which Democrats have shied away from making the gun debate a central focus of campaigns in competitive districts.

In an interview with NPR, Crow said he thinks Coffman is uniquely vulnerable this year because of those two factors unique to 2018: President Trump and a shifting debate on guns.

"People see what Donald Trump and his presidency are doing to this country and to our community. Mike Coffman is a rubber stamp for him. They've had enough," Crow said, "They've had enough of his support by the NRA and his inaction on gun violence in this community that's been scarred by it, and they want change."

Crow is polling competitively, and he has some built-in advantages. Democrats outnumber Republicans here. He's a young political newcomer with no voting record to attack, and as a lawyer and military veteran he has a natural appeal to the district's white, affluent college-educated suburbanites.

Chipping away at Coffman's support among the district's diverse minority groups that make up more than one-third of the population here, may not be as easy.

Few Republicans represent districts as ethnically and racially diverse as Colorado's 6th Congressional District, which is home to one of the nation's largest communities of Ethiopian immigrants.

"Quite honestly there has not been anyone, any elected official that has worked as hard for the Ethiopian community as Mike Coffman, that's just the truth," Asfaw said.

He said his community largely supports more gun control, but it's not just a driving issue compared to others. Instead, Ethiopian-Americans are pressing Congress to act on a resolution condemning human rights abuses back in Ethiopia. Coffman co-authored the resolution, which recently passed the House Foreign Affairs Committee, and is scheduled for a full House vote when lawmakers return from the two-week spring recess.

Even as the national climate turns against Republicans, Coffman still has a deep reservoir of support from local communities like this one because of his close attention to their concerns.

In an interview with NPR, Coffman says his relationship to his district's many diverse communities has helped him defy the electoral odds in what is increasingly Democratic terrain.

"I've turned what was designed to be an adverse situation for me, in terms of diversity of this district and the performance of this district, I think, into a positive," he said.

Even Democratic critics like Jason Crow don't dispute Coffman's outreach. "He's gone out and he's shown up repeatedly to these communities and you know, that's fine," he said, "But we're now in an environment where leading means more than showing up."

Coffman believes showing up will matter. On a recent Sunday in February, his schedule included stops at a mosque, a Korean church, a Hindu festival and a Taiwanese Lantern Festival. "Then I had a tutorial in Spanish that evening. I have every Sunday a tutor that comes in for two hours," he said.

He started learning Spanish about four years ago, when the 2011 round of redistricting put him in a district with more Hispanics as part of a Democratic attempt to unseat Coffman. Since then, he has debated campaign opponents in Spanish, and appears every Friday on Spanish talk radio that serves the district's Hispanic community.

It's that level of motivation — and a willingness to moderate his prior political views — that has led a 63-year-old, military veteran, white, Republican male to cultivate relationships in minority communities that historically lean Democratic.

His GOP colleagues regularly point to Coffman as one of their best, battle-tested incumbents. His campaign boasts of a work ethic that often includes 100-hour work weeks, a 24/7 campaign mentality, and personal discipline that includes a 500 push-up-a-day regimen.

While his views on guns have not moderated, he has opposed his party's efforts to repeal the Affordable Care Act and is a vocal critic of his party's often harsh rhetoric and policies towards immigrants.

On Monday, he visited with Colorado Chinese News President Wendy Chao, whose foreign language newspaper reaches about 45,000 Coloradans. She greeted the congressman as "my best friend."

"This is from my heart, I will say: Congressman Michael Coffman is the only one who really care our Asian community, minority community, you know?" she said, citing a two-decade long friendship dating back to his time in state office. Coffman shows up, Chao says, and not just in election years.

In this district where at least 120 languages are spoken, the deciding question for voters this November may not simply be about Trump's approval rating or gun rights, but rather the answer to the question: Who speaks for me?

A previous version of this story said Mike Coffman was re-elected five times. He has been re-elected four times since his initial election in 2008.