Accessibility links
Why The Iconic Marlboro Man Image Is Fading In The West A lot of cowboys built up a their stock on U.S. public lands. But today the number of actual independent cattlemen working on these lands is dropping. 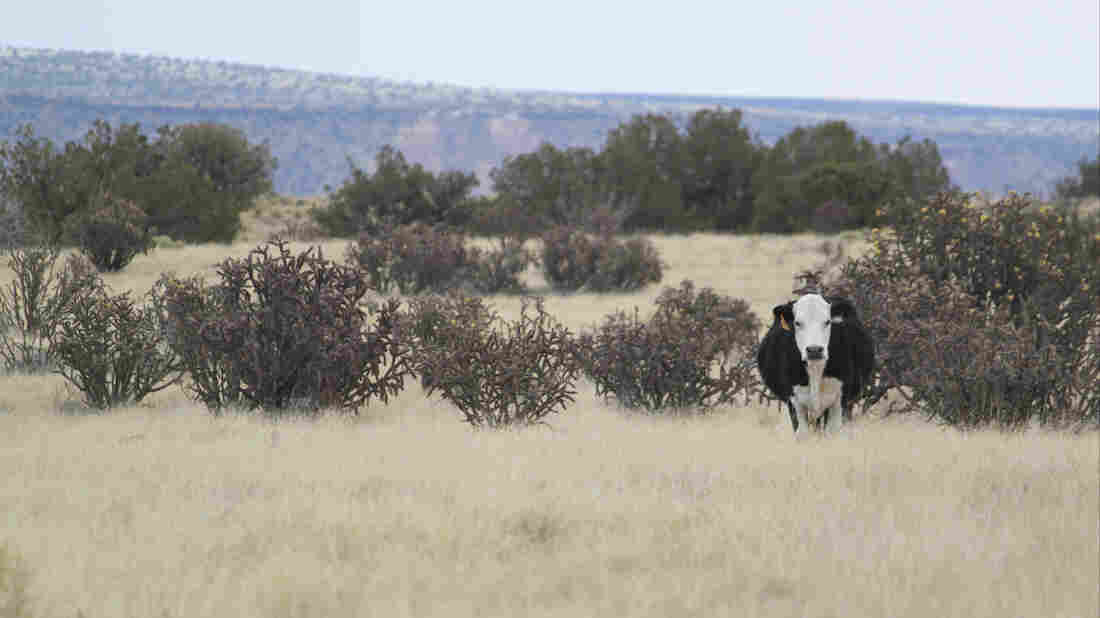 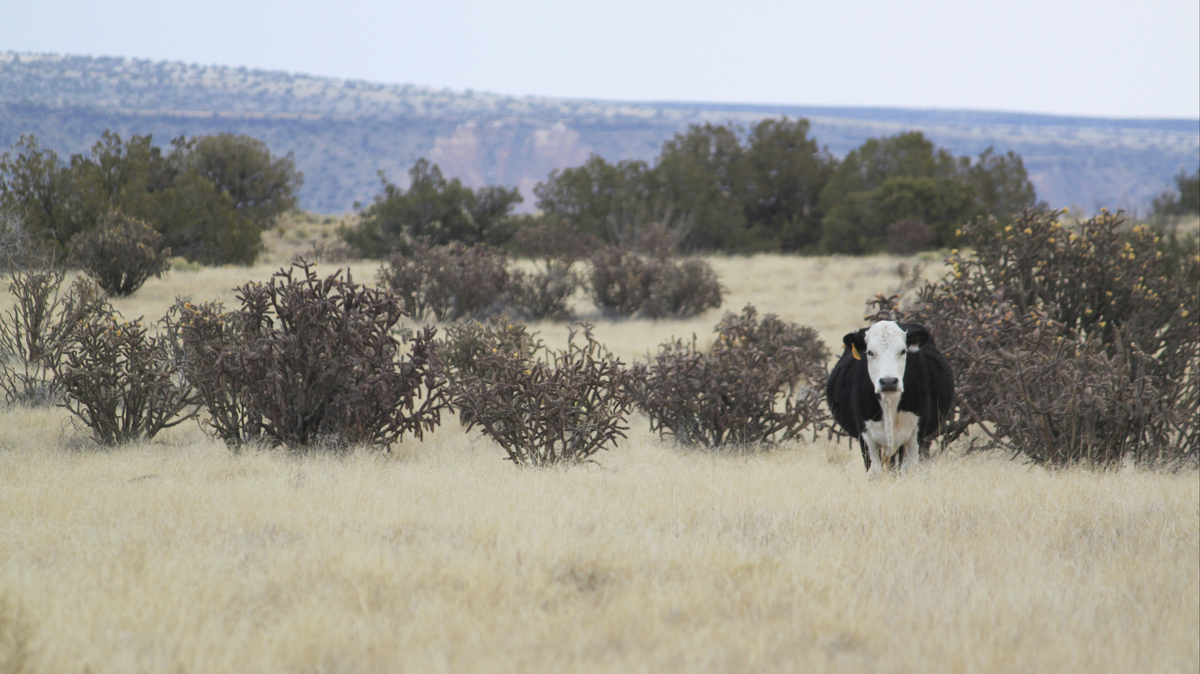 A cow grazes a stretch of open range north of Albuquerque, N.M.

Terry Lewis has probably ridden every trail, gully and meadow you can find in the mountains around his boyhood home of Weed, N.M.

"It's harder to get to know our country, if you don't do it on horseback," Lewis says.

Lewis, 74, is bouncing along a dirt road in a worn pickup, certainly not his preferred mode of travel in this high altitude island of tree-covered mountains that towers over the harsh southern New Mexico desert. Lewis recalls a time when he'd cover two or three times as much ground on horseback, riding to his old summer ranges here.

"People don't ride as much as they used to," Lewis says.

Today you're more likely to encounter an ATV rider or camper or hunter than a cattleman tending to his beef cows. It's not like it used to be when Lewis was growing up and ranchers ruled the range in this corner of the West.

"I taught school for a year and a half," says Lewis, who moved away from this area briefly when he was younger to get a math degree. "But it wasn't what I wanted to do, it ties me down, I want to live in the outdoors."

Decline In Hunters Threatens How U.S. Pays For Conservation

In many ways, Terry Lewis fits that iconic image of the independent cowboy riding the West's vast, publicly-owned ranges. That image is woven tightly into American folklore and identity. A lot of cowboys built up their stock on U.S. public lands. But today the number of actual independent cattlemen working on these lands is dropping.

A few years back, Lewis says he was forced to sell his cows. He couldn't afford to stay in business. The same goes for many of his friends and former classmates.

"The way I have been able to do my life and own a ranch, I think that's gone for people like us now," he says.

There are so many reasons for the decline: corporate consolidation of the cattle industry, drought, global economics to name a few. Today around Weed, there are only a few ranchers left trying to scratch out a living. Many who remain in business will tell you they feel like they're being squeezed off the land by economics and a changing culture, but also environmental laws such as the Endangered Species Act.

Stone says when President Trump was elected, ranchers were hopeful that he'd help the small, independent cattlemen. The administration is rolling back a lot of regulations. But out on the ground, far away from the politics of the beltway, the cattlemen's optimism is fading.

"We can't tell there's been an administrative change at the district and the regional level," Stone says.

Like in most western states, there's more public land in New Mexico than there is private. Many ranchers don't own much actual land themselves so they lease federal public land from the government for grazing. One reason for all the anxiety is that the amount of land open to grazing has been cut steadily, by one closely watched estimate, down by more than half since the 1950s. Environmentalists like Matthew Koehler of the WildWest Institute want to see that drop even further. 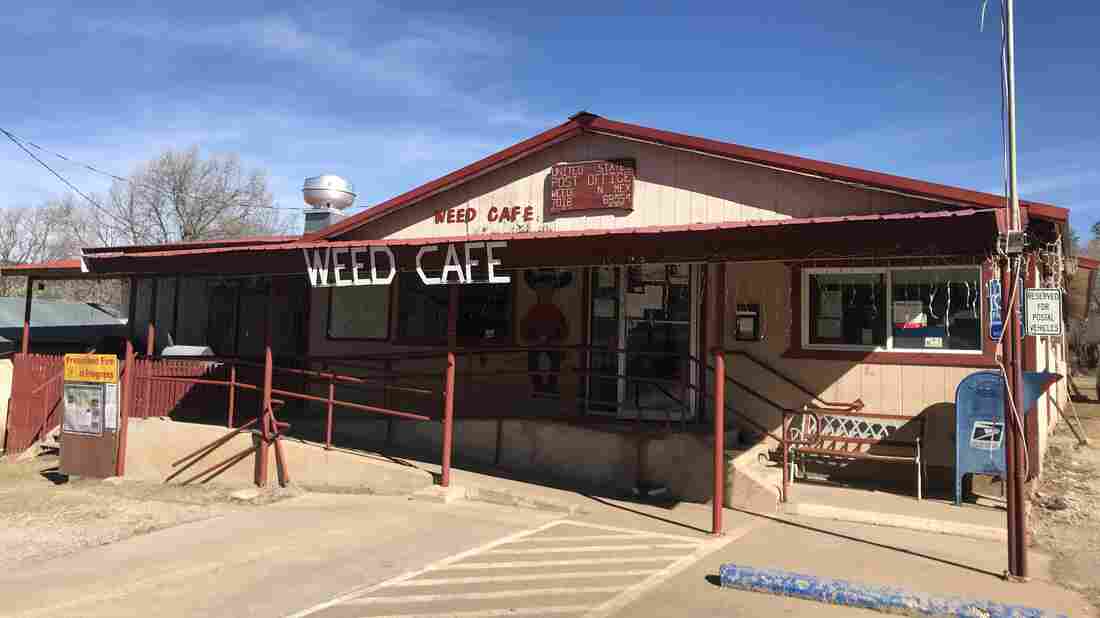 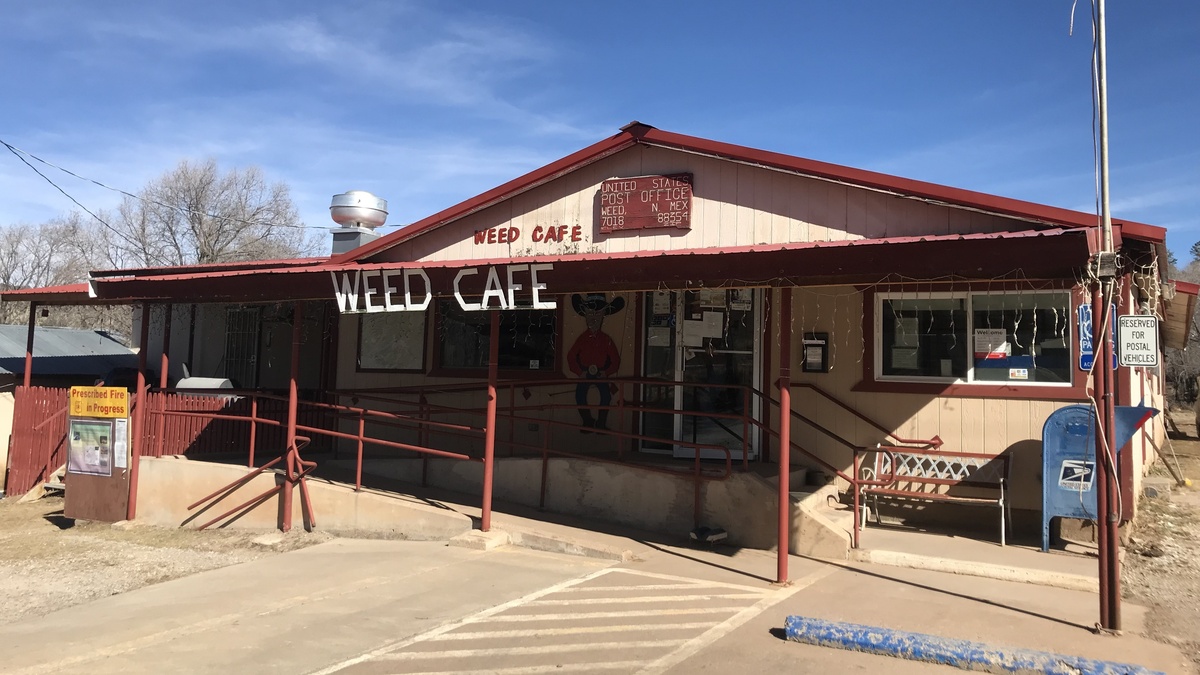 Many residents left Weed, N.M. starting in the 1980s when the sawmills closed. Today the few ranching families left say their livelihoods are threatened.

"As an elk hunter and a deer hunter myself, I can tell you that cows and sheep wreak havoc on our public lands," Koehler says.

Koehler says ranching is simply more efficient on private land in states like Texas and the Midwest that have a lot more grass. Over time, the livestock industry has shifted in this direction too. Not even a fifth of all of the beef raised in the U.S. comes from western public lands today. But many environmentalists argue the cattlemen on public lands still get outsized attention and a lot of political clout.

"I think some of it is the mystique of the Marlboro man and the cowboy and his cows," says Koehler. "I think it pulls at a lot of heart strings of people, even people living in more urban areas."

Old time ranchers may conjure up this iconic image in our minds. But a lot of the smaller ones today are worried about becoming irrelevant.

And that's the tension. Like Terry Lewis, Gary Stone too couldn't afford to stay in the business himself, so he started working as a foreman on another man's ranch.

"It should be managed better," Stone says. "There should not be an agenda to discontinue grazing."

Here on the Lincoln National Forest, which issues the grazing leases to local ranchers, the chief land manager, Travis Moseley, dismisses that as conspiracy theory.

"I would be breaking the law," Moseley says. "Livestock grazing is a recognized use of national forest systems and until that law changes, it's my job to facilitate that use."

"Multiple use" federal agencies like the U.S. Forest Service or the Bureau of Land Management are often seen as having competing – and sometimes contradictory – missions. How do you promote industry development while also managing for pristine public lands, the argument often goes. Moseley thinks a balance is possible. He also agrees that public lands ranchers are getting squeezed, just not due to stricter environmental laws. He blames an explosion of recreation on public lands recently: hikers and campers, hunters, off-road vehicle enthusiasts clashing with cattle herds and endangered critters.

Fights over public lands have always been controversial in the West. There are still old wounds here over the "cattle free by 93" environmentalist campaigns against public lands grazing during the Clinton administration. Today, with even more people and pressures on the land, the fights over who should be able to do what, seem to be getting even tenser, with some spilling over into armed standoffs.

"It feels like there's more polarization and less tolerance for each other's interest in how they use the national forest whether it's for wildlife viewing or livestock grazing," Moseley says.

In New Mexico, the ranchers' frustrations are a slice of some of the broader economic anxieties you see in rural America right now.

Their world is changing fast. What's happening in and around the tiny hamlet of Weed is an all too familiar tale for rural western towns that sprung up around a once reliable supply of lush range land and timber.

"There's not any jobs to draw people to come in, the young ones especially," says Shirley Stone, 83, who helps run the Weed General Store and used to be the town's postmaster. 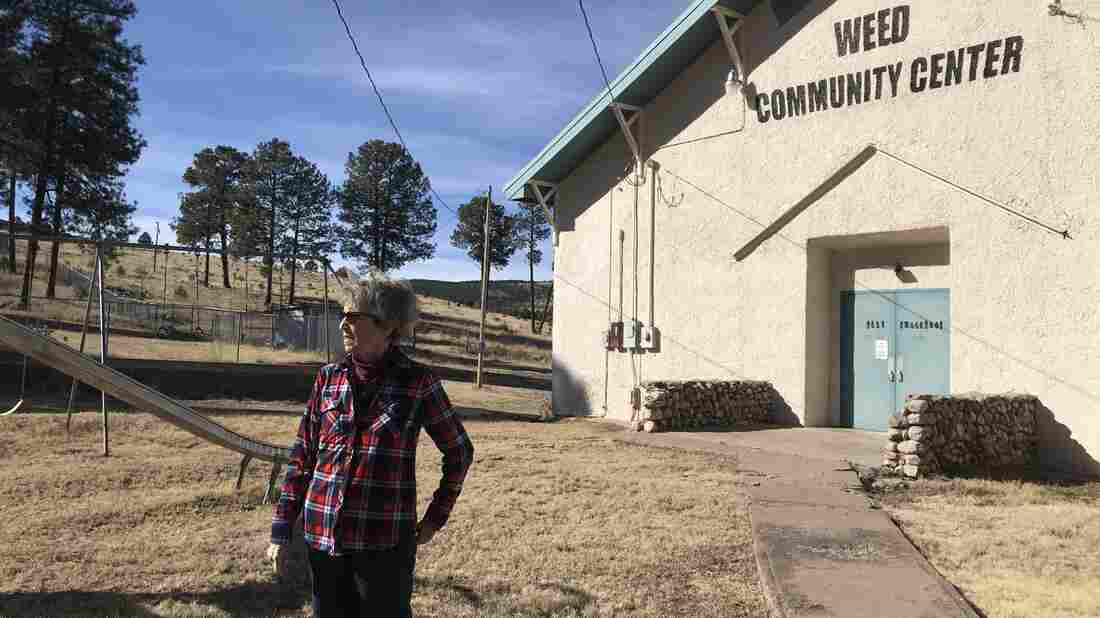 Shirley Stone, 83, remembers when her hometown of Weed, N.M. was a thriving rural community. Today all the sawmills have closed, so did the school. Most ranching families like hers have had to leave. Kirk Siegler/NPR hide caption 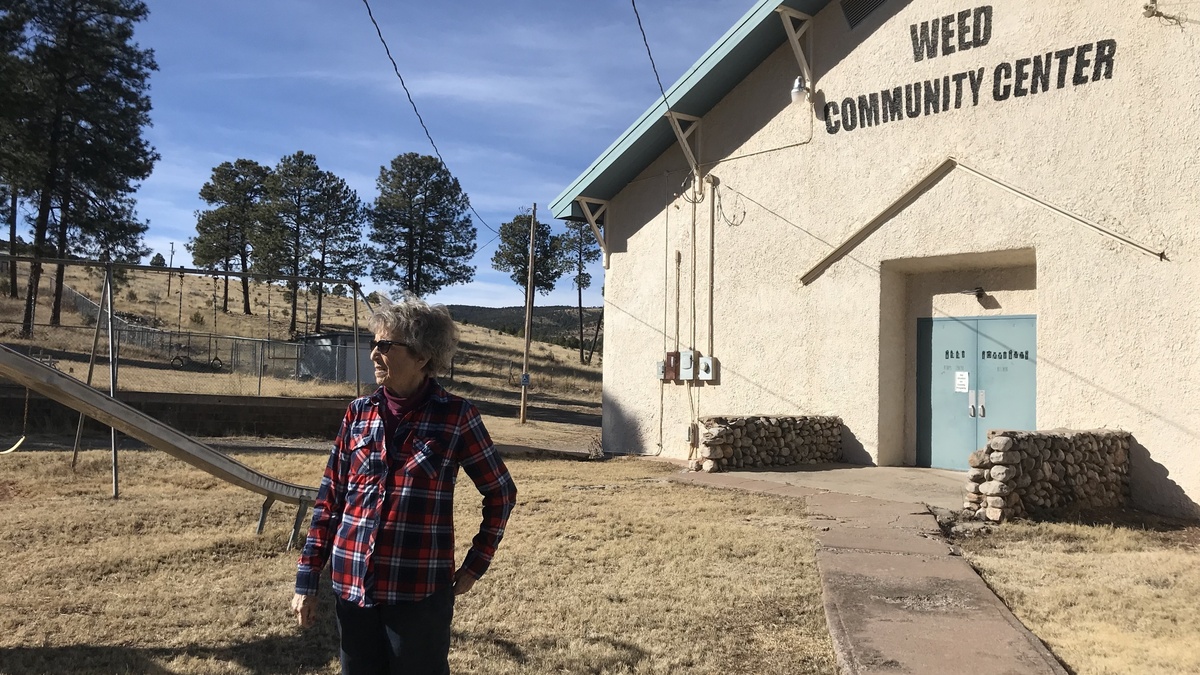 Shirley Stone, 83, remembers when her hometown of Weed, N.M. was a thriving rural community. Today all the sawmills have closed, so did the school. Most ranching families like hers have had to leave.

Shirley Stone is Gary's mom. She remembers when Weed was a thriving town with hundreds of people working in the lumber and ranching industries. Today, the sawmills have closed. The school was shut down in 1992.

"About all we have left is the post office and the café," Stone says.

In one room of the old high school, Shirley Stone has set up a community library. In another, there is a make-shift museum, its walls lined with old high school basketball photos and state tournament trophies. The gym goes mostly unused.

Folks worry that if the last of the cattlemen go, so goes what's left of their tight-knit little community.