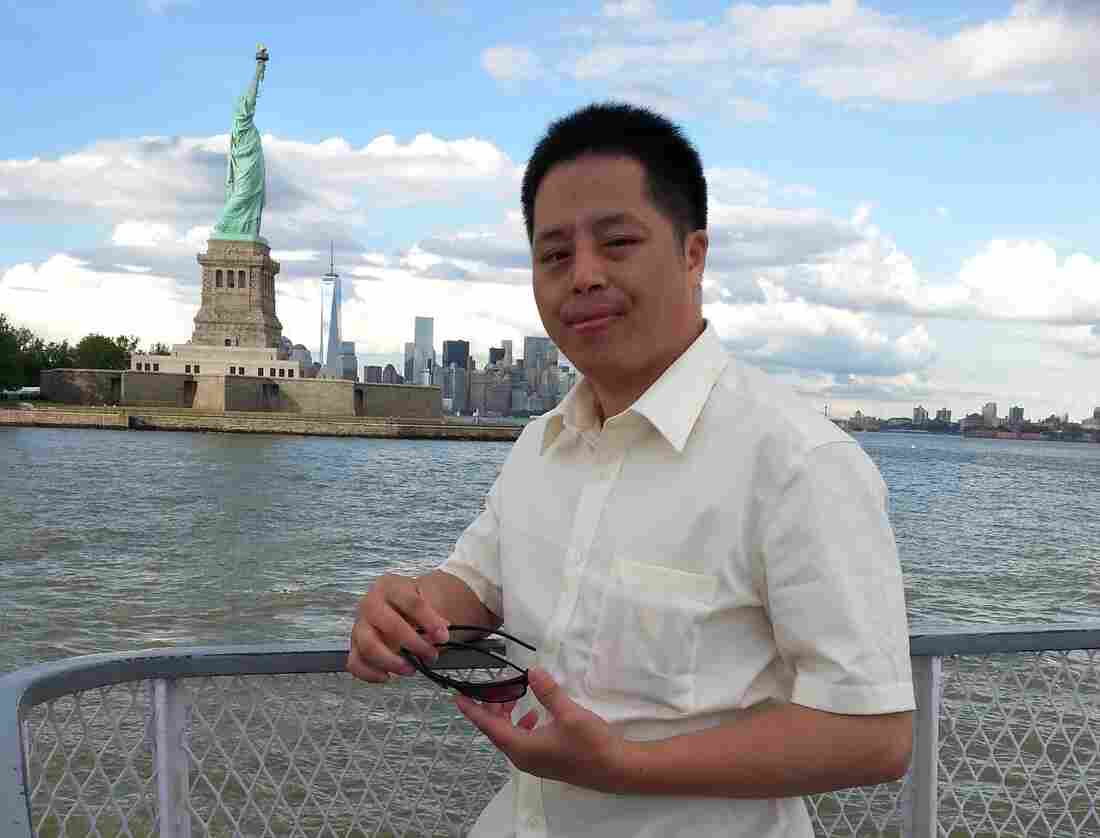 Zhuang Liehong is one of many Chinese immigrants who's made his home in the Flushing neighborhood of Queens, N.Y. Zhuang came to the U.S. seeking asylum from his village in China. Courtesy of Zhuang Liehong hide caption 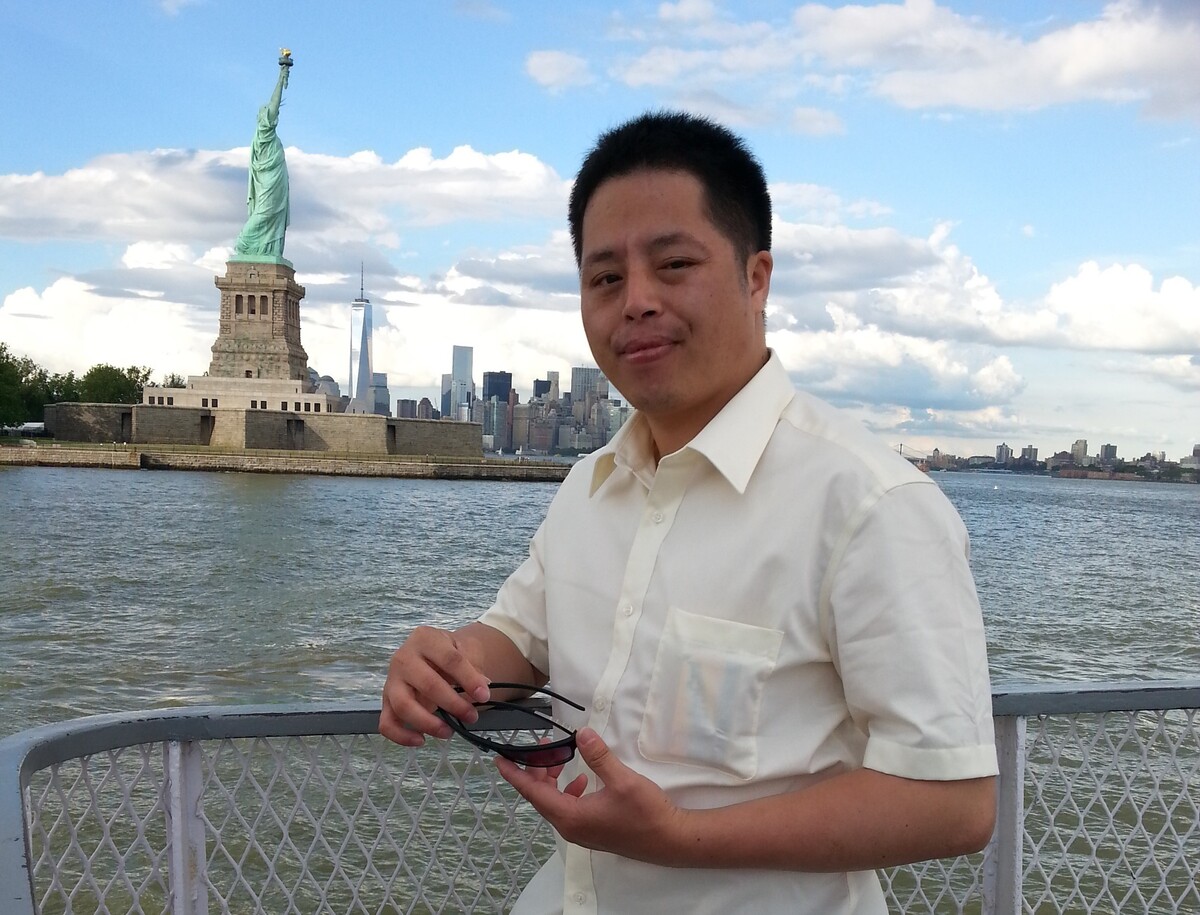 Zhuang Liehong is one of many Chinese immigrants who's made his home in the Flushing neighborhood of Queens, N.Y. Zhuang came to the U.S. seeking asylum from his village in China.

The Flushing neighborhood of New York's Queens borough is home to the largest population of Chinese immigrants in any city outside Asia.

Zhuang Liehong is one of those immigrants. He arrived in 2014 from Wukan, a small village in the Guangdong province of southern China.

When he first arrived in Flushing, he says it felt like a city in China.

"Other than the buildings and Chinese store signs, just look at the pedestrians on the streets," he says. "They're mainly Chinese people."

As much as Flushing felt like China, Zhuang says there are some things that make it clear it's not China.

"Here in Flushing, there are signs for the Democratic Party. On street corners, there are supporters with brochures," Zhuang says. "There are also Christian people doing outreach in the streets. All of this doesn't exist in China. It's not possible."

In 2014, Zhuang fled Wukan just as the Chinese government was cracking down on protests there. The people of Wukan were demonstrating against government officials for selling communal land to developers.

People close to him were hauled away to prison. He also says one of his friends died under police custody.

Zhuang knew he needed to leave China, and he set his sights — as many immigrants do — on New York City.

He and his wife, Little Yan, devised a plan to sneak into the country as part of a tour group. Once the tour group got to the U.S., the couple quietly broke away and hopped a flight to New York. 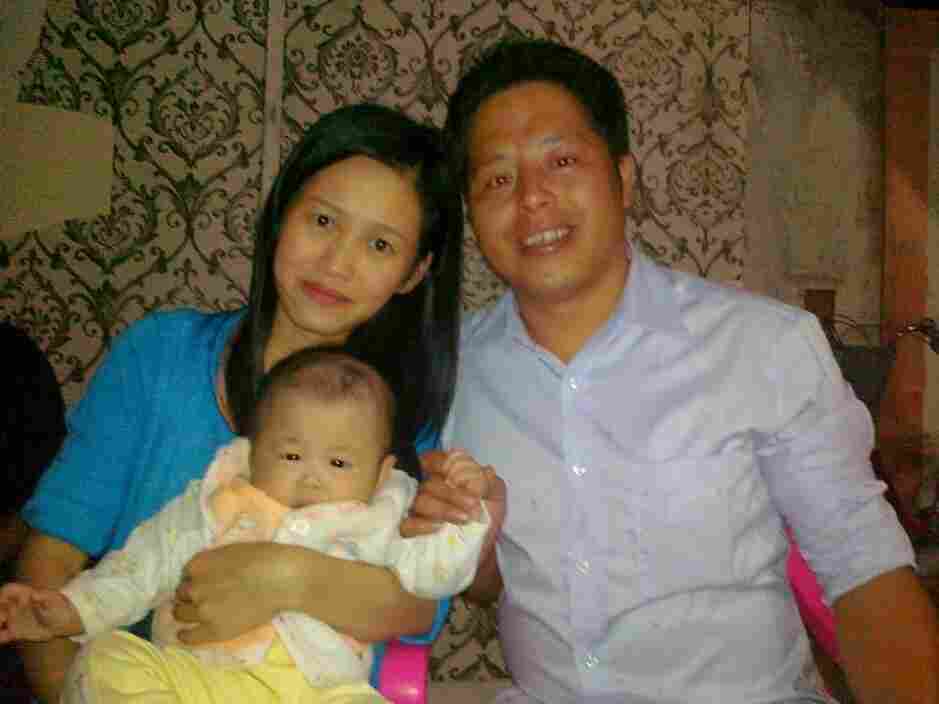 Zhuang Liehong with his wife, Little Yan, and one of his sons, Kaizhi, in 2013 — a year before immigrating to the United States. Courtesy of Zhuang Liehong hide caption 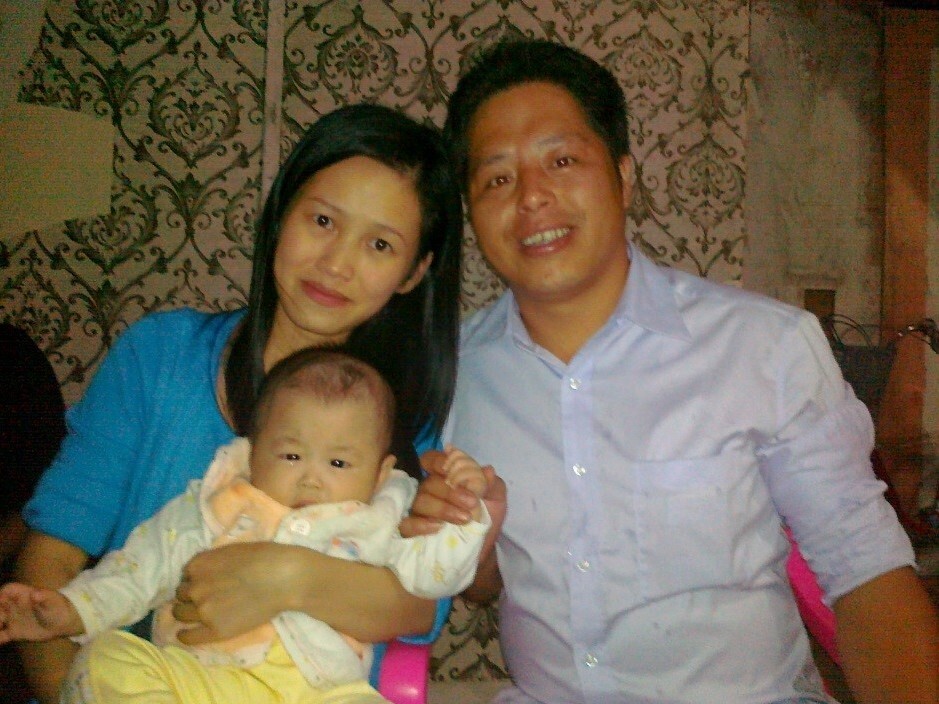 Zhuang Liehong with his wife, Little Yan, and one of his sons, Kaizhi, in 2013 — a year before immigrating to the United States.

At the time Zhuang knew only one person in New York: Lauren Hilgers, a journalist who had visited Wukan to report on the uprisings.

Hilgers is the author of the new book Patriot Number One: American Dreams in Chinatown, in which Zhuang is the central character.

"As soon as he got to my house he was very intent on getting to Flushing and starting a life, and — he had all of these goals," Hilgers says. "He wasn't going to stay at my house forever."

Hilgers was right; today Zhuang has a place of his own in Flushing. Though it's on a middle-class, suburban-looking street — manicured front lawns, leafy sidewalks, driveways — Zhuang's family home is a bit less idyllic.

He, his wife and their two young sons are crammed into a basement, sleeping together in one small bedroom. They share a bathroom and a tiny kitchen with two other people, who also rent space down there. There's scarcely room to move around, but Zhuang insists on certain dignities when people visit, like brewing tea.

"We have this traditional virtue of becoming friends through drinking tea," he says. "So whenever a friend arrives, you have to make tea for them."

Zhuang came to the U.S. for political reasons more than economic ones, and he says that he wasn't hoping to be given "preferential treatment" when he got here.

As Hilgers says in her book, Chinese people apply for and receive asylum more often than any other group of immigrants in the U.S. She says there are many reasons for that, including some that are political, like Zhuang's.

"There's a lot of sympathy for Chinese people because the reasons that they apply with asylum have to do with forced abortions, the one-child policy which strikes quite a chord here," Hilgers says, referencing population-control measures that were eased in 2016. "Political trouble, which I think after Tiananmen Square also was very well-publicized here."

But even though Zhuang and his family were granted asylum, he had difficulty adapting, as Little Yan was able to go out and get a job while he couldn't work. This went against a traditional Chinese idea and initially made him feel uncomfortable.

The Economics Behind China's Crackdown On Civil Society

The Economics Behind China's Crackdown On Civil Society

"In America, it's very difficult for a man without skills to find a job," he says. "To solely rely on her to work, I didn't feel good either."

But Hilgers says it's common for men and women to exchange roles when it comes to earning money for their family after immigrating.

"I kind of understand this to be almost a trope of immigration," she says. "These sort of women that do backbreaking work, and support the family and are really practical. A lot of times, men will go out and work in restaurants outside of the city, women will stay here and work, so I think women really shape the community."

Zhuang now has a job that keeps him busy: driving for Uber. Though he once measured success by the political impact he had, he now has a different definition. Now being successful for him is "to have my own stable life, for my family. We don't necessarily need to be rich," he says.

But Zhuang still thinks about Wukan and the state of life there.

"In Wukan, there is no democracy, rule of law, freedom, and equality. Wukan needs this and the whole China needs to have it," he says. "If China doesn't change its policies, Wukan will never truly have free rule of law, democracy and equal society, good village."

Until that happens, Zhuang says he cannot say that he's succeeded politically.

A previous version of this story misquoted Zhuang Liehong as defining success as needing to be rich. He actually said: "We don't necessarily need to be rich."